Current Hypothesis for the Relationship between Dietary Rice Bran Intake, the Intestinal Microbiota and Colorectal Cancer Prevention
Next Article in Special Issue

The goal of the present study was to quantify the rate and extent of polyphenols released in the gastrointestinal tract (GIT) from natural (NS) and blanched (BS) almond skins. A dynamic gastric model of digestion which provides a realistic simulation of the human stomach was used. In order to establish the effect of a food matrix on polyphenols bioaccessibility, NS and BS were either digested in water (WT) or incorporated into home-made biscuits (HB), crisp-bread (CB) and full-fat milk (FM). Phenolic acids were the most bioaccessible class (68.5% release from NS and 64.7% from BS). WT increased the release of flavan-3-ols (p < 0.05) and flavonols (p < 0.05) from NS after gastric plus duodenal digestion, whereas CB and HB were better vehicles for BS. FM lowered the % recovery of polyphenols, the free total phenols and the antioxidant status in the digestion medium, indicating that phenolic compounds could bind protein present in the food matrix. The release of bioactives from almond skins could explain the beneficial effects associated with almond consumption.
Keywords: almond skin; food matrix; simulated human digestion; polyphenols; bioaccessibility almond skin; food matrix; simulated human digestion; polyphenols; bioaccessibility

The presence of polyphenols in almond skin has been related to several health benefits associated with almond (Prunus dulcis Miller D.A. Webb) consumption [1,2,3]. The antioxidant and free-radical scavenging activity of almond skin polyphenols has been reported [4]. It has been shown that flavonoids and phenolic acids, including flavonols, flavanols, flavanones and simple phenolic acids identified in almond skins may play a role in reducing risk factors against chronic inflammatory diseases and ageing disorders [5,6]. A range of biological effects of flavonoids, including anticancer, antiviral, antimutagenic and anti-inflammatory activities, have been reported [7,8]. Nevertheless, one of the major limiting factors affecting the beneficial effects of polyphenols is their bioaccessibility and subsequent absorption in the gastrointestinal tract (GIT), together with their bio-transformation by the gut microbiota enzymes [9].
This process depends on the physico-chemical properties of the food matrix and its changes during digestion. We refer to bioaccessibility as the proportion of a nutrient or phytochemical compound ‘released’ from a complex food matrix during digestion and therefore becoming potentially available for absorption in the GIT. A number of studies have reported that food matrix affects polyphenol release in the gut as well as the efficacy by which they are transported across the mucosal epithelium [10,11]. The presence of a food matrix (muffin) decreased the bioaccessibility of certain bioactive compounds, such as protocatechuic acid and luteolin, from raw shelled and roasted salted pistachios during simulated human digestion [12]. Interaction with other food nutrients and the formation of complexes mainly with protein and fat is also known to affect bioaccessibility of phenolic acids [13]. The influence of digestion conditions, such as pH, temperature, bile salts, gastric and pancreatic enzymes on the bioaccessibility of certain polyphenols has been reported [14,15]. Milk has been found to affect bioaccessibility of epicatechin metabolites [16]. We have previously identified a combination of flavonols, flavan-3-ols, hydroxybenzoic acids and flavanones present in almond skin [1]: the major flavonoids were (+)-catechin, (−)-epicatechin, kaempferol and isorhamnetin, both as aglycones or conjugated with rhamnose (Rha) and glucose (Glc). The total phenolic content, expressed as mg gallic acid equivalents (GAE) per 100 g of fresh skin, was higher in natural almond skin (NS, 3474.1 ± 239.8) than blanched almond skin (BS, 278.9 ± 12.0). The blanching process is known to remove most of the water-soluble flavonoids and other polyphenols [1]. BS, obtained by industrial blanching, currently represents a commercially available product. Our previous investigation on the release of almond skin polyphenols during simulated human digestion using a static model demonstrated higher percentages of polyphenols released from NS compared to BS [17].
The aim of the present study was to assess the effect of a range of food matrices on the rate and extent of polyphenol bioaccessibility from NS and BS during simulated human digestion. A dynamic gastric model (DGM) was used to simulate the human stomach [12,18]. Gastric digesta were then subjected to a duodenal phase in order to simulate the full human upper GIT.

2.6. Poliphenols Extraction from Samples before and after Dynamic in Vitro Digestion

All original samples (WT, HB, CB and FM containing NS or BS) and aliquotes obtained from each sample subjected to a dynamic in vitro gastric digestion (NSWT G, NSHB G, NSCB G, NSFM G, BSWT G, BSHB G, BSCB G, BSFM G) and gastric plus duodenal digestion (NSWT G + D, NSHB G + D, NSCB G + D, NSFM G + D, BSWT G + D, BSHB G + D, BSCB G + D, BSFM G + D), were harvested and centrifuged to separate the residual material from the supernatant. The volume of each supernatant was measured; the residues were dried in a forced air heated oven (T °C < 40 °C) and brought to constant weight.
Each residue was extracted with hexane (1:5, w/v) to remove the lipid fraction. The procedure was repeated 3 times. Afterwards it was extracted with a methanol/water mixture (70:30) (1:10, w/v) by shaking for 5 min and sonicating for 10 min. After centrifugation at 12,074 rcf for 10 min, the supernatant was collected. The procedure was repeated 3 times. The supernatants were pooled. In order to precipitate proteins, MeOH (8 mL) and 2M NaOH (600 µL) were added in 10 mL extract. Samples were stirred vigorously and after centrifugation at 5916 rcf for 5 min the supernatant was brought to dryness in a rotavapor. Finally, the residue was resuspended with 10 mL of 1% HCl in MeOH and extracted, using a separatory funnel, with the same volume of ethyl acetate. The extraction was repeated 4 times. The ethyl acetate fractions were combined and evaporated to dryness in a rotavapor. The residue was weighed, solubilised in MeOH, filtered through a Nalgene 0.22 μM nylon filter and subjected to total phenol, radical scavenging activity and HPLC analysis.
For NS and BS digested in water no protein precipitation step was perfermed, given that they were not incorporated into any food matrix.

Total phenol content was determined colorimetrically by the Folin-Ciocalteu method as modified by Singleton, Orthofer and Lamuela-Raventos [19] using gallic acid as a reference compound. Total phenol content was expressed as mg of gallic acid equivalents (GAE) per 100 g of sample. The anti-radical activity was determined using the stable 2,2-diphenyl-1-picrylhydrazyl radical (DPPH) and the procedure previously described [20]. Results were expressed as mg of extract needed to scavenge 50 µmol of the initial DPPH concentration (SE50). The determination of phenolics and flavonoids was carried out using a Shimadzu high performance liquid chromatography system equipped with an UV–Vis photodiode-array detector (DAD) (SPD-M10AVP, Shimadzu, Kyoto, Japan) and a fluorescence detector (1046A Hewlett Packard, Palo Alto, CA, USA), as previously reported [17].

All assays were performed in triplicate and expressed as means ± standard deviation (SD). Data analysis was performed using ANOVA tests using SigmaPlot software version 12.0 for Windows (SPSS Inc., Hong Kong, China). To isolate the group or groups that differ from the others, a multiple comparison procedure (Tukey Test) was used. Results were considered statistically significant at p < 0.05.

The total phenolic content, measured by the Folin-Ciocalteu method, from all the tested meals during digestion is reported in Figure 4A,B. A decrease in the total phenols was observed post in vitro gastric and gastric plus duodenal digestion for both NS and BS in WT, HB, CB and FM. In agreement with the polyphenols release data, significant differences were observed across the four food matrices. A corresponding increase in free total phenols in the digestion medium, expressed as mg GAE/200 mL medium, was observed for WT, HB and CB (Figure 5). However, much lower than expected values of free total phenols were detected in FM, in agreement with the polyphenols recovery data. This data demonstrated that phenolic compounds could bind protein present in the food matrix, thus hindering the antioxidant potential in vitro [21].
In agreement with the total phenolic content, the radical scavenging activity, measured by DPPH, was lower after digestion (Figure 6). As shown in panel A, no statistically significant difference was observed in NS across all matrices; however in panel B, a statistically significant difference in WT vs. CB, HB and FM for sample 6 (last gastric sample) was observed. A corresponding increase of the antioxidant status was detected in the digestion medium, with the exception of FM; a statistically significant difference (p < 0.01) was observed in BS digestion media when comparing FM vs. WT, CB and HB and in NS when comparing FM vs. WT and CB (Figure 7).

In summary, the results of the present study indicate that the presence of a food matrix had a significant effect on polyphenol bioaccessibility from almond skin in both the gastric and duodenal environments. The dietary fiber present in almond skin may act as barrier to prevent a total release of phytochemicals during digestion. Further studies are warranted in order to investigate absorption of bioactives, which could explain the beneficial health effects associated with almond consumption.

We wish to dedicate the present study to our friend and colleague Antonio Tomaino, whose memory will always remain alive in our hearts. This research was funded by the Almond Board of California and the University of Messina (Research & Mobility 2015 Project, project code: RES_AND_MOB_2015_DE_LUCA). We gratefully thank Karen Lapsley from the Almond Board of California for providing the almond samples.

All authors contributed to the study design. D.T. is the Principal Investigator responsible for study design. G.M. designed the study and wrote the paper. M.V. and R.F. were responsible and performed the experiments of simulated gastric and duodenal digestion. M.M. and A.S. performed instrumental assessment and were responsible for data collection and data analysis; C.B. contributed to interpretation data. All authors approved the final version.

The work was partially funded by the Almond Board of California. 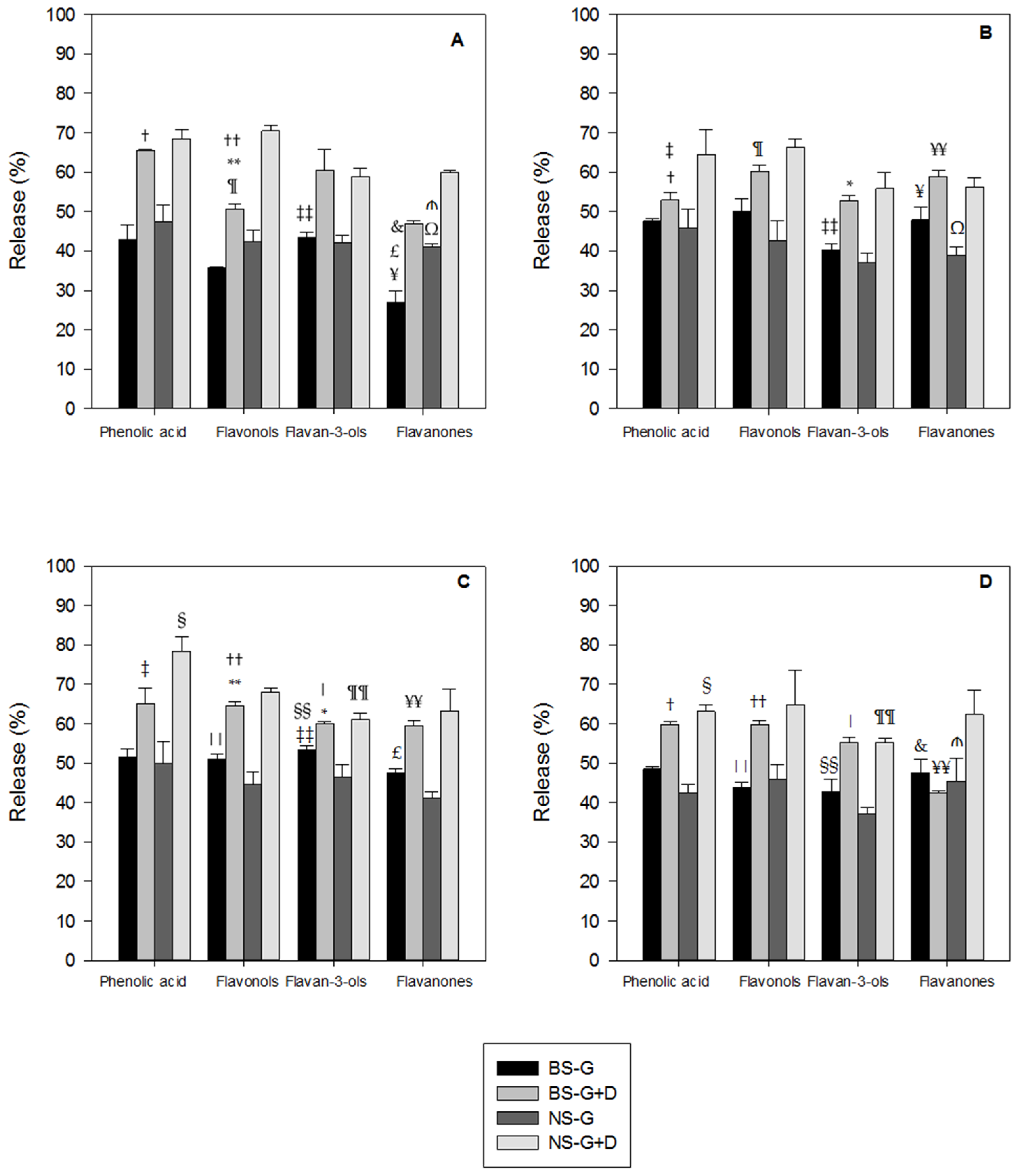 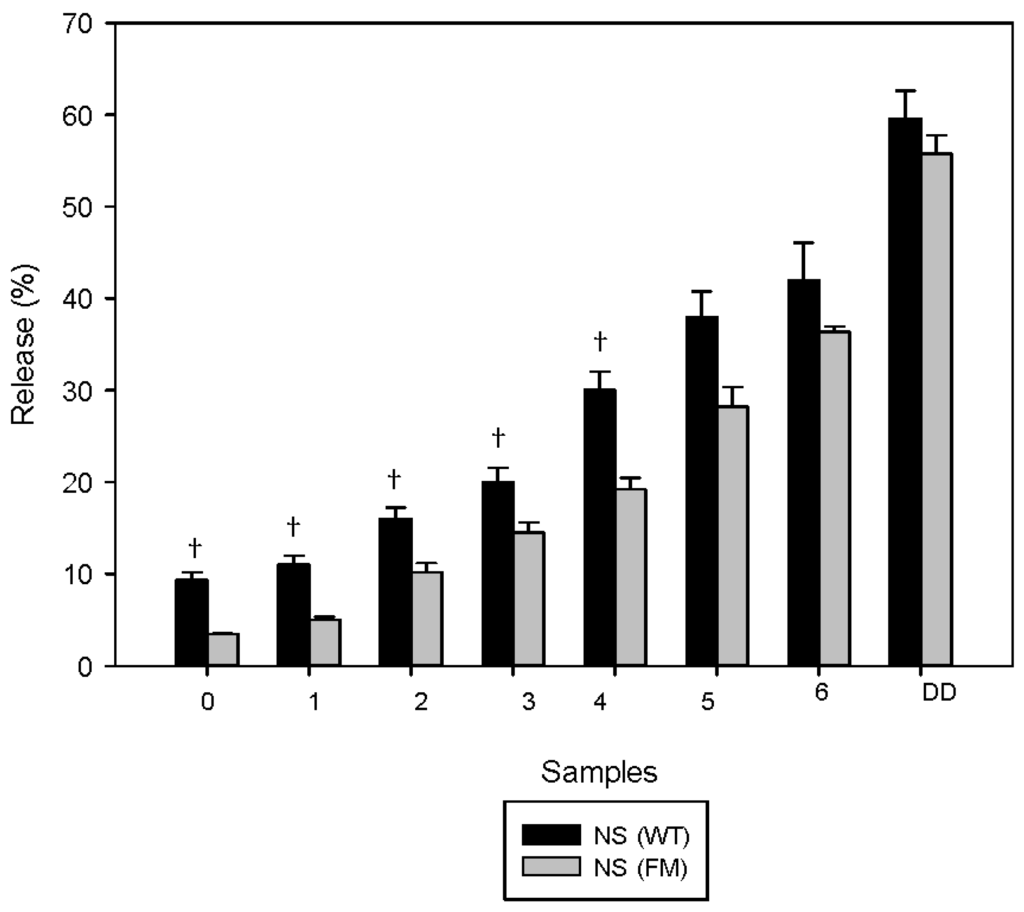 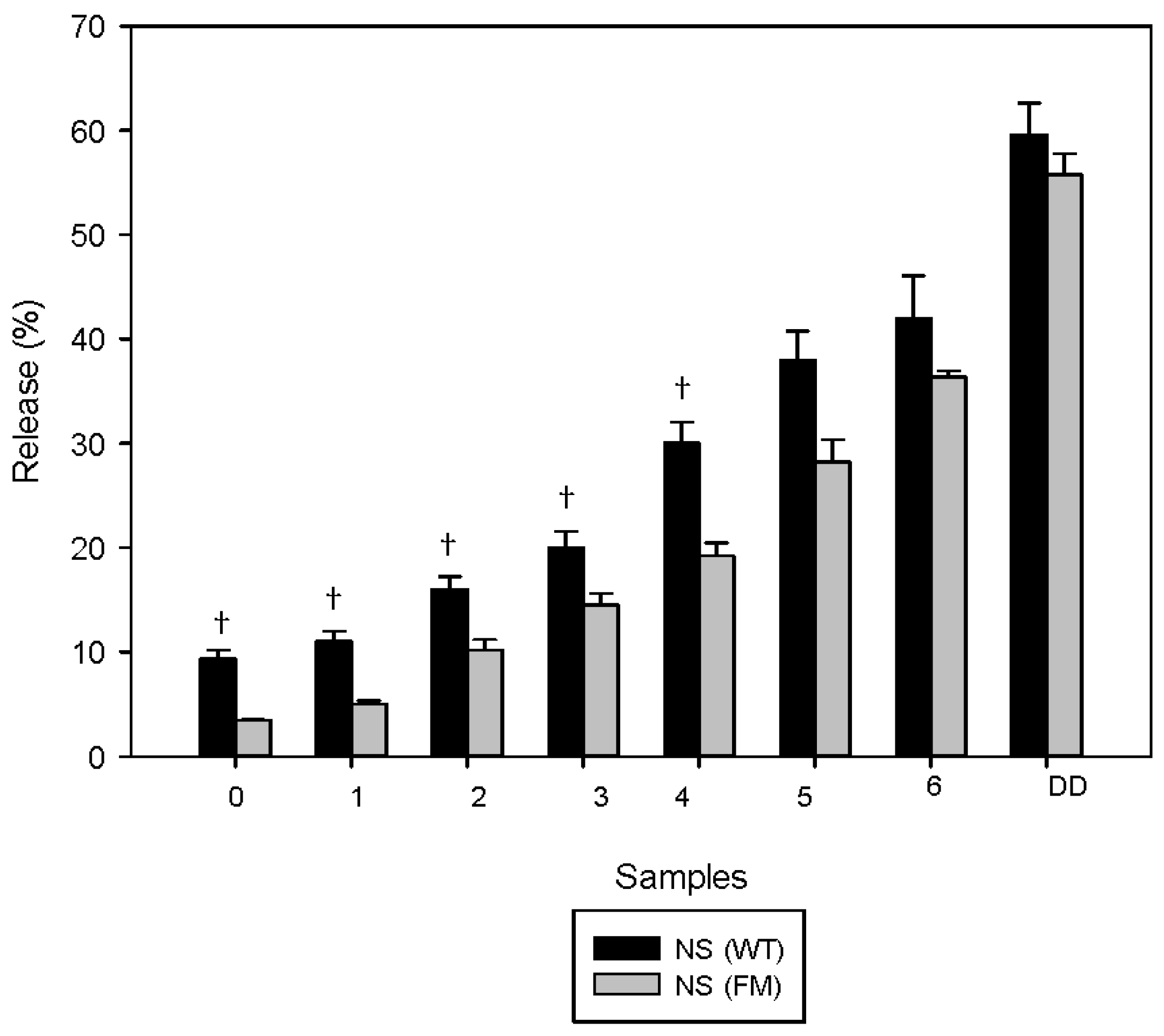