The Effect of Green Tea Ingestion and Interval Sprinting Exercise on the Body Composition of Overweight Males: A Randomized Trial

Aerobic exercise and dieting have been the major strategies used to combat the increasing worldwide prevalence of obesity [1]. Aerobic exercise programs have typically consisted of steady state, long duration, moderate intensity exercise (walking, jogging, swimming) for at least 40 min per session. Unfortunately, numerous studies have shown that aerobic exercise does not result in significant total body fat loss unless high volumes of exercise are performed [2]. Severe dieting has been found to result in some fat loss in the short term but of those who lose body fat over 90% will put the fat back on within five years [3]. Additionally, there are a number of unhealthy consequences that accompany severe dieting, such as a significant decrease in skeletal muscle mass [4]. This lack of success has generated interest into other fat loss strategies, such as green tea (GT) ingestion [5] and participation in interval sprinting exercise (ISE) [6].
In some studies regular GT ingestion has been shown to result in a significant decrease in body fat [7,8,9] whereas others have found no change [10,11,12]. It has been suggested that the fat loss effect of GT ingestion is brought about via a bioactive catechin called epigallocatechin gallate (EGCG) [13] which has been shown to increase fat oxidation and daily energy expenditure [14]. Habitual tea drinkers showed a 20% reduction in body fat compared to non-habitual tea drinkers [7]. Additionally, visceral [7] and abdominal fat [8] was decreased after 12 weeks of GT extract consumption.
ISE is an effective [15], enjoyable [16], and time efficient method of exercise training [6]. Tjønna et al. [15] showed that 16 weeks of ISE resulted in a significant reduction in fasting glucose, weight, and waist circumference, and a significant increase in insulin sensitivity, HDL, and maximal oxygen uptake (). Additionally, Trapp et al. [17] compared steady-state cycle exercise and ISE in women who performed a bout of ISE exercise lasting 8 s with a 12 s easy pedaling recovery (20 min total) for three times per week for 15 weeks. Fat mass decreased, whereas lean mass significantly increased in the ISE condition compared to no change in subcutaneous fat or lean mass after steady state exercise. An ISE protocol lasting 12 weeks with overweight males also resulted in significant decreases in total and visceral fat and significant increases in lean mass [18] and with overweight females a similar ISE program brought about significant reductions in abdominal fat and insulin resistance [19].
An important aspect of ISE may be its ability to increase fat oxidation after exercise [6]. For example, Gahreman et al. [20,21] examined the acute effect of GT extract and ISE on fat oxidation of females and males. Results indicated that participants who ingested GT before a bout of ISE significantly increased their post-exercise fat oxidation compared to an ISE alone condition. The long term effect of the combination of ISE and GT extract on body composition, aerobic fitness, and other health variables of overweight adults, however, does not appear to have been examined. Therefore, the aim of this study was to examine the effect of an ISE intervention and GT ingestion on the body composition of overweight males. It was hypothesized that the combination of 12 weeks of GT ingestion and ISE would result in greater body and abdominal fat reduction compared to 12 weeks of ISE or GT alone.

Forty eight healthy volunteer, non-smoking, males aged 26.1 + 0.7 years participated in the study. Regular GT consumers and individuals with known or suspected injury, cardiovascular, or musculoskeletal problems were eliminated. Participants read and signed an informed consent form which explained potential risks of DEXA, GT capsules, and blood sampling. The study was approved by the University of New South Wales Human Ethics Committee and has been registered as a clinical trial (Australian New Zealand Clinical Trials Registry, ACTRN126000096500). Project identification code was HREC10204 and date of approval was 23 November 2008. Body composition was assessed at St Vincent’s Hospital, whereas all other variables where collected and analyzed at the University of New South Wales.

Forty eight participants were randomly assigned into one of four groups: interval sprinting exercise (ISE), green tea (GT), green tea and interval sprinting exercise (GT + ISE), and control (C). Our prior research using a similar ISE program with males [18] examining aerobic fitness has produced a large effect size of 2.50 (Cohen’s d). A recommended power is 0.8. Thus, based on a moderately large effect size, sample sizes of 6–8 males per group would provide a statistical power of 0.8 at an alpha of p < 0.05. Enrolment and assignment was carried out by the first author and involved picking a paper marked “C, ISE, GT, or GT + ISE” from a hat. The majority of participants were university students. The study was initiated at the start of 2010 and was completed by the end of 2011. For various reasons five participants withdrew from the study: two left the university, two relocated from the area, and one dropped out of exercise training because he needed more time to prepare for impending examinations. These non-adherents were replaced with new participants who were allocated to groups by the same method. At pre-test there was no significant difference on any measured variable between the non-adherents and those males who stayed in the study. The GT and C groups were asked to consume three GT extract or placebo capsules daily, one with each meal, whereas the GT + ISE group participated in a supervised ISE training session, three times per week. The GT + ISE group were also asked to ingest one GT capsule one hour before fasted ISE training and one capsule with lunch and dinner. On non-exercise days they were asked to ingest one GT capsule with breakfast, lunch, and dinner. Participants completed a daily GT/placebo intake capsule form. The form recorded the ingestion of capsules before each exercise session and during each daily meal. Participants were regularly reminded to fill in the form which was completed for all days of the intervention by all participants. All participants reported full compliance. The GT capsule (GNC, Pasadena, California, USA) contained 250 mg of Camellia sinensis extract (187.5 mg polyphenols, 125 mg EGCG, 20 mg caffeine) [22]. tests for all participants were carried out before and at the end of the 12-week intervention using a TrueMax 2400 Metabolic Cart (ParvoMedics Inc., East Sandy, UT, USA) and a cycle ergometer (Ergomedic 839E, Monark, Vansbro, Sweden). The protocol started with a 3-min warm-up at 30 watts (W) and then increased by 1 W every two seconds. Participants were asked to maintain a pedal rate at 60 to 70 revolutions per minute (RPM) throughout the test. Power output continued to increase until participants failed to maintain pedal frequency despite verbal encouragement. Participants were asked to give a rating of perceived exertion (RPE) every minute throughout the test [23]. Heart rate was recorded using a Polar S810I telemetry system (Polar, Kempele, Finland).

Participants in the exercise groups completed 36 fully-supervised ISE sessions over 12 weeks. A typical exercise session consisted of a 5-min warm-up, 20 min of ISE, and a 5-min cool-down. The main exercise session consisted of 60 bouts of 8 s of high-intensity cycling followed by 12 s of slow cycling recovery. The ISE workload was set at 85% to 90% of each participant’s maximum heart rate at a cadence between 100 and 120 RPM and recovery was set at the same amount of resistance but at a cadence of 50 to 60 RPM. Participants were instructed to keep their intensity at a level to ensure the average heart rate for exercise fell within their individual maximal heart rate range and intensity was increased when heart rate during ISE fell below maximal heart rate range. ISE was coordinated with a pre-recorded compact disk counting down each sprint in a 3-2-1 manner. Training cycling data included continuous recording of heart rate and RPM, whereas RPE was assessed at 5-min intervals.

Blood samples were taken from an antecubital vein after overnight fasting prior to the start of the trial and at the end of the 12-week intervention. Whole blood in EDTA tubes was spun immediately in a chilled centrifuge (Model Megafuge 1.0R, Heraeus, Germany) at 4 °C at 3500 RPM for 10 min and plasma was stored immediately at −86 °C for later analysis. Blood lipid profiles including triglyceride (TG), low-density lipoprotein cholesterol (LDL-C), high-density lipoprotein cholesterol (HDL-C), and glucose were evaluated at baseline and at the end of the 12-week trial by automated enzymatic methods (Cholestech LDX, Hayward, CA, USA) from whole blood.

Participants were requested to adhere to their normal diet during the intervention. They were also asked to record their diet for three consecutive days before and after completing the intervention. Diet was analyzed using SERVE computer software (Professional edition, version 5.1, SERVE Nutrition Management Systems, Sydney, New South Wales, Australia). Forty eight hours before the final testing session, participants were asked to stop ingesting GT capsules.

Data were analyzed with the Statistical Package for Social Science for Windows software (SPSS Version 22, Armonk, New York, NY, USA). To examine changes after the intervention an analysis of covariance (ANCOVA) was used to evaluate differences between the groups for variables that did not violate ANCOVA assumptions. Where assumptions were violated one way ANOVA was conducted on the difference scores. Effect sizes were calculated using Cohen’s d with values of 0.0 to 0.2 considered a small, above 0.2 to 0.5 considered a medium, and above 0.5 considered a large effect. The statistical analysis was considered significant when the probability level was less than 0.05.

There was no significant difference between any group for body mass, BMI, and before the training program (Table 1).

There was no significant change in diet for any group before or after the 12-week intervention. Diet for all groups was similar and total energy, averaged across groups before and after the intervention, was 8290 + 386 kJ.day-1 that comprised of 45.5% carbohydrate, 18.9% protein, and 34.8% fat (Table 3).

The investigators would like to thank all the participants for their time and effort and Belinda White for help with data collection. 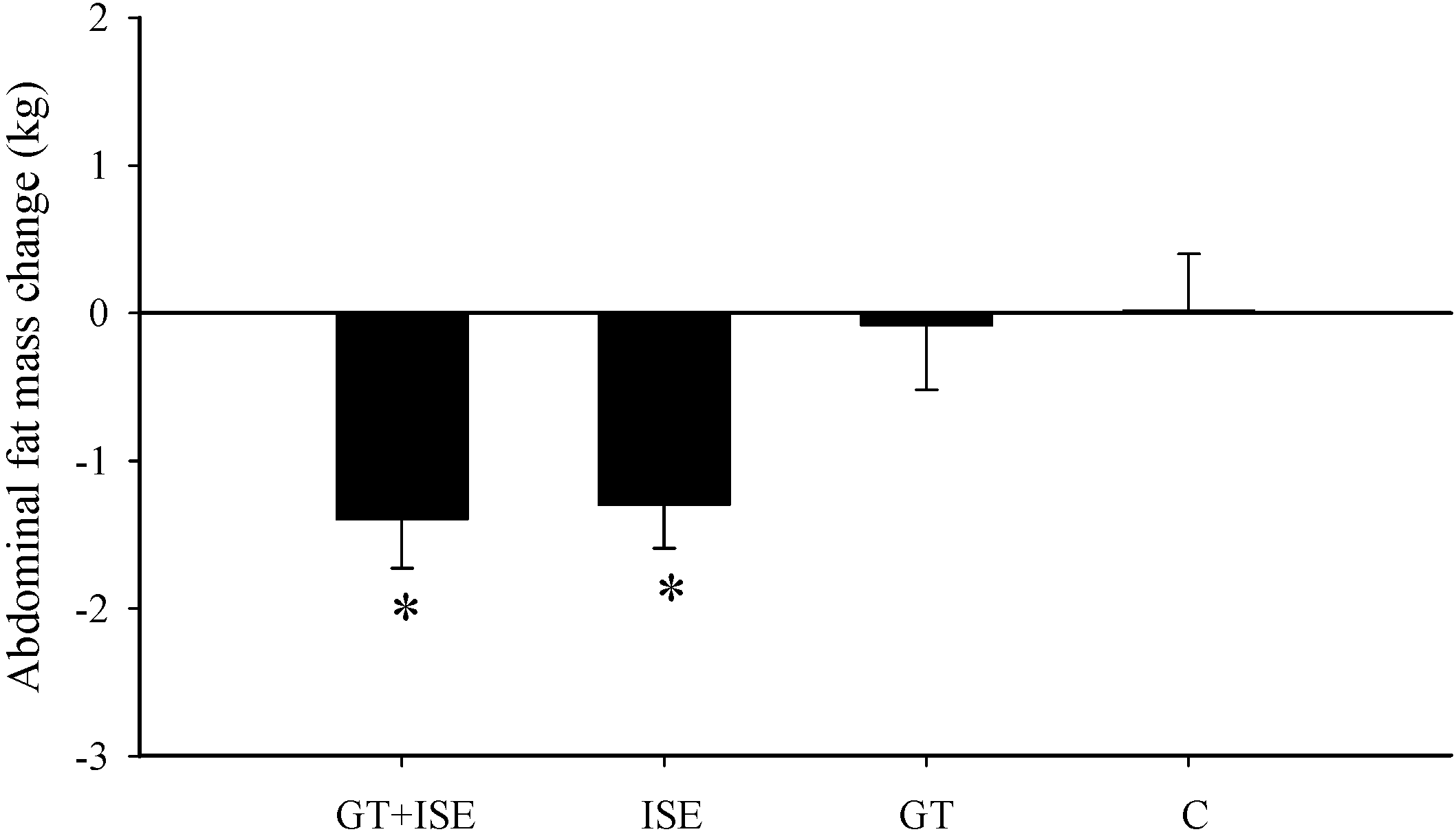