The rising prevalence of overweight and obesity has become a major global health challenge [1]. Obesity is a major risk factor for a series of metabolic disorders and chronic diseases, including insulin resistance, metabolic syndrome, type 2 diabetes, hypertension, cardiovascular diseases and certain cancer [2,3,4,5]. Accumulating evidence has proved that nutritional factors are strongly associated with the development, treatment and prevention of chronic diseases, such as obesity, hyperlipidemia, diabetes mellitus and cardiovascular diseases [6,7,8,9]. Therefore, it is urgent to improve etiologic research on diet by investigating nutrient and food intakes and reasonable dietary guidelines should be proposed by the government.
Histidine, a precursor for the synthesis of histamine, is abundant in red meat and fish and is an important amino acid for humans. It has been reported that lower plasma concentration of histidine is associated with protein-energy wasting, inflammation and oxidative stress in chronic kidney disease patients [10]. Previous animal studies confirmed that histidine supplementation could reduce body weight and ameliorates inflammation and oxidative stress of adipose tissue in a high-fat diet induced female obese rat model [11]. Moreover, dietary histidine also suppresses food intake and fat accumulation in rats [12]. In our previous study, we had found that serum histidine concentrations in obese women were significantly lower than those in non-obese women and had negative relationships with inflammation and oxidative stress [13]. The recovery of serum histidine concentrations through histidine supplementation could improve insulin resistance, reduce body mass index (BMI) and fat mass, and suppress inflammation and oxidative stress in obese women [14]. Only one cross-sectional study in Japanese adolescents showed a significantly negative correlation between energy intake and ratio of histidine to protein intake [15].
Although the central roles of dietary histidine for regulation of energy intake have already been established in animal and in vitro studies, to our knowledge, no study has analyzed the associations between dietary histidine and prevalence of obesity in general population. Moreover, whether chronic intake of dietary histidine is associated with insulin resistance, inflammation and oxidative stress in overweight/obese individuals is still unclear. The contribution of dietary histidine is not yet fully confirmed. Therefore, we assessed dietary histidine intakes of 2376 participants and examined relationships between dietary histidine and obesity in this population in this study. Furthermore, a subgroup study of 88 overweight/obese subjects (44 men and 44 women) was performed to explore the possible mechanism of the anti-obesity effect of histidine.

2.1. Development and Validation of the IDQC

To investigate dietary habits accurately, many methods for dietary assessment have been used by researchers. The food frequency questionnaire (FFQ) provides us a convenient and economic method to assess the general dietary intakes in a large population [16]. However, traditional face-to-face FFQs are impossible to conduct in a large population during a short period as the face-to-face FFQs always consume much time [17]. Previously, a convenient tool named Internet-based dietary questionnaire for the Chinese (IDQC) has been designed and validated at Harbin Medical University previously by experts of nutrition, epidemiology and bio-statistics [18].
Commonly eaten foods were divided into 16 categories (i.e., grains, potatoes, legumes, vegetables, fungus, fruits, seeds and nuts, livestock, poultry, dairy, eggs, fish, snacks, sugar, condiments, and beverages). Reference images of each food item’s weight/volume were created as references to assist the participants in making accurate estimation of food portions. Each participant had to choose the frequency and amount of each subtype of food groups. Finally, the questionnaire was uploaded to a secure website, which is free of access [19].
The IDQC has been validated as a convenient dietary assessment tool in our previous study [18]. Briefly, 644 recruited participants had completed the IDQC, the intakes of the food groups and nutrients in the IDQC were validated against those in the 3-day dietary records. The IDQC has been confirmed as an accurate tool for dietary assessment, because it has good consistency to results of 3-day dietary records. Therefore, the IDQC can be used for dietary assessment in large population.

We randomly invited 3626 participants from the Health Examination Center of the Second Affiliated Hospital of Harbin Medical University. Of the 3626 invited participants, 2995 agreed to participate in our study, register an account and finish the IDQC. Firstly, online demographic questionnaires were completed by all participants; the details of which were provided in our previous published manuscript [20]. The exclusive criteria were as follows: (1) incomplete information on the IDQC; (2) extreme daily energy intake (<800 kcal (3349 kJ) or >5000 kcal (20,934 kJ) for males; <600 kcal (2512 kJ) or >4000 kcal (16,747 kJ) for females); (3) low BMI (BMI < 18.5); and (4) diabetes diagnosis or being on a diet in the past 6 months. In total, 619 were excluded for the above reasons (Figure 1).
For power calculation, considering the 9.9 cm standard deviation of waist circumference (WC) in the overall population, a sample size of 594 in each quartile will be sufficient to detect a difference of 2.4 cm between quartiles. Moreover, this sample size is also sufficient to detect a difference of 1.0 kg/m2 in BMI, at 99% power and 5% level of significance.
To explore possible mechanisms of the anti-obesity effect of histidine, 88 overweight/obese subjects were randomly selected by stratified sampling for subgroup study. Except for dietary histidine (% protein), body weight, BMI, WC, and drinking and smoking habits, there is no difference between included participants and excluded participants. Characteristics are presented in Table S1. An oral glucose tolerance test (OGTT) was performed and metabolic profile, status of inflammation and oxidative stress were also examined. A flow chart of the study population is shown in Figure 1. This study was conducted according to the guidelines of the Declaration of Helsinki and all procedures involving humans were approved by the Human Research Ethics Committee of the Harbin Medical University (approval code [2015]006). Online informed consent was obtained from all participants.

After the online demographic questionnaire, all participants were asked to complete the IDQC for the past 4 months, and details of the IDQC are provided in our previous published manuscript [20]. The intake detail (frequency and amount) of each kind of food was obtained and average daily intakes of all nutrients were then calculated according to the China Food Composition Tables [21]. China Food Composition Tables is an important reference book for researchers of nutrition and public health of China. In this book, commonly eaten Chinese foods are evaluated and average nutrient contents (including energy, macro nutrients, trace elements, amino acids, and fatty acids) of these foods are measured by researchers and provided in the book. In our study, the histidine amount is total dietary source histidine (including protein, peptide and free form of histidine).

All participants were asked to stand on an anthropometer without heavy clothing and shoes. Body weight and height were measured to the nearest 0.1 kg and 0.1 cm. For WC measurement, the same standard was applied for each individual. WC was measured using a flexible anthropometric tape on the horizontal plane between the lowest rib and the iliac crest, to the nearest 0.1 cm. Blood pressure was measured using a standard mercury sphygmomanometer. Each participant was seated comfortably for 10 min in a quiet room. Korotkoff sounds I and V were criteria for systolic blood pressure (SBP) and diastolic blood pressure (DBP), respectively. SBP and DBP were measured twice and the mean values were calculated. All anthropometric measurements were performed by standardized and trained personnel and have good reproducibility.

2.5. Definition of Overweight/Obesity and Abdominal Obesity

BMI was defined as weight in kilograms divided by the square of height in meters (kg/m2). As this study was performed in Chinese population, the BMI cut-off points of Chinese subjects (overweight: 24.0–27.9; obesity ≥ 28.0) were used [22]. Abdominal obesity was defined as WC ≥ 85 cm in men and WC ≥ 80 cm in women, according to the 2006 Guidelines on Preservation and Control Overweight and Obesity in Chinese Adults classification [23].

2.6. Collection and Laboratory Analysis of Serum

3.2. Dietary Histidine of Overweight and Obesity Participants Was Lower than Healthy Controls

We firstly performed this comparison to find the differences in dietary histidine among three BMI categories (normal weight < 24.0, overweight 24.0–28.0, and obesity ≥ 28.0). In the overall male and female populations, dietary histidine of overweight and obese groups were all significantly lower than normal group (p < 0.05 between normal and overweight group, p < 0.01 between normal and obese group). Moreover, dietary histidine of obese group was significantly lower than overweight group (p < 0.05). Confounding factors such as age, education, income, labor, exercise status, dietary carbohydrate, fat, protein, fiber and cholesterol intake and smoking habits were controlled in this study (Figure 2).

3.5. Correlations between Dietary Histidine and Status of Insulin Resistance, Inflammation and Oxidative Stress in Overweight/Obese Participants

In summary, our study adds evidence supporting the inverse associations between dietary histidine and obesity, possibly through reduction of energy intake and improvements of insulin resistance, inflammation and oxidative stress. To confirm the casual associations, long-term cohort studies of this issue are needed.

The following are available online at https://www.mdpi.com/2072-6643/8/7/420/s1, Table S1: Characteristics of overall and subgroup participants. 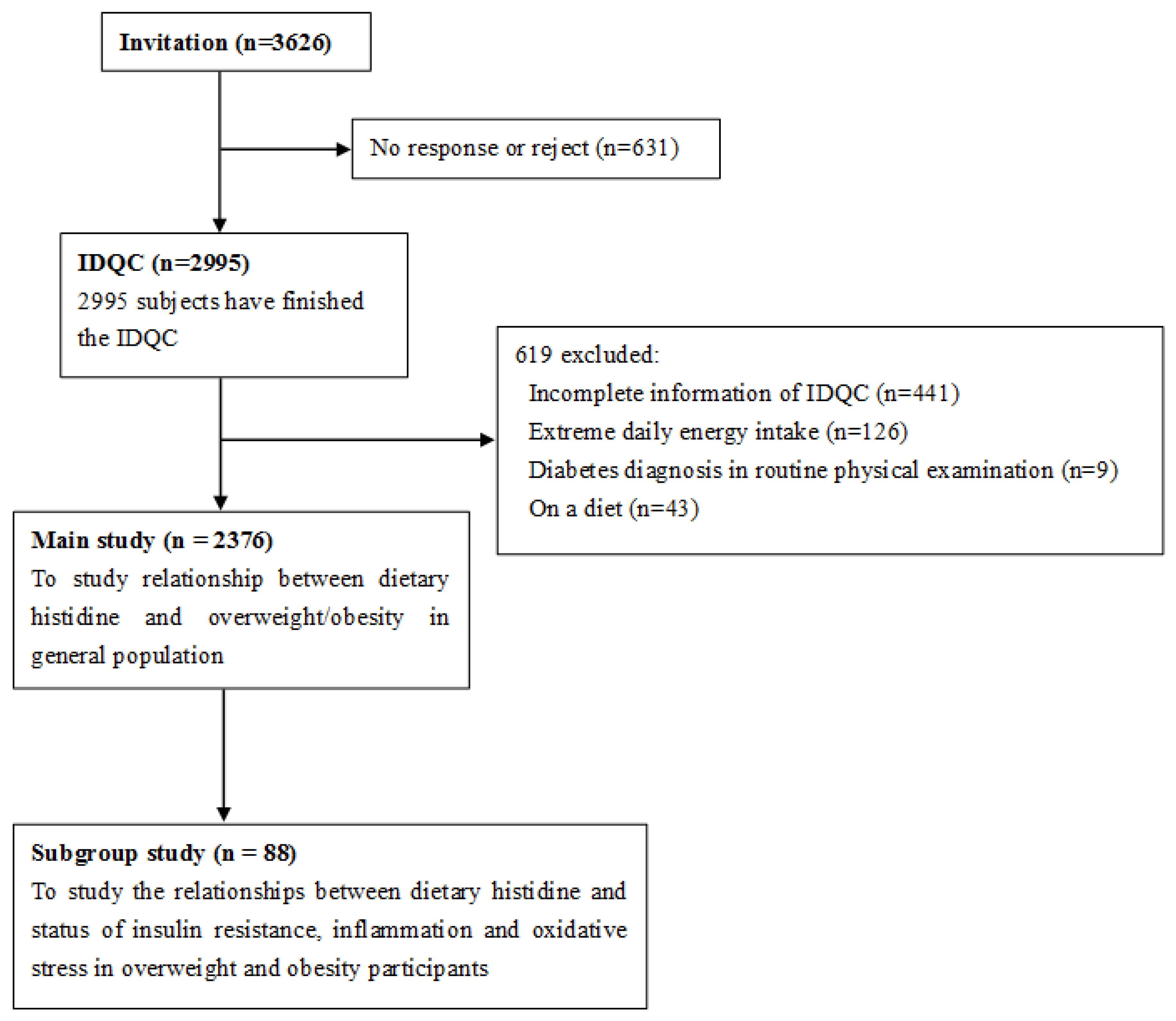