Metabolic disorders occurring in menopausal women, including dyslipidemia, hypertension, type 2 diabetes, endothelial dysfunction, and vascular inflammation, constitute risk factors for cardiovascular disease [1,2]. The lipid and lipoprotein metabolism is markedly altered in postmenopausal women when elevated total cholesterol, low-density lipoprotein (LDL) cholesterol, and very low-density lipoprotein (VLDL) cholesterol have been observed [3]. Clinical epidemiological studies have shown that postmenopausal women and ovariectomized patients have an increased risk of cardiovascular diseases, partially because of estrogen deficiency–induced oxidative stress. Furthermore, oxidative stress may aggravate or accelerate established cardiovascular diseases [4].
Oxidative stress is a biochemical disequilibrium propitiated by the excessive production of free radicals and reactive oxygen species (ROS). Antioxidant enzymes, such as catalase (CAT), superoxide dismutase (SOD), and glutathione peroxidase (GPx), play an important role in protection of the body from oxidative damage by ROS [5]. Nuclear factor erythroid 2–related factor (Nrf2) protects cells against oxidative stress through the antioxidant response element (ARE)-mediated induction of several phase 2 detoxifying and antioxidant enzymes, such as heme oxygenase-1 (HO-1), SOD, GPx, CAT, and glutathione S-transferase (GST) [6,7]. Among all these cytoprotective enzymes, HO-1 plays a crucial role in protecting cells against oxidative stress [8]. Moreover, recent data indicates that estrogen deficiency in the menopausal state leads to an increase in oxidative stress and ovariectomy induces diminished HO activity and expression [9]. Procyanidins, quercetin, resveratrol, and curcumin [10], as well as other flavonoids or polyphenols, have been reported to up-regulate HO-1 expression by activating Nrf2 to bind with ARE in the HO-1 gene promoter region [11,12].
Hawthorn (Crataegi fructus), also known as haw, maybush, or whitehorn, is part of a genus of spiny shrubs and trees and has been widely used for foodstuffs and traditional medicine in Europe, Asia, and North America [13]. There are many different species of hawthorn, which is cultivated in various countries [14]. Particularly, Crataegus pinnatifida Bunge is widely distributed in Asia (Korean, China and Japan) [15,16]. The main biologically active components reported in hawthorn are B-type procyanidins, epicatechin, chlorogenic acid, hyperoside, procyanidin C1, and rutin [17]. According to the results of previous studies, procyanidin content is higher in hawthorn than in other fruit sources, such as grape, apple, red raspberry, and strawberry [18]. The antioxidant activity of hawthorn has been reported to scavenge free radicals [19], and prevent lipid peroxidation [20]. It has also been reported that hawthorn is effective for atherosclerosis [21], cardiovascular protection [22], endothelium-dependent vasorelaxation [23], and coronary circulation [24].
The aim of this study was to investigate the effect of hawthorn fruit extract on the lipid profiles and antioxidant properties in ovariectomized (OVX) rats. We hypothesized that hawthorn extract administration would regulate the hepatic expression of genes related to the Nrf2/HO-1–mediated pathway.

Dried hawthorn powder (whole fruits) was purchased from herbal medicine store (Seoul, Korea). The hawthorn (Crataegus pinnatifida Bunge) used to make dried powder were planted at Jeonnam, Korea. A total of 50 g of hawthorn powder was refluxed with 500 mL of 70% ethanol at 63 °C for four hours. The mixture was centrifuged at 3000 rpm for 30 min and filtered using filter paper (3MM CHR, Whatman, Maidstone, UK), and then the filtrates were concentrated using a rotary evaporator (N-21NS; EYELA, Tokyo, Japan) at 40 °C. The resulting filtrates were dried using a freeze drier (Operon FDUT-8606, Gimpo, Gyeonggi, Korea) and then stored at −18 °C until further analysis. The yield of the hawthorn extraction was 25.07%.

Nine-week-old female Sprague-Dawley rats (KOATECH, Gyeonggi-do, Korea) were housed in controlled temperature (21 ± 1 °C) and humidity (50%–60%) conditions in a 12-h light/12-h dark cycle with free access to water and an AIN-76A diet (Research diet, New Brunswick, NJ, USA). After acclimation for two weeks, the animals were either OVX or sham-operated. The surgical procedure was performed under general anesthesia and administered as an intraperitoneal injection of 0.2–0.23 mL with a combination of Zoletil and Rompun in a 1:1 ratio. A bilateral (left and right) incision (1–2 cm) that included the skin, muscle, and peritoneum was performed 2 cm below the last rib, and the left and right ovaries were extirpated. For the sham operation, only a small amount of fat around each ovary was extirpated. After two weeks of recovery, the rats were randomly divided into four groups (n = 7 for each group): the non-OVX control (Sham), the OVX-control (OVX), the OVX + 100 mg/kg b.w. of hawthorn extract (OL), and the OVX + 200 mg/kg b.w. of hawthorn extract (OH). All the animal procedures were performed in accordance with the guidelines issued by the Animal Ethical Committee of Sookmyung Women’s University for the care and use of laboratory animals (SMWU-IACUC-1502-023). The rats in the treatment group were orally administered hawthorn extract, which was dissolved in distilled water every day for eight weeks. The control groups were administered 1 mL of distilled water. Food intakes were measured every other day, and body weights were monitored once a week. The food efficiency ratio (FER) was calculated by following formula (1).
Food efficiency ratio (FER%) = Body weight gain (g)/food intake (g/day)

After an overnight fast, the final body weights were measured and the rats were euthanized using CO2. The blood was collected by cardiocentesis to determine the serum lipid profiles. The serum was separated by centrifugation at 3000 rpm for 30 min (Combi-514R, Hanil Co. Ltd., Seoul, Korea). The serum and livers were stored at −70 °C until analysis (DF8517; Ilshin Laboratory Co., Ltd., Seoul, Korea).

The extraction was a modification of the Folch method [28]. Approximately 0.1 g of frozen liver was minced and transferred into a test tube. A total of 3 mL of chloroform/methanol (2:1, v/v) was then added and followed by a 2 min homogenization. The suspension was vortexed at room temperature for 20 min. After vortexing, 2 mL of double-distilled water was added. The samples were then centrifuged at 3000 rpm for 20 min. After centrifugation, the bottom layer was carefully aspirated into a new test tube and wash dried by stream of nitrogen. The dried lipid was weighed and re-dissolved in methanol and used for lipid analysis. The liver TG content was determined using the TG-S kit (3I1570; Asanpharm, Hwaseong, Korea).
The determination of malondialdehyde (MDA) by thiobarbituric acid (TBA) was used as an index of the extent of lipid peroxidation [29]. Briefly, 0.3 g of liver tissue was homogenated with 3 mL of cold 10% trichloroacetic acid (TCA). The homogenate was centrifuged at 3000 rpm for 30 min at RT. The supernatant was mixed with 2 mL of 0.6% TBA and placed in a hot water bath for 15 min and then cooled. The absorbance of clear supernatant was measured at 450, 532, and 600 nm. The results were expressed as MDA formation per milligram of protein. The MDA content was calculated using the following formula:
MDA content (μmol·L−1) = 6.45 × (A532 − A600) − 0.56 × A450

RNA was isolated from homogenized liver using an easy-spin™ total RNA extraction kit (17221, iNtRON Biotechnology, Gyeonggi-do, Korea). The reverse transcription–polymerase chain reaction (RT-PCR) was performed in a PCR machine (Bio-Rad Laboratories, Hercules, CA, USA) using a Maxim RT-PCR Premix kit (25131, iNtRON Biotechnology, Gyeonggi-do, Korea). Details of the primers and optimal cycling conditions are shown in Table 1. The PCR products were visualized after electrophoresis in 2% agarose gel. All gene expressions were normalized to Glyceraldehyde-3-phosphate dehydrogenase (GAPDH), which served as an internal control for the quality of isolated RNA from each homogenized liver sample.

Figure 4 shows the effect of hawthorn extract on the antioxidant activity in serum. Serum GPx activity showed a 42% increase in the OH group compared with the OVX group. No significant changes in CAT activity were observed among all groups.

The hepatic TG levels of the OL and OH group were 28% and 47% lower than that of the OVX group, respectively, while there were no differences in the hepatic triglyceride level between the OVX and Sham groups. The MDA level in the OVX group increased by 75% compared with that of the Sham group, while the OL and OH groups showed a 40% and 55% reduction in MDA level, respectively (Figure 5).

In conclusion, the findings of this study add to the current knowledge about the effects of hawthorn extract on ovariectomy-induced dyslipidemia and oxidative stress, particularly regarding serum GPx activity, the hepatic MDA level, hepatic mRNA expression of Nrf2, HO-1, and GPx and protein expression of Nrf2, HO-1, and GPx. These results provide clinically relevant insight into the supplementation of hawthorn extract to prevent oxidative stress–related cardiovascular disease caused by estrogen deficiency.

This Research was supported by the Sookmyung Women’s University Research Grants (1-1503-0054). 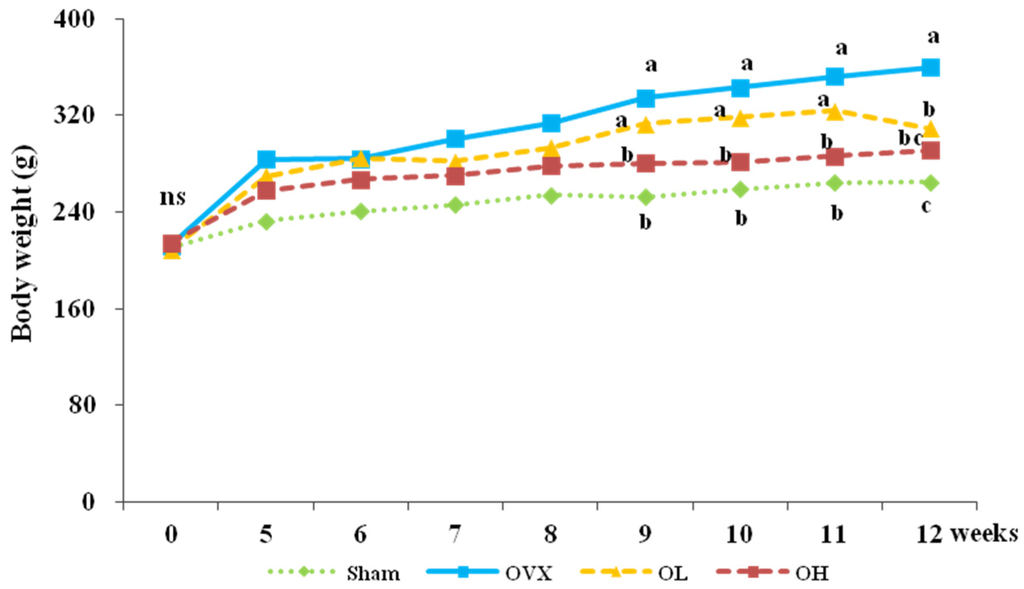 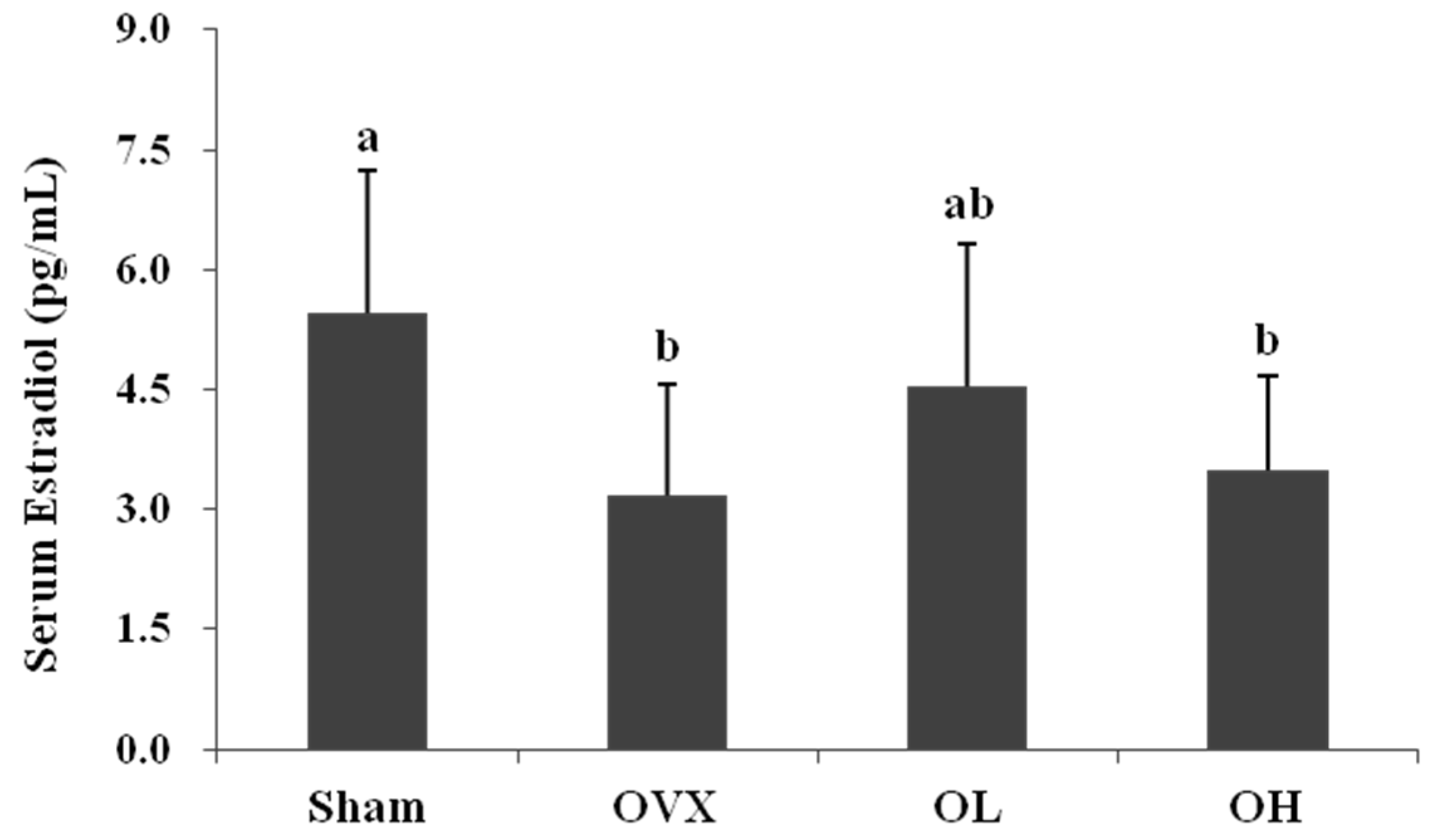 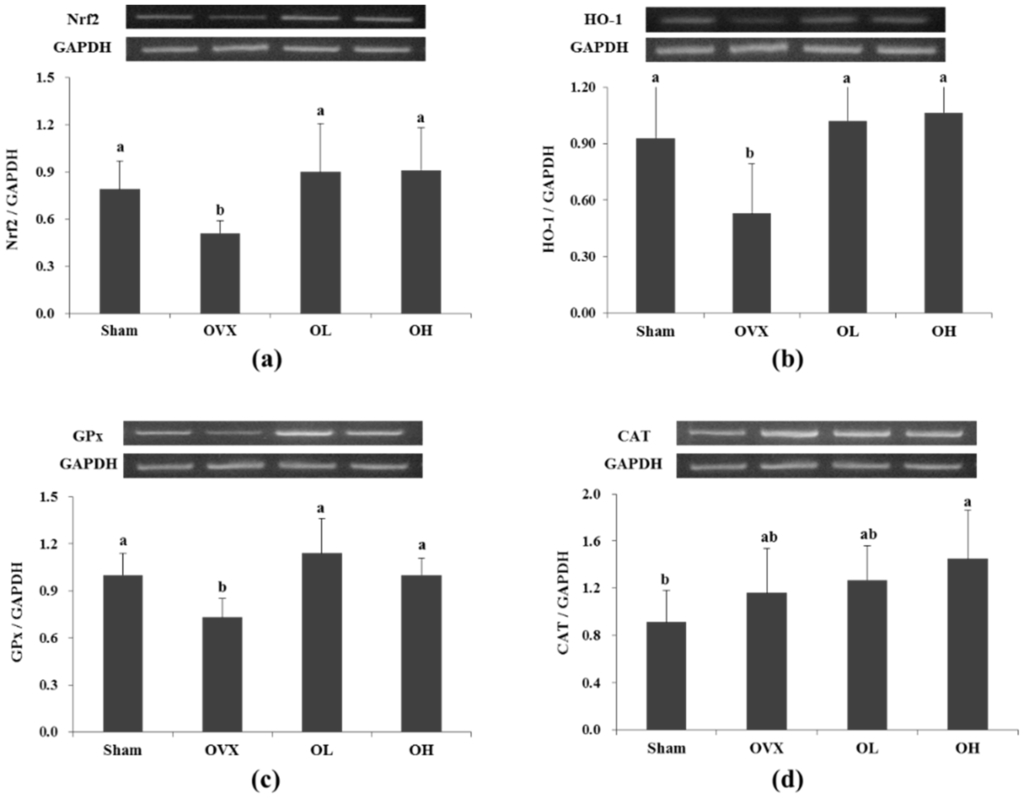 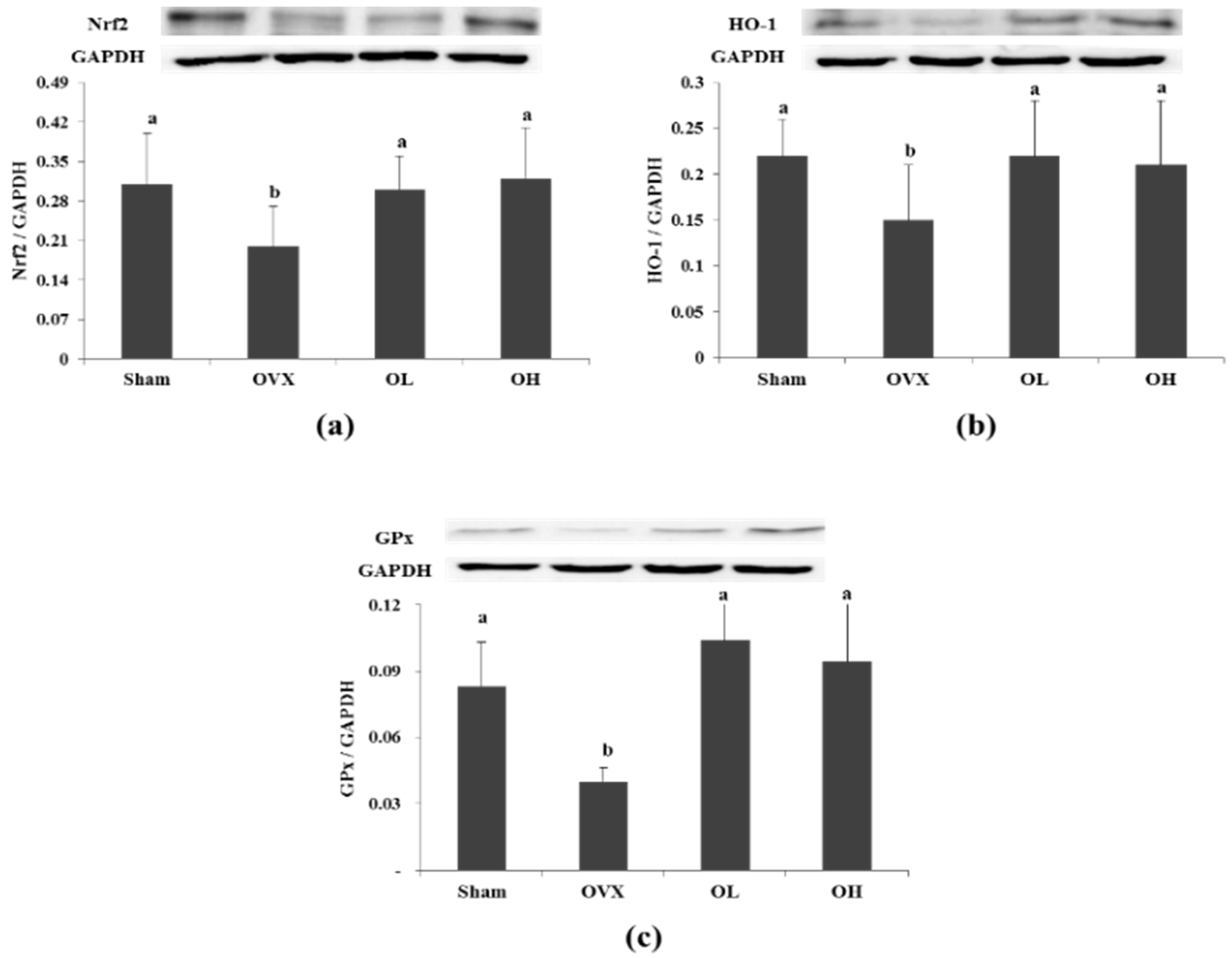