In recent years, obesity and related metabolic disorders have emerged as major health concerns [1,2]. Obesity is associated with increased risks for developing type 2 diabetes mellitus (T2DM), hyperlipidemia, hypertension, coronary heart disease (CHD), stroke, and cancer. Development of these diseases can also lead to psychological and psychiatric illnesses, adding to the societal burden associated with these diseases [3,4,5].
Obesity and related metabolic disorders are attributable to a combination of genetics, unhealthy diet and lifestyle. Recent studies have demonstrated that disturbance of gut microbiota, especially the ratio of Bacteriodetes to Firmicutes phylum, is closely related to obesity and metabolic disorders [6,7,8,9,10,11]. In addition, obese subjects exhibit systemic chronic inflammation and a high level of serum endotoxins (lipopolysaccharides (LPS), a key component of the cell wall of gram-negative bacteria), termed “metabolic endotoxemia”, which associates with gut barrier dysfunction [12,13,14,15,16].
Gut microbiota in the lumen is normally isolated by the intestinal epithelium from lamina propria and deeper layers [17,18], and LPS derived from gut microbiota is confined to the gut lumen and does not penetrate healthy intestinal epithelium [19]. However, a damaged intestinal epithelium or other gut barrier dysfunction can lead to disturbance of gut microbiota [16], allow for LPS permeation and cause metabolic endotoxemia [20,21,22]. Recognition of LPS by Toll-like receptor 4 (TLR4) of host cells triggers downstream inflammatory events [23,24] that contributes to the development of obesity and metabolic disorders such as insulin resistance [10,25].
Tight junctions are key components for maintaining gut barrier integrity [17,26]. Another important protein for gut barrier function is intestinal alkaline phosphatase (IAP) that is a type of glycoprotein anchored in the apical membrane of enterocytes. IAP has multiple roles in maintenance of gut barrier, including detoxification of LPS via its dephosphorylation, remission of systemic inflammation, protection of gut barrier function and modulation of gut microbiota [27,28].
Although various approaches are recommended for obesity management [29], such as dieting, behavior therapy, exercise, pharmacotherapy, and bariatric surgery, they are often defective [29,30]. Here, we consider that modification of gut microbiota, protection of gut barrier, remission of metabolic endotoxemia, and relief of systemic inflammation may provide a novel strategy for the treatment of obesity and related metabolic disorders.
Dietary fiber consists of non-digestible carbohydrates that derived from plants. Recent animal experiments and clinical trials have shown that dietary fiber, such as whole-grain cereal, grape skin extract, yellow pea fiber and wheat-derived arabinoxylan oligosaccharides, has hypolipidemic and hypoglycemic effects and may contribute to weight loss [31,32,33,34,35]. Apple-derived pectin is the main soluble fiber in apples and can be fermented by gut microbiota in the colon to produce metabolites with local intestinal and systemic effects. Apple-derived pectin may also help to maintain the balance of gut microbiota [36].
The aim of the present study was to assess potential effects of apple-derived pectin on diet-induced obesity in rats. We found that apple-derived pectin could modulate gut microbiota, preserve gut barrier function, and alleviate metabolic endotoxemia and inflammation in diet-induced obese rats. Our findings suggest that apple-derived pectin may be useful for the clinical management of obesity.

Male Sprague-Dawley rats were obtained from the Medical Experiment Animal Center of the Jinling Hospital, Nanjing, China, at 4 weeks of age with an initial weight of 90 ± 10 g. Rats were housed in individual cages in an optimum environment at 23 ± 2 °C and a relative air humidity of 55% ± 10% with a 12 h light/dark cycle. Animals had free access to a standard chow diet (10% kcal% fat; D12450J, Research Diets, New Brunswick, NJ, USA) or a high fat diet (60% kcal% fat; D12492, Research Diets) and water throughout the experiment. This study was approved by the Animal Care and Use Committee of Nanjing University and Jinling Hospital and complied with the principles of laboratory animal care (NIH publication No. 86–23, revised 1985).

All animals were anesthetized by intraperitoneal administration of ketamine (0.3 mL/100 g body weight). Blood (about 3 mL) was immediately collected in a dry tube without heat source. Blood samples were allowed to clot for 2 h at room temperature and were then centrifuged for 15 min at 3000 rpm at 4 °C. Serum was removed, and the samples were stored at −80 °C until further analysis.
After blood collection, a part of the liver, distal ileum, mesentery adipose, and the whole part of epididymal fat pad were collected, weighed, wrapped, and immediately put into liquid nitrogen. This process took no longer than 3 min after sacrifice of the animal. All samples were stored frozen at −80 °C until further analysis.

Serum LPS concentration was determined by Chromogenic End-point Tachypleus Amebocyte Lysate (CE TAL) assay (Chinese Horseshoe Crab Reagent Manufactory, Co., Ltd., Xiamen, China). In this assay, color intensity is directly proportional to endotoxin levels. Serum was diluted 1/10 with pyrogen-free pipes to avoid interference in the reaction. Endotoxin in the serum activates a cascade of enzymes in the assay, and the activated enzyme splits the synthetic substrate, producing a yellow product with maximum absorbance at 405 nm. The yellow product can further react with diazo reagents to form a purple product with maximum absorbance at 545 nm. Every sample was treated in duplicate for determination. The limit of detection ranged from 0.1 to 1.0 EU/mL. An internal control for LPS recovery was included in the calculation. Every reaction in the kit was done in duplicate.

mRNA levels of TNF α, IL-6, IL-10, and TLR4 were measured by quantitative real-time polymerase chain reaction (qPCR). The primers are listed in Table 1.
mRNA extraction and RT-PCR were performed according to the manufacturer’s instructions as described in the PrimeScript RT reagent Kit (TaKaRa Bio, Tokyo, Japan). Q RT-PCR was performed by SYBR Select Master Mix System (Applied Biosystems, Foster City, CA, USA). The levels of mRNA expression were measured by StepOne Realtime PCR system with a ∆Ct relative quantification model. The mRNA expression of βactin and 36B4, two reference genes, were calculated and used for normalization. In our study, mRNA expression of the tested genes displayed similar results with either reference gene, thus we used βactin as the reference gene for normalization in this manuscript.

IHC staining was used to detect the location of IAP. After antigen retrieval with buffered citrate and blocking with 5% bovine serum albumin (BSA), ileum tissues were incubated with primary antibodies against IAP (Abcam, Cambridge, UK, 1:200) overnight at 4 °C. The sections were then processed using the DAB Kit (ZSGB-Bio, Beijing, China) according to the manufacturer’s instructions. Hematoxylin staining was performed at the end to counterstain nuclei. The cover slips were fixed with 50% glycerin.

2.11.1. Collection and Transportation of Samples

Cecum content was collected from every rat, stored in liquid nitrogen, transported to BGI laboratory (Shenzhen, China), packed with dry ice, and then immediately stored in a −80 °C refrigerator before extraction of total DNA.

In conclusion, this study demonstrated that apple-derived pectin could modulate gut microbiota, as previously shown for inulin-type fructan and wheat-derived arabinoxylan oligosaccharides [35,64]. Concomitantly, pectin supplementation alleviated HFD-induced body weight gain, fat mass development, dyslipidemia, hyperglycemia, hyperinsulinism, metabolic endotoxemia, and systemic inflammation in obese rats. In addition, expression of IAP and gut barrier function (tight junctions) were improved with pectin supplementation. These results indicate that apple-derived pectin might play a protective role with prebiotic properties in the prevention of obesity and associated metabolic and inflammatory disorders. Prospectively, it might become a useful tool for clinical management of patients with metabolic disorders.

We thank BGI laboratory for expert guidance in 16S rRNA Pyrosequencing and data analysis. We thank Jingcheng Bi, Qiaoli Chen, Liang Chen, Min Li, Chao Quan and Yang Sheng for their expert help with animal and biology experimentations. Thanks to the National Natural Science Foundation in China (81470797) and the Ministry of Science and Technology of China (Grant No. 2014BAI02B01 (the National Key Scientific Research Program of China)) for financial support. 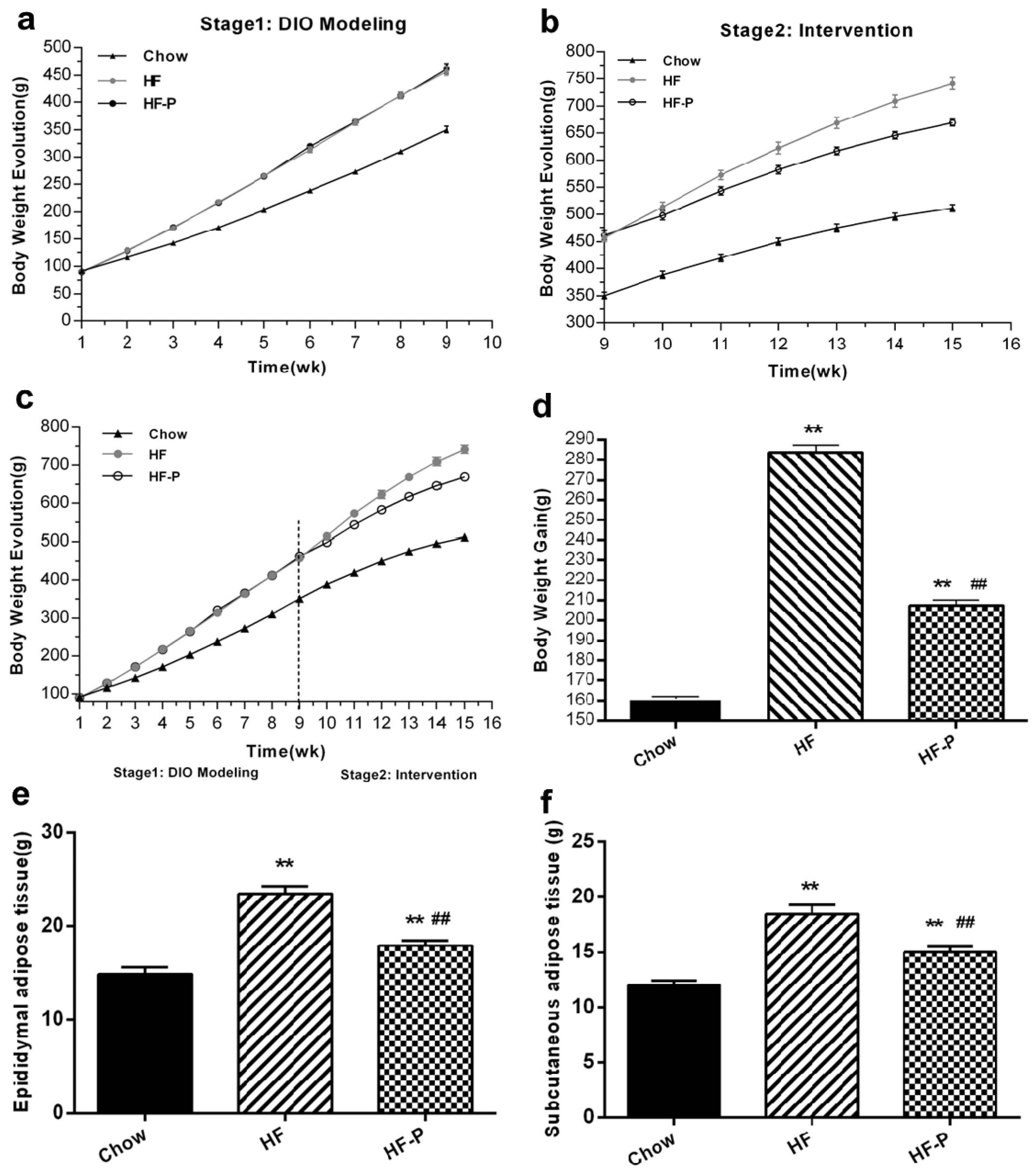 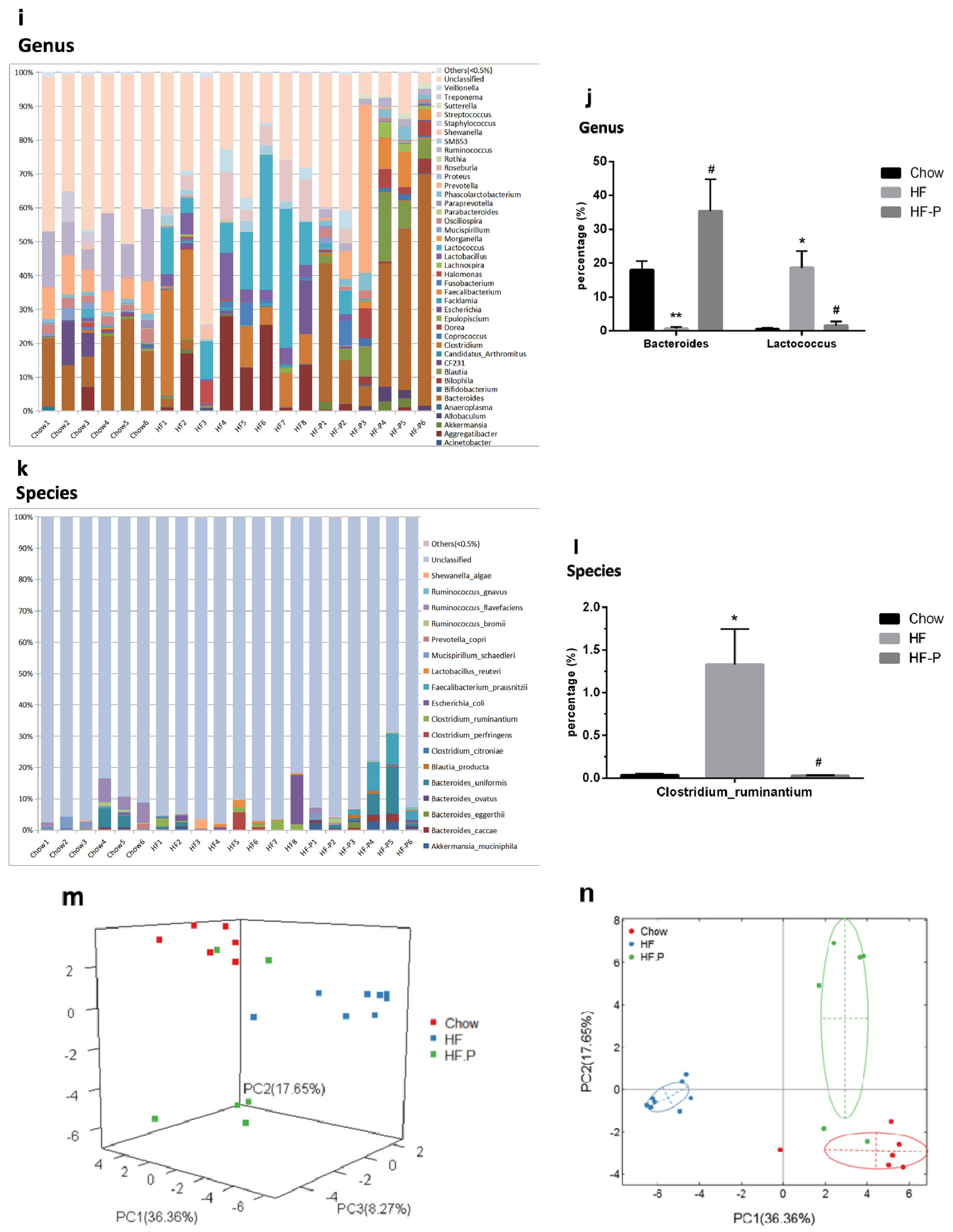 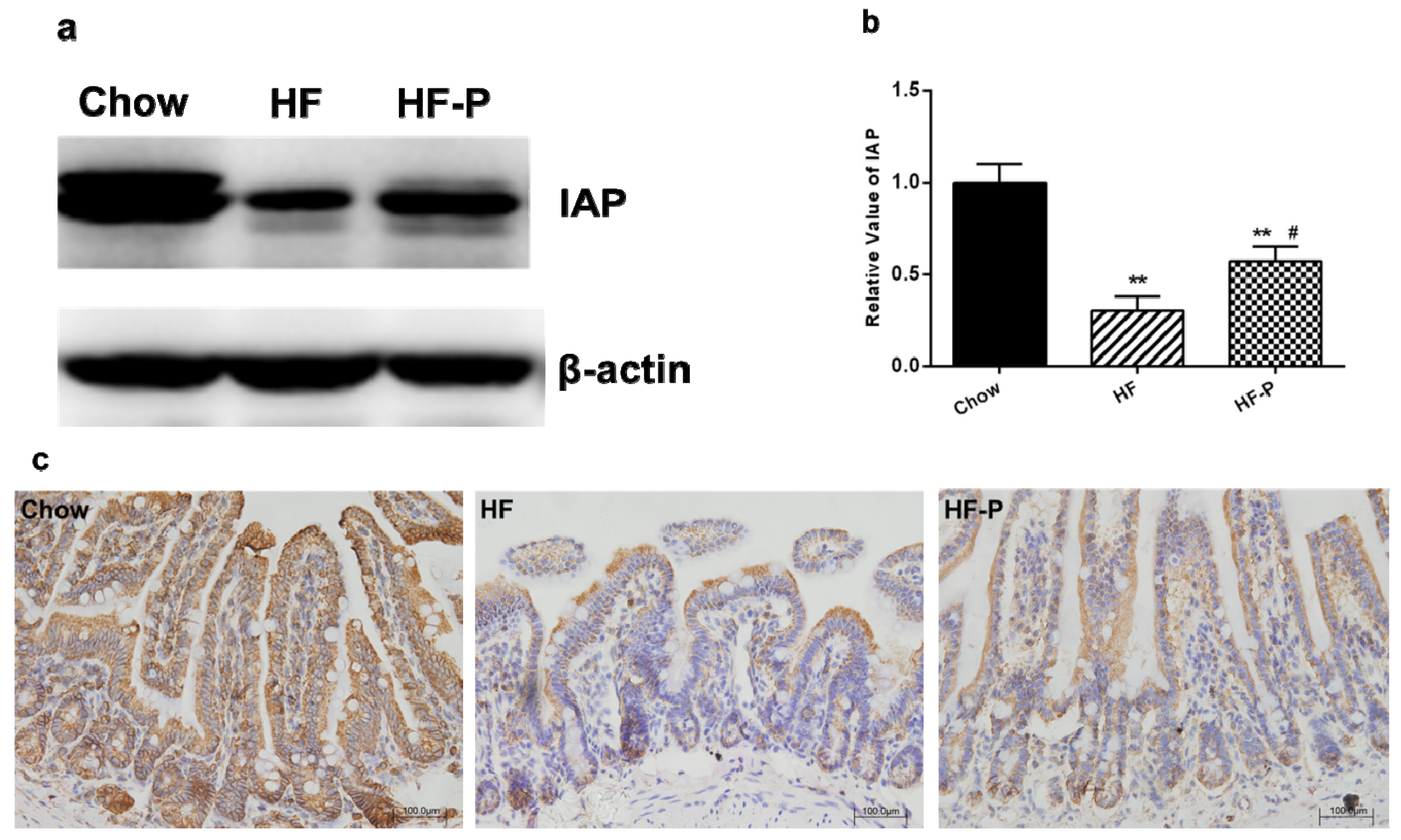 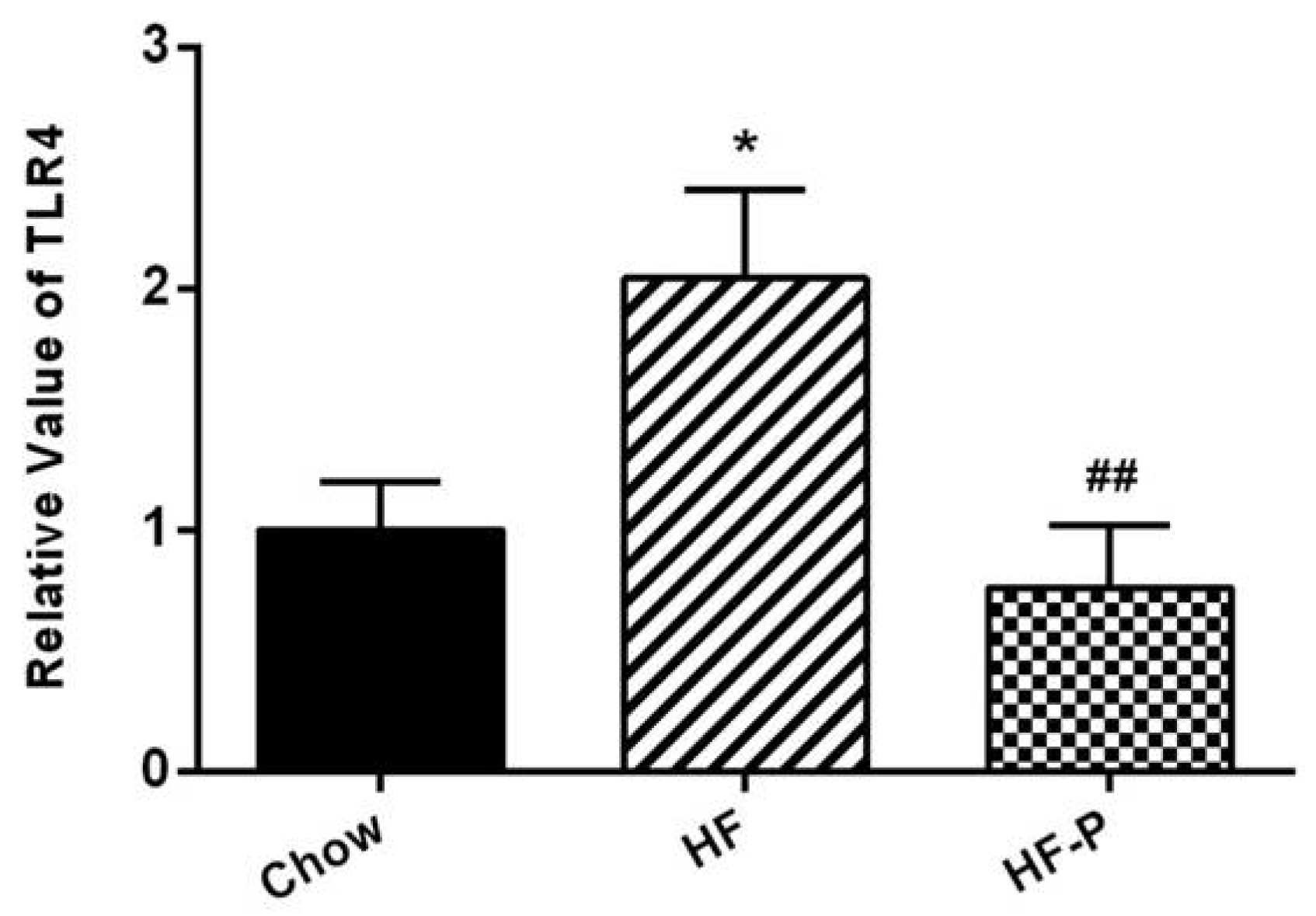 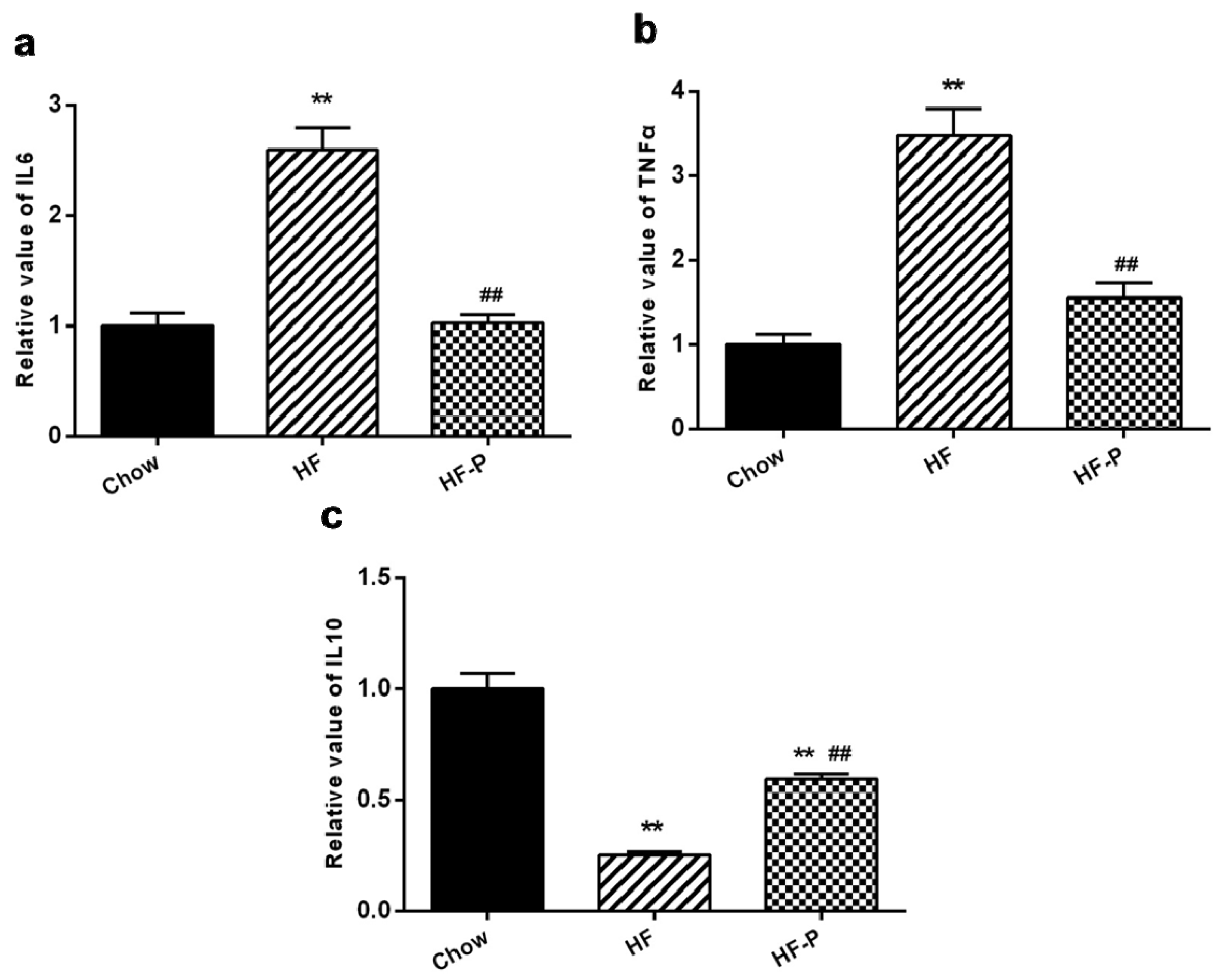