Co-Ingestion of Whey Protein with a Carbohydrate-Rich Breakfast Does Not Affect Glycemia, Insulinemia or Subjective Appetite Following a Subsequent Meal in Healthy Males
Next Article in Special Issue

Osteoporosis is characterized by low bone mass with consequent increases in susceptibility to fracture, and it is considered to be a major public health problem affecting particularly postmenopausal women and elderly people in general [1]. Several nutritional and dietary factors have been identified as being important for maintaining bone health, preventing loss of bone mineral density (BMD), and reducing the risk of osteoporosis in old age [2]. Particularly, the roles of calcium and vitamin D are well established in bone health [2,3]. Previously, we reported that the blood level of n-3 polyunsaturated fatty acids was associated with bone health in Korean menopausal women [4].
Intake of fish rich in n-3 PUFAs, such as eicosapentaenoic acid (EPA; 20:5n3) and docosahexaenoic acid (DHA; 22:6n3), can favorably modulate bone health [5]. N-3 PUFAs have been suggested to suppress the production of inflammatory cytokines [6], enhance calcium absorption [7], and reduce urinary calcium excretion [8]. Epidemiologic studies have reported that intake of fish and n-3 PUFAs was significantly associated with BMD [9], fracture [10], and the risk of osteoporosis [11] in postmenopausal women or elderly men in an Asian population. However, in Western populations, the consumption of n-3 PUFAs or fish was not found to be associated with BMD [12] or fracture [13,14,15,16,17] in elderly men or women, except for one study showing that the consumption of n-3 PUFAs and dark fish was positively associated with BMD in elderly men [18].
Previous studies have focused on the association of fish intake and bone health, but shellfish also contain n-3 PUFAs [19]. Shellfish intake had a significant protective effect on the risk of hip fracture in elderly Chinese [10], and the consumption of fish and shellfish was positively associated with BMD in Chinese women [20]. American adults have been reported to consume shellfish and fish at a 4:6 ratio [21], and Korean adults consume shellfish and fish at a 3:7 ratio [22]. Consumption of fish and shellfish, rather than the consumption of fish alone, could be more closely related to bone health, but there has been no study comparing the association between fish and shellfish consumption and the risk of osteoporosis. Therefore, the purpose of the present study was to investigate the hypothesis that the consumption of fish and shellfish is positively associated with bone mass and negatively associated with the risk of osteoporosis in Korean and American men and postmenopausal women ≥50 years old.

This study was based on data from the Korean National Health and Nutrition Examination Survey (KNHANES) 2008–2011 and the National Health and Nutrition Examination Survey (NHANES) 2007–2010. The surveys were completed on a stratified, multistage, clustered national probability sample of non-institutionalized civilians. Data were included from men and postmenopausal women ≥50 years old who had undergone a checkup for osteoporosis. Participants were excluded if they used hormone replacement therapy or were missing data on dietary intake or BMD. Participants were also excluded if their daily energy intake was lower than the 1st percentile or higher than the 99th percentile. Thus, 7154 participants from the KNHANES and 2658 participants from the NHANES were included after excluding 30,599 from the KNHANES and 17,357 from the NHANES. The study protocol was approved by the Institutional Review Boards of Hanyang University (HYI-15-069).

BMDs of total femur, femoral neck, and lumbar spine were measured using dual-energy X-ray absorptiometry (DXA; Discovery-W, Hologic, Inc., Waltham, MA, USA for the KNHANES and QDR 4500A, Hologic, Bedford, MA, USA for NHAENS). The prevalence of osteoporosis was defined by diagnosis by a physician in the KNHANES and the NHANES.

The risk factors of osteoporosis included in the analysis were body mass index (BMI), smoking, alcohol, exercise, family history, and medical history, which are factors suggested by the International Osteoporosis Foundation (IOF), the National Osteoporosis Foundation (NOF), and the Fracture Risk Assessment Tool (FRAX) from the World Health Organization (WHO) [26,27,28]. BMI was calculated using measured height and weight; smoking state, alcohol intake, regular exercise, family history of osteoporosis or fracture, and medical history of rheumatoid arthritis, osteoporosis, and thyroid disease were obtained by interview in the KNHANES and the NHANES.

3.2. Association between Consumption of Fish and Shellfish and BMD

3.3. Association between Consumption of Fish and Shellfish and Risk of Osteoporosis

The present study found a positive association between the consumption of fish and shellfish and bone health among men and postmenopausal women ≥50 years old in Koreans but not in Americans. Further research is needed to determine the effective intake of fish and shellfish on BMD and the risk of osteoporosis in populations with different genetic backgrounds.

The present study was supported by a Korean Research Foundation grant funded by the Korean Government (grant No. 015R1D1A1A09060823).

E.C. performed statistical analysis and wrote the paper. Y.P. designed the study and reviewed the paper. 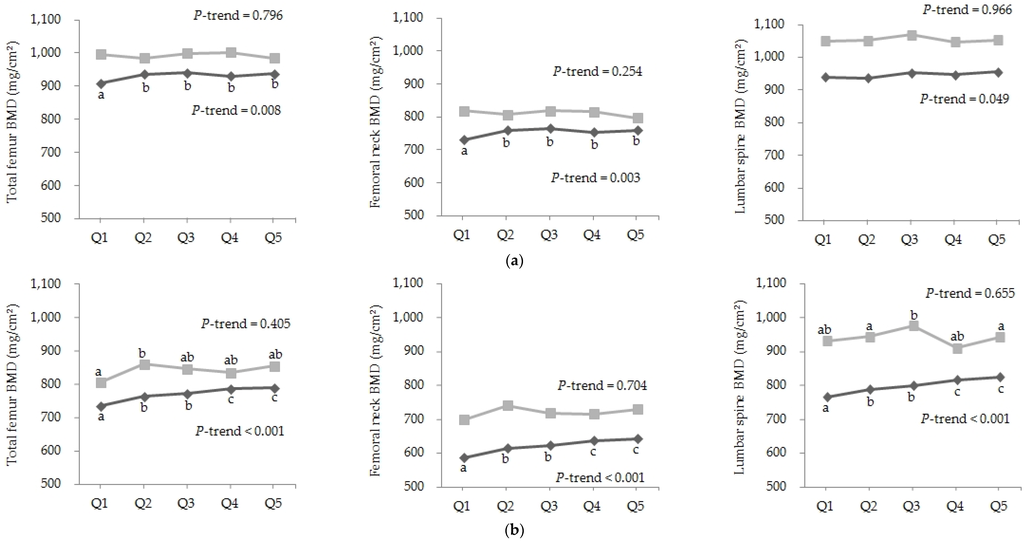 Figure 1. Association between bone mineral density (BMD) and quintile (Q) of the consumption of fish and shellfish (times/month) in men ≥50 years old (a) and postmenopausal women ≥50 years old (b) from the Korean National Health and Nutrition Examination Survey (KNHANES,