α-Linolenic acid (ALA) is the precursor of docosahexaenoic acid (DHA) in humans, which is fundamental for brain and visual function. Western diet provides low ALA and DHA, which is reflected in low DHA in maternal milk. Chia oil extracted from chia (Salvia hispanica L.), a plant native to some Latin American countries, is high in ALA (up to 60%) and thereby is an alternative to provide ALA with the aim to reduce DHA deficits. We evaluated the modification of the fatty acid profile of milk obtained from Chilean mothers who received chia oil during gestation and nursing. Forty healthy pregnant women (22–35 years old) tabulated for food consumption, were randomly separated into two groups: a control group with normal feeding (n = 21) and a chia group (n = 19), which received 16 mL chia oil daily from the third trimester of pregnancy until the first six months of nursing. The fatty acid profile of erythrocyte phospholipids, measured at six months of pregnancy, at time of delivery and at six months of nursing, and the fatty acid profile of the milk collected during the first six months of nursing were assessed by gas-chromatography. The chia group, compared to the control group, showed (i) a significant increase in ALA ingestion and a significant reduction of linoleic acid (LA) ingestion, no showing modification of arachidonic acid (AA), eicosapentaenoic acid (EPA) and DHA; (ii) a significant increase of erythrocyte ALA and EPA and a reduction of LA. AA and DHA were not modified; (iii) a increased milk content of ALA during the six months of nursing, whereas LA showed a decrease. AA and EPA were not modified, however DHA increased only during the first three months of nursing. Consumption of chia oil during the last trimester of pregnancy and the first three months of nursing transiently increases the milk content of DHA. View Full-Text
Keywords: pregnancy and nursing; chia oil; erythrocyte phospholipids; ALA and DHA in milk pregnancy and nursing; chia oil; erythrocyte phospholipids; ALA and DHA in milk
►▼ Show Figures 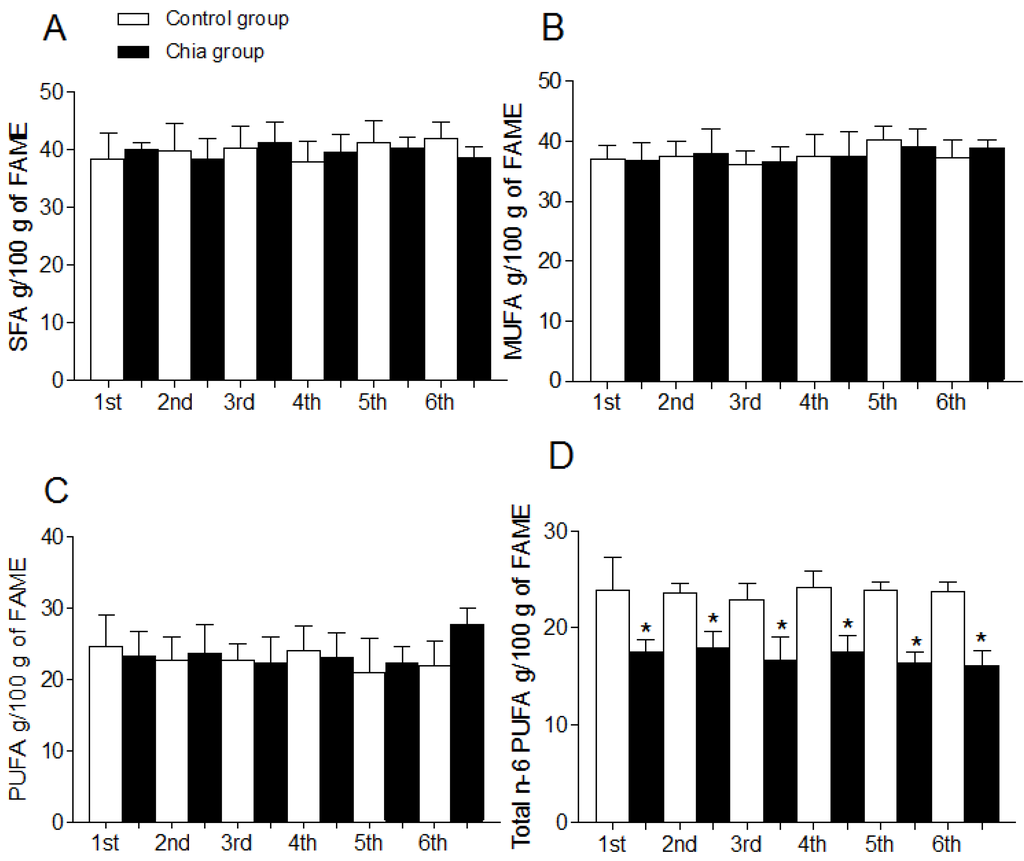