DQ2, DQ7 and DQ8 Distribution and Clinical Manifestations in Celiac Cases and Their First-Degree Relatives
Previous Article in Journal

In Vivo Protective Effects of Diosgenin against Doxorubicin-Induced Cardiotoxicity

Doxorubicin (DOX) induces oxidative stress leading to cardiotoxicity. Diosgenin, a steroidal saponin of Dioscorea opposita, has been reported to have antioxidant activity. Our study was aimed to find out the protective effect of diosgenin against DOX-induced cardiotoxicity in mice. DOX treatment led to a significant decrease in the ratio of heart weight to body weight, and increases in the blood pressure and the serum levels of lactate dehydrogenase (LDH), creatine phosphokinase (CPK) and creatine kinase myocardial bound (CK-MB), markers of cardiotoxicity. In the heart tissue of the DOX-treated mice, DOX reduced activities of antioxidant enzymes, including superoxide dismutase (SOD) and glutathione peroxidase (GPx), were recovered by diosgenin. Diosgenin also decreased the serum levels of cardiotoxicity markers, cardiac levels of thiobarbituric acid relative substances (TBARS) and reactive oxygen species (ROS), caspase-3 activation, and mitochondrial dysfunction, as well as the expression of nuclear factor kappa B (NF-κB), an inflammatory factor. Moreover, diosgenin had the effects of increasing the cardiac levels of cGMP via modulation of phosphodiesterase-5 (PDE5) activity, and in improving myocardial fibrosis in the DOX-treated mice. Molecular data showed that the protective effects of diosgenin might be mediated via regulation of protein kinase A (PKA) and p38. Our data imply that diosgenin possesses antioxidant and anti-apoptotic activities, and cGMP modulation effect, which in turn protect the heart from the DOX-induced cardiotoxicity.
Keywords: doxorubicin; cadiotoxicity; diosgenin; antioxidant; cGMP doxorubicin; cadiotoxicity; diosgenin; antioxidant; cGMP

Doxorubicin (DOX) belongs to the family of anthracyclines, and has been used to against cancer since late 1960s. It is the most effective anticancer drugs. However, studies of cardiotoxic effects of DOX have been reported [1,2]. Therefore, chemotherapy with DOX is limited by its cardiotoxicity. The development of cumulative dose-dependent cardiomyopathy may occur many years after the cessation of DOX treatment. It has been calculated that approximately 10% of patients treated with DOX will develop cardiomyopathy [3,4]. Multiple mechanisms are involved in DOX induced cardiomyopathy, such as the increase in cardiac oxidative stress and lipid peroxidation, and changes in adenylate cyclase activity leading to apoptosis and inflammation-related signaling pathway [5,6]. In previous research, free radical scavengers including probucol, vitamin E and ellagic acid have been demonstrated protection from DOX-induced cardiotoxicity, indicating the roles of reactive oxygen species (ROS) and nuclear factor kappa B (NF-κB) [7,8,9]. Acute DOX cardiotoxicity involves cardiomyocyte apoptosis. It is generally agreed that the elevated oxidative stress induced by DOX activates signaling pathway leading to cardiomyocyte apoptosis [10]. Caspase activity can be influenced by DOX, and caspase-3 activation is associated with DOX administration [11]. Thus, apoptosis plays a role in the development of heart failure via a loss of cardiomyocyte.
Due to the importance of DOX in the chemotherapy treatment for many types of cancer, strategies have been tried to prevent or attenuate the side effects of DOX administration, including the use of DOX analogues, alternative drug-delivery methods, and the iron-chelating agent. But so far, the ability of treatments to prevent or attenuate DOX-induced damage has been limited. Therefore, discovery of novel agents for reducing its side effects is still needed. Several studies in recent years suggest that sildenafil, a selective inhibitor of cyclic guanosine monophosphate (cGMP)-specific phosphodiesterase-5 (PDE5), may give some help against the DOX-induced cardiomyopathy [12,13]. PDE5 inhibitors have been shown to play a critical role against cardiac ischemia-reperfusion (I/R) injuries by activating cGMP-dependent protein kinase signaling pathway [14]. In the heart, cGMP modulates vascular tone, platelet function, cardiomyocyte contraction, mitochondrial function, and stress-response signaling [15].
Diosgenin is a steroidal saponin found in yam [16], the edible tubers of Dioscorea opposita and one of the most used plants in the world. Diosgenin has been shown to have favorable effects on anti-inflammatory [17], lipid metabolism [18], glucose lowering [19], and antioxidant activities [20,21]. Previous studies indicated that a supplementation of food rich in diosgenin, such as a yam variety (called air potato), has been shown to possess the protective effect on myocardial I/R injury in rats due to apoptosis and necrosis [22]. In the literature, diosgenin effectively protected against isoproterenol-induced myocardial necrosis in rats [23]. Moreover, the recent study found that diosgenin abrogated production of intracellular ROS [24]. Another finding suggests that diosgenin has a beneficial role against aortic remodeling induced by oxidative stress in diabetic state and decreases the lipid peroxidation in aorta [25]. Based on the potential role of diosgenin in ameliorating oxidative stress and injury, we attempted to evaluate the beneficial effects of diosgenin against the DOX-induced cardiotoxicity in mice.

Male Balb/c mice, 4–5 weeks old, were obtained from National Laboratory Animal Center (National Science Council, Taipei City, Taiwan). Use of the mice was approved by the guidelines of the Instituted Animal Care and Use Committee of Chung Shan Medical University (IACUC, CSMU). Mice were housed on a 12-h light/dark cycle and fed with mouse standard chow diet (MF-18, Oriental Yeast Co., Ltd. Tokyo, Japan), and then started the experiments after 1-week acclimation. The mice were randomly divided into three groups (ten mice per group) and treated as follows: Group 1, vehicle (normal control); Group 2, DOX at 3 mg/kg of body weight once a week, i.p.; Group 3, DOX with diosgenin at 130 mg/kg of body weight once daily, p.o. (DOX + diosgenin). DOX was administered intraperitoneally to the mice of Groups 2 and 3 at a dose of 3 mg/kg once a week for 4 weeks (a total of 12 mg/kg). At the same time, Group 3 was treated with oral feeding of diosgenin at doses of 130 mg/kg daily for 4 weeks. The doses and injection regiments for these drugs were based on the reports published previously [26] with some modification. At the end of 4 weeks, mice were euthanized by carbon-dioxide asphyxiation followed by exsanguination. The hearts were excised and weighed, and serum and cardiac samples were collected and used for analysis as described below.

Levels of cAMP and cGMP in the heart tissue were assayed with a competitive enzyme immunoassay (Cayman Chemical, Ann Arbor, MI, USA) according to the manufacturer’s protocol.

Total RNA was isolated from cells with a guanidinium chloride procedure as described previously, and the mRNA levels were analyzed by real-time quantitative RT-PCR using a Bio-Rad iCycler system (Bio-Rad, Hercules, CA, USA) [28]. The mRNAs were reverse-transcribed into cDNAs by using an iScript cDNA synthesis kit (Bio-Rad). The specificity of primers was tested by running a regular PCR for 40 cycles at 95 °C for 20 s and 60 °C for 1 min followed by electrophoresis on an agarose gel. The real-time PCR was performed using a SYBR supermix kit (Bio-Rad) and run for 40 cycles at 95 °C for 20 s and 60 °C for 1 min. Each 20-µL PCR mixture contained cDNA template, SYBR supermix kit, and 0.5 µM of each gene-specific primer. Specific primers were designed using Beacon Designer 2.0 software (Table 1). The PCR efficiency was examined by serial dilution of the cDNA, and the PCR specificity was checked by melting curve data. Each cDNA sample was triplicated and the corresponding no-RT mRNA sample was included as a negative control. The GADPH primers were included in every plate to avoid sample variations. The mRNA level of each sample for each gene was normalized to that of the GADPH mRNA.

Proteins from the heart tissues were extracted in RIPA buffer (1% Triton X-100, 150 mmol/L NaCl, 5 mmol/L EDTA, and 10 mmol/L Tris-HCl, pH 7.0) containing a protease inhibitor cocktail. Protein extracts were subjected to centrifugation at 10,000 g for 10 min. Total protein (10–50 μg per lane) was electrophoresed and separated on 8%–15% SDS-poly-acrylamide gels and transferred to nitrocellulose membranes. After blocking with 5% nonfat dry milk, the membranes were incubated with the indicated primary antibodies overnight at 4 °C. The blots were incubated with the antibodies against caspase-3, phospho-PKA, PKA, phospho-p38, p38 and β-actin, purchased from Santa Cruz Biotechnology, Inc. (Santa Cruz, CA, USA). β-actin served as an internal control. The blot was quantified by enhanced chemiluminescence detection (Amersham Pharmacia Biotech, Little Chalfont, Bucks, UK).

3.3. Diosgenin Improved DOX-Regulated Levels of cAMP and cGMP, and mRNA Expression of PDE5A

It is well known that cGMP exerts its effects by interacting with PDE, and cGMP-dependent signaling plays an important protective role in cardiac injury [14,15]. As compared with the control, treatment with DOX decreased the levels of cAMP and cGMP in the heart, especially the later (p < 0.05) (Figure 1A). Diosgenin augmented the cGMP and cAMP levels as compared with DOX alone (p < 0.05). Moreover, the cardiac mRNA expression of PDE5A was increased after a four-week treatment of DOX, whereas that of PDE3A was slightly affected. Treatment with diosgenin also attenuated both mRNA expressions compared to DOX alone (p < 0.05) (Figure 1B).

To investigate whether the protective effect of diosgenin against DOX occurred because it inhibited apoptotic pathways, we further studied the change in the expression of caspase-3, one marker of apoptosis, in the heart tissue (Figure 2A). Caspase-3 is a cytosolic protein that exists normally as an inactive precursor with a higher molecular weight (about 32 kDa). It is cleaved proteolytically into low molecular weights (11, 17, and 20 kDa) when a cell undergoes apoptosis [31]. In this study, treatment with DOX induced significantly an increase in cleavage of caspase-3 to 1.53-fold of that of control. In the diosgenin co-treated group, the active fragment was decreased (Figure 2A). As shown in Figure 2B (lane 2), DOX increased significantly the cytosolic concentration of cytochrome c, with a concomitant decrease in the mitochondria, implicating mitochondrial dysfunction due to DOX toxicity [32]. Quantitative data showed that the cytosolic concentration of cytochrome c was increased to 1.87-fold of that of control in the heart tissues of the DOX-treated mice. This effect was significantly suppressed in the DOX plus diosgenin group (lane 3, Figure 2B). The DOX-induced release of cytochrome c from mitochondria was inhibited by 81.6% in the DOX plus diosgenin group. In addition, mRNA expressions of NF-κB and transforming growth factor-beta (TGF-β), two factors that are related to inflammation, were measured by real-time PCR. DOX treatment augmented the cardiac mRNA expression of NF-κB, but not TGF-β. However, when mice were co-treated with diosgenin, concomitant decreases in their expressions were observed, as compared to the DOX treated group (p < 0.05).

Previous studies found that cAMP-protein kinase A (PKA) pathway promoted cardiomyocyte survival [33]. It has also been shown that p38 mitogen-activated protein kinases (MAPK) pathway is involved in the DOX-induced cardiac oxidative, inflammatory and apoptotic reactions [34]. Consequently, we examined the phosphorylation of PKA and p38, and their total protein levels by Western blotting. As shown in Figure 3, the expressions of phospho-PKA, PKA (Figure 3A), phospho-p38, and p38 (Figure 3B) showed significant increases of about 1.62-, 1.33-, 1.84-, and 1.08-folds, respectively, in the DOX treated group, whereas diosgenin treatment modulated the activation of both protein kinases that were elevated in the presence of DOX (Figure 3). 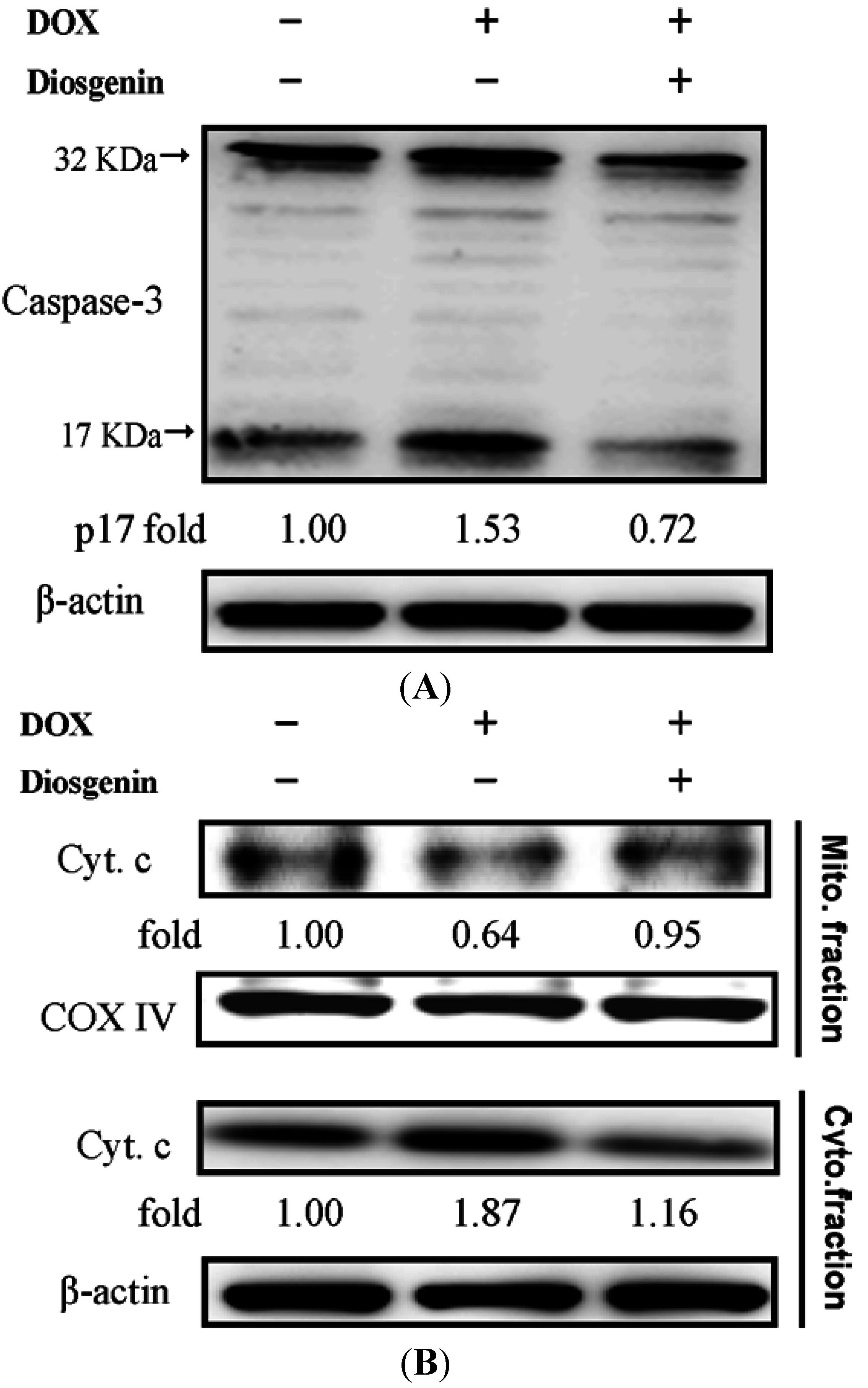 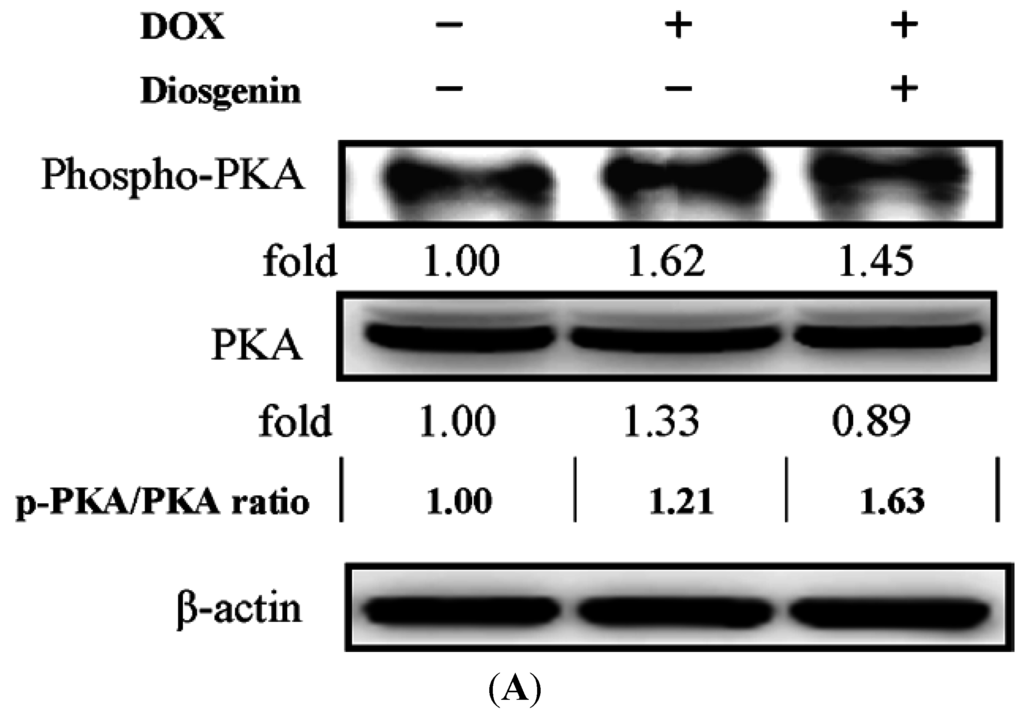 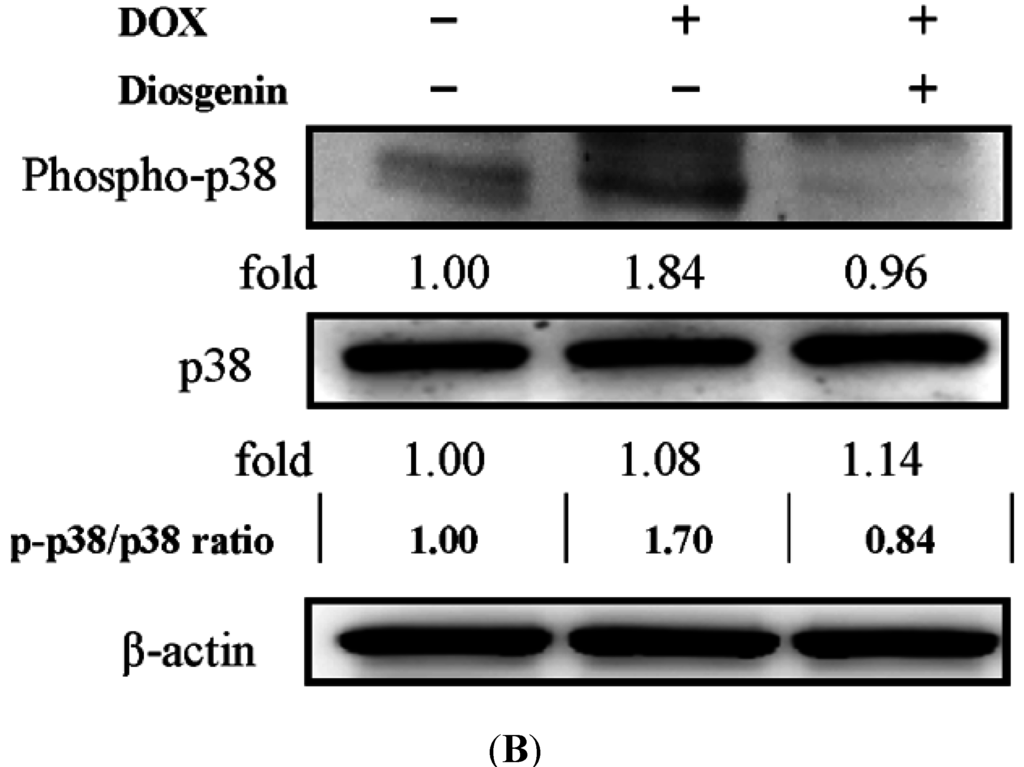 Supplemental Figure S1—Effect of diosgenin on TBARS (A) and GSH (B) levels in kidney tissues of mice treated with DOX for 4 weeks.