In traditional Asian medicine, bear bile extracted from the gallbladder of Ursus thibetanus or Ursus arctos is considered a cure for various diseases. With the development of modern medicine, it is found that the major active component in bear bile is ursodeoxycholic acid (UDCA) [1]. Nowadays, synthetic UDCA is a safe drug with no side effects and is widely used in the treatment of diseases, such as gallstones, primary cirrhosis, autoimmune hepatitis and colon cancer around the world [2].
Oral cancers are common malignant tumors in the head and neck and are mostly categorized as squamous cell carcinomas, in which the mucous membranes in the gum, tongue, and face transform and progress to cancer [3]. There are many causes of oral cancers, including poor oral hygiene caused by bad living habits and chronic ulcers in gum tissue. Due to the long-term intake of a high-fat, high-protein, and low-cellulose diet, each organ in the digestive system functions abnormally, producing a large amount of harmful bacteria leading to a large number of harmful bacteria growing in the mouth, which produce carcinogens that cause oral cancers [4]. Chronic inflammation, from, for example, gingivitis and periodontitis, may be another cause of oral cancer [5]. Written in ancient Chinese medical books, bear bile can treat bacterial diseases through sterilization. Laboratory experiments further confirmed that the main component of bear bile, UDCA, has the effect of sterilization and inhibition of inflammation [1]. Bamboo salt UDCA toothpastes appear on the market in China and South Korea, and clinical surveys prove that UDCA can prevent gum and periodontal problems and reduce gum bleeding. Therefore, UDCA may be useful in treating oral cancers.
Inducing cancer cell apoptosis is one way to control cancer, so it is beneficial for the treatment of oral cancers to increase activation, expression, and regulation of caspase family genes leading to death of oral cancer cells [6]. Although the detailed mechanism of apoptosis is not entirely clear, it has been identified that caspases play an indispensable role in apoptosis. The apoptotic process is actually the cascading amplification of caspase hydrolysis of their substrates [7]. Using UDCA to strengthen caspase activity may be a new way for the treatment of oral cancers by inducing apoptosis of oral cancer cells. In this study, through using UDCA treatment in vitro on cultured cancer cells, changes in caspase gene expression of cancer cells are detected and the effect of UDCA on inducing cancer cell apoptosis is observed.

HSC-3 cell solution (2 mL) was added to a 10 cm culture dish and incubated at 37 °C in 5% CO2 for 24 h. Then the culture medium was aspirated and discarded, followed by addition of the UDCA culture medium solutions (100, 200 and 400 μg/mL) and cultured for 48 h. UDCA untreated control cells and cells treated with the UDCA were harvested, washed with PBS twice, and fixed with 3.7% paraformaldehyde (Sigma; St. Louis, MO, USA) in PBS for 10 min at 25 °C. The fixed cells were washed with PBS and stained with 1 mg/mL DAPI (Sigma) solution for 10 min. The cells were washed 3 times with PBS and examined with a fluorescence microscope (BX50; Olympus, Tokyo, Japan) [10].

Total RNA from HSC-3 cells was isolated using Trizol reagent (Invitrogen; Carlsbad, CA, USA) according to the manufacturer’s recommendations. The cancer cell RNA was digested with RNase-free DNase (Roche; Basel, Switzerland) for 15 min at 37 °C and purified using the RNeasy kit (Qiagen; Hilden, Germany) according to the manufacturer’s protocol. cDNA was synthesized from 2 μg of total RNA by incubation at 37 °C for l h with avian myeloblastosis virus reverse transcriptase (GE Healthcare; Little Chalfont, United Kingdom) with random hexanucleotides according to the manufacturer’s instruction. Sequences of primers used to specifically amplify the genes of interest are shown in Table 1. Amplification was performed in a thermal cycler (Eppendorf; Hamburg, Germany). The polymerase chain reaction (PCR) products were separated in 1.0% agarose gels and visualized with ethidium bromide staining [11].

Table 1. Sequences of reverse transcription-polymerase chain reaction primers were used in this study.

Data are presented as mean ± standard deviation (SD). Differences between the mean values for individual groups were assessed with one-way analysis of variance (ANOVA) with Student-Neumann-Keuls post-hoc test, and the data were tested for a two-sided statistical testing. p < 0.01 and p < 0.05 were considered to indicate a statistically significant difference. SPSS software 19.0 (IBM Software; New York, NY, USA) was used for statistical analyses.

3.2. Induction of Apoptosis by UDCA

To determine a possible mechanism underlying the growth inhibitory activity of UDCA in HSC-3 oral cancer cells, the induction of apoptosis was explored. The extent of chromatin condensation was analyzed by fluorescence microscopy of cells stained with the DNA-binding fluorescent dye DAPI and flow cytometric analysis. While the untreated HSC-3 cancer cells presented nuclei with homogeneous chromatin distribution, treatment with UDCA induced chromatin condensation and nuclear fragmentation, which suggests initiation of apoptosis. At a high concentration of 400 μg/mL, the UDCA treated HSC-3 cells underwent apoptosis and only a small amount of HSC-3 cancer cells were not affected. (Figure 2A). Chromatin condensation and the formation of apoptotic bodies, two hallmarks of apoptosis, were observed in cells cultured with 200 and 400 μg/mL of UDCA. In contrast, the level of chromatin condensation was low in the untreated control cells. Flow cytometric analyses revealed that treatment with UDCA promoted apoptosis of the HSC-3 cells compared with incubation with control cells. This conclusion is based on the significant accumulation of 100, 200 and 400 μg/mL treated cancer cells with sub-G1 DNA content at 10.6%, 22.4% and 41.3% compared to the control cells (2.7%) (Figure 2B). 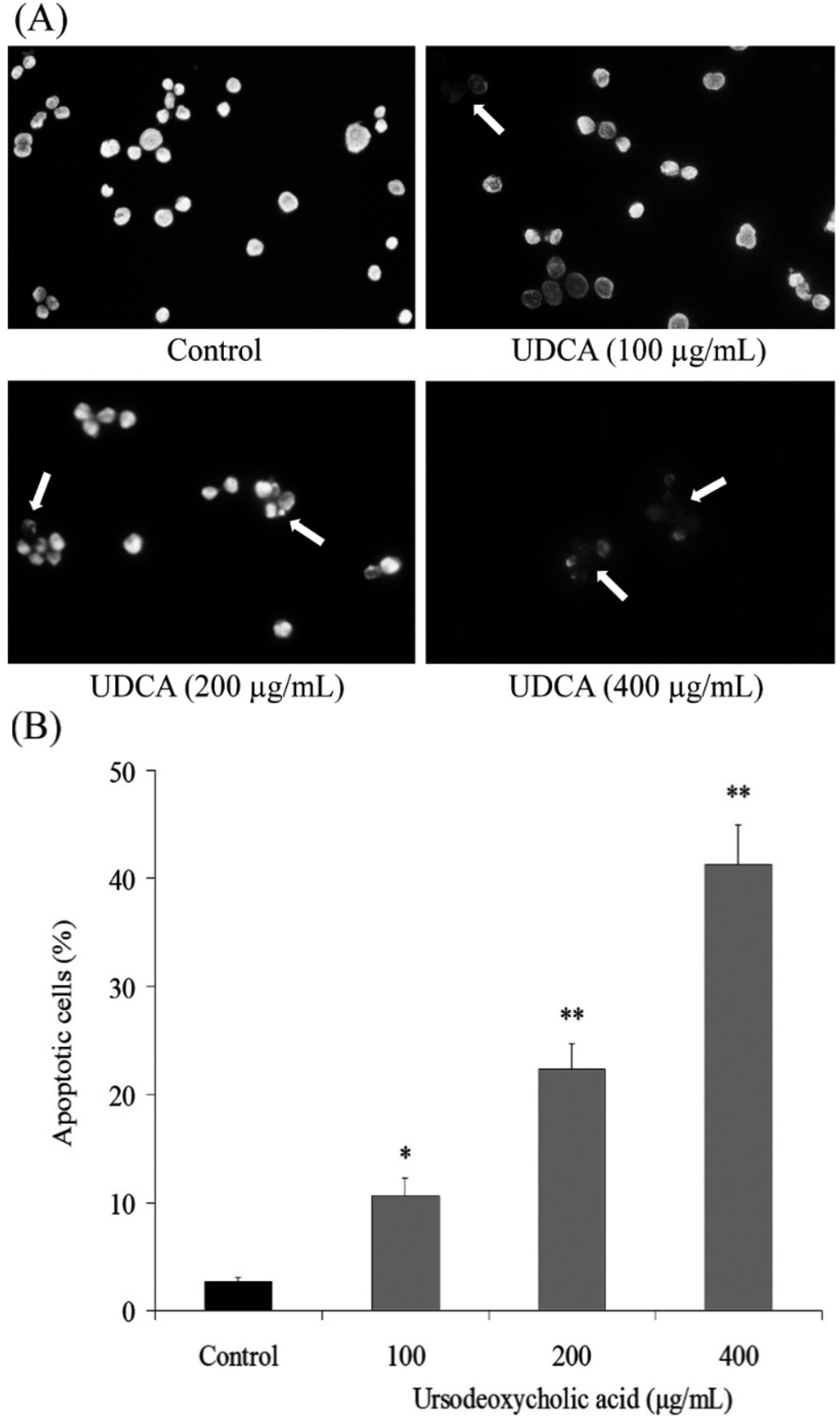 The mRNA expression of caspase-3, caspase-8 and caspase-9 in HSC-3 oral cancer cells were analyzed by RT-PCR and Western blot assays. After UDCA treatment, the mRNA and protein expression of caspase-3, caspase-8 and caspase-9 were increased compare to the control cells, and these changes were increased in a concentration-dependent manner (Figure 3). 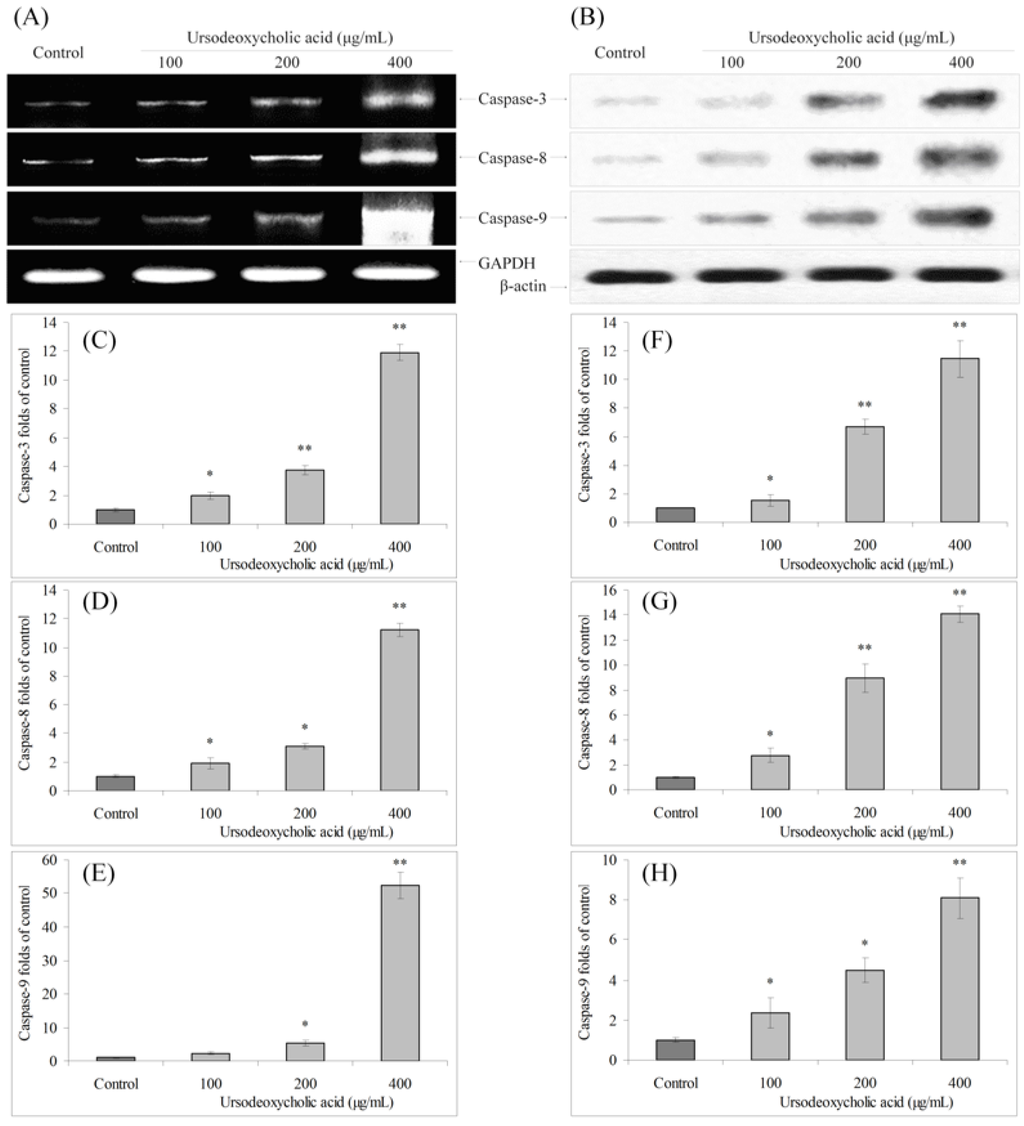 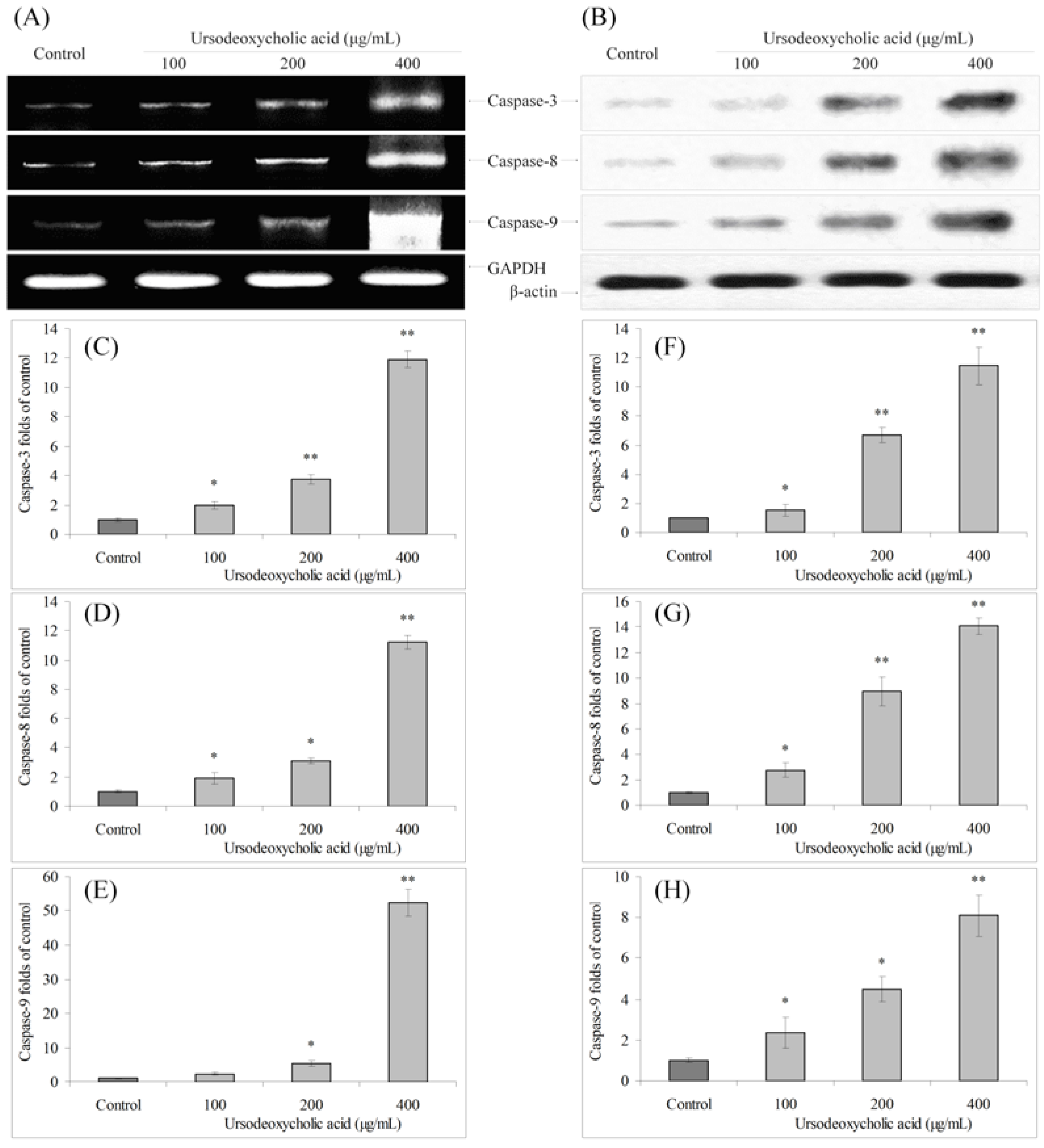 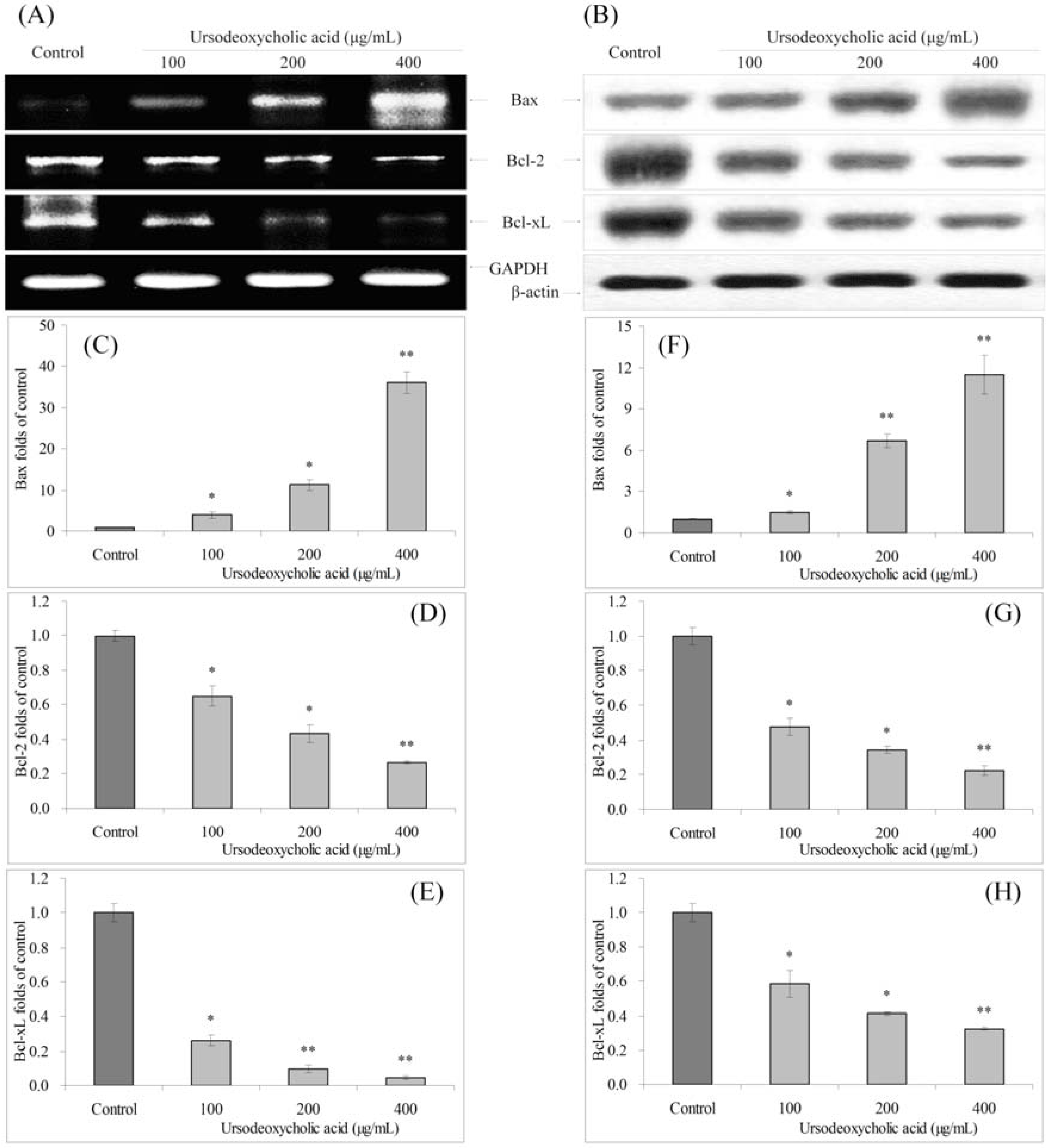 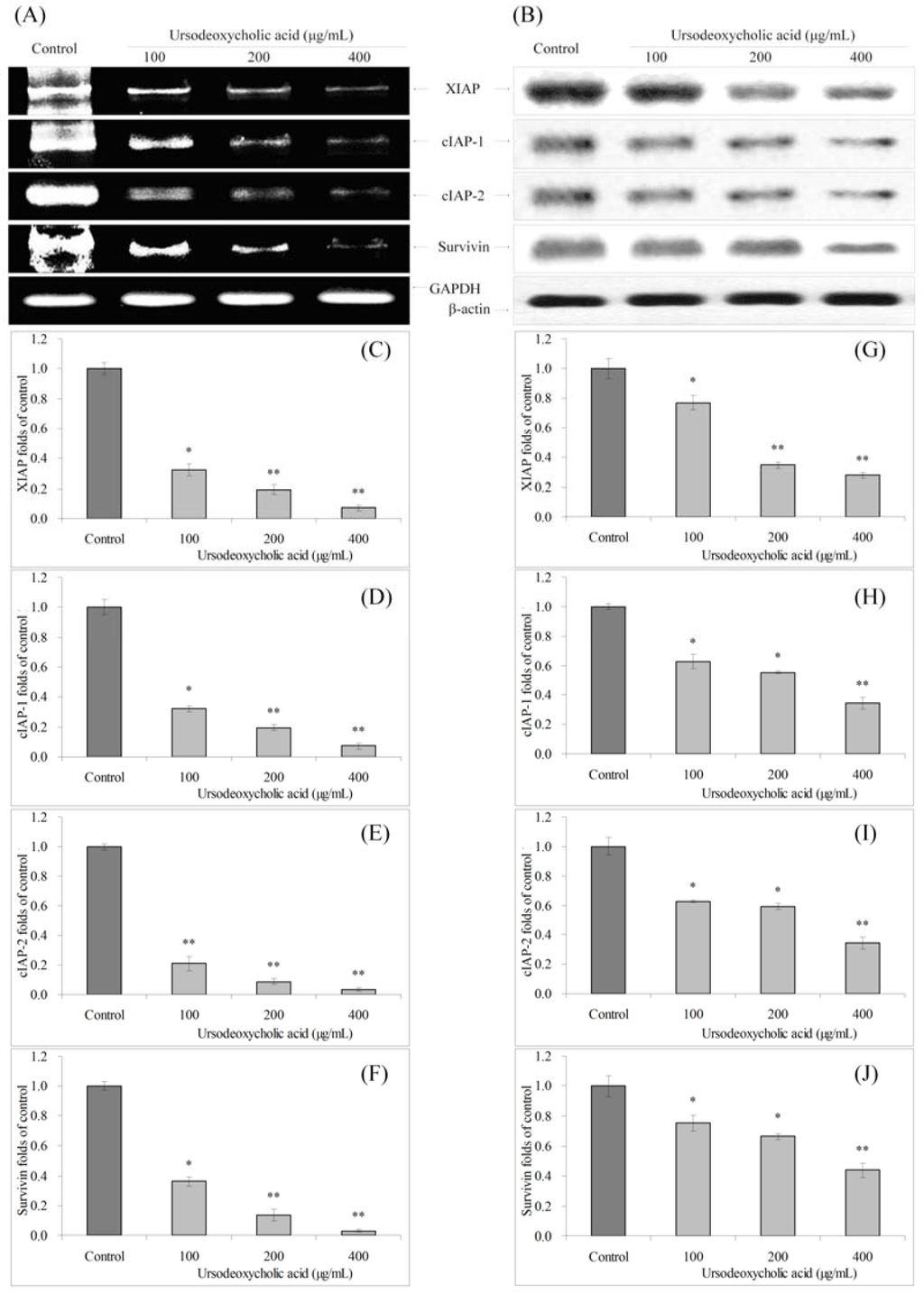 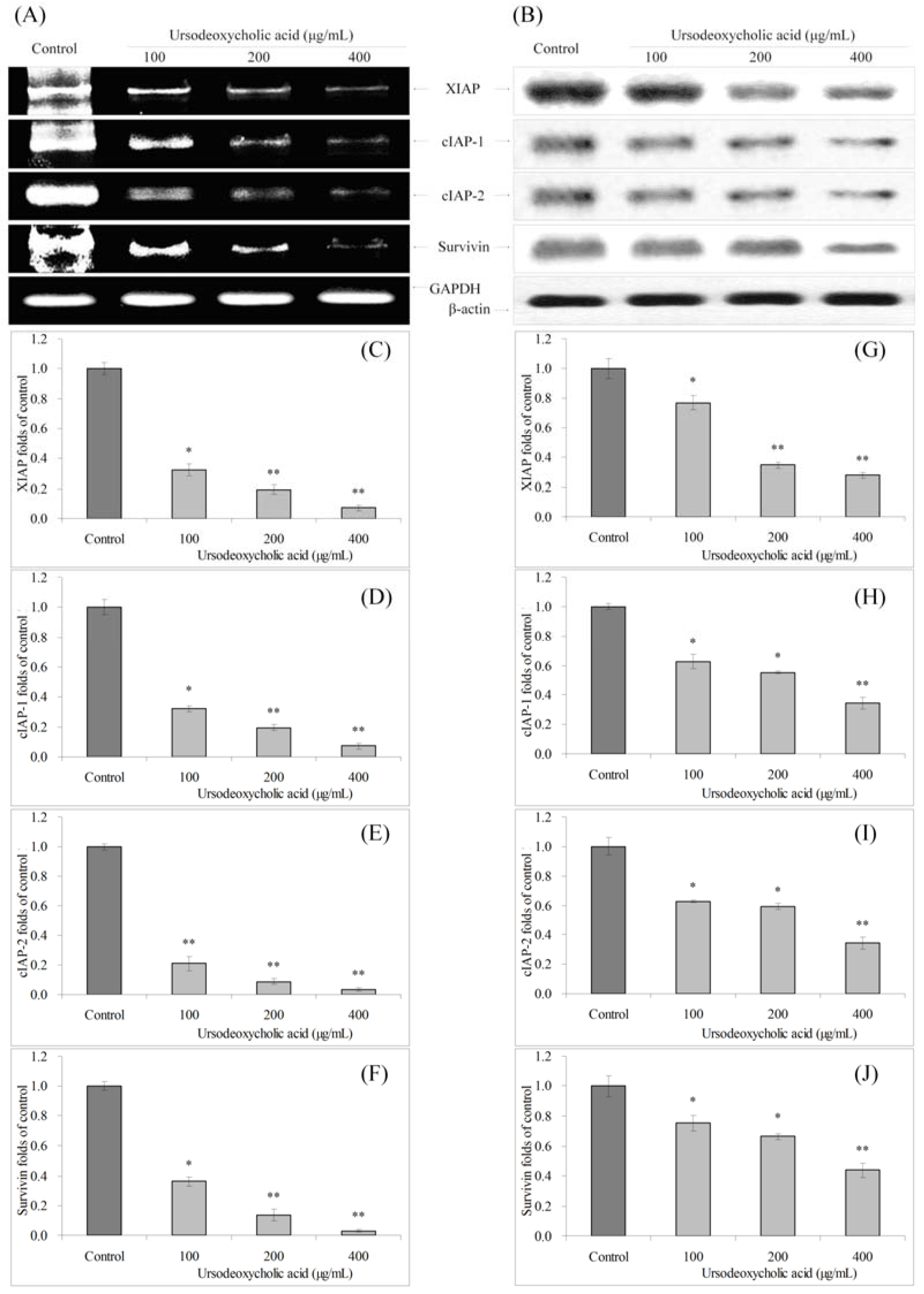 3.6. Gene Expression of Fas and FasL 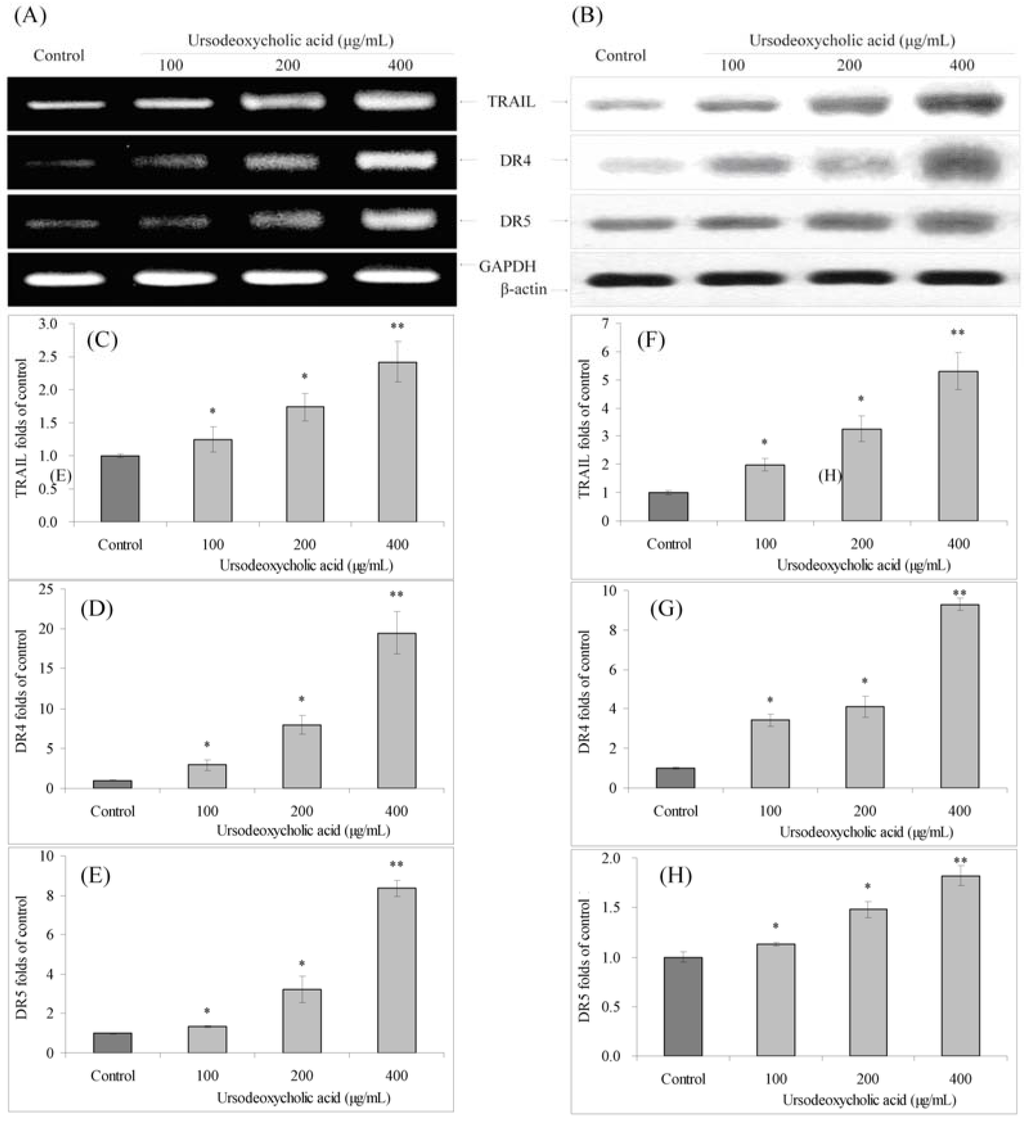 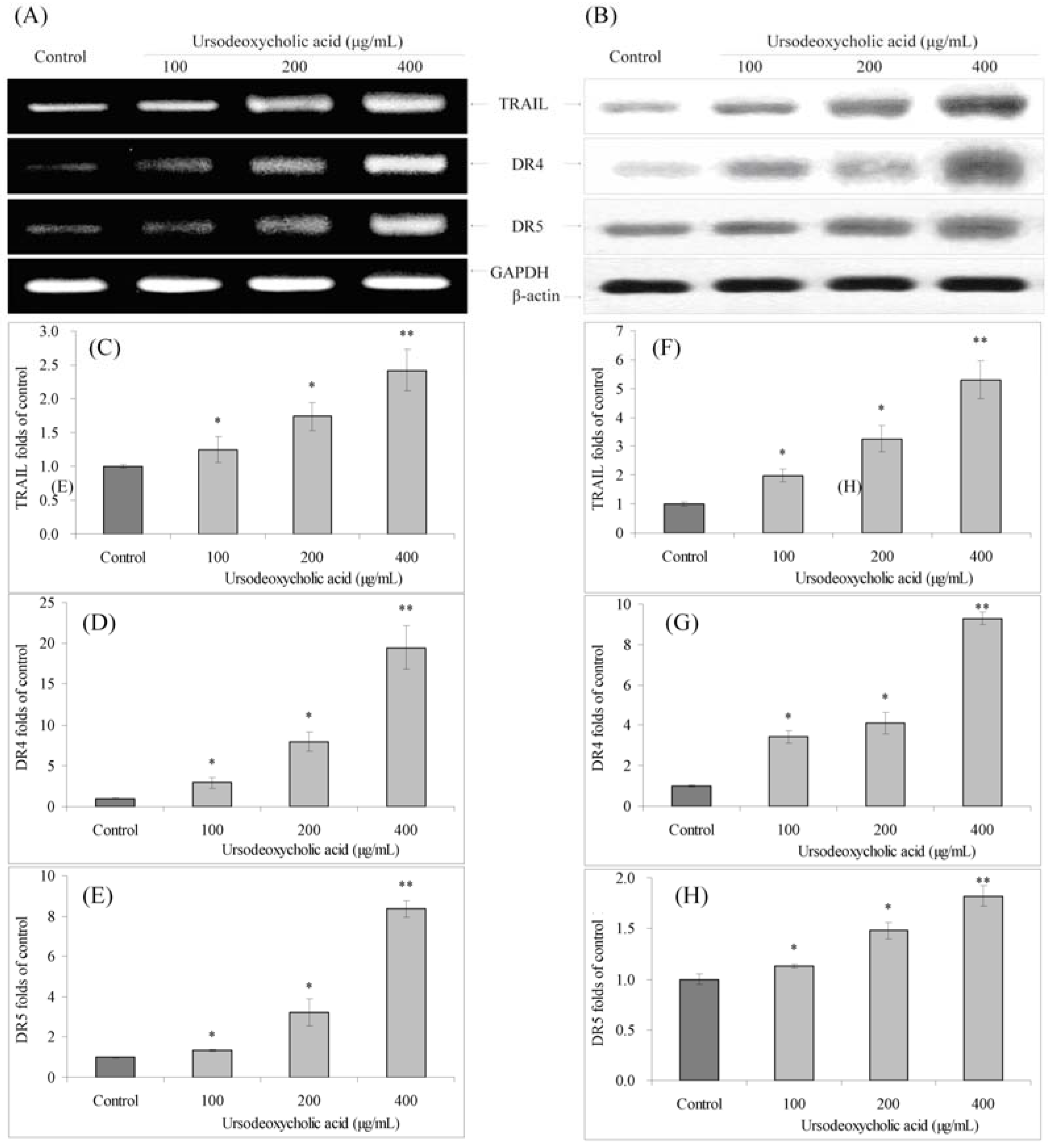 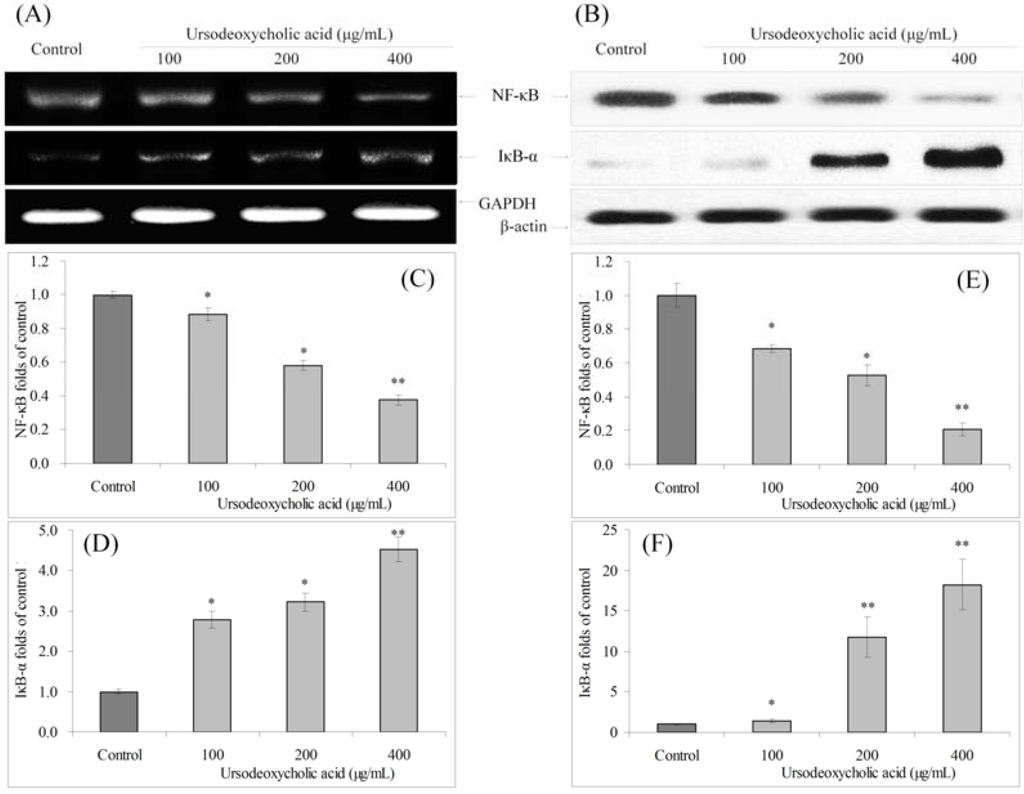 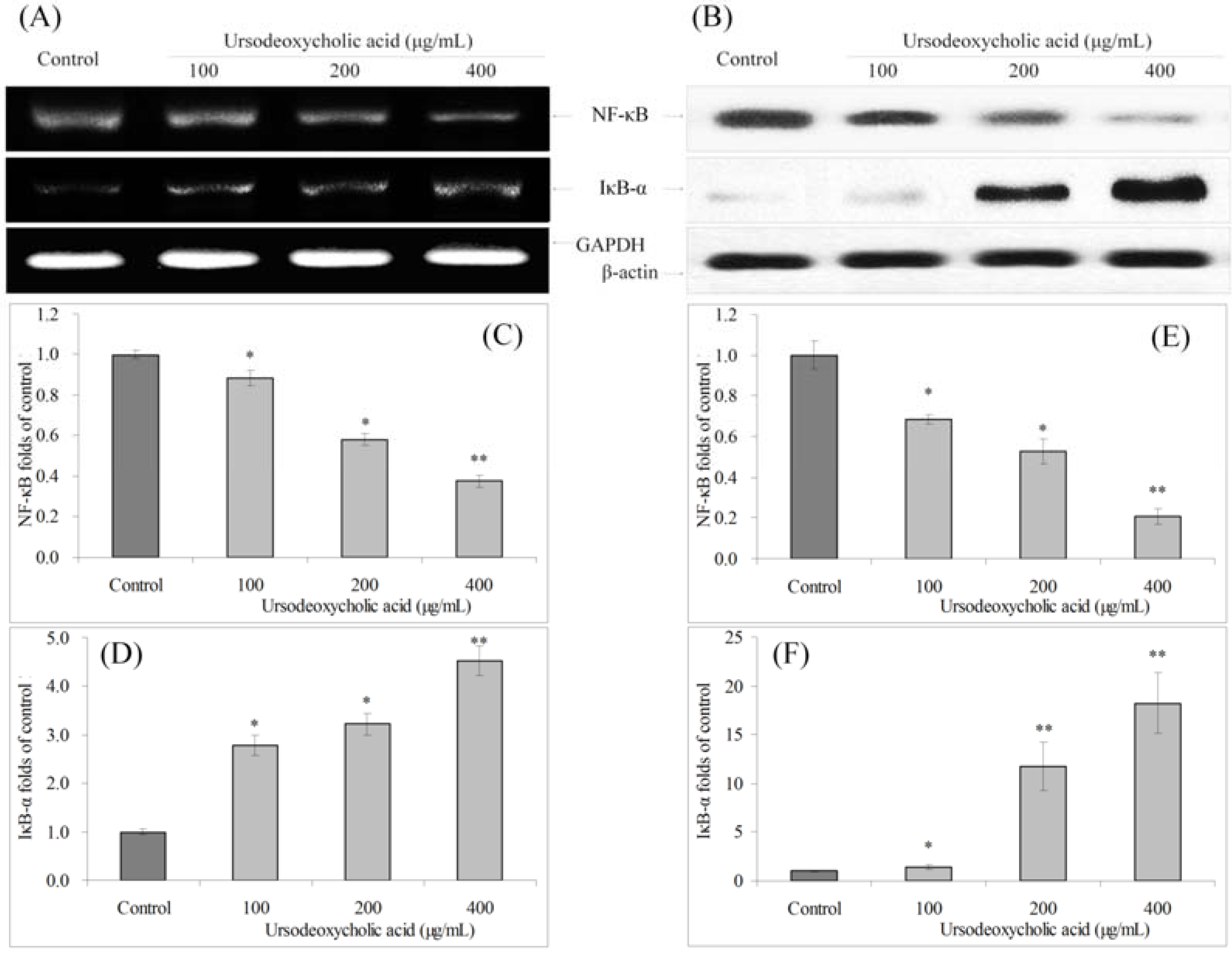 As a monomeric material, UDCA has been introduced as treatment for various diseases, while the mechanism of the monomeric materials needs further research. By evaluating changes in gene and protein expression in cancer cells with UDCA treatment, we show that UDCA can be applied for the treatment of oral cancers. Preliminary in vitro experiments confirm that UDCA can induce cancer cell apoptosis by promoting caspase-3, caspase-8, caspase-9, Bax, Fas/FasL, TRAIL, DR4, DR5 and IκB-α gene expression in cancer cells, and reduce the expression of Bcl-2, Bcl-xL, XIAP, cIAP-1, cIAP-2, survivin and NF-κB.

This research was supported by Chongqing Medical Scientific and Technological Project (2011-1-060), China.

The work presented here was carried out in collaboration between all authors. Liang Pang and Lihua Qiu defined the research theme. Liang Pang, Xin Zhao, Weiwei Liu and Lihua Qiu designed methods and experiments, carried out the laboratory experiments, analyzed the data, interpreted the results and wrote the paper. Jiang Deng and Xiaotong Tan co-designed the dispersal and colonization experiments, and co-worked on associated data collection and their interpretation. All authors have contributed to, seen and approved the manuscript.