Unique Features of High-Density Lipoproteins in the Japanese: In Population and in Genetic Factors
Previous Article in Special Issue

Chronic Iron Deficiency as an Emerging Risk Factor for Osteoporosis: A Hypothesis

Limited evidence exists for an association between maternal diet during pregnancy and offspring bone health. In a prospective study, we examined the association between dietary patterns in mid-pregnancy and offspring forearm fractures. In total, 101,042 pregnancies were recruited to the Danish National Birth Cohort (DNBC) during 1996–2002. Maternal diet was collected by a food frequency questionnaire. Associations were analyzed between seven dietary patterns extracted by principal component analysis and offspring first occurrence of any forearm fracture diagnosis, extracted from the Danish National Patient Register, between time of birth and end of follow-up (<16 year) (n = 53,922). In multivariable Cox regression models, offspring of mothers in the fourth vs. first quintile of the Western pattern had a significant increased risk (Hazard ratio, 95% confidence interval: 1.11, 1.01–1.23) of fractures, and there was a borderline significant positive trend (p = 0.06). The other dietary patterns showed no associations and neither did supplementary analyses of macro- and micronutrients or single food groups, except for the intake of artificially sweetened soft drinks, which was positively associated with offspring forearm fractures (p = 0.02). In the large prospective DNBC high mid-pregnancy consumption of Western diet and artificially sweetened soft drinks, respectively, indicated positive associations with offspring forearm fractures, which provides interesting hypotheses for future research. View Full-Text
Keywords: maternal diet; dietary patterns; bone fractures; epidemiology; pregnancy; fetal programming; artificial sweetener maternal diet; dietary patterns; bone fractures; epidemiology; pregnancy; fetal programming; artificial sweetener
►▼ Show Figures 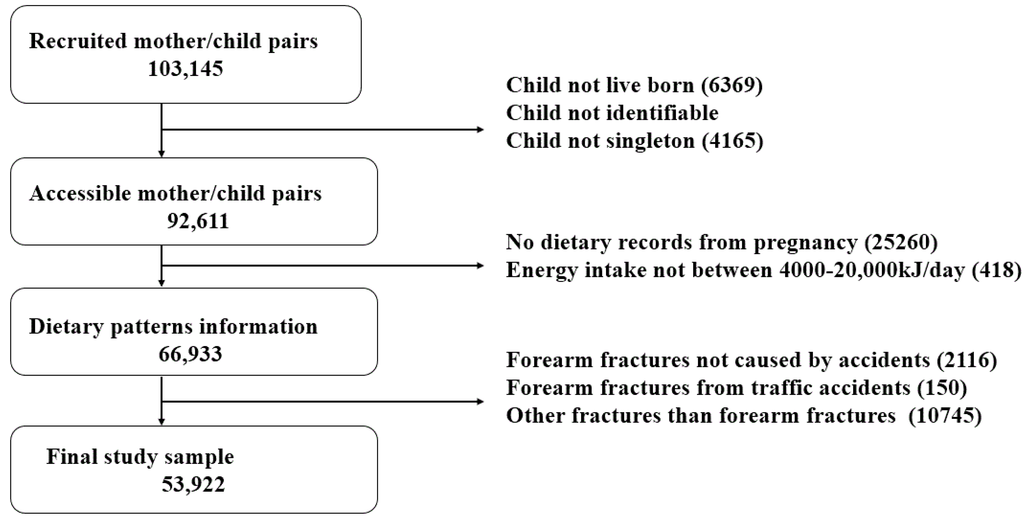