Background: Intestinal exposure to gliadin leads to zonulin upregulation and consequent disassembly of intercellular tight junctions and increased intestinal permeability. We aimed to study response to gliadin exposure, in terms of barrier function and cytokine secretion, using intestinal biopsies obtained from four groups: celiac patients with active disease (ACD), celiac patients in remission (RCD), non-celiac patients with gluten sensitivity (GS) and non-celiac controls (NC). Methods: Ex-vivo human duodenal biopsies were mounted in microsnapwells and luminally incubated with either gliadin or media alone. Changes in transepithelial electrical resistance were monitored over 120 min. Media was subsequently collected and cytokines quantified. Results: Intestinal explants from all groups (ACD (n = 6), RCD (n = 6), GS (n = 6), and NC (n = 5)) demonstrated a greater increase in permeability when exposed to gliadin vs. media alone. The increase in permeability in the ACD group was greater than in the RCD and NC groups. There was a greater increase in permeability in the GS group compared to the RCD group. There was no difference in permeability between the ACD and GS groups, between the RCD and NC groups, or between the NC and GS groups. IL-10 was significantly greater in the media of the NC group compared to the RCD and GS groups. Conclusions: Increased intestinal permeability after gliadin exposure occurs in all individuals. Following gliadin exposure, both patients with gluten sensitivity and those with active celiac disease demonstrate a greater increase in intestinal permeability than celiacs in disease remission. A higher concentration of IL-10 was measured in the media exposed to control explants compared to celiac disease in remission or gluten sensitivity. View Full-Text
Keywords: celiac disease; gluten sensitivity; IL-10 celiac disease; gluten sensitivity; IL-10
►▼ Show Figures 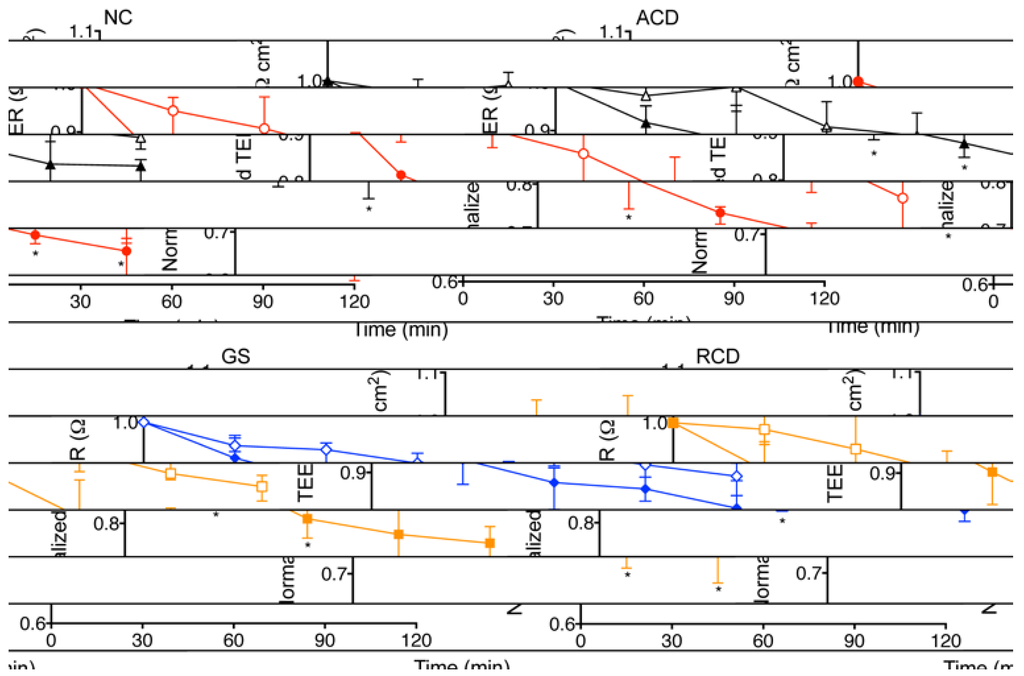