25-Hydroxyvitamin D and Its Relationship with Autonomic Dysfunction Using Time- and Frequency-Domain Parameters of Heart Rate Variability in Korean Populations: A Cross-Sectional Study

There is an urgent need to treat individuals with high blood pressure (BP) with effective dietary strategies. Previous studies suggest a small, but significant decrease in BP after lactotripeptides (LTP) ingestion, although the data are inconsistent. The study aim was to perform a comprehensive meta-analysis of data from all relevant randomised controlled trials (RCT). Medline, Cochrane library, EMBASE and Web of Science were searched until May 2014. Eligibility criteria were RCT that examined the effects of LTP on BP in adults, with systolic BP (SBP) and diastolic BP (DBP) as outcome measures. Thirty RCT met the inclusion criteria, which resulted in 33 sets of data. The pooled treatment effect for SBP was −2.95 mmHg (95% CI: −4.17, −1.73; p < 0.001), and for DBP was −1.51 mmHg (95% CI: −2.21, −0.80; p < 0.001). Sub-group analyses revealed that reduction of BP in Japanese studies was significantly greater, compared with European studies (p = 0.002 for SBP and p < 0.001 for DBP). The 24-h ambulatory BP (AMBP) response to LTP supplementation was statistically non-significant (p = 0.101 for SBP and p = 0.166 for DBP). Both publication bias and “small-study effect” were identified, which shifted the treatment effect towards less significant SBP and non-significant DBP reduction after LTP consumption. LTP may be effective in BP reduction, especially in Japanese individuals; however sub-group, meta-regression analyses and statistically significant publication biases suggest inconsistencies. View Full-Text
Keywords: lactotripeptides; isoleucine-proline-proline (IPP); valine-proline-proline (VPP); blood pressure; meta-analysis lactotripeptides; isoleucine-proline-proline (IPP); valine-proline-proline (VPP); blood pressure; meta-analysis
►▼ Show Figures 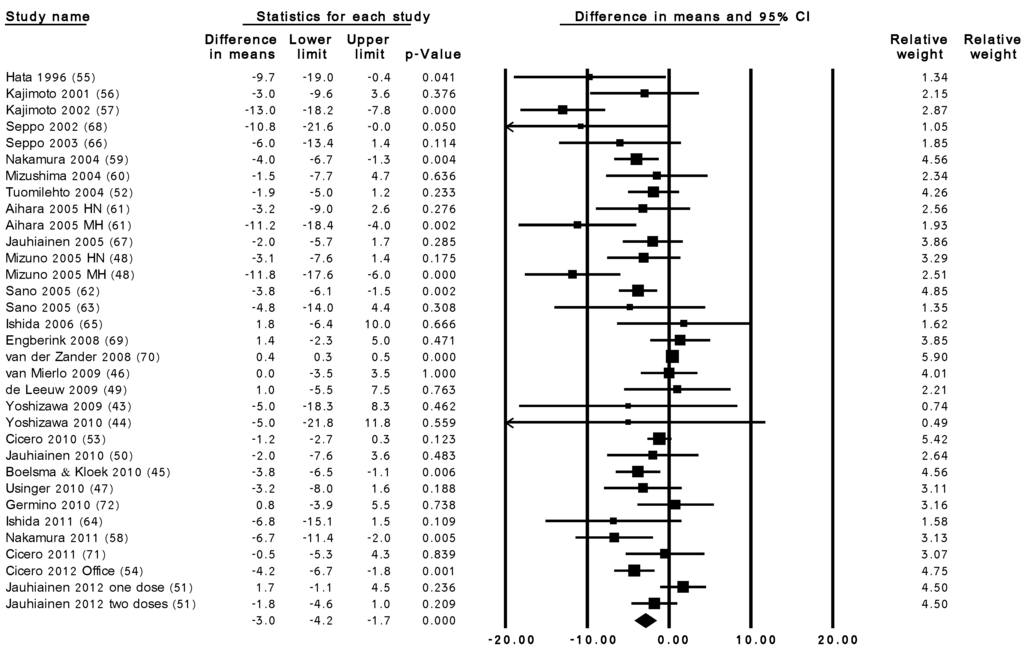