Effect of Tea Theaflavins and Catechins on Microvascular Function

Beneficial effects of flavonoid-rich black and green tea on macrocirculation have been well established. Theaflavins are unique to black tea as they are formed from catechins during the enzymatic oxidation of tea leaves. The study was performed to gain more insight into the effects of theaflavins on microcirculation and to compare effects with another important flavonoid class, the green tea derived catechins, which have been reported to improve vascular function. Twenty-four healthy subjects were included in a double-blind, placebo-controlled, randomised, cross-over study. On six different days, subjects received capsules with a single dose of catechins (500 mg), four varying doses of theaflavins (100 to 500 mg) or placebo. Microcirculation was assessed after each treatment by Pulse Amplitude Tonometry (EndoPAT) at baseline and 2, 4 and 6 h after test product intake. The EndoPAT reactive hyperemia response was improved by 500 mg catechins (reactive hyperemia index (RHI): 0.2; p = 0.04) and by 500 mg theaflavins (RHI: 0.19; p = 0.06) compared to placebo. Also, 300 mg theaflavins increased the RHI (0.28; p = 0.02), but no effects were observed at lower doses. The study suggests moderate effects of single doses of catechins and theaflavins on peripheral microcirculation. View Full-Text
Keywords: tea; theaflavins; catechins; polyphenols; vascular function; EndoPAT; reactive hyperemia response tea; theaflavins; catechins; polyphenols; vascular function; EndoPAT; reactive hyperemia response
►▼ Show Figures 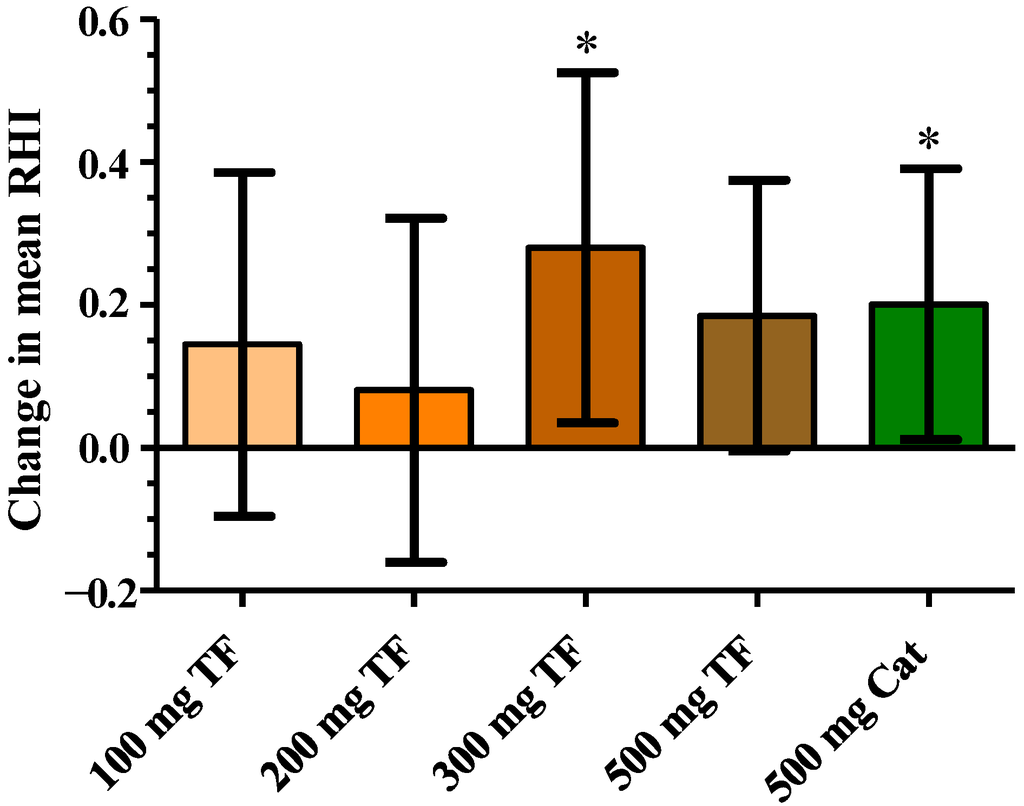