Fermented soybean paste is commonly used as a dipping condiment or flavor seasoning in various soups and stews in Korea. In 2009, this Korean soybean paste was registered in CODEX Alimentarius, a collection of international food standards and guidelines, and became an internationally accepted food [1]. For the past years, its popularity has increased due to its distinct flavor and high nutritional value. It is rich in essential amino acids, minerals, and vitamins [2]. Furthermore, studies have shown that fermented paste and other fermented soybean products contain higher protein and phenolic contents, stronger antioxidant effect, and greater antimutagenic and anticancer activities than raw and cooked soybeans [3,4,5].
Rice, the second most widely grown cereal crop in the world, is mostly produced and consumed in Asia. However, the consumption of rice is steadily declining in Asian countries, particularly in Korea, due to the changing dietary habits. To increase rice consumption, alternative ways of using rice in food preparations are continuously being explored by scientists and researchers. As a result, rice-based value-added products, such as rice flour, breakfast cereals, rice noodles, and rice milk, have been developed. Rice bran is a by-product of the rice milling industry and commonly used as animal feed. It has various health-promoting properties including hypolipidemic, hypoglycemic, and antioxidative activities [6,7,8]. Red ginseng marc, on the other hand, is a by-product of ginseng extract production. It is often discarded as waste but studies have shown that it possesses pharmacological properties like immunomodulatory and anti-cancer effects [9,10].
In the present study, fermented paste was prepared using brown rice, instead of soybean, as the main component. With the reported functional properties of rice bran and red ginseng marc, a fermented paste using brown rice in combination with these by-products was also prepared. A number of studies revealed that fermented brown rice and rice bran have health beneficial effects, including anti-tumor and anti-cancer activities [11,12,13]. Moreover, fermented red ginseng marc has been shown to have strong antioxidant effect [14]. The development of rice fermented paste with added rice bran or red ginseng marc may not only increase the market value and consumption of rice, but it may also increase the utilization of rice bran and red ginseng marc and provide health beneficial effects that are comparable with that of the soybean fermented paste. It is therefore essential to have knowledge and understanding on the physiological and metabolic activities of fermented rice paste. A previous investigation on fermented paste made from brown rice revealed that it could suppress body weight gain and improve the lipid profile in high fat diet-fed mice and these physiological effects were further enhanced with the inclusion of rice bran or red ginseng marc [15].
Fermented soybean products have been reported to exhibit antidiabetic effects and antioxidant activity [1,16]. However, studies on fermented paste in relation to glucose metabolism and antioxidative properties are limited. With the growing global problem of diabetes and hyperglycemia, there is an increasing demand for natural products and functional foods with hypoglycemic activity and strong antioxidant property. This study was carried out to investigate the comparative effects of fermented paste prepared from fermented soybean, brown rice, and brown rice with added rice bran or red ginseng marc on the glucose metabolism and antioxidative defense system in mice under a high fat diet condition.

The brown rice (BR) fermented paste was prepared according to the manufacturing process for commercial fermented paste with some modifications [17]. Briefly, the rice grains were washed, soaked in water for 3 h at 4 °C, and cooked using an electric rice cooker. After cooling, the cooked rice was inoculated with A. oryzae (0.2%, w/w) and incubated for 3 days at 30 °C. Salt was added to the resulting koji (12%, w/w), mixed using a food processor, and fermented and ripened for 30 days at 30 °C. The same method was used for the preparation of the brown rice-rice bran (BRB) and brown rice-red ginseng marc (BRG) fermented paste samples. The rice bran and red ginseng marc were washed and steamed separately for 40 min. Prior to inoculation with A. oryzae, the cooked brown rice was added with rice bran (20%, w/w) or red ginseng (30%, w/w). All fermented paste samples were freeze-dried at −70 °C prior to use. Their proximate compositions are presented in Table 1.

Forty-eight male C57BL/6N mice (4-week-old), weighing 12 g, were obtained from Orient Inc. (Seoul, Korea). Each mouse was housed in a stainless steel cage in a room maintained at 25 °C with 50% relative humidity and 12/12 h light/dark cycle. Upon arrival, the animals were fed with pelletized chow diet for 2 weeks. They were then randomly divided into 6 dietary groups (n = 8). The first and second groups were fed with normal control (NC group) and high fat (20%, w/w, HF group) diets, respectively. The other 4 groups were fed with a high fat diet supplemented with soybean fermented paste (HF + SB group), brown rice fermented paste (HF + BR group), brown rice-rice bran fermented paste (HF + BRB group), or brown rice-red ginseng marc fermented paste (HF + BRG group). The composition of the experimental diet (Table 2) was based on the AIN-76 semisynthetic diet [18]. The diets for all animal groups, except for the NC group, were added with 17% (w/w) lard to make the diet high fat. The mice were fed for eight weeks and allowed free access to food and water. The feed intake and weight gain were measured daily and weekly, respectively. At the end of the experimental period, the mice were anaesthetized with ketamine-HCl following a 12-h fast. The blood samples were drawn from the inferior vena cava into a heparin-coated tube and centrifuged at 1000× g for 15 min at 4 °C to obtain the plasma and erythrocyte. The plasma and buffy coat were removed after centrifugation and the erythrocytes were washed with physiological saline, followed by hemolysis with distilled water [19]. The concentration of hemoglobin was determined using a commercial assay kit (Asan Pharmaceutical, Seoul, Korea). The liver and adipose tissues (epididymal, perirenal, and inguinal) were removed, rinsed with physiological saline, weighed, and stored at −70 °C until analysis. The current study protocol was approved by the Ethics Committee of Kyungpook National University for animal studies.

The concentration of glycogen was determined according to the method described by Seifter et al. [20]. A 100 mg of fresh liver was mixed with 30% KOH and heated at 100 °C for 30 min. The mixture was added with 1.5 mL ethanol (95%) and kept overnight at 4 °C. The pellet was then mixed with 4 mL distilled water. The mixture (500 µL) was added with 0.2% anthrone (in 95% H2SO4) and its absorbance was measured at 620 nm. The results were calculated on the basis of a standard calibration curve of glucose. The insulin concentration was measured using enzyme-linked immunosorbent assay (ELISA) kits (TMB Mouse Insulin ELISA kit, Sibayagi, Japan).

The plasma and erythrocyte thiobarbituric acid reactive substances (TBARS) were measured using the method of Ohkawa et al. [21]. A 50 µL of the plasma and red blood cell preparation was added with trichloroacetic acid (5%, v/v) and 0.06 M thiobarbituric and incubated at 80 °C for 90 min. The mixtures were cooled at room temperature and centrifuged at 2000 rpm for 25 min. The absorbance of the resulting supernatant was determined at 535 nm. A malondialdehyde (MDA) solution was used as standard and the results were calculated and expressed as nmol MDA/mL plasma or g Hb.

All data are presented as the mean ± S.E. The data was evaluated by one-way ANOVA using a Statistical Package for Social Sciences software program (SPSS Inc., Chicago, IL, USA) and the differences between the means were assessed using Tukey’s test. Statistical significance was considered at p < 0.05.

At the end of the experimental period, the high fat-fed mice exhibited markedly higher body weight gain than the control-fed group (Table 3). However, addition of fermented paste in the diet significantly inhibited this high fat-induced body weight gain. The SB and BRG fermented paste, in particular, were able to reduce the weight gain to normal level despite the significant increase in the feed intakes of HF + SB and HF + BRG groups relative to that of the HF mice. The weight of adipose tissues was also substantially higher in HF mice than that of the NC group. On the other hand, all fermented paste-fed groups showed considerably lower adipose tissue weight than the HF mice, with the HF + BRG group having the lowest amount of body fat.

The concentration of blood glucose was similar among the animal groups during the second and third weeks of the feeding period (Figure 1). However, on the sixth week, the HF group showed significantly higher glucose level than the other groups. At the end of the experimental period, the HF group exhibited the highest glucose level, followed by the HF + BR group. The addition of SB and BRG fermented pastes in the high fat diet decreased the glucose concentration to normal level. 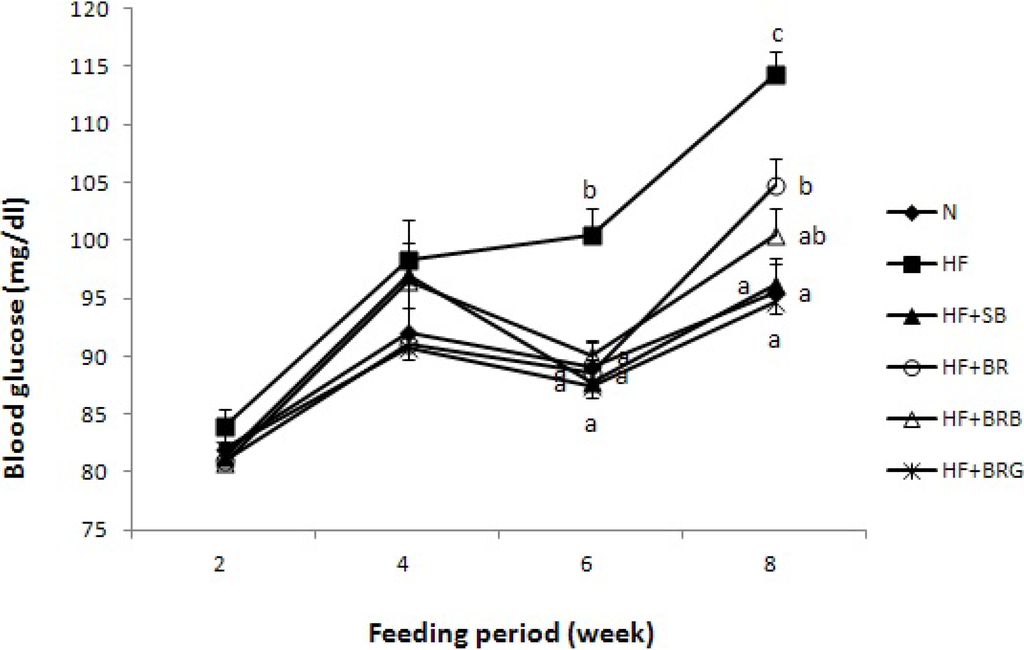 Significantly higher activity of GK enzyme was found in HF+BRG groups than those of the other groups (Table 5). The G6pase and PEPCK activities significantly increased in HF mice relative to the control group, but fermented paste supplementation decreased the G6pase activity. Moreover, the PEPCK activity was markedly lower in HF + SB and HF + BRG groups compared to that of the HF group.

The analysis of TBARS concentration has been widely used to determine the lipid peroxidation and oxidative stress in laboratory animals. In the present study, the levels of plasma and erythrocyte TBARS markedly decreased in fermented paste-fed groups relative to that of the HF group (Table 6). The lowest TBARS concentrations were observed in HF + SB and HF + BRG groups.

High fat feeding resulted in a significant reduction in the activities of SOD, GR, and PON enzymes (Table 7). However, diet supplementation of fermented paste counteracted the decline in the enzyme activities. Although the GSH-Px and CAT activities were not significantly affected by high fat feeding, they considerably increased with the addition of fermented pastes in the high fat diet.

The results demonstrate that dietary feeding of fermented paste significantly improved the glucose metabolism and suppressed the oxidative stress in mice under high fat diet condition through a mechanism involving the regulation of the glucose-regulating enzyme activities and activation of the antioxidant enzymes. In general, while the BR and BRB fermented pastes exhibited glucose-lowering action and antioxidative effect, the inclusion of red ginseng marc in brown rice fermented paste markedly enhanced its hypoglycemic activity and antioxidative property that were comparable to that of soybean fermented paste. Brown rice, in combination with red ginseng marc, may be beneficial as a biomaterial in the development of fermented paste with preventive effect against high fat-induced hyperglycemia and oxidative stress.

This work was carried out with the support of Cooperative Research Program for Agriculture Science and Technology Development (Project No. PJ00817601), Rural Development Administration, Republic of Korea.