Metformin Lowers Serum Cobalamin without Changing Other Markers of Cobalamin Status: A Study on Women with Polycystic Ovary Syndrome
Next Article in Special Issue

The Reduced Folate Carrier (RFC-1) 80A>G Polymorphism and Maternal Risk of Having a Child with Down Syndrome: A Meta-Analysis
Previous Article in Journal

Background: Previous mathematical models for hepatic and tissue one-carbon metabolism have been combined and extended to include a blood plasma compartment. We use this model to study how the concentrations of metabolites that can be measured in the plasma are related to their respective intracellular concentrations. Methods: The model consists of a set of ordinary differential equations, one for each metabolite in each compartment, and kinetic equations for metabolism and for transport between compartments. The model was validated by comparison to a variety of experimental data such as the methionine load test and variation in folate intake. We further extended this model by introducing random and systematic variation in enzyme activity. Outcomes and Conclusions: A database of 10,000 virtual individuals was generated, each with a quantitatively different one-carbon metabolism. Our population has distributions of folate and homocysteine in the plasma and tissues that are similar to those found in the NHANES data. The model reproduces many other sets of clinical data. We show that tissue and plasma folate is highly correlated, but liver and plasma folate much less so. Oxidative stress increases the plasma S-adenosylmethionine/S-adenosylhomocysteine (SAM/SAH) ratio. We show that many relationships among variables are nonlinear and in many cases we provide explanations. Sampling of subpopulations produces dramatically different apparent associations among variables. The model can be used to simulate populations with polymorphisms in genes for folate metabolism and variations in dietary input. View Full-Text
Keywords: folate cycle; methionine cycle; mathematical model; population model; NHANES folate cycle; methionine cycle; mathematical model; population model; NHANES
►▼ Show Figures 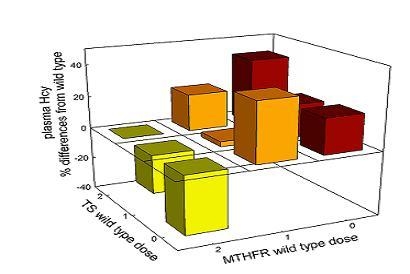