Vitamin E isoforms are essential nutrients that are widely used as dietary supplements and therapeutic agents for a variety of diseases. However, their pharmacokinetic (PK) properties remain poorly characterized, and high dosage animal studies may provide further information on their in vivo functions and pharmacological effects. In this study, alpha-tocopherol (α-toc) and delta-tocopherol (δ-toc) levels were measured in mouse plasma and tissues following their high dosage dietary supplementation. Average α-toc levels at 5, 10 and 20 g α-toc/kg diet increased over baseline levels 6-fold in plasma, 1.6-fold in brain, and 4.9-fold in liver. These elevated α-toc concentrations remained constant from 5 to 20 g α-toc/kg diet, rather than showing further increases across these dosages. No α-toc-related toxicity occurred at these high dosages, and strain-specific differences in liver and brain α-toc levels between Balb/cJ and C57Bl/6J mice were observed. Relatively high-dosage administration of dietary δ-toc for 1 or 4 weeks resulted in 6–30-fold increases in plasma and liver levels between dosages of 0.33 and 1.67 g δ-toc/kg diet. Co-administration of sesamin with δ-toc further increased δ-toc levels between 1.3- and 14-fold in plasma, liver, and brain. These results provide valuable PK information on high dosage α-toc and δ-toc in mouse and show that supplementation of sesamin with δ-toc further increases δ-toc levels over those seen with δ-toc supplementation alone. View Full-Text
Keywords: vitamin E; α-tocopherol; δ-tocopherol; sesamin; pharmacokinetics vitamin E; α-tocopherol; δ-tocopherol; sesamin; pharmacokinetics
►▼ Show Figures 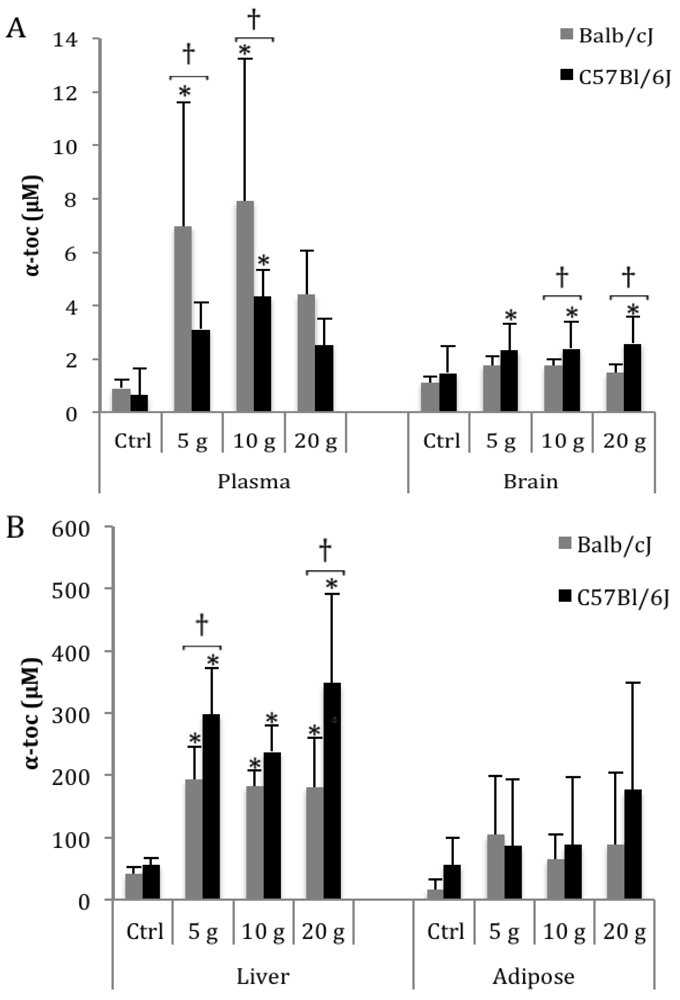