Female infertility is commonly due to ovulation disorders. They are mostly related to polycystic ovary syndrome, which is currently viewed as one of the most common endocrine disorders in women of reproductive age. Ovulation-related female fertility is influenced by multiple factors which may include: age, smoking cigarettes, stress, use of psychoactive substances, and physical activity. Moreover, diet-related factors play an important role in the regulation of ovulation. Dietary components that exert a positive influence on ovulation include: carbohydrate products with low glycemic index, plant protein, monounsaturated and polyunsaturated fatty acids, folic acid, vitamin D, antioxidants, and iron. A diet based on the structure of the Mediterranean diet also seems beneficial. Components that have a negative influence mostly include high glycemic index carbohydrates, large amounts of animal protein, saturated fatty acids, and trans fatty acids, which are typically found in the Western model of nutrition. Due to the paucity of studies that presented a direct link between nutrition and the risk of anovulatory infertility, this study aimed to summarize the most recent research on the influence of dietary factors on ovulation disorders and indicate the possibilities of future research. View Full-Text
Keywords: female fertility; ovulation disorders; diet; nutrition; insulin sensitivity female fertility; ovulation disorders; diet; nutrition; insulin sensitivity
►▼ Show Figures 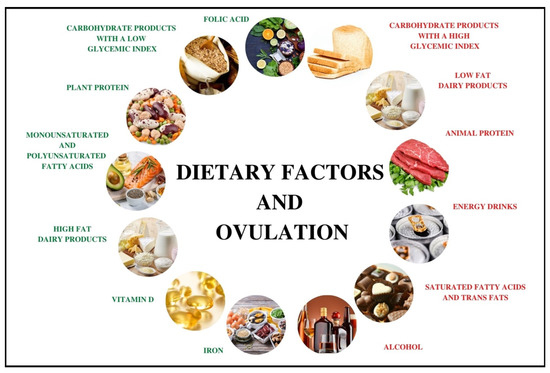