Living with Overweight, Rather than a History of Gestational Diabetes, Influences Dietary Quality and Physical Activity during Pregnancy
Previous Article in Journal

Lactulose, a galactose-fructose disaccharide, is made from the milk sugar lactose by heating or isomerization processes. Lactulose is proposed to modulate gut microbiota and thus expected to be beneficial in treating inflammatory bowel disease. In the present study, we investigated the therapeutic effect of lactulose on gastrointestinal inflammation and inflammation-related tumorigenesis in a mouse model of colorectal cancer as well as its effect on gut microbiota composition. Azoxymethane (AOM)/dextran sulfate sodium (DSS) model was used in this study. Lactulose treatment was performed by feeding 2% lactulose for 14 weeks. Stool samples collected at 4 time points were used for metagenomic analysis of the microbiota. Pathological analysis was performed 21 weeks after AOM injection. AOM/DSS increased the macrophage counts, inflammatory cytokine expression, colorectal tumorigenesis, and imbalance in gut microbiota composition, as evidenced by increased pathogen abundance (e.g., Escherichia and Clostridium). Lactulose significantly inhibited the inflammatory events, and ameliorated inflammation and tumorigenesis. The composition of the intestinal microbiota was also restored upon lactulose treatment, and lactulose reduced pathogen abundance and increased the abundance of Muribaculum and Lachnospiraceae. Meanwhile, the pathways related to Crohn’s disease were downregulated after lactulose treatment. Our findings suggest that lactulose restores the structure and composition of the intestinal microbiota, mitigates inflammation, and suppresses inflammatory tumorigenesis. View Full-Text
Keywords: inflammatory bowel disease; colorectal cancer; lactulose; gut microbiota inflammatory bowel disease; colorectal cancer; lactulose; gut microbiota
►▼ Show Figures 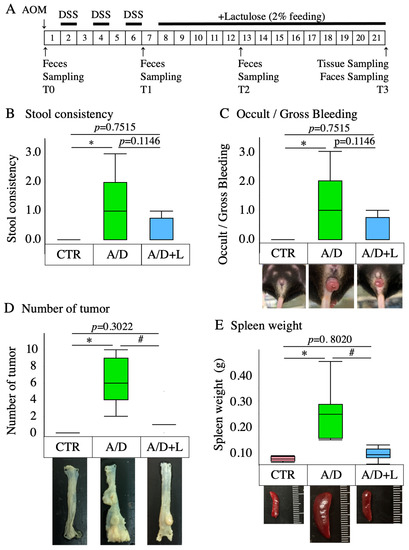