Care Their Diet and Mind: Association between Eating Habits and Mental Health in Chinese Left-behind Children
Next Article in Special Issue

Influence of Healthy Habits Counseling on Biochemical and Metabolic Parameters in Children and Adolescents with HIV: Longitudinal Study

Pharmacokinetic Outcomes of the Interactions of Antiretroviral Agents with Food and Supplements: A Systematic Review and Meta-Analysis

Because pharmacokinetic changes in antiretroviral drugs (ARV), due to their concurrent administration with food or nutritional products, have become a clinical challenge, it is necessary to monitor the therapeutic efficacy of ARV in people living with the human immunodeficiency virus (PLWH). A systematic review and meta-analysis were conducted to clarify the pharmacokinetic outcomes of the interaction between supplements such as food, dietary supplements, and nutrients, and ARV. Twenty-four articles in both healthy subjects and PLWH were included in the qualitative analysis, of which five studies were included in the meta-analysis. Food–drug coadministration significantly increased the time to reach maximum concentration (tmax) (p < 0.00001) of ARV including abacavir, amprenavir, darunavir, emtricitabine, lamivudine, zidovudine, ritonavir, and tenofovir alafenamide. In addition, the increased maximum plasma concentration (Cmax) of ARV, such as darunavir, under fed conditions was observed. Area under the curve and terminal half-life were not significantly affected. Evaluating the pharmacokinetic aspects, it is vital to clinically investigate ARV and particular supplement interaction in PLWH. Educating patients about any potential interactions would be one of the effective recommendations during this HIV epidemic. View Full-Text
Keywords: food–drug interactions; nutrients; pharmacokinetics; HIV; AIDS food–drug interactions; nutrients; pharmacokinetics; HIV; AIDS
►▼ Show Figures 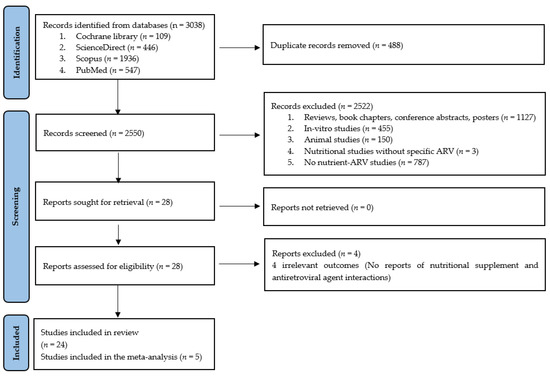 
Siritientong, Tippawan, Daylia Thet, Janthima Methaneethorn, and Nattawut Leelakanok. 2022. "Pharmacokinetic Outcomes of the Interactions of Antiretroviral Agents with Food and Supplements: A Systematic Review and Meta-Analysis" Nutrients 14, no. 3: 520. https://doi.org/10.3390/nu14030520