Nutrition Coverage in Medical Licensing Examinations in Germany: An Analysis of Six Nationwide Exams
Next Article in Special Issue

Unhealthy Lifestyles and Retinal Vessel Calibers among Children and Adolescents: A Systematic Review and Meta-Analysis
Previous Article in Journal

Effect of Oral Iron Supplementation on Cognitive Function among Children and Adolescents in Low- and Middle-Income Countries: A Systematic Review and Meta-Analysis

2.1. The Study Protocol and Search Strategy

This study protocol followed the Cochrane Handbook for Systematic Reviews and Meta-Analysis Protocol (Cochrane Handbook for Systematic Reviews and Meta-Analysis Protocol) (PRISMA-P) [23], and was registered with the International Prospective Register of Systematic Reviews (PROSPERO identifier: CRD42020179064).
Under the direction of a professional librarian, the literature search for this study was performed in PubMed, Embase, Web of Science, and CINAHL. All studies were published before May 1, 2022. The search included relevant medical subject heading terms, keywords, and word variants for children, adolescents, iron supplementation, and LMICs (see Supplementary Text S1 for full search strategies and results). The list of references to related reviews and articles was also checked. Moreover, we contacted the authors of articles via email when the required information to determine eligibility was not reported in the articles to ensure that all necessary data were obtained.

Studies for this meta-analysis were selected based on the following a-priori-defined inclusion criteria:

(1)
Randomized controlled trials (RCTs);
(2)
Children and adolescents within the age range of 5–19 years;
(3)
From LMICs classified by the World Bank according to the year of the study;
(4)
Oral iron supplementation where iron was the only micronutrient provided;
(5)
The control group could be a placebo or no intervention.

(1)
Interventional studies without appropriate control groups;
(2)
Observational studies;
(3)
Editorials, reviews, opinions, or review articles were ineligible; however, these articles were reviewed to determine eligible research;
(4)
Participants with pregnancy or HIV/AIDS, or lactating.

If study samples overlap in at least two publications or if multiple publications describe the same study aspects, then only the publication with the largest sample was considered.

Data were extracted using a standardized spreadsheet independently by two reviewers (Yiqian Xin and Jiawen Carmen Chen) on a prespecified form. A third author (Zekun Chen) was consulted when discrepancies occurred. All literature meeting inclusion criteria were carefully read. Standard data extraction tables were used to extract specific information from each study, including the first author, publication date, research location, age at intervention, dose of iron supplementation, intake duration, and the number of people in the intervention group and control group. Additionally, mean and standard deviation (SD) or standard error (SE) were extracted from each study included.

Forest plots were generated for pooled analysis, and a standardized mean difference (SMD) was reported in the analysis. The heterogeneity among results was analyzed by the Q test. If the Q test obeyed the chi-square distribution and p >0.1, then it was judged to have no heterogeneity. I2 statistic, which can be used to quantitatively represent the between-study heterogeneity, was calculated in this study. A fixed-effect model was adopted if I2 < 50%; otherwise, the random-effects model was performed. Subgroup analyses on intelligence by sex, age, dose of iron exposure, supplementation duration of iron, and baseline anemia status of the study participants were conducted according to the different characteristics of the studies (the number of studies for other outcomes was not sufficient for subgroup analysis). In each outcome, sensitivity analysis was employed to investigate the influence of a single trial on the overall effect as estimated by omitting one study in each turn. Publication bias was assessed with Egger’s linear regression test [25]. Where the SD was unavailable but the SE was available, the SD was calculated from the SE (SD = SE × ). (Supplementary Text S2). All statistical analyses were performed with Review Manager 5.4 (Review Manager 2020) and STATA (version 17; Stata Corp., College Station, TX, USA). p < 0.05 was considered statistically significant.

Figure 1 displays the flowchart of this study. Specifically, the search strategy identified a total of 4594 articles after removing duplicates, of which 4574 were excluded based on the contents of the title and abstract. After this, we retrieved 20 full-text papers for further consideration. Among them, four records were excluded for not providing sufficiently extractable data; three were excluded because they were not supplementation with iron alone; and four were excluded for not being oral supplementation. Ultimately, nine RCTs fulfilled the eligibility criteria and were included in the meta-analysis [20,26,27,28,29,30,31,32].

3.2. Basic Features Included in The Study

Table 1 presents a summary of the characteristic of 1196 participants across the included studies. All the studies were RCTs conducted in LMICs and published in 1988 and beyond, with the latest published in 2014 [20,26,27,29,30,31]. Among these studies, eight were carried out in Asia (four in India, one in Indonesia, one in Iran, and two in Thailand) and one in Africa (South Africa). The age of children and adolescents at the time of intervention was 6–18 years old. The median intervention duration was 4.9 months (varied from 3 months to 8.5 months). Some of the trials had two arms providing different doses of the supplement regimen. In these cases, we combined the study arms for the overall comparison and included the disaggregated information in the subgroup analyses (Supplementary Text S3).

Each included study was assessed according to the RoB, and Supplementary Figure S3 presents the RoB graph and the RoB summary. Overall, five of the studies were categorized as having a low risk of bias, two as having an unclear risk, and two as having a high risk of bias. Additionally, there was no evidence of a significant publication bias in this study, confirmed by the Egger’s test (Intelligence test score: p = 0.737; short-term memory: p = 0.231; school performance: p = 0.051). In the leave-one-out sensitivity analyses, the impact of each trial was discussed, testing whether deleting each trial sequentially would significantly change the pooled results of the meta-analysis (available in Supplementary Figure S2). Sensitivity analyses of each individually deleted study showed that none of the studies alone significantly changed the pooled results of our outcomes except attention (see Supplementary Figure S2 for details).

Our results suggest that oral iron intake can improve the cognitive development of children and adolescents living in LMICs. This study justifies the guideline of the WHO, which recommends non-discriminatory iron supplementation for children and adolescents to prevent iron deficiency and anemia in countries where more than 40% of infants and young children have anemia. Moreover, the public health implications of iron should be evaluated in a more comprehensive manner when it comes to iron interventions. Long-term prospective observational studies are needed to evaluate the effects of iron on long-term intellectual development.

This research was funded by the Sanming Project of Medicine in Shenzhen (NO.SZSM202111001). 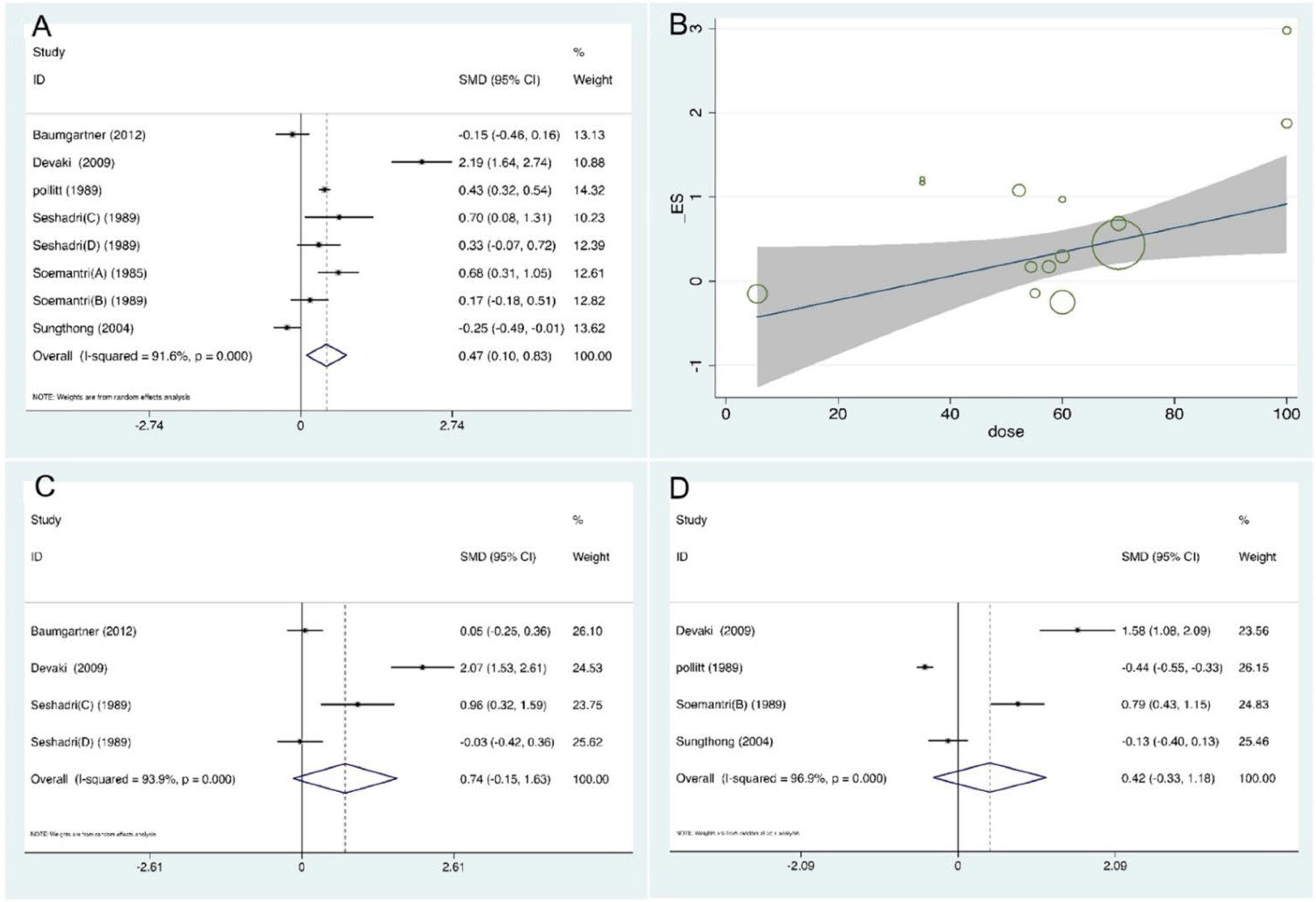