The Effects of Deworming and Multiple Micronutrients on Anaemia in Preschool Children in Bangladesh: Analysis of Five Cross-Sectional Surveys
Previous Article in Journal

Microbiota and Metabolite Profiling as Markers of Mood Disorders: A Cross-Sectional Study in Obese Patients
Previous Article in Special Issue

The aim of this study was to investigate the possible beneficial effects of exercise training (ET) with omega-3/Calanus oil supplementation on cardiorespiratory and adiposity parameters in elderly women. Fifty-five women (BMI: 19–37 kg/m2, 62–80 years old) were recruited and randomly assigned to the 4 month intervention with ET and omega-3 supplementation (Calanus oil, ET-Calanus) or ET and the placebo (sunflower oil; ET-Placebo). The body composition was determined by dual-energy X-ray absorptiometry (DXA), and cardiorespiratory parameters were measured using spiroergometry and PhysioFlow hemodynamic testing. Both interventions resulted in an increased lean mass whereas the fat mass was reduced in the leg and trunk as well as the android and gynoid regions. The content of trunk fat (in percent of the total fat) was lower and the content of the leg fat was higher in the ET-Calanus group compared with the ET-Placebo. Although both interventions resulted in similar improvements in cardiorespiratory fitness (VO2max), it was explained by an increased peripheral oxygen extraction (a-vO2diff) alone in the ET-Placebo group whereas increased values of both a-vO2diff and maximal cardiac output (COmax) were observed in the ET-Calanus group. Changes in COmax were associated with changes in systemic vascular resistance, circulating free fatty acids, and the omega-3 index. In conclusion, Calanus oil supplementation during a 4 month ET intervention in elderly women improved the cardiorespiratory function, which was due to combined central and peripheral cardiodynamic mechanisms. View Full-Text
Keywords: aging; omega-3 fatty acids; cardiorespiratory fitness; cardiac output; body composition aging; omega-3 fatty acids; cardiorespiratory fitness; cardiac output; body composition
►▼ Show Figures 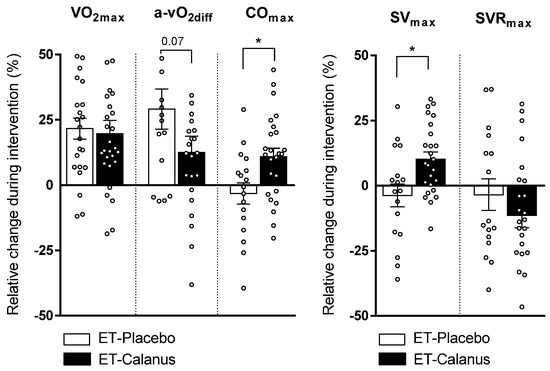