Chronic Kidney Disease: Role of Diet for a Reduction in the Severity of the Disease
Next Article in Special Issue

Conservation of the energy equilibrium can be considered a dynamic process and variations of one component (energy intake or energy expenditure) cause biological and/or behavioral compensatory changes in the other part of the system. The interplay between energy demand and caloric intake appears designed to guarantee an adequate food supply in variable life contexts. The circadian rhythm plays a major role in systemic homeostasis by acting as “timekeeper” of the human body, under the control of central and peripheral clocks that regulate many physiological functions such as sleep, hunger and body temperature. Clock-associated biological processes anticipate the daily demands imposed by the environment, being synchronized under ideal physiologic conditions. Factors that interfere with the expected demand, including daily distribution of macronutrients, physical activity and light exposure, may disrupt the physiologic harmony between predicted and actual behavior. Such a desynchronization may favor the development of a wide range of disease-related processes, including obesity and its comorbidities. Evidence has been provided that the main components of 24-h EE may be affected by disruption of the circadian rhythm. The sleep pattern, meal timing and meal composition could mediate these effects. An increased understanding of the crosstalk between disruption of the circadian rhythm and energy balance may shed light on the pathophysiologic mechanisms underlying weight gain, which may eventually lead to design effective strategies to fight the obesity pandemic.
Keywords: energy expenditure; food intake; thermic effect of food; chronodisruption energy expenditure; food intake; thermic effect of food; chronodisruption

Obesity is a growing public health problem and an ever-increasing global pandemic with individual and general consequences. In 2016, the World Health Organization estimated that 39% of the world population were individuals who were overweight and 13% with obesity [1]. It has been predicted that the prevalence of individuals with obesity will approach 50% of the worldwide population by 2030 [2]. The dysregulation of the two components of the energy balance equation, energy intake (EI) and energy expenditure (EE) leads to weight gain and, thus, to the development of human obesity. Whereas the solution to the obesity “problem” appears as easy as increasing energy expenditure and reducing energy intake, failure of attempts to change individual lifestyle within an obesogenic environment indicates that understanding the complex interactions between genetics, physiology, environmental and social behavior are essential in the control of human energy balance. A major challenge in obesity research is the accurate measurement of energy intake and energy expenditure, to identify and explore causal associations between various components of energy homeostasis, and to accurately define how energy balance is altered in response to different interventions.
In the past years, scientists focused on the emerging role of circadian rhythm in the regulation of energy metabolism. Circadian rhythms are essential in humans to coordinate physiologic functions which are generally tied to the dark/light cycle such as sleep-wake periods, feeding behavior, hormone secretion and metabolism [3]. Evidence for a pathogenic role of disruption of the circadian rhythm exists in several conditions including obesity, diabetes mellitus and psychiatric disorders [4,5]. Recently, it has been shown that eating timing may be more important than macronutrient composition of diet in controlling changes in body weight [6,7].
This review will focus on the effects of circadian rhythm disruption on the regulation of energy balance components (food intake and energy expenditure). It is a narrative review not set to systematically include the entire body of published literature but only the pivotal studies that may provide a broad perspective on the topic.

2. The Regulation of Energy Balance: From a Static to a Dynamic Perspective

Emerging evidence suggests that higher caloric intake in the morning than later during the day is associated with reduced susceptibility to weight gain, although further controlled intervention trials are needed to provide definitive conclusions. TEF might play a role in the regulation of body weight based on the circadian rhythm. Daytime-loaded energy intake seems to be associated with higher TEE and TEF compared to later hours. Thus, a late daily energy load might favor a positive energy balance which, in turn, would promote weight gain. The study of circadian rhythm and/or specific meal and sleep timing patterns might play a role in identifying subjects more resistant or more prone to gaining weight. The alignment of meal and sleep timing to the normal circadian rhythm might become an important strategy aimed at controlling body weight and sustaining weight loss following any type of dietary intervention.

A.B. was funded by the Italian Ministry of the University, Project code 2017L8Z2EM: Mechanisms of adipose tissue dysfunction in obesity: a target of future weight loss strategies for the prevention of diabetes and cardiovascular diseases. 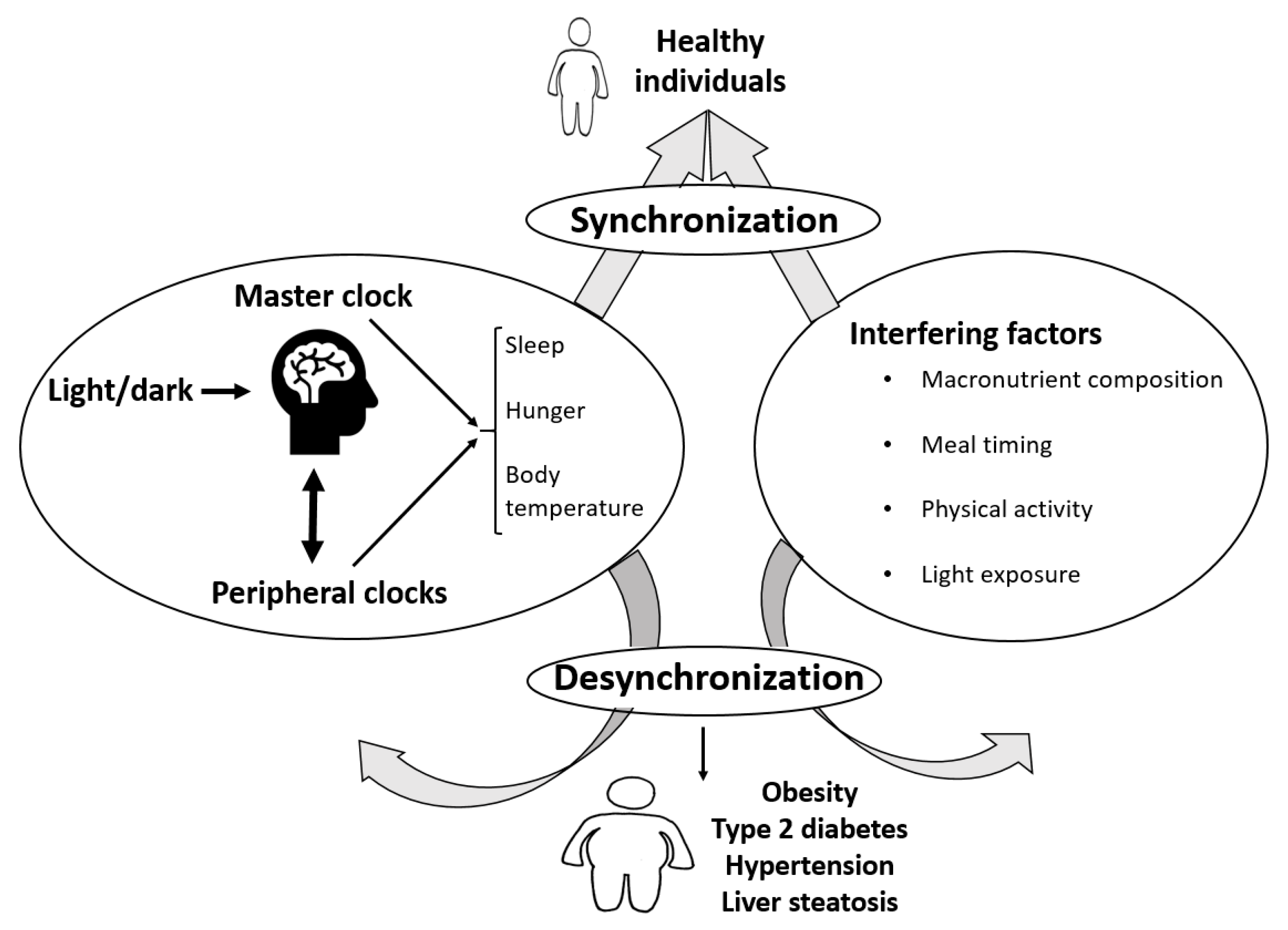