Diet, Probiotics and Their Impact on the Gut Microbiota during the COVID-19 Pandemic

A Randomised, Controlled Trial: Effect of a Multi-Strain Fermented Milk on the Gut Microbiota Recovery after Helicobacter pylori Therapy

Helicobacter pylori (Hp) eradication therapy alters gut microbiota, provoking gastrointestinal (GI) symptoms that could be improved by probiotics. The study aim was to assess the effect in Hp patients of a Test fermented milk containing yogurt and Lacticaseibacillus (L. paracasei CNCM I-1518 and I-3689, L. rhamnosus CNCM I-3690) strains on antibiotic associated diarrhea (AAD) (primary aim), GI-symptoms, gut microbiota, and metabolites. A randomised, double-blind, controlled trial was performed on 136 adults under 14-day Hp treatment, receiving the Test or Control product for 28 days. AAD and GI-symptoms were reported and feces analysed for relative and quantitative gut microbiome composition, short chain fatty acids (SCFA), and calprotectin concentrations, and viability of ingested strains. No effect of Test product was observed on AAD or GI-symptoms. Hp treatment induced a significant alteration in bacterial and fungal composition, a decrease of bacterial count and alpha-diversity, an increase of Candida and calprotectin, and a decrease of SCFA concentrations. Following Hp treatment, in the Test as compared to Control group, intra-subject beta-diversity distance from baseline was lower (padj = 0.02), some Enterobacteriaceae, including Escherichia-Shigella (padj = 0.0082) and Klebsiella (padj = 0.013), were less abundant, and concentrations of major SCFA (p = 0.035) and valerate (p = 0.045) were higher. Viable Lacticaseibacillus strains were detected during product consumption in feces. Results suggest that, in patients under Hp treatment, the consumption of a multi-strain fermented milk can induce a modest but significant faster recovery of the microbiota composition (beta-diversity) and of SCFA production and limit the increase of potentially pathogenic bacteria. View Full-Text
Keywords: antibiotics; Helicobacter pylori; antibiotic associated diarrhea; gut microbiota; short chain fatty acids; recovery antibiotics; Helicobacter pylori; antibiotic associated diarrhea; gut microbiota; short chain fatty acids; recovery
►▼ Show Figures 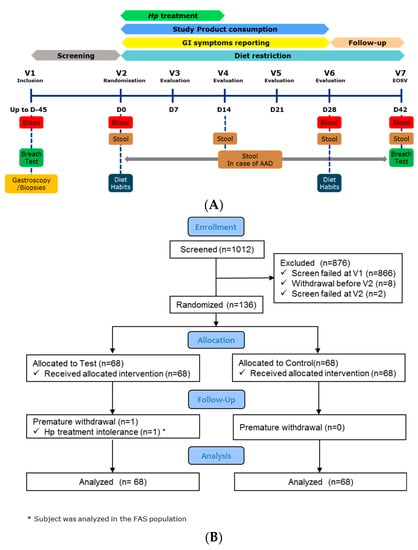