The aims of this study were to evaluate: (1) associations of vitamin D with the presence/severity of Hashimoto’s thyroiditis (HT) and (2) correlations of vitamin D with thyroid-related phenotypes. Total 25(OH)D (vitamin D in the text) was measured from stored serum samples of 461 HT patients and 176 controls from a Croatian Biobank of HT patients (CROHT). (1) Vitamin D levels, and proportions of vitamin D deficiency, were compared between HT cases and controls. HT patients were additionally divided into two groups (MILD and OVERT) to take into account HT severity. (2) Correlations between vitamin D and 10 clinical phenotypes in all HT patients and two subgroups of HT patients were tested using the Spearman correlation test. Our analyses were adjusted for age, gender, BMI, smoking status and seasonality of blood sampling. (1) No significant differences in vitamin D levels, or proportions of vitamin D deficiency, were detected between HT patients of all disease stages and controls. However, a nominally significant difference in vitamin D levels between MILD and OVERT subgroups (OR = 1.038, p = 0.023) was observed. Proportions of individuals with vitamin D deficiency during winter–spring were high: all HT cases (64.69%), MILD (60.64%), OVERT (68.7%), controls (60.79%). (2) A nominally significant negative correlation between vitamin D and TSH in all HT patients (r = −0.113, p = 0.029) and a positive correlation between vitamin D and systolic blood pressure in OVERT HT patients (r = 0.205, p = 0.025) were identified. Our study indicates that there is no association between vitamin D and HT; however, there may be a subtle decrease in vitamin D levels associated with overt hypothyroidism.
Keywords: vitamin D; Hashimoto’s thyroiditis; thyroid autoimmunity; thyroid stimulating hormone (TSH); thyrotropin vitamin D; Hashimoto’s thyroiditis; thyroid autoimmunity; thyroid stimulating hormone (TSH); thyrotropin

In conclusion, we have not found an association between vitamin D levels and HT patients of all disease stages; however, results of our study indicate that there may be a subtle decrease in vitamin D levels associated with disease severity. We also observed high proportions of vitamin D deficiency in all study participants, alerting of necessity for outdoor activities for health purposes and/or the need for intake of vitamin D supplementation, especially for HT patients with a more severe form of disease. Our study shows that there is a need for a more detailed categorization of patients according to disease severity when performing scientific research.

The formation of the CROHT biobank was supported by the Croatian Science Foundation under the project “Genome-wide association analysis of Hashimoto’s thyroiditis” (grant no. 4950).

All study participants were informed about planned research activities through the Information leaflet and they all signed an Agreement for participation prior to inclusion in the study.

The data that support the findings of this study are available on reasonable request from the corresponding author.

There is no conflict of interest that could be perceived as prejudicing the impartiality of the research reported. 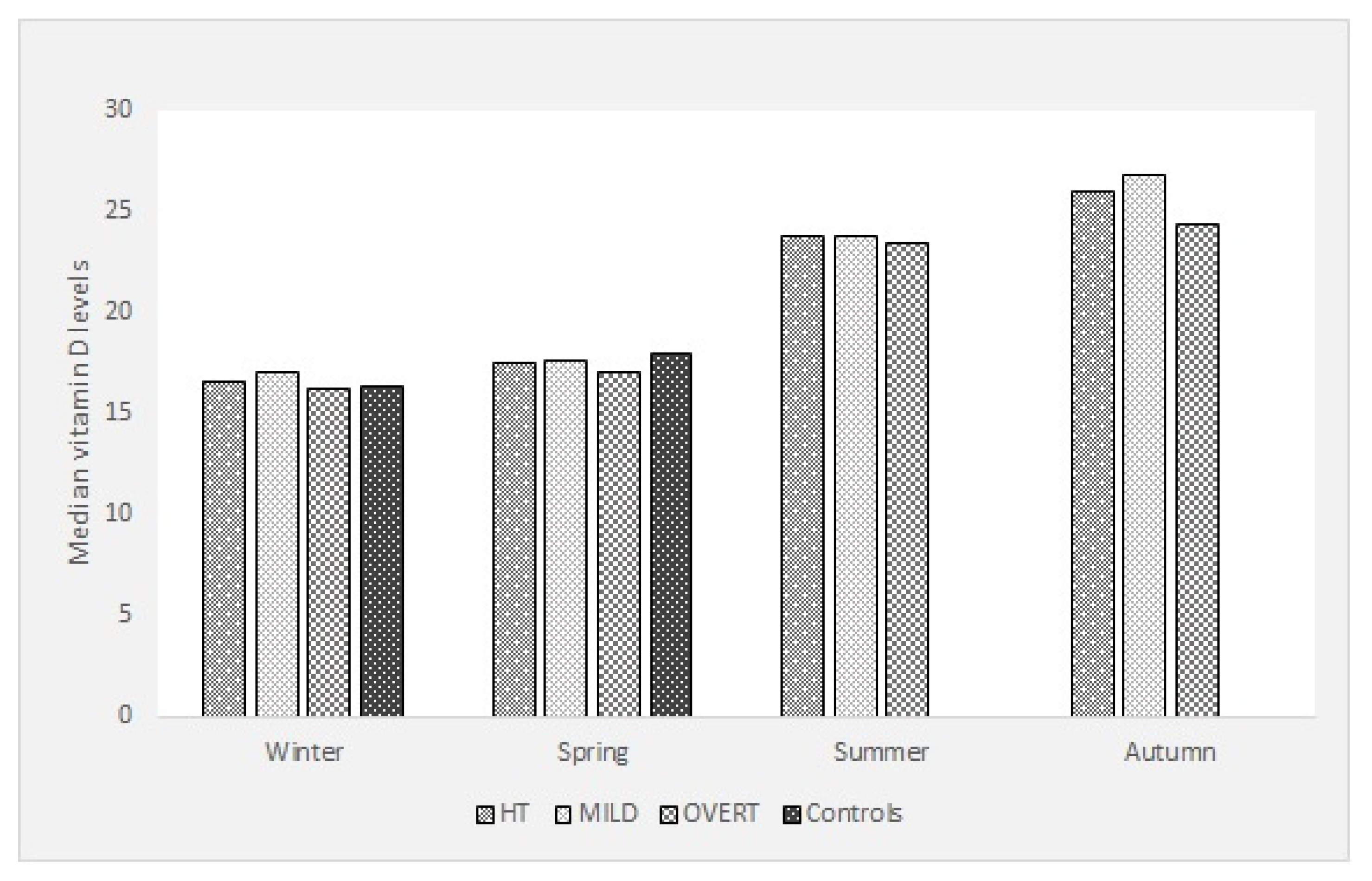