Availability of a Flavored Beverage and Impact on Children’s Hydration Status, Sleep, and Mood

:
Adequate fluid replacement during exercise is an important consideration for athletes, however sweat rate (SR) can vary day-to-day. The purpose of this study was to investigate day-to-day variations in SR while performing self-selected exercise sessions to evaluate error in SR estimations in similar temperature conditions. Thirteen endurance-trained athletes completed training sessions in a case-series design 1x/week for a minimum 30 min of running/biking over 24 weeks. Body mass was recorded pre/post-training and corrected for fluid consumption. Data were split into three Wet-Bulb Globe Thermometer (WBGT) conditions: LOW (<10 °C), MOD (10–19.9 °C), HIGH (>20 °C). No significant differences existed in exercise duration, distance, pace, or WBGT for any group (p > 0.07). Significant differences in SR variability occurred for all groups, with average differences of: LOW = 0.15 L/h; MOD = 0.14 L/h; HIGH = 0.16 L/h (p < 0.05). There were no significant differences in mean SR between LOW-MOD (p > 0.9), but significant differences between LOW-HIGH and MOD-HIGH (p < 0.03). The assessment of SR can provide useful data for determining hydration strategies. The significant differences in SR within each temperature range indicates a single assessment may not accurately represent an individual’s typical SR even in similar environmental conditions.
Keywords:
hypohydration; hyperhydration; hyponatremia; fluid loss; fluid balance

The lean tissue of the human body is composed of approximately 73% water [1]. Variations in body fat will result in individual body water levels ranging from ~50–70% of total body mass. This water is critically important for cardiovascular function and thermoregulation. When the body has adequate fluid intake to match fluid losses individuals are considered to be in a state of euhydration. When fluid intake is in excess of fluid loss individuals can become hyperhydrated and when fluid loss exceeds fluid intake individuals become hypohydrated.
Hypohydration is the term used to describe a state of suboptimal body water. At rest, internal factors that influence the body’s water status are mainly body composition, hormonal activity, and sweating [2]. External factors with the greatest influence on body water levels include fluid intake, medications, medical conditions, physical activity, environmental conditions, and clothing [3]. Many athletes, from youth to professional, initiate training in hypohydrated states [4,5,6], and dehydration through sweat loss with insufficient fluid replacement will exacerbate this hypohydrated condition. As a result of hypohydration there is increased cardiovascular strain [7], thermal strain [8], perceived exertion [9], and reduced oxygen and nutrient delivery to the exercising muscle [8,10,11]. Due to these physiological responses to reductions in body water, exercise performance has been shown to be diminished with as little as 2% hypohydration [12,13,14,15,16,17,18].
Hyperhydration is the term used to describe a state of overhydration. At rest excess fluid consumption typically leads to increased urine output allowing for the maintenance of a euhydrated state. In individuals with compromised kidney function, unnecessary increases in fluid intake above fluid loss can lead to fluid retention [19]. Similarly, exercising individuals can experience fluid retention due to the increased actions of antidiuretic hormone and aldosterone upregulation during exercise [20,21]. Studies have demonstrated hyperhydration does not aid in exercise performance or heat tolerance [22,23,24,25,26]. While hyperhydration does not benefit exercise it can be detrimental to health. Uncompensable fluid intake can lead to dilution of electrolytes, particularly sodium, leading to hyponatremia, and if untreated can result in cerebral or pulmonary edema leading to death [8].
The evaporation of sweat can remove ~580 kcal/L and serves as a valuable tool to dissipate heat produced through metabolic processes [27]. As we exercise or perform physical work, metabolic heat production increases to match the increased work output. Sweat rate also increases in an effort to combat the increases in body temperature associated with increased metabolic rate. Unfortunately, sweat that drips from the body and does not evaporate does not provide a significant source of heat loss. In environments with higher humidity, sweat rates can be elevated significantly without fully corresponding to estimated metabolic heat production due to reductions in evaporative cooling as a result of moisture in the air [28].
There have been numerous studies exploring average sweat rates and the impact of intensity, duration, environmental conditions, and clothing [29,30]. Typical sweat rates are reported between 0.5–2.0 L/h during activity [31], although due to the large number of variables influencing sweat rate there is significant variability in the sweat rates reported across and within sports. It has been previously reported that about 2% of athletes have sweat rates that can exceed 3 L/h with the highest reported sweat rate during exercise is 5.73 L/h [29]. Within the extremes of the sweat rate range, little to no sweat is produced as a result of conditions such as hypohidrosis and anhidrosis, while hyperhidrosis can lead to extremely high sweat rates [32]. Reporting an average sweat rate when such large ranges exist can result in athletes incorrectly using and applying the information as the foundation for their individual hydration needs.
The most frequently used method to assess sweat loss in both laboratory and field settings is through pre- and post-exercise body mass changes during exercise. This technique is recommended as a viable method of assessing exercise sweat rate by the American College of Sports Medicine [31] and National Athletic Trainers Association [8]. Limited research has explored the within-subject variability of sweat rate, with day-to-day variation reported to be 5–7% in well-controlled settings. Due to the ease of measuring changes in body mass pre- and post-exercise this technique is commonly recommended to professional and recreational athletes. While athletes have been exposed to this technique, many athletes use it without the full understanding of the controls in place for laboratory-based studies likely resulting in increases in sweat rate variation on a day-to-day basis. Therefore, the purpose of this study was to determine the variability observed in day-to-day sweat rate within endurance trained individuals carrying out regular training without artificially controlled preparation, environmental, and exercise guidelines.

Individuals training as recreational runners and triathletes along with collegiate cross-country runners were recruited from the local area to explore the variability in sweat rate throughout multiple seasons. Data collection trials began in September and concluded in February as a result of COVID-19 restrictions. Thirteen endurance-trained males (n = 3) and females (n = 10) were included in the present study and were currently running a minimum of 120 min per week for the previous three months. All participants provided written consent prior to participating. This study was approved by the Institutional Review Board at Mississippi State University.

Participants completed training sessions once per week for a minimum duration of 30 min in a case-series design. Sessions included either running or biking at a self-selected pace and intensity between 5:30 and 9:30 am. Duration and distance were measured using the athlete’s GPS watches, pace was then calculated from these values. Environmental conditions were recorded using a Wet-Bulb Globe Thermometer (WBGT; QUESTemp 32, 3M, St. Paul, MN, USA) at exercise initiation and every 15 min during the training. Sweat rates were calculated from the change in body mass measured (Defender 3000, OHAUS, Parsippany, NJ, USA) before and after training, with correction for fluid intake. Immediately prior to the initiation of exercise athletes weighed dry exercise clothes and shoes alone, were asked to void their bladder, and then athlete body mass was collected while wearing dry exercise clothes and shoes. To account for sweat trapped by clothes [33], immediately post-exercise athletes’ body mass was collected while wearing exercise clothes and shoes, athletes then changed to allow sweaty clothes and shoes to be weighed alone.
Sweat rate was calculated by: where, CBW = clothed body weight (kg); CS = exercise clothing and shoes (kg); FB = food/beverage (kg).
Due to the short duration of exercise no adjustments were made to account for respiratory fluid losses.
Data collection took place outdoors in natural environmental conditions over 7 months except during times of precipitation. The natural environmental conditions were separated into three WBGT ranges: LOW (less than 10 °C), MOD (between 10–20 °C) and HIGH (above 20 °C).

All data were analyzed using SPSS v26 statistical software (IBM, Armonk, NY, USA). Participant comparisons were included if a minimum of two sessions were completed for LOW, MOD, or HIGH conditions, and the highest and lowest sweat rates were used for analysis, as well as the mean sweat rates. A Shapiro-Wilks test of normality was conducted, there were no outliers, and the significance was above an alpha level of 0.05, therefore the data is normal and is parametric. Not all participants completed multiple training sessions in each range, therefore independent sample T-tests were used for comparisons between WBGT, duration, distance, and pace for each temperature range. Analysis of variance (ANOVA) tests with Tukey’s Honestly Significant Difference (HSD) pairwise comparisons were used to analyze differences in mean sweat rates between temperatures. The participants who completed multiple training sessions in all three temperature ranges (n = 4) were included for subsequent analysis. A Friedman’s Rank test was performed to test for differences between temperature ranges. Post-hoc analysis with Wilcoxon Signed-Rank test was conducted with a Bonferroni correction applied. Significance was set a priori at p < 0.05.

The study was conducted according to the guidelines of the Declaration of Helsinki and approved by the Institutional Review Board of Mississippi State University (IRB-19-320 approved 7/26/2019).

The data presented in this study are available on request from the corresponding author. The data are not publicly available due to participant privacy and confidentiality.

The authors thank the participants and graduate students that assisted in data collection. 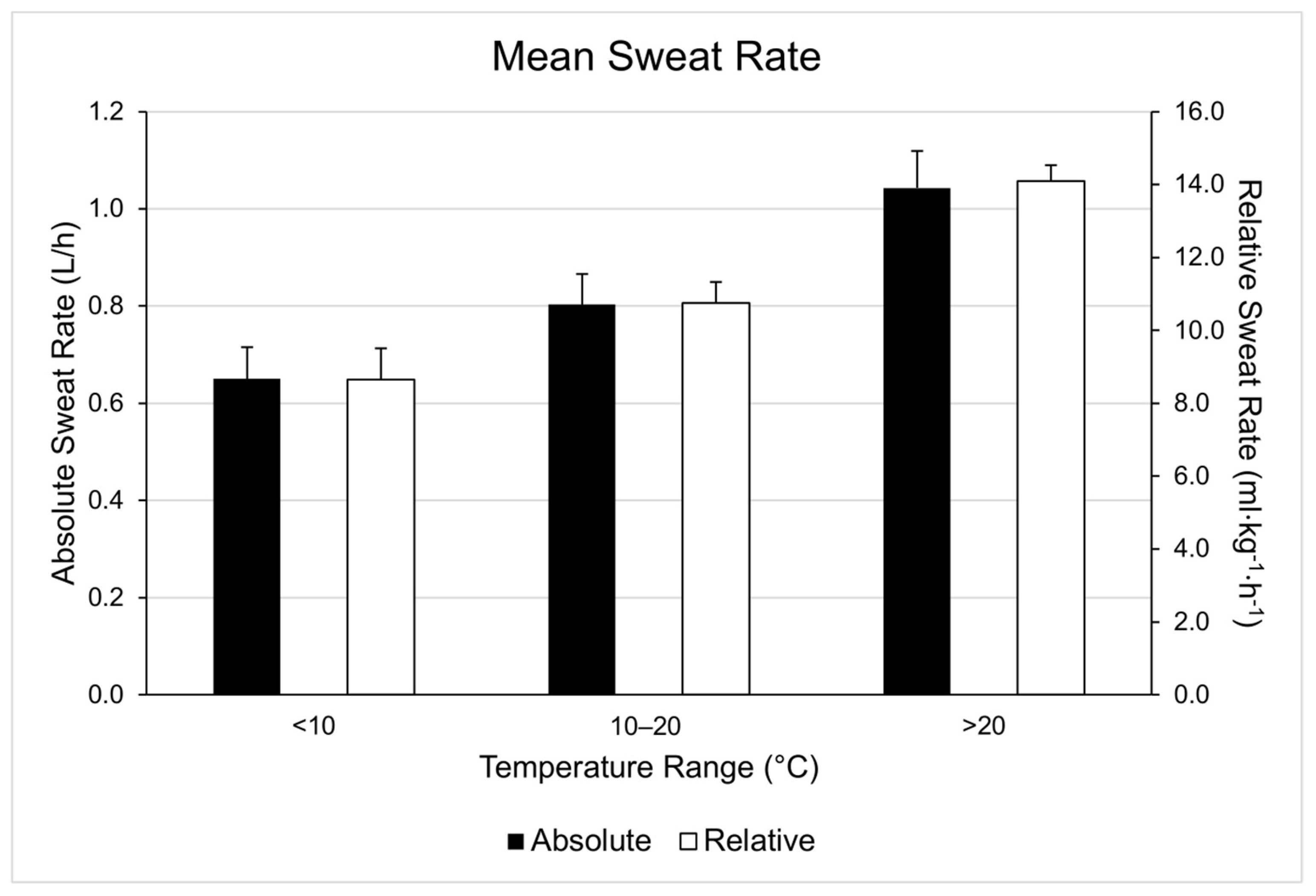