Coffee and Lower Risk of Type 2 Diabetes: Arguments for a Causal Relationship

Caffeine (1,3,7-trimethylxanthine) is a psychoactive substance found in many different sports supplements due to its associated ergogenic effect when ingested 45–90 min before sports practice [1]. Given its performance enhancing effects, this substance is recurrently used by different sports athletes and has been found in 74% of the urine samples analyzed in doping controls [2]. It is accepted that the main mechanism associated with sports performance is produced in the central nervous system (CNS) as an antagonist of the adenosine receptors due to its similar molecular form [1]. However, the mechanism related to caffeine in anaerobic power movements seems inconclusive. It is suggested that its effect in a peak power test could be through tetanic tension [3], however, high and toxic concentrations of caffeine in humans are necessary to produce the aforementioned neuromuscular process [3,4]. One of the increased power events associated with caffeine consumption is countermovement jump (CMJ) height [5,6,7,8,9], which is a useful and sensitive tool to monitor lower limb neuromuscular status [10]. However, only analyzing the main outcomes of the CMJ prevents us from understanding the neuromuscular function along the force-time curve and the different phases of the jump [11]. To give an example of this in-depth analysis, a longitudinal examination identified that training not only influenced the performance of the traditional variables (peak power, peak velocity and jump height), it also modified the shape of the power-, force-, velocity- and displacement-time curves during the different phases of the CMJ [12]. In addition to bilateral CMJ force-time curve or phase analysis, unilateral CMJ assessment is receiving more attention due to the claim that the unilateral jump presents more similarities (one-leg nature) with different sports actions such us running strides and changes of direction [13]. Therefore, a unilateral assessment may offer better training information in order to reproduce competition-specific movement patterns. In this respect, the single-leg vertical jump has been significantly related to 10 m acceleration performance, change of direction times, the single-leg lateral jump and single-leg horizontal jump [14].
Previous research has identified that moderate doses (3–5 mg/kg) of caffeine increase power output [8] and CMJ height by 3.76–4.3% in different athletes [5,15]. Bloms et al. [5] have reported that caffeine increases peak force and average rate of force development (RFD). However, in these studies only concentric phase metrics were evaluated, which could be a limited assessment of the whole jump since the stretch-shortening cycle has not been analyzed. Just one study presents insights into the effects of caffeine in all phases of a CMJ [6]. The authors observed that caffeine increases concentric phase kinetics and kinematics, however, caffeine did not modify any temporal or performance metrics during the eccentric phase, as similarly observed by Lago-Rodríguez et al., [9]. Despite the observed performance enhancing effects of a low dose of caffeine on bilateral CMJ, the hypothetic potential of caffeine to improve single-leg jump performance and the absence of side effects in comparison to higher doses (i.e., 6 and 9 mg/kg) [16], to the authors’ knowledge, no research has established the possible enhancing effects of 3 mg/kg of caffeine on bilateral and unilateral countermovement jump kinetics and kinematics in the different phases of the jump. Therefore, the aim of this research was twofold: (i) to identify the effects of 3 mg/kg on the performance and temporal outcomes of bilateral CMJ in all its phases and (ii) to establish the possible ergogenic effects of this dose on performance and temporal metrics of the unilateral CMJ. We hypothesized that 3 mg/kg of caffeine would increase the concentric metrics of both bilateral and unilateral CMJ kinetics and kinematics as this dose appears to increase high velocity-low resistance actions [16].

A double-blind, placebo-controlled, crossover design was used in this investigation to determine the possible ergogenic effects of 3 mg/kg of caffeine on performance, kinetics and kinematics of the bilateral and unilateral CMJ. The collected dependent variables included typical CMJ variables, alternative concentric and alternative eccentric metrics, as classified previously [17].
Sixteen (n = 16) elite traditional Jiu-Jitsu athletes were enrolled in this investigation. The participants were eight men (height = 176.87 ± 6.31 cm; height = 72.59 ± 10.11 kg; age = 21.50 ± 4.75 years; training experience = 11.88 ± 3.94 years; weekly training = 11.63 ± 1.85 h/week), and eight women (height = 165.63 ± 6.39 cm; weight = 64.86 ± 6.33 kg; age = 20.63 ± 3.20 years; training experience = 15.38 ± 2.92 years; weekly training = 11.75 ± 2.19 h/week). Due to a force platform software error analysis, just the results of 14 participants were included in the analysis for the unilateral jump. All the participants who fulfilled the following inclusion criteria: (a) aged between 18 and 35 years old; (b) caffeine naïve or low habitual caffeine consumers (<0.99 mg/kg/BM/day), were selected for participation. Subjects were excluded if they reported (a) medication usage within the previous month; (b) a previous history of cardiopulmonary diseases; or (c) use of oral contraceptive pills, as they may interfere with caffeine pharmacokinetics. Participants were informed about the experimental procedures and the possible risks and benefits associated with taking part in the investigation. Additionally, they signed the written informed consent form to participate in this research. The study and informed consent procedures were approved by the University Ethics Committee under the latest version of the Declaration of Helsinki.

On two different days, participants carried out two familiarization sessions to establish inter-day reliability of the dependent variables. Both familiarization sessions were spaced 72 h apart, with 3 bilateral CMJ and 6 unilateral CMJ (3 with the left leg and 3 with the right leg) performed. The mean value of each three attempts was entered into the statistical analysis as averaged jumps were more sensitive than the highest jump in detecting fatigue or adaptations [10]. Participants rested three minutes between each attempt. All participants carried out the jumps at the same time of day. The same standardized warm-up was performed before each session which included 5 min of cycling with a rate of perceived exertion (RPE) of 5/10, 3 min of hip, knee and ankle mobility and 10 bodyweight squats [18]. Participants followed the instructions to jump as high as possible and received the same verbal encouragement during the trials.

Each athlete carried out two identical experimental trials, separated by a week to allow complete recovery and substance wash-out. Each participant performed 3 CMJ with both legs, 3 CMJ with the right leg and 3 CMJ with the left leg on a force platform, and 3 min of rest were programmed between each attempt. Participants ingested an unidentifiable capsule with either caffeine anhydrous (3 mg/kg·bm, Bulk Powders 100% purity, Colchester, UK) or an inert substance (Placebo; cellulose, Guinama, Valencia, Spain) 60 min before data collection. This time frame is adequate for maximizing blood caffeine concentration [19]. This dose was selected due to the benefits of increasing lower limb mechanical performance without increasing the possible side effects associated with caffeine consumption [15]. The capsules were prepared by an external researcher to ensure the blinding protocol. An alphanumeric code was assigned to each trial to blind the trial condition to participants and researchers. This coding was not revealed until the data had been analyzed.
All jumps were performed on a ForceDecks FD4000 Dual Force Platform (ForceDecks, London, United Kingdom), with a sampling rate of 1000 Hz. The collected data from each jump was entered into the ForceDecks software (ForceDecks, London, United Kingdom) to analyze each jump and generate all of the dependent variables. The reliability of the dependent variables is presented in Table 1. The onset of the movement was determined when a drop of 20 N from measured weight was produced. Vertical jump was divided into eight key phases: weighing phase, eccentric phase, braking phase, deceleration phase, concentric phase, flight phase and landing phase. To be accurate in the weighing phase, at least one second of measurement was used [11]. The eccentric phase was determined as the jump phase with negative center of mass (COM) velocity. Additionally, the braking phase was the subphase within the eccentric phase, which lasted from the instant where minimum force was detected until the end of the eccentric phase. The deceleration phase started at the moment that negative peak velocity was achieved and finished at the end of the eccentric phase (COM minimum displacement). The concentric phase started at the moment when velocity became positive and ended at take-off. The flight phase lasted from take-off to the landing and the landing phase lasted from the point where the force rose above 30 N and returned to bodyweight (Figure 1). The collected dependent variables included in this research were established based on the classification by Heishman et al. [17].

Statistical significance tests were carried out using IBM SPSS Statistics for Macintosh, Version 26.0 (IBM Corp., Armonk, NY, USA) and Microsoft Excel (2013; Microsoft Corporation, Albuquerque, NM, USA). The sample size was estimated using free software (G*Power v3.1). Sample size estimation revealed that 12 participants were sufficient for a one-tailed paired sample t-test with an effect size of 1.2. This effect size was calculated with the mean and SD of placebo and caffeine CMJ height from the previous literature and a Pearson correlation of 0.97 (data obtained during familiarization) assuming 5% type I and type II errors. A paired sample t-test was performed to identify the effects of 3 mg/kg of caffeine. If any dependent variable did not achieve the Shapiro-Wilk normality assumption, the Wilcoxon test was used. Between pairs, at 95% CI, Cohen’s d effect size (ES) was calculated using an excel spreadsheet. Intraclass Correlation Coefficient (ICC), Standard Error of the Measurement (SEM) and minimum detectable change (MDC) at 95% confidence interval (95% CI) [20] were calculated. ICC values were analyzed based on the following criteria: poor reliability, <0.5; moderate reliability, 0.5–0.75; good reliability, 0.75–0.90; and excellent reliability, >0.90 [21]. Cohen’s d estimated magnitudes were calculated and classified in all between-groups comparisons [22]. Results are expressed as mean ± standard deviation (SD). The significance level was set at p < 0.05.

Most of the variables for bilateral and unilateral jumps presented more than acceptable reliability (Table 1).

The intake of 3 mg/kg of body weight of caffeine in elite Jiu-Jitsu athletes is an ergogenic aid that increases the performance of both bilateral and unilateral vertical jumps, and also modifies jump execution along with the different phases of the countermovement.

The study was conducted according to the guidelines of the Declaration of Helsinki, and approved by the Institutional Review Board of the Francisco de Vitoria University (7/2020, 22 March 2021).

The authors wish to thank the subjects for their invaluable contribution to the study. 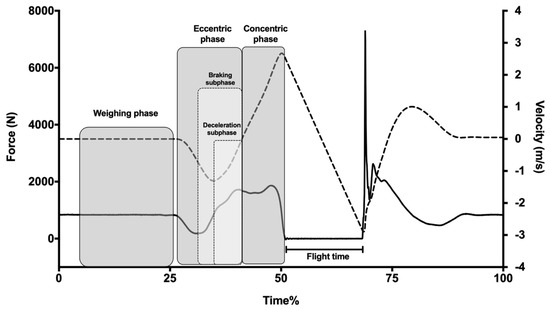 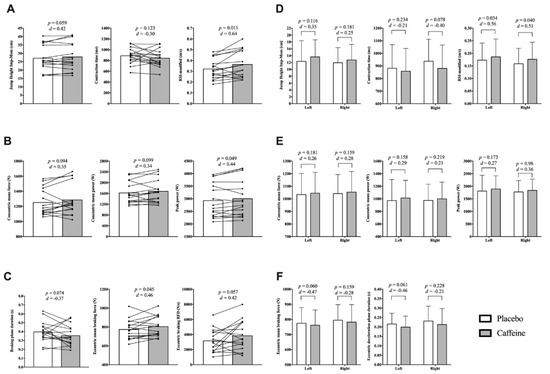 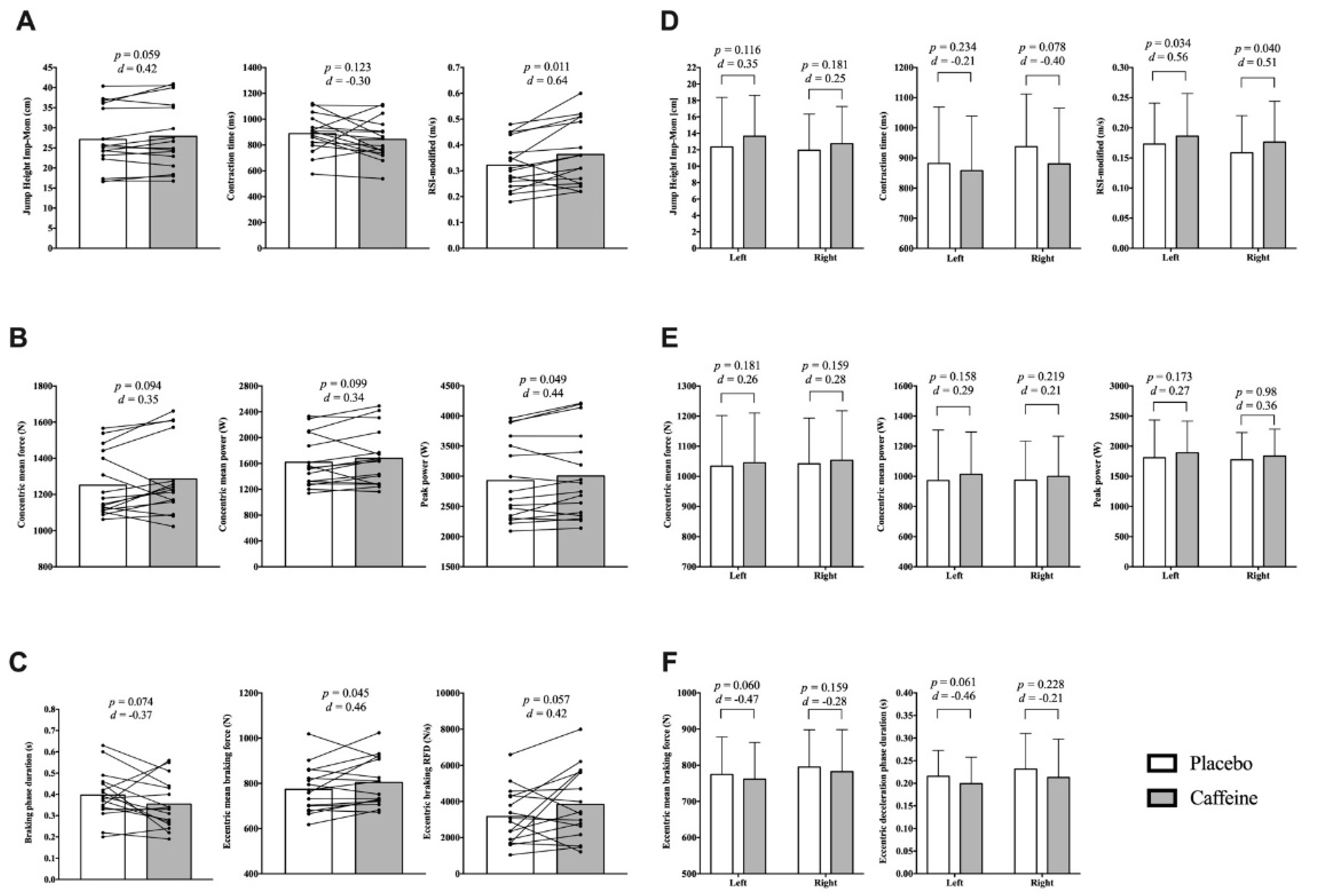