John B. Cronin
1 and

Nutritional intake can influence exercise metabolism and performance, but there is a lack of research comparing protein-rich pre-exercise meals with endurance exercise performed both in the fasted state and following a carbohydrate-rich breakfast. The purpose of this study was to determine the effects of three pre-exercise nutrition strategies on metabolism and exercise capacity during cycling. On three occasions, seventeen trained male cyclists (VO2peak 62.2 ± 5.8 mL·kg−1·min−1, 31.2 ± 12.4 years, 74.8 ± 9.6 kg) performed twenty minutes of submaximal cycling (4 × 5 min stages at 60%, 80%, and 100% of ventilatory threshold (VT), and 20% of the difference between power at the VT and peak power), followed by 3 × 3 min intervals at 80% peak aerobic power and 3 × 3 min intervals at maximal effort, 30 min after consuming a carbohydrate-rich meal (CARB; 1 g/kg CHO), a protein-rich meal (PROTEIN; 0.45 g/kg protein + 0.24 g/kg fat), or water (FASTED), in a randomized and counter-balanced order. Fat oxidation was lower for CARB compared with FASTED at and below the VT, and compared with PROTEIN at 60% VT. There were no differences between trials for average power during high-intensity intervals (367 ± 51 W, p = 0.516). Oxidative stress (F2-Isoprostanes), perceived exertion, and hunger were not different between trials. Overall, exercising in the overnight-fasted state increased fat oxidation during submaximal exercise compared with exercise following a CHO-rich breakfast, and pre-exercise protein ingestion allowed similarly high levels of fat oxidation. There were no differences in perceived exertion, hunger, or performance, and we provide novel data showing no influence of pre-exercise nutrition ingestion on exercise-induced oxidative stress.
Keywords: nutrition; exercise; fat oxidation; oxidative stress; isoprostanes nutrition; exercise; fat oxidation; oxidative stress; isoprostanes

Nutritional intake before exercise can influence performance and the physiological responses to an exercise session [1]. Exercise performed with reduced carbohydrate (CHO) availability can increase fat oxidation, increase the activation of cell signaling pathways, and promote oxidative adaptations in skeletal muscle [2,3]. At the same time, sufficient CHO ingestion before and/or during exercise is recommended for exercise sessions requiring a high quality, duration, and/or intensity [4]. It is therefore suggested that CHO ingestion be varied according to the goals and type of each exercise session to optimize both training adaptations and acute performance, yet there is wide variance among athletes regarding appropriate nutritional intake before exercise [5].
Strategies to vary CHO availability before exercise include ingesting high- or low-CHO meals, and exercising in the overnight-fasted state. We recently reported nearly two-thirds of endurance athletes (63%) train in the overnight-fasted state, while 72% consume CHO before some or all training sessions, and only 28% ever consume low-CHO meals before exercise [5,6]. Athletes perform fasted-state training primarily to increase fat oxidation and improve gut comfort during exercise, while athletes that avoid fasted training do so because they feel their workout quality deteriorates and/or they will be too hungry during exercise [6]. It is well established that performing low-to-moderate intensity exercise in the overnight-fasted state can induce higher levels of fat oxidation compared with exercise performed following ingestion of CHO [3]. However, several studies have shown fat oxidation during exercise to be similar following protein ingestion compared with a placebo (fasted) condition [7,8]. Therefore, pre-exercise protein ingestion may be an alternative to performing fasted-state training that could reduce hunger while maintaining high levels of fat oxidation. Additional research is needed to better understand differences in substrate oxidation between CHO-fed, protein-fed, and fasted-state training, as previous studies using pre-exercise protein ingestion have either not had a CHO control group [7,8], performed extended exercise at a single intensity [7,8,9], or provided very large (>1000 kcal) pre-exercise meals [10,11].
From a performance standpoint, fed-state exercise generally enhances prolonged (>60 min), but not shorter duration (<60 min) aerobic exercise compared with exercising in the fasted state [12], although few studies have used a high-intensity interval training (HIIT) model to measure performance despite HIIT being performed by virtually all endurance athletes [13]. Total work performed during HIIT has been reported to be increased in the fed, compared with the fasted state during some [14,15] but not all [16] studies. To our knowledge, no studies have compared pre-exercise CHO, protein, and fasted-state training on HIIT work capacity.
More important for athletes and coaches than an acute training session are the longer-term training adaptations. Exercise-induced oxidative stress provides a key signal for the adaptative response to an exercise session with greater exercise-induced oxidative stress being associated with improved adaptations [17,18], but it is unknown how this might be affected by various pre-exercise meals. At rest, a high-CHO meal can evoke a greater postprandial oxidative stress response compared with a high-fat meal [19], while whey protein can enhance endogenous antioxidant enzyme activity [20]. Furthermore, CHO ingestion before and during exercise can decrease exercise-induced oxidative stress during longer-duration moderate-intensity cycling [21]. Therefore, an understanding of how nutrition influences exercise-induced oxidative stress would be valuable as it could inform pre-exercise nutrition strategies.
Research comparing pre-exercise protein with pre-exercise CHO ingestion and fasted-state training across a range of exercise intensities is needed and could help endurance athletes and coaches make better pre-exercise nutrition choices. Accordingly, the aim of this crossover study was to determine the effects of three different pre-exercise nutrition strategies on substrate oxidation, performance during HIIT, and exercise-induced oxidative stress. We hypothesized that the fasted and protein conditions would have the highest fat oxidation, while cycling power during HIIT would be highest following CHO ingestion. Secondary outcomes were to determine the influence of the pre-exercise meal on cycling gross efficiency, heart rate (HR), and rating of perceived exertion (RPE) during moderate and high intensity cycling, along with hunger and gut comfort before and after exercise.

Intervals 1–3 were performed at 80%Wmax, corresponding to 340 ± 44 W. The subsequent three intervals were performed as maximal efforts, with no differences between treatments for average power (p = 0.516, Figure 4A). Similarly, there were no differences in RPE or lactate (Figure 4B,C) between trials. However, contrasts between treatments showed HR was higher during PROTEIN compared with FASTED at each interval (all p = 0.004, Figure 4D).

In summary, fat oxidation during submaximal exercise was highest in the overnight-fasted state and following pre-exercise protein ingestion. There were no differences in work capacity, RPE, oxidative stress, or hunger between treatments. Consuming a low-CHO meal before submaximal exercise will not meaningfully impair fat oxidation and eating a high- or low-CHO meal does not confer additional performance benefit during HIIT compared with training in the overnight-fasted state. Therefore, athletes who wish to increase fat oxidation but promote energy balance can use pre-exercise protein ingestion as a viable alternative to fasted training sessions. Conversely, for shorter duration higher intensity sessions, fasted training and protein ingestion are also viable choices as performance was not compromised, suggesting athletes can choose whether to eat based on personal preference. However, longer-term training studies are needed as the net adaptive responses of chronic CHO or protein ingestion prior to exercise is unknown.

This research was partially funded by the G.N.C. Research Grant from the NSCA Foundation.

The study was conducted according to the guidelines of the Declaration of Helsinki and approved by the Ethics Committee of AUT University (19/420 on 19 March 2020).

Data can be made available on request.

We thank Horleys for generously donating the protein and carbohydrate drink mixes. 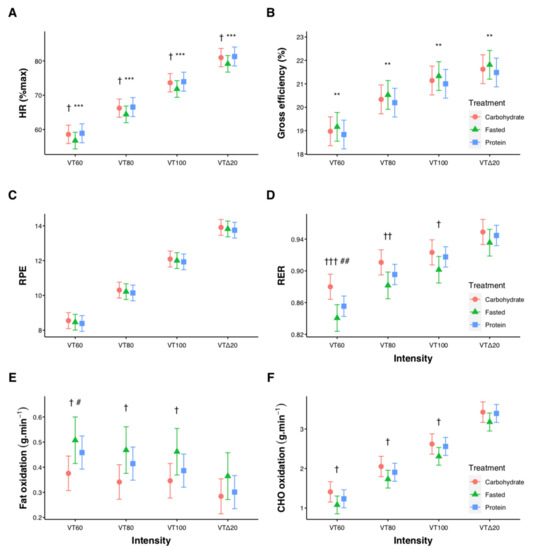 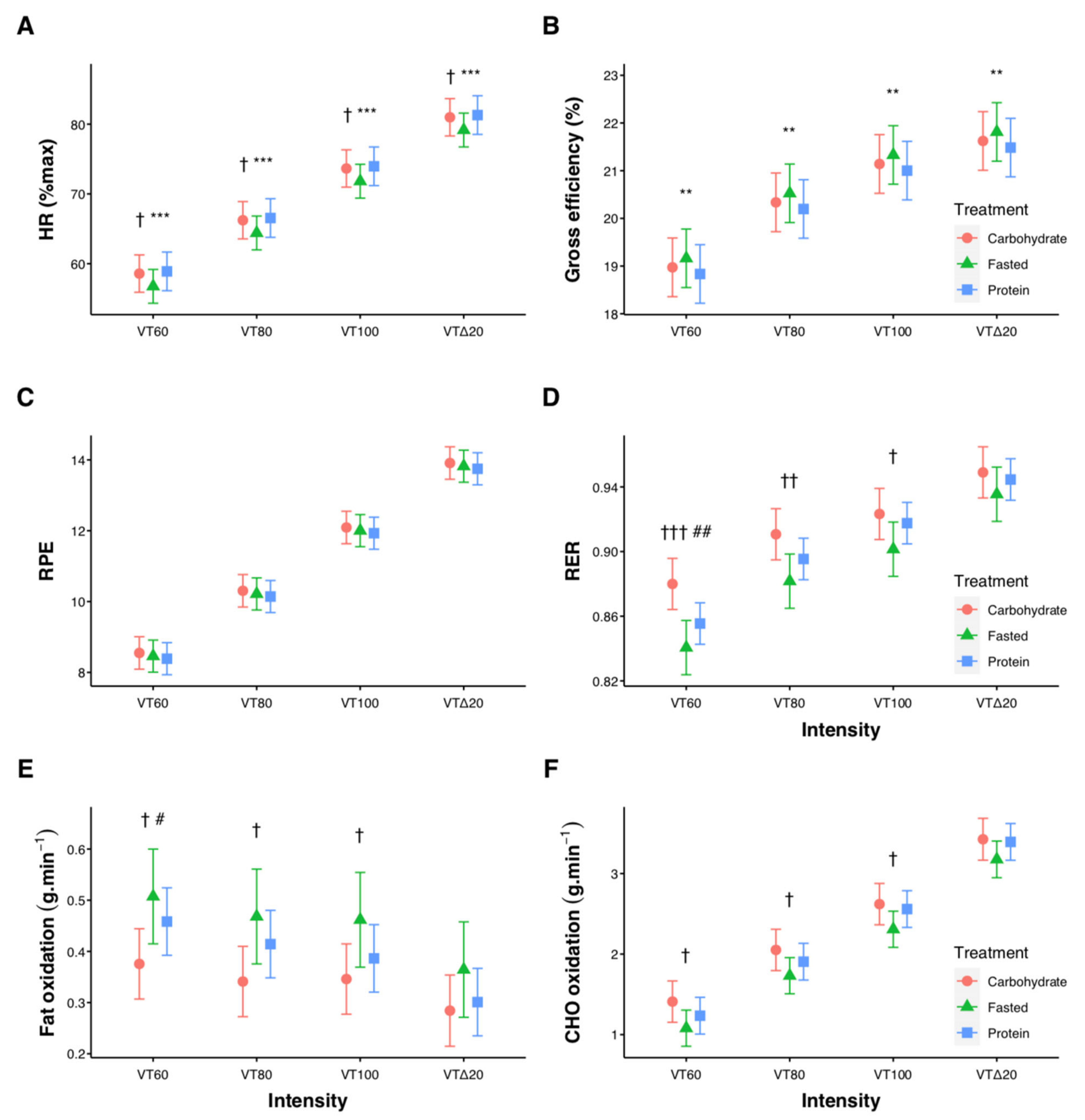 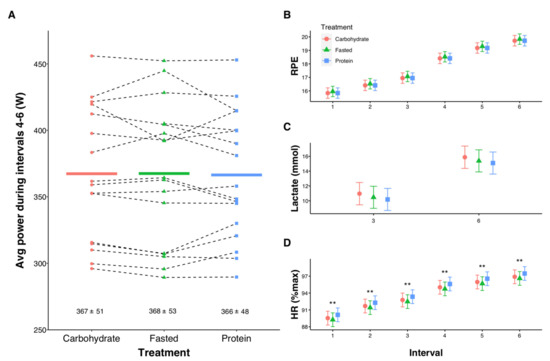 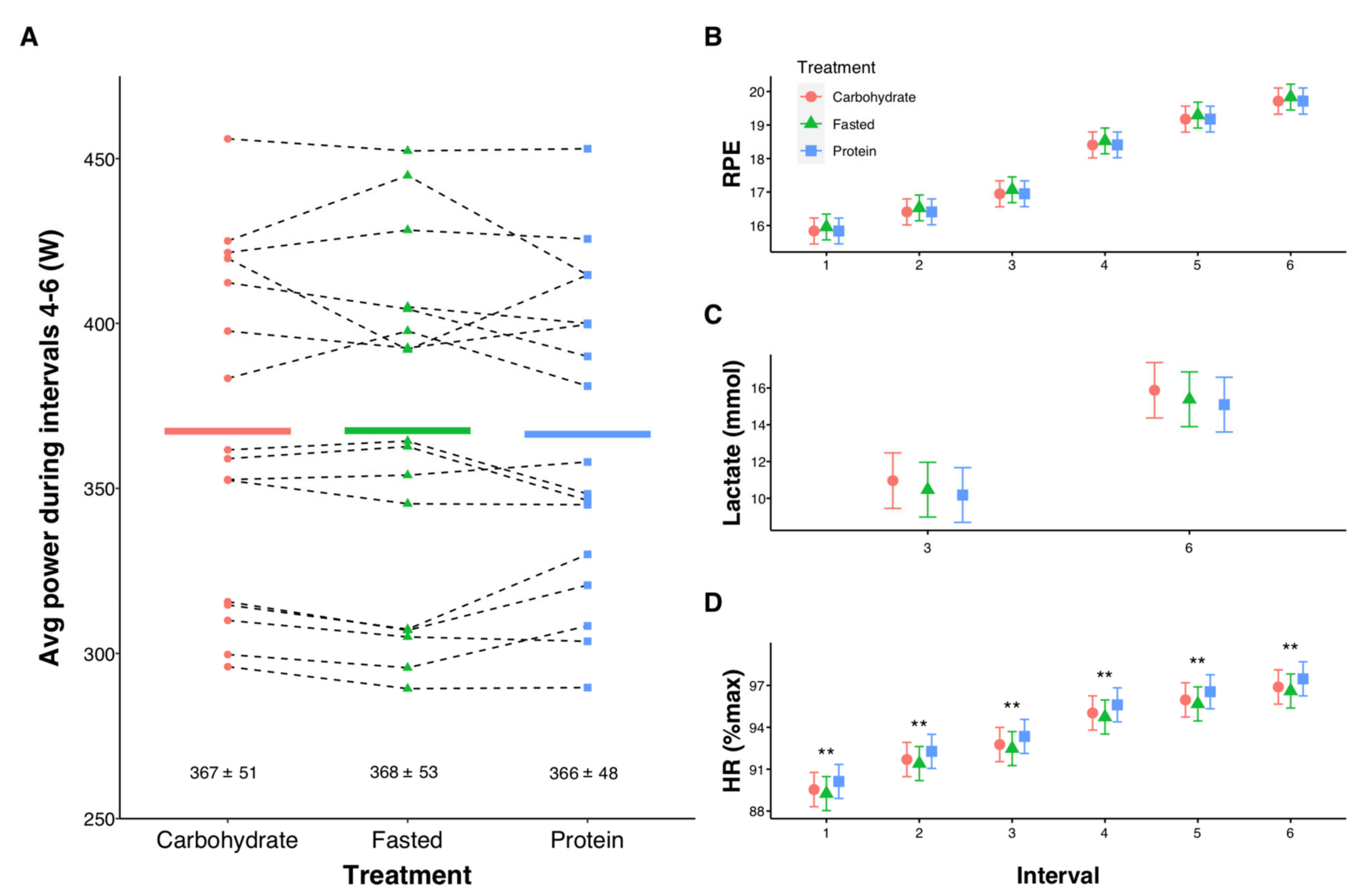 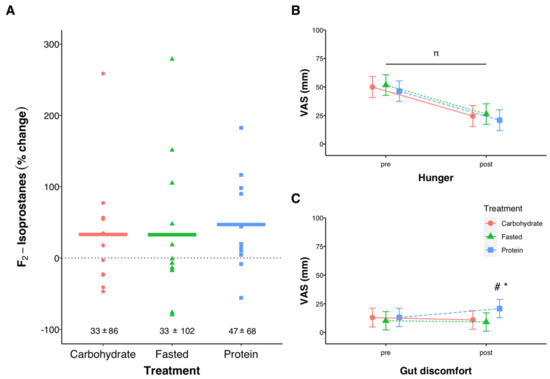 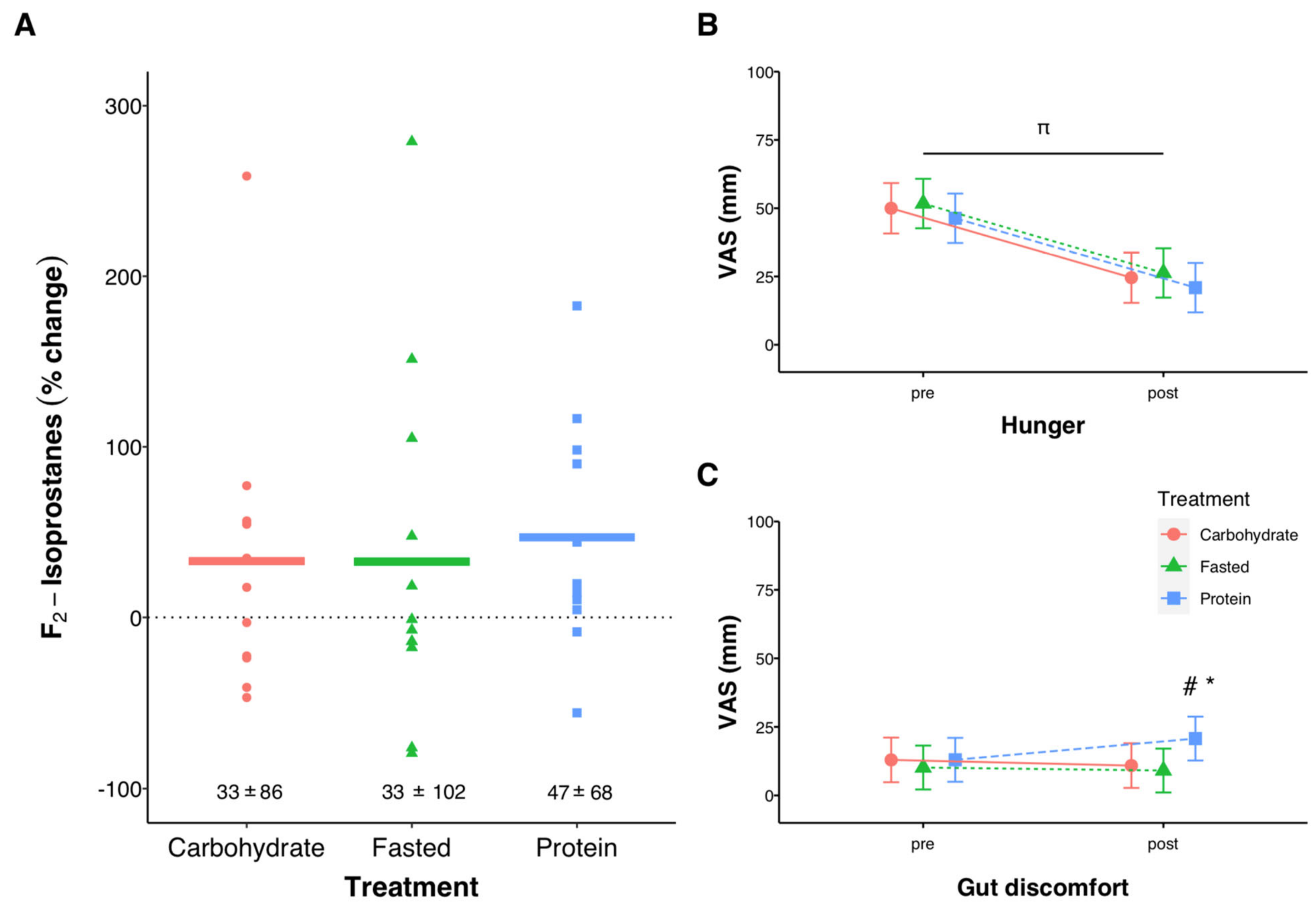