Education Interventions to Improve Knowledge, Beliefs, Intentions and Practices with Respect to Dietary Supplements and Doping Substances: A Narrative Review

The potential of KDP, a lactic acid bacterial strain of Lactobacillus sakei, to enhance the production of mucosal specific immunoglobulin A (IgA) in mice and thereby enhance gut mucosal immunity was examined. KDP is composed of dead cells isolated from the Korean traditional food kimchi. Female BALB/c mice orally received 0.25 mg KDP once daily for 5 weeks and were co-administrated ovalbumin (OVA) for negative control and cholera toxin for positive control. Mice administered KDP exhibited increased secretory IgA (sIgA) contents in the small intestine, Peyer’s patches, serum, colon, and lungs as examined by ELISA. KDP also significantly increased the gene expression of Bcl-6, IL-10, IL-12p40, IL-21, and STAT4. In addition, KDP acted as a potent antioxidant, as indicated by its significant inhibitory effects in the range of 16.5–59.4% for DPPH, nitric oxide, maximum total antioxidant capacity, and maximum reducing power. Finally, KDP exhibited potent antimicrobial activity as evidenced by a significant decrease in the growth of 7 samples of gram-negative and gram-positive bacteria and Candida albicans. KDP’s adjuvant effect is shown to be comparable to that of cholera toxin. We conclude that KDP can significantly enhance the intestine’s secretory immunity to OVA, as well as act as a potent antioxidant and antimicrobial agent. These results suggest that orally administered KDP should be studied in clinical trials for antigen-specific IgA production. View Full-Text
Keywords: IgA; secretory; KDP; Peyer’s patches; OVA albumin; antioxidant; antimicrobial IgA; secretory; KDP; Peyer’s patches; OVA albumin; antioxidant; antimicrobial
►▼ Show Figures 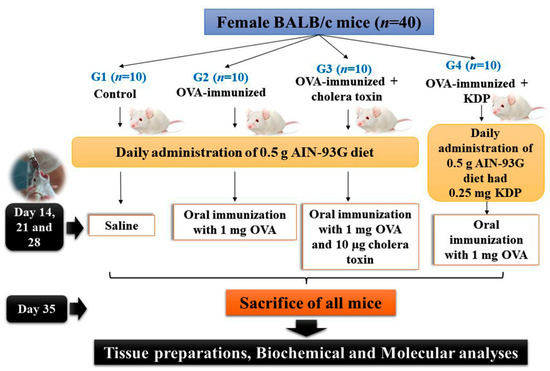