:
The application of metabolomics in neonatology offers an approach to investigate the complex relationship between nutrition and infant health. Characterization of the metabolome of human milk enables an investigation into nutrients that affect the neonatal metabolism and identification of dietary interventions for infants at risk of diseases such as necrotizing enterocolitis (NEC). In this study, we aimed to identify differences in the metabolome of breast milk of 48 mothers with preterm infants with NEC and non-NEC healthy controls. A minimum significant difference was observed in the human milk metabolome between the mothers of infants with NEC and mothers of healthy control infants. However, significant differences in the metabolome related to fatty acid metabolism, oligosaccharides, amino sugars, amino acids, vitamins and oxidative stress-related metabolites were observed when comparing milk from mothers with control infants of ≤1.0 kg birth weight and >1.5 kg birth weight. Understanding the functional biological features of mothers’ milk that may modulate infant health is important in the future of tailored nutrition and care of the preterm newborn.
Keywords:
breast milk; necrotizing enterocolitis; metabolomics; metabolites; human milk; prematurity; newborn

Human breast milk metabolomics aims to identify the complete set of low molecular weight metabolites in maternal milk. This is a promising approach for metabolic fingerprinting and phenotyping of maternal milk to highlight variations in composition related to maternal health and diet and the resulting impact on the infant. Variations in the bioactive components of human milk have been shown to influence neonatal health outcomes, including growth, development, protection from disease development, neurodevelopment, and immunological development [1,2,3,4,5,6,7,8,9].
Few studies have explored the comprehensive metabolome of human breast milk. Proton (1H) nuclear magnetic resonance (NMR) spectroscopy and mass spectrometry (MS) are the most employed methods for metabolomic analysis of human milk. The first human milk metabolomic analysis was performed in 2012 as a potential screening tool for milk composition in the first month of lactation for mothers with preterm low birth weight infants using 27 human milk samples [10]. When compared to infant formula, significant differences were identified in the metabolic profile comparison, with preterm maternal milk containing higher concentrations of lactose and formula containing higher concentrations of maltose, oleic and linoleic acids [10].
The investigation into the benefits of human milk and neonatal disease prevention is an active field of study in neonatology. Metabolomic analyses of human milk have extensively explored human milk oligosaccharides (HMOs), the third most abundant component in milk after lactose and fat [11]. Other bioactive metabolites, including those derived from fatty acids, amino sugars, amino acids, microbial byproducts, vitamins and oxidative stress-related compounds, are multipurpose and have known protective roles against the pathogenesis of neonatal diseases such as necrotizing enterocolitis (NEC). In high-risk preterm infants, dysregulation of barrier integrity and immunity of the intestine contribute to the development of NEC, a gastrointestinal emergency that affects approximately 10% of infants with a birth weight <1500 g [12,13]. It has been shown that an early and exclusive human milk diet is associated with a lower risk of developing NEC in very low birth weight infants [14,15]. In this study, we aim to examine the global metabolomic profile of human milk in preterm infants who developed NEC versus age-matched control preterm infants. We hypothesized that metabolites of human milk from mothers of infants with NEC may be distinctly different from the metabolomic profile of milk from mothers of healthy preterm controls. Further, we examined the effect of birth weight on breast milk composition in non-NEC infants.

Following consent, samples of breast milk from mothers of infants admitted to St. Louis Children’s Hospital neonatal intensive care unit (NICU) were obtained as part of a longitudinal cohort study with institutional IRB approval. After a sufficient volume of maternal breast milk could be expressed to meet an infant’s nutritional requirements, up to 3 mL of breast milk was collected for this study. Unfortified breast milk samples from 48 mothers with preterm infants (<37 weeks) included in this study were collected between Aug 2017 and Nov 2020, and were stored in 1 mL aliquots at −80 °C within 24 h of collection. Samples from mothers whose infants developed NEC were matched with a control sample obtained on a similar postnatal day of an infant of a similar corrected age. Additional samples from mothers of infants who did not develop NEC were combined with the corrected age-matched control samples for a comparison of a ≤1.0 kg and a >1.5 kg birth weight group. For sample processing, banked samples were thawed on ice and 250 µL of milk was aliquoted into sterile polypropylene tubes. Clinical information from the medical record was also obtained for study subjects, including maternal prenatal history, delivery history and NICU hospitalization course of the infant.

Samples were prepared by Metabolon, Inc. with the automated MicroLab STAR® system from Hamilton Company using an established method [16,17]. Proteins were precipitated with methanol under vigorous shaking for two minutes (Glen Mills GenoGrinder 2000, Clifton, NJ, USA) followed by centrifugation to remove protein and to recover chemically diverse metabolites. The resulting extract was divided into five fractions: two for analysis by two separate reverse phase (RP)/Ultrahigh Performance Liquid Chromatography-Tandem Mass Spectroscopy (UPLC-MS/MS) methods with positive ion mode electrospray ionization (ESI), one for analysis by RP/UPLC-MS/MS with negative ion mode ESI, one for analysis by HILIC/UPLC-MS/MS with negative ion mode ESI, and one sample was reserved for backup. Samples were placed briefly on a TurboVap® (Zymark, Hopkinton, MA, USA) to remove the organic solvent. The sample extracts were stored overnight under nitrogen before preparation for analysis.

Several controls were analyzed in concert with the experimental samples: a pooled matrix sample generated by taking a small volume of each experimental sample (or alternatively, the use of a pool of well-characterized human plasma), which served as a technical replicate throughout the data set; extracted water samples served as process blanks; and a cocktail of QC standards that were carefully chosen not to interfere with the measurement of endogenous compounds were spiked into every analyzed sample, allowed instrument performance monitoring and aided chromatographic alignment. Experimental samples were randomized across the platform run with QC samples spaced evenly among the injections [17].

Raw data were extracted, peak-identified and QC processed by Metabolon (Metabolon, Inc., Morrisville, NC, USA). Compounds were identified by comparison to library entries of purified standards or recurrent unknown entities. Biochemical identifications are based on three criteria: retention index within a narrow RI window of the proposed identification, accurate mass match to the library ±10 ppm, and the MS/MS forward and reverse scores between the experimental data and authentic standards. The MS/MS scores are based on a comparison of the ions present in the experimental spectrum to the ions present in the library spectrum. Peaks were quantified by Metabolon, Inc. using the area-under-the-curve with a data normalization step was performed to correct variation resulting from instrument inter-day tuning differences.

Statistical analysis was performed by Metabolon as well as using MetaboAnalyst 5.0 (https://www.metaboanalyst.ca, accessed date on 6 June 2021) for pathway and enrichment analyses. Following log transformation and imputation of missing values, if any, with the minimum observed value for each compound, Welch’s two-sample t-test was used to identify biochemicals that differed significantly between experimental groups, while outliers were identified using the ROUT method. Biochemicals that achieved statistical significance (p ≤ 0.05) and demonstrated a low estimate of false discovery rate (q > 0.10) were included in this analysis.

3.1. Clinical Characteristics of the Cohort

3.5. Metabolic Differences in the Microbiome-Derived and Vitamin Metabolites in Maternal Milk

Human milk metabolomics is a developing field for the exploration of the relationship between the metabolic composition of breast milk, maternal phenotypes, and infant health. While the complexities of maternal milk require ongoing investigation, new technologies and new analytical methodologies are essential in the future of research on the role of the comprehensive metabolome on the health of the infant. Though minimal significant metabolic differences were identified in the milk of mothers of infants with NEC and non-NEC controls, we identified significant differences in milk composition by infant birth weight. Understanding the complexities of human milk therefore provides important insight for the future of tailored nutrition of the newborn.

The study was conducted according to the guidelines of the Declaration of Helsinki, and approved by the Institutional Review Board of Washington University (protocol code 201706182 and date of approval 27 July 2017).

Informed consent was obtained from all mothers of infants on behalf of themselves and their neonate for this study.

The authors declare no conflict of interest. None of the funding sources had any role in the manuscript. 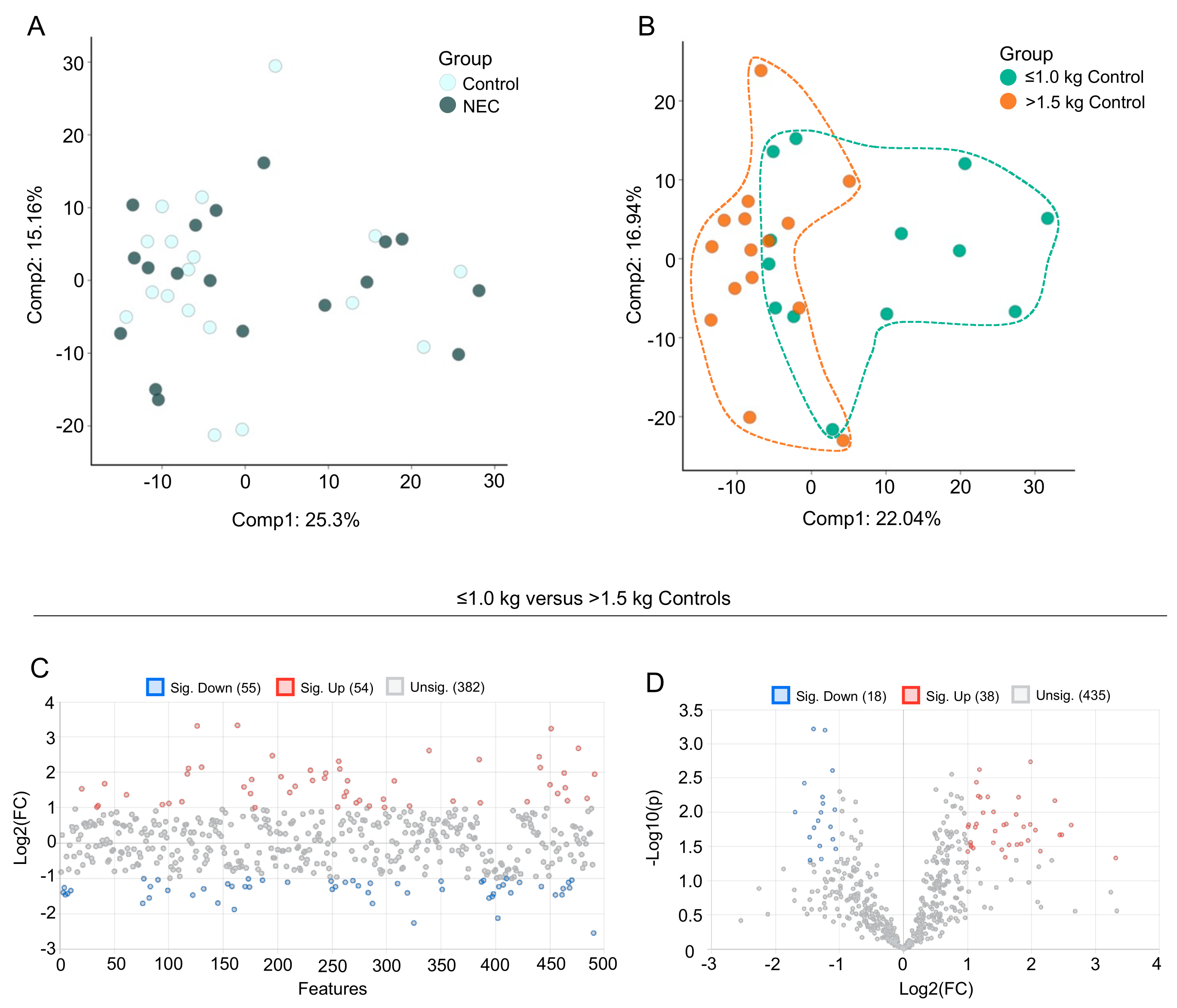