Whey Protein Drink Ingestion before Breakfast Suppressed Energy Intake at Breakfast and Lunch, but Not during Dinner, and Was Less Suppressed in Healthy Older than Younger Men
Previous Article in Journal

Humans and other mammals, when given a choice, generally prefer food that contains fats, sugars, or a combination of both [1]. Homeostatic and hedonic feeding are controlled by diverse, albeit overlapping, neural and molecular signaling pathways throughout the brain, including those regulated by the endocannabinoid (eCB) system [2,3,4,5]. Recent studies, however, suggest important roles for the peripheral eCB system in energy homeostasis and intake of palatable food [6,7,8,9,10,11,12,13,14,15,16,17,18,19,20,21,22,23,24,25,26,27,28,29]. For example, we reported that tasting dietary lipids was sufficient to increase levels of eCBs in the rat upper small-intestinal epithelium, which required an intact vagus nerve, and pharmacological inhibition of cannabinoid subtype-1 receptors (CB1Rs) in the periphery blocked consumption of lipids [14,15]. Moreover, levels of eCBs in the upper small-intestinal epithelium were increased in mice maintained for eight weeks on a western-style diet high in fat and sugar (WD) when compared to mice fed a standard diet low in fat and sugar, and pharmacological inhibition of CB1Rs in the periphery blocked overeating associated with WD-induced obesity [17].
Nutrients are sensed by gustatory cells in the oral cavity and enteroendocrine cells in the intestinal epithelium. In response, these cells release several satiation- and satiety-related molecules that communicate with the brain via a mechanism that includes the afferent vagus nerve [30,31,32,33,34,35,36,37,38]. We recently reported that eCB signaling in the gut controls nutrient-induced release of satiation peptides [16]. Gene transcripts for CB1Rs were enriched in a subpopulation of enteroendocrine cells in the upper small-intestinal epithelium that secrete the satiation peptide, cholecystokinin [16,39]. Notably, the ability for nutrients to stimulate an increase in levels of circulating cholecystokinin was impaired in mice fed WD for eight weeks when compared to lean control mice, and pharmacological inhibition of overactive eCB signaling at peripheral CB1Rs in mice fed WD restored the ability for nutrients to induce release of cholecystokinin [16]. Furthermore, the appetite-suppressing effects of peripheral CB1R inhibition in mice maintained on WD were attenuated by co-treatment with an antagonist for cholecystokinin-A receptors [16], which are expressed by sensory vagal neurons and other organs [40]. Collectively, these studies suggest that eCB signaling in upper small-intestinal epithelium is dysregulated in WD-induced obese mice and promotes overeating by a mechanism that includes blocking nutrient-induced gut–brain satiation signaling.
In the current study, we used a novel conditional intestinal epithelium-specific CB1R-deficient mouse model to investigate if CB1Rs in the intestinal epithelium are required for WD preferences.

C57BL/6Tac male mice (Taconic, Oxnard, CA, USA) or transgenic mice (described below in Transgenic Mouse Generation) 8–10 weeks of age were group-housed with ad-libitum access to a standard rodent laboratory diet (SD; Teklad 2020x, Envigo, Huntingdon, UK; 16% kcal from fat, 24% kcal from protein, 60% kcal from carbohydrates) and water throughout all experiments. Mice were maintained on a12-h dark/light cycle beginning at 1800 h. All procedures met the U.S. National Institute of Health guidelines for care and use of laboratory animals and were approved by the Institutional Animal Care and Use Committee (IACUC Protocol 20200023) of the University of California, Riverside.

Mice were single-housed in two-hopper feeding chambers (TSE Systems, Chesterfield, MO, USA) for five days to acclimate, and received ad-libitum access to SD and water throughout behavioral testing. At the time of testing, mice were given access for the first time to the hopper containing Western Diet (WD; Research Diets D12079B, New Brunswick, NJ, USA; 40% kcal from fat, 17% kcal from protein, 43% kcal from carbohydrates as mostly sucrose). Food weights were measured in real time and recorded every minute using Phenomaster software (TSE Systems). Preferences for WD versus SD (% total kcals from WD), total caloric intake of each diet (kcals), average meal size of each diet (kcals), and meal frequency were calculated from recorded data, beginning one hour before the dark cycle (1700 h). The criteria for a meal was consumption of a minimum of 0.1 g of food with an inter-meal interval less than 30 min.

IntCB1−/− and IntCB1+/+ mice were administered tamoxifen (Intraperitoneal, 40 mg per kg) every 24 h for five consecutive days. Tamoxifen (Sigma-Aldrich, St. Louis, MO, USA) was dissolved in corn oil at a concentration of 10 mg per mL then stored at 37 °C protected from light until administration. Tamoxifen in corn oil was placed in a bath sonicator for 10 min prior to administration. Mice were group housed in disposable cages throughout the injection window and for a 3-day post-injection period. The CB1R antagonist/inverse agonist, AM251 (Tocris, Minneapolis, MN, USA), was administered (Intraperitoneal, 3 mg per kg per 2 mL) 30 min prior to testing. The vehicle consisted of 7.5% dimethyl sulfoxide (DMSO, Sigma-Aldrich, St. Louis, MO, USA), 7.5% Tween 80 (Chem Implex Intl Inc., Wood Dale, IL, USA), and 85% sterile saline.

3.2. Acute Preferences for Western Diet are Absent in Mice with CB1R Deletion in the Intestinal Epithelium

This study was funded by the National Institutes of Health, National Institute of Diabetes and Digestive and Kidney Diseases grants DK119498 and DK114978, and the Tobacco-Related Disease Research Program (TRDRP) from the University of California Office of the President grant T29KT0232 to N.V.D. In addition, we thank the Ford Foundation Dissertation Fellowship to D.A. 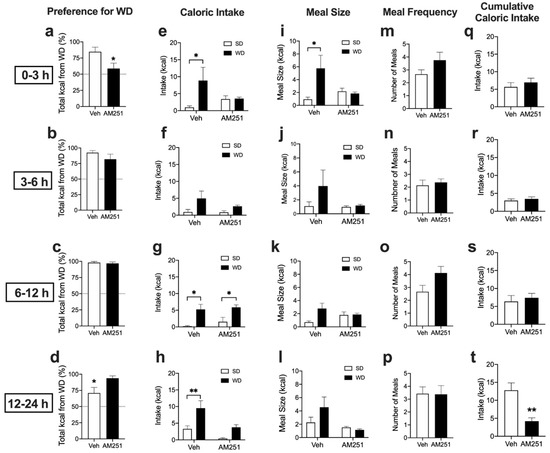 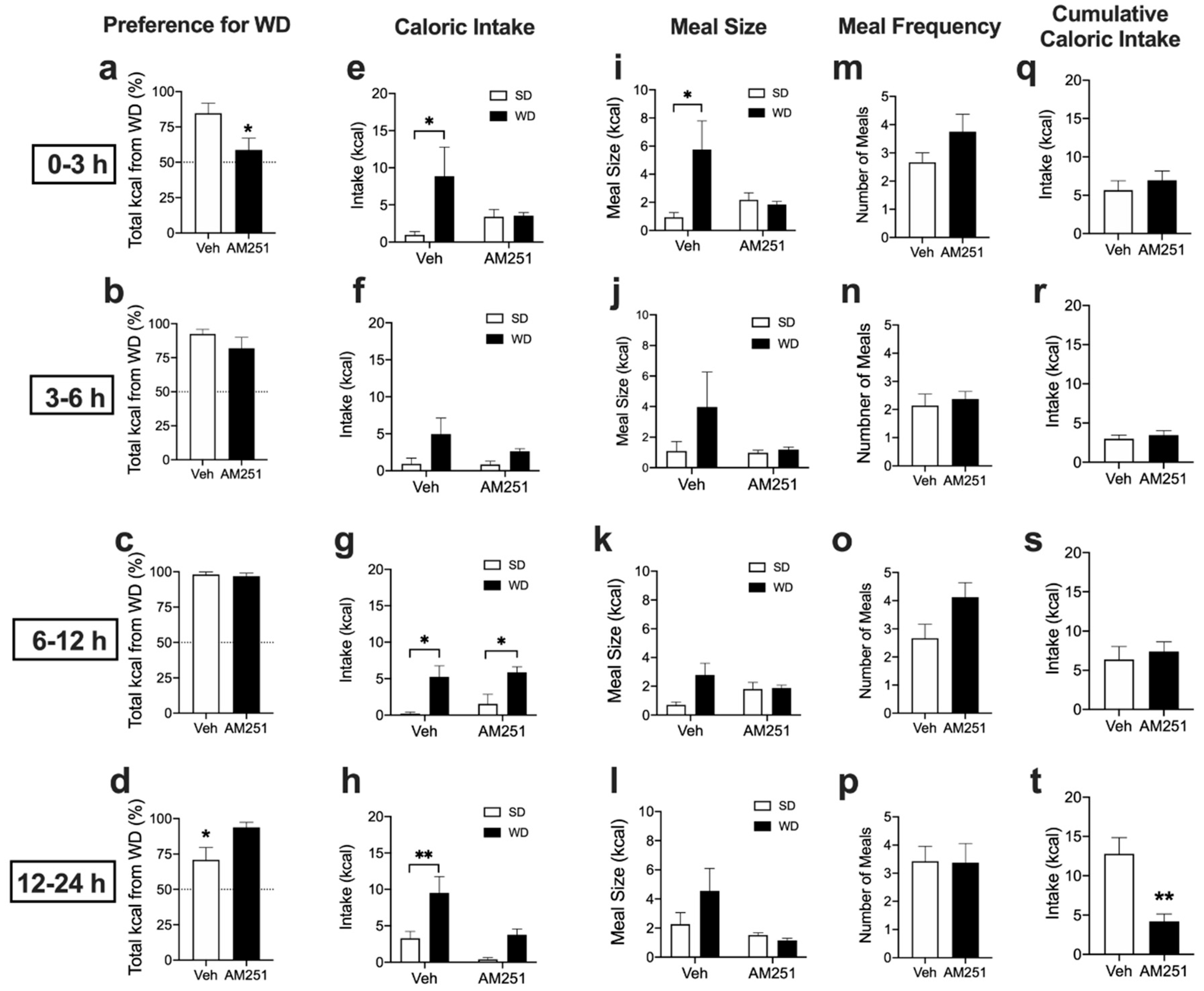 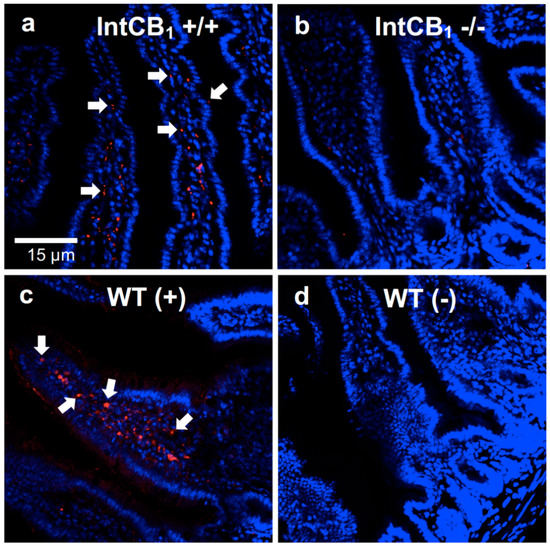 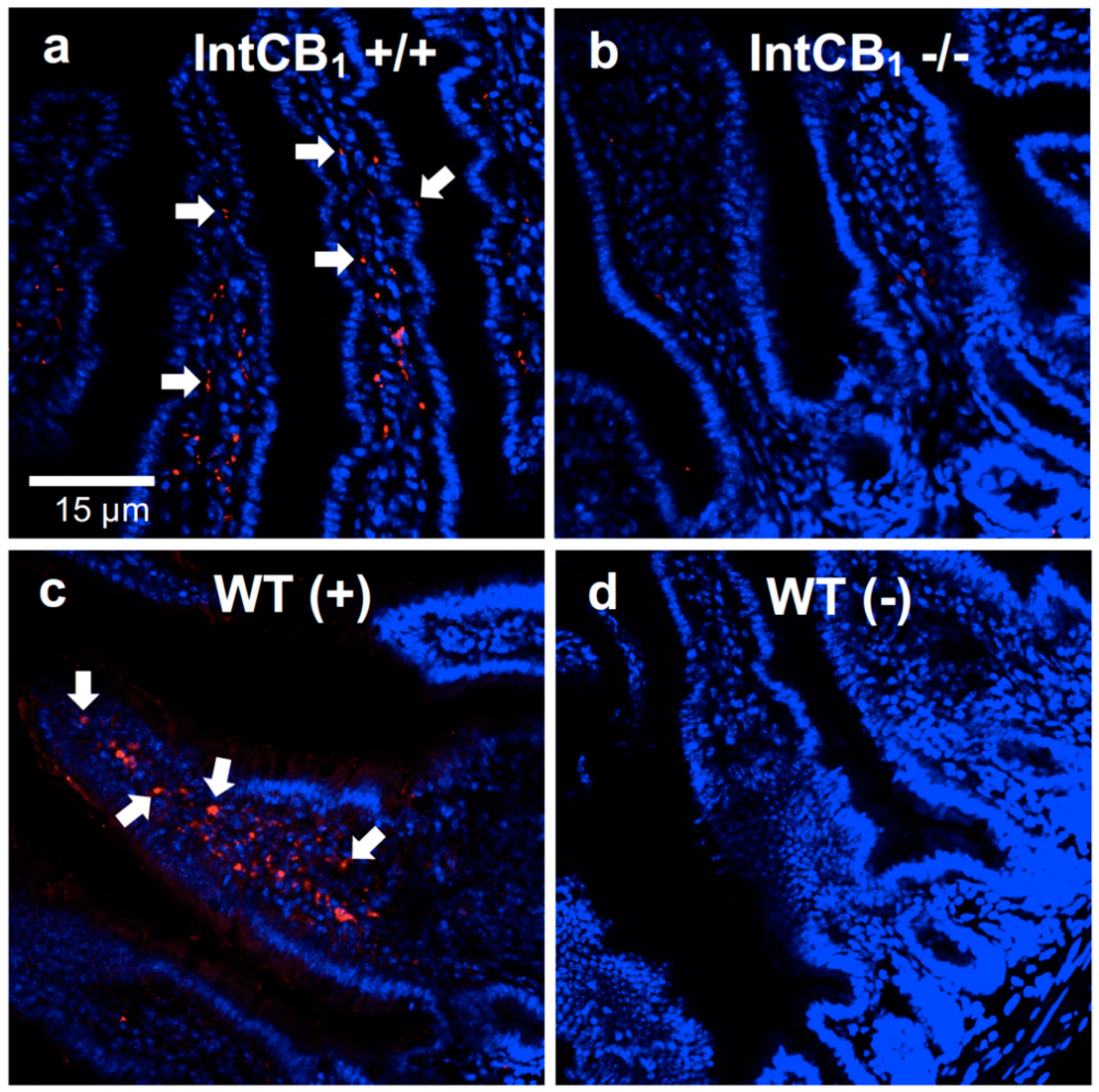 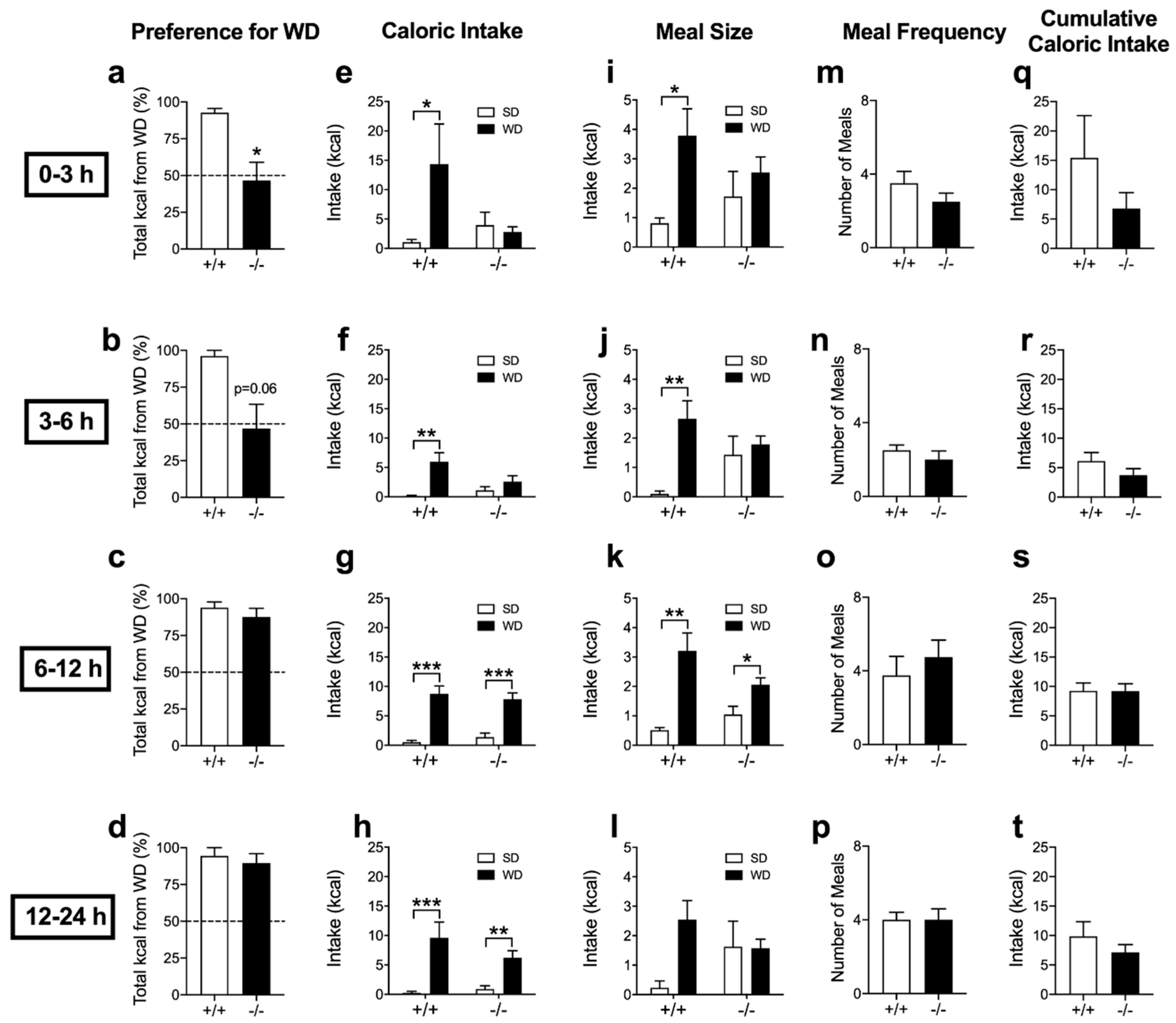