Mothers’ Nutrition Knowledge Is Unlikely to Be Related to Adolescents’ Habitual Nutrient Intake Inadequacy in Japan: A Cross-Sectional Study of Japanese Junior High School Students
Next Article in Special Issue

Blueberry (BB) consumption is linked to improved health. The bioconversion of the polyphenolic content of BB by fermentative bacteria in the large intestine may be a necessary step for the health benefits attributed to BB consumption. The identification of specific gut microbiota taxa that respond to BB consumption and that mediate the bioconversion of consumed polyphenolic compounds into bioactive forms is required to improve our understanding of how polyphenols impact human health. We tested the ability of polyphenol-rich fractions purified from whole BB—namely, anthocyanins/flavonol glycosides (ANTH/FLAV), proanthocyanidins (PACs), the sugar/acid fraction (S/A), and total polyphenols (TPP)—to modulate the fecal microbiota composition of healthy adults in an in vitro colon system. In a parallel pilot study, we tested the effect of consuming 38 g of freeze-dried BB powder per day for 6 weeks on the fecal microbiota of 17 women in two age groups (i.e., young and older). The BB ingredients had a distinct effect on the fecal microbiota composition in the artificial colon model. The ANTH/FLAV and PAC fractions were more effective in promoting microbiome alpha diversity compared to S/A and TPP, and these effects were attributed to differentially responsive taxa. Dietary enrichment with BB resulted in a moderate increase in the diversity of the microbiota of the older subjects but not in younger subjects, and certain health-relevant taxa were significantly associated with BB consumption. Alterations in the abundance of some gut bacteria correlated not only with BB consumption but also with increased antioxidant activity in blood. Collectively, these pilot data support the notion that BB consumption is associated with gut microbiota changes and health benefits. View Full-Text
Keywords: polyphenols; blueberries; gut microbiota; in vitro; human study; oxidative stress polyphenols; blueberries; gut microbiota; in vitro; human study; oxidative stress
►▼ Show Figures 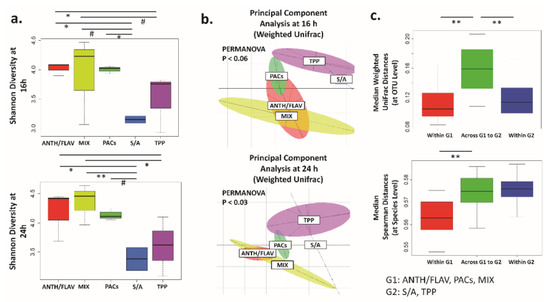