The Antiviral, Anti-Inflammatory Effects of Natural Medicinal Herbs and Mushrooms and SARS-CoV-2 Infection
Next Article in Special Issue

Chickpea has been classified as a nutraceutical food due to its phytochemical compounds, showing antioxidant, anti-inflammatory, and anticancer activity. To investigate this, we evaluated the effect of cooking on the nutritional and non-nutritional composition and the in vitro and in vivo antioxidant activity of chickpea seed. The latter was determined by the variation in the concentration of nitric oxide (NO), oxidized carbonyl groups (CO), malondialdehyde (MDA), and the expression of 4-hydroxy-2-nonenal (4-HNE) in the colon of male BALB/c mice fed with a standard diet with 10 and 20% cooked chickpea (CC). We induced colon cancer in mice by administering azoxymethane/dextran sulfate sodium (AOM/DSS); for the evaluation, these were sacrificed 1, 7, and 14 weeks after the induction. Results show that cooking does not significantly modify (p < 0.05) nutritional compounds; however, it decreases the concentration of non-nutritional ones and, consequently, in vitro antioxidant activity. The in vivo evaluation showed that animals administered with AOM/DSS presented higher concentrations of NO, CO, MDA, and 4-HNE than those in animals without AOM/DSS administration. However, in the three evaluated times, these markers were significantly reduced (p < 0.05) with CC consumption. The best effect on the oxidation markers was with the 20% CC diet, demonstrating the antioxidant potential of CC. View Full-Text
Keywords: legumes; cooked chickpea; antioxidant activity; oxidation markers; colon cancer legumes; cooked chickpea; antioxidant activity; oxidation markers; colon cancer
►▼ Show Figures 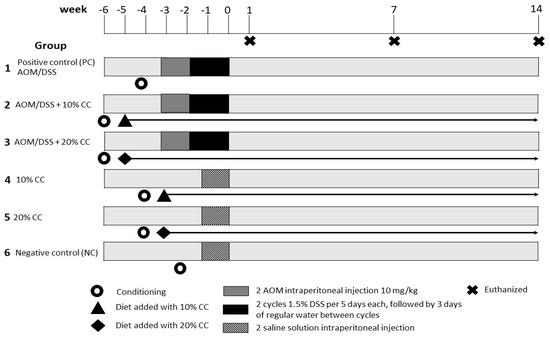