Who Reads Food Labels? Selected Predictors of Consumer Interest in Front-of-Package and Back-of-Package Labels during and after the Purchase
Previous Article in Journal

Dietary fibre is a generic term describing non-absorbed plant carbohydrates and small amounts of associated non-carbohydrate components. The main contributors of fibre to the diet are the cell walls of plant tissues, which are supramolecular polymer networks containing variable proportions of cellulose, hemicelluloses, pectic substances, and non-carbohydrate components, such as lignin. Other contributors of fibre are the intracellular storage oligosaccharides, such as fructans. A distinction needs to be made between intrinsic sources of dietary fibre and purified forms of fibre, given that the three-dimensional matrix of the plant cell wall confers benefits beyond fibre isolates. Movement through the digestive tract modifies the cell wall structure and may affect the interactions with the colonic microbes (e.g., small intestinally non-absorbed carbohydrates are broken down by bacteria to short-chain fatty acids, absorbed by colonocytes). These aspects, combined with the fibre associated components (e.g., micronutrients, polyphenols, phytosterols, and phytoestrogens), may contribute to the health outcomes seen with the consumption of dietary fibre. Therefore, where possible, processing should minimise the degradation of the plant cell wall structures to preserve some of its benefits. Food labelling should include dietary fibre values and distinguish between intrinsic and added fibre. Labelling may also help achieve the recommended intake of 14 g/1000 kcal/day.
Keywords: dietary fibre; labelling; carbohydrate quality; ICQC; consensus dietary fibre; labelling; carbohydrate quality; ICQC; consensus

Conceptually, dietary fibre is a generic term describing non-absorbed plant carbohydrates and relatively small amounts of associated non-carbohydrate components (e.g., phenolic compounds, waxes, and proteins) that are not digested by endogenous enzymes or absorbed in the human small intestine [1,2]. Some forms of dietary fibre are digested by intestinal bacterial enzymes and utilised as substrates for growth and metabolism. The main contributors of fibre to the diet are the cell walls of plant tissues, which are supramolecular polymer networks containing variable proportions of cellulose, hemicelluloses, pectic substances, and the non-carbohydrate components, such as the phenolic compound lignin (Figure 1). Other sources of fibre in the diet include fructans (e.g., inulins), which are not part of the plant cell walls but are synthesised and stored in the cell vacuole [3,4].
However, there is much that is not known about dietary fibre, in part because the structure of the plant cell wall, which makes up the majority of our dietary fibre, has not been fully elucidated. In turn, the overall structure of the polymers, and how they interact with each other within the plant cell wall, is not yet fully understood [3,4]. Added to this, what occurs to the matrix of the cell wall during chewing (Figure 2) and movement through the digestive tract is not clear [5], and a substantial percentage of dietary fibre is digested by the microbes in the colon. The nature and actions of the microbiome are just beginning to be explored [6].

There is still disagreement about the definition of dietary fibre and how this very complex array of plant materials should be analysed. Current definitions are typically based around descriptions provided by national and international bodies for food standards, such as CODEX Alimentarius, and have focused on fibre being the non-digested and/or non-absorbed fraction of food carbohydrates derived from plants [7,8,9,10,11]. Dietary fibre definitions around the world have been summarised (10), and countries adopting the CODEX definition include Australia, Canada, China, the European Union, Malaysia, New Zealand, and the USA, among others. The US Food and Drug Administration issued a position paper in 2018 on what constitutes dietary fibre for food labelling purposes [11].
It may be useful to distinguish between dietary fibre, as plant cell walls (the main source of fibre) that are part of the plant food matrix, and fibre supplements that are added to food products for a specific physiological/health outcome (e.g., laxation, cholesterol-lowering, and prebiotic activity) [5]. The term natural fibre may be better described as dietary fibre that is intrinsically part of the cell wall material in edible plants such as fruits, vegetables, cereals, nuts, pulses, and even seaweed in some diets (from now on defined as intrinsic fibre). The intrinsic fibre may be modified when processed commercially and/or domestically and may not have the same physiological and metabolic effects of the original intrinsic fibre. These include the purified fibres derived from cereals (e.g., mixed-linkage β-glucans from barley and oats, among others). Some commercially available types of fibre are semi-synthetic, such as hydroxypropyl methylcellulose, which is a chemically modified cellulose. These may also be called novel types of dietary fibre in certain countries (e.g., Canada).
Another distinction seen in the literature is insoluble versus soluble fractions of fibre, which are classified by chemical analysis but not based on their functional behaviour in vivo [5]. These fractions are based on early attempts to classify fibre according to their dissolution properties in aqueous media in the laboratory. There are different chemical methods used for determining dietary fibre (e.g., the gravimetric AOAC method and GC analysis of non-starch polysaccharides) and values do vary significantly, as do the values for ‘soluble’ and ‘insoluble’ fractions. These broad classifications continue to be used in nutrition and public health literature, despite their limited use in providing information about functional properties in the gut, and their specific effects on metabolism. Solubility and viscosity are terms often used interchangeably to describe the same type of fibre; however, a soluble fibre that dissolves in aqueous media may not be viscous. Water-soluble types of fibre have the ability to lower fasting blood cholesterol and postprandial glycaemia [12]. These metabolic effects are linked to the capacity of soluble fibre to increase digesta viscosity and slow down the digestion of starch and other macronutrients. The viscosity-enhancing property of a soluble fibre is highly dependent on its polymer concentration and molecular weight, assuming it has solubilised in the gut.

4. Recommendations to the Public and to Health Professionals

It is generally agreed that dietary fibre is an important part of a sustainable, balanced, healthy diet [34]. Consumption of dietary fibre is below the recommended intake levels for optimal health in many parts of the world and may be decreasing. We recommend maintaining or increasing dietary fibre intake to the recommended levels.
We support the Institute of Medicine recommendations for the total dietary fibre of 14 g/1000 kcal/day. We suggest that this should mainly come from intrinsic dietary fibre. Data from cohort studies with intakes beyond this amount are limited, but many traditional societies consume larger amounts and have a lower risk of chronic diseases.

5. Recommendations to the Food Industry

The food industry plays an important role in developing new food ingredients and products that have public health benefits and are also highly palatable. In developing new high-fibre foods, the sensory characteristics are important and will strongly influence whether people consume them. At the same time, if these do not have nutritional benefits then such products would be of little nutritional value, regardless of how technologically innovative they may be. It is important to recognise that increasing the fibre content on the food label does not guarantee any enhanced nutritional benefits in a product.
Recommendations to the food industry would depend on the reasons why particular types of fibre are being added, and how they are processed, given that mechanical and hydrothermal processing can affect their properties. For example, in wheat grain there is an advantage in preserving some of the structural integrity of the cell walls of the starch-rich endosperm, in order to produce flour that is digested more slowly and has a beneficial impact on postprandial glycaemia (23). However, if the health outcome is to improve the iron bioavailability in wheat, then there may be advantages to micro-milling (rupturing) the aleurone cell layer, which has a high iron concentration (28). In producing foods for the general population, the first example would be the most appropriate recommendation while, for populations with nutritional deficiencies, the second recommendation may preferentially apply. Therefore, we generally encourage the food industry to preserve many of the benefits of dietary fibre rich foods by minimising the degradation of the plant cell wall structures and tissue architecture, while maintaining palatability, except in situations of special dietary requirements and specific physiological or clinical outcomes (e.g., the use of prebiotic oligosaccharides and viscous polysaccharides).
Currently, labelling the dietary fibre content of foods in certain countries around the world, including Europe, is not mandatory. This represents a problem for consumers, researchers, and medical staff dealing with patient diets. We support the mandatory use of fibre on food labels.
Labelling should distinguish between fibre that is endogenous to foods and that added as a functional supplement because synthetic or purified fibre will not be accompanied by the micronutrients and phytochemicals in foods and, thus, may not predict the same health outcomes. Functional (or other) supplemental fibre, where permitted, should be listed separately among ingredients. The labelling of dietary fibres could be of the form “FIBRE N g PER 100 g, of which X g is SUPPLEMENTAL”.

Dietary fibre and its associated non-carbohydrate components have been inversely associated with disease outcomes. Food labelling should include dietary fibre, and distinguish between intrinsic and purified added fibre, given that the intact plant cell wall may confer benefits beyond fibre isolates. The labelling of dietary fibre may also help to achieve the recommended intake of 14 g/1000 kcal/day for health benefits. To extend these recommendations, further studies on the interrelation of dietary fibre, prebiotics, and health, which aim to optimise both the health potential of foods and related food processing methods, are advised. This would include how the structures and the 3D matrix, composition, and physico-chemical properties of dietary fibre affect digestion, gastrointestinal function, and the role of the microbiome. 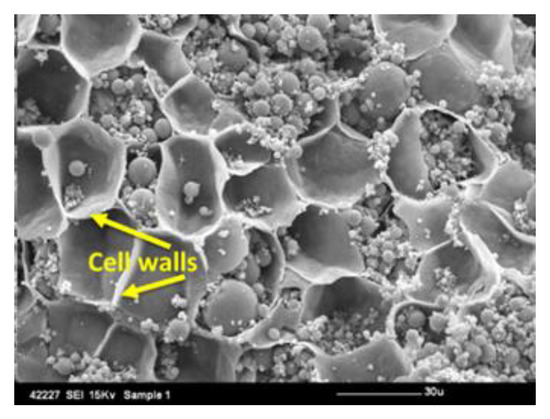