The Development of High-Quality Multispecies Probiotic Formulations: From Bench to Market

Some rural areas of Ecuador, including the Imbabura Province of the Andes Highlands, are experiencing a double burden of malnutrition where micronutrient deficiencies persist at the same time obesity is increasing as many traditional home-grown foods are being replaced with more commercially prepared convenience foods. Thus, the relationships among agricultural food production diversity (FPD), dietary diversity (DD), and household food insecurity (HFI) of the rural small holder farmers need further study. Therefore, we examined these associations in small holder farmers residing in this Province in the Andes Highlands (elevation > 2500 m). Non-pregnant maternal home managers (n = 558, x age = 44.1, SD = 16.5 y) were interviewed regarding the number of different agricultural food crops cultivated and domestic animals raised in their family farm plots. DD was determined using the Minimum Dietary Diversity for Women Score (MDD-W) based on the number of 10 different food groups consumed, and household food insecurity (HFI) was determined using the 8-item Household Food Insecurity Experience Scale. The women reported consuming an average of 53% of their total food from what they cultivated or raised. Women with higher DD [MMD-W score ≥ 5 food groups (79% of total sample)] were on farms that cultivated a greater variety of crops (x = 8.7 vs. 6.7), raised more animals (x = 17.9 vs. 12.7, p < 0.05), and reported lower HFI and significantly higher intakes of energy, protein, iron, zinc, and vitamin A (all p < 0.05). Multiple regression analyses demonstrated that FPD was only modestly related to DD, which together with years of education, per capita family income, and HFI accounted for 26% of DD variance. In rural areas of the Imbabura Province, small holder farmers still rely heavily on consumption of self-cultivated foods, but greater diversity of crops grown in family farm plots is only weakly associated with greater DD and lower HFI among the female caretakers.
Keywords: nutrition; food crop diversity; dietary diversity; food insecurity; women; Ecuador nutrition; food crop diversity; dietary diversity; food insecurity; women; Ecuador

This cross-sectional study was conducted in 12 parroquias (political subdivisions) located in six cantons (Figure 1) situated above 2500 m in the Imbabura Province of the Ecuadorian Andes Highlands, primarily populated by Indigenous Ecuadorians. These parroquias were chosen in order to obtain a representative sample of areas in the Province where small holder farming is often more difficult due to the elevation and steep slopes of the cultivated hillsides. A previous unpublished pilot study was conducted in this region March through May of 2015 for purposes of identifying the magnitude of agricultural diversity on small holder farms. For this pilot study, presidents of each of the 12 parroquias provided a list of small holder farm households and from the respective lists, households were randomly sampled using GIS mapping. Agricultural crop diversity ranged from cultivation of only 2–3 different species to up to 40 different species on individual farms. For the current study, permission was again obtained from the respective parroquia presidents, and the same households were again selected and surveyed from March to May 2018, using the same GIS mapping previously used by a member of the research team (MJ Romero). When the potential maternal study participant from the identified household was not available, the female caretaker in the nearest household located to the right was interviewed. Highly trained agronomy and nutrition professionals were used as research assistants to collect data. They were local to the area and understood the common agricultural practices and possessed key cultural and nutrition-related knowledge. Several of the assistants spoke Kichwa, the primary Indigenous language of this area and were especially helpful in communicating with some of the older women who were more comfortable communicating in Kichwa than Spanish. The assistants explained the purpose of the study and requirements for participation, read the consent form to women, answered any questions, and for those willing to participate, obtained written informed consent. For those who were unable to write, a thumb print in lieu of a signature was collected. Research was approved by the Institutional Review Board and Bioethics Committees at both Colorado State University (CSU protocol #17-7492H) and the Universidad San Francisco de Quito (USFQ protocol #2017-142IN), respectively. The study sample consisted of a total of 558 non-pregnant, maternal caretakers between the ages of 18–85 years with a mean age of 44 years (SD = 16.3). Mean body mass index was 27.1 kg/m2 (SD = 4.3). Forty-four percent of the women were classified as overweight (BMI: 25–29.9 kg/m2) and 23% classified as obese (BMI > 30 kg/m2). The study was delimited to women due to their important role in food acquisition and preparation for their families and because many men in the selected rural areas are often employed away from home and not available for study participation. Eighty-four percent of the women reported their daily work was household management and/or farming. Seventy-two percent of the women self-identified their ethnicity as Indigenous, 27% identified as Mestiza, and 1% as other. There were no notable differences in demographic, anthropometric, dietary, and agricultural farm characteristics among ethnic groups, thus all ethnic groups were examined together as a single sample.

The survey instrument was developed to record sociodemographic variables, anthropometric measures, dietary and agricultural data, and perceptions of household food insecurity. It was patterned after a survey instrument used in a previous study examining characteristics of the nutrition transition in urban and rural areas of the Chimborazo region of the Ecuadorian Andes Highlands [8].

Dietary intake was determined using a multiple pass 24-h dietary recall. Participants were interviewed by a nutritionist and asked to report all foods and beverages consumed the previous day. The interviewers were nutrition professionals, educated at the Universidad Técnica del Norte (Technical University of the North), which is the major comprehensive university in the Province. The nutritionists were familiar with the dietary patterns in the province and used various measuring utensils, plates, cups, and bowls.to help respondents report as accurately as possible the different types and amounts of foods and beverages consumed during the previous day. The nutritionists were instructed to probe for information regarding serving sizes, second helpings, methods of food preparation including boiling, frying, and roasting, types and amounts of oil used in cooking, snacks consumed, individual ingredients used in casserole type dishes and soups, and unsweetened and sugar-sweetened beverage consumption included aromatic water (agua aromatica, herb-infused water usually sweetened with sucrose). Dietary data recorded from all 24-h recalls were entered into a database for nutrient analysis (total kcalories, g of macronutrients, mg of iron and zinc, and retinol equivalents of vitamin A) using food values developed in the Encuesta Nacional de Salud y Nutrición en Ecuador (ENSANUT-ECU 2012) [6].

The diversity of crops grown on the farms was determined by both interview and actual observation of crops by the agronomist research assistants when visiting each farm. Each study participant was asked to identify all food crops, fruit trees, and plants used for alimentation currently being grown on their farms. These crops were recorded and additionally the agronomist further probed about plant foods commonly grown in this region and recorded any additional crops, trees, plants they observed to be growing on the smallholder farms, both in larger plots and in smaller domestic gardens, that were not identified in the interview. Respondents were also asked to identify the types and number of animals on their farms raised for food. They were specifically asked whether or not they raised any of 10 different species of animals (chickens, guinea pigs, rabbits, ducks, turkeys, quail, cattle, sheep, goats, and pigs), from which food could be obtained including animal flesh, internal organs, eggs, and dairy products (cow’s and goat’s milk). Three specific variables were calculated to describe food production diversity of the farms: (1) the number of different crops grown for food; (2) the total number of animals raised for food; and (3) the food production diversity (FPD) score, which was determined by categorizing the cultivated crops and animal food products (animal flesh and organs, dairy, and eggs) on each small holder farm according to the same 10 food groups used to determine DDS [21]. Possible FPD scores ranged from 0–10 going from lowest to highest production diversity.

To describe the physical characteristics of the participants, height, weight, and body mass index (BMI) were determined. Body weight was measured using a portable digital scale to the nearest 0.1 kg with participants wearing light clothing. Participants were asked to remove shoes, hats, jackets, sweaters, and jewelry. It was not possible to obtain nude weights of the participants and because traditional lightweight clothing among rural Ecuadorian women includes multiple layers estimated to weigh approximately 1.0 kg, a kg was subtracted from the measured weight of each participant. While certainly not exact, this approach to quantifying weight more accurately represents the participants’ true body weights. Height was measured to the nearest 0.1 cm using a portable stadiometer with participants standing erect with the head position in a Frankfort horizontal plane. BMI was calculated as weight (kg)/height (m)2. Respondents were asked to estimate their usual monthly family monetary income from all possible sources. This value was then divided by the total number of family members living in the home to determine the per capita family monetary income. Respondents also reported the number of years of formal education they completed, which ranged from 0–18 years.

Data were numerically coded, entered in a spreadsheet, and checked for errors and outliers. The data were then transferred into an IBM SPSS (IBM Corporation, version 26, Armonk, NY, USA) spreadsheet and analyzed. Multivariate Analysis of Variance (MANOVA) was used to examine differences in the characteristics of the women and the agricultural practices between those who met the minimum dietary score for women [Higher Dietary Diversity (HDD) = MDD−W score ≥ 5, i.e., consumption of ≥5 of the 10 possible different food groups] and the women who did not meet the minimum [Lower Dietary Diversity (LDD) = MDD−W score < 5, i.e., consumption of <5 of the 10 possible different food groups]. Chi-Square analyses were used to examine the percentages of LDD and HDD women both producing and consuming different food groups. Simple correlation analyses were used to examine the strength of the associations among DD (number of food crops cultivated, total number of farm animals raised for food or food products, agricultural FPD score, HFI, age, education, and per capita income. Those variables significantly correlated with DD were used in a stepwise multiple regression analyses to determine the significant multivariate predictors of DD. The data used in the multiple regression model were found to meet the necessary assumptions to ensure robustness of the model. There were as many as 6 missing values, depending on the variable examined. Where appropriate, data are presented as means and standard deviations (SD). Statistical significance was set at p < 0.05.

This research was funded by a grant from the Colorado School of Public Health at Colorado State University. 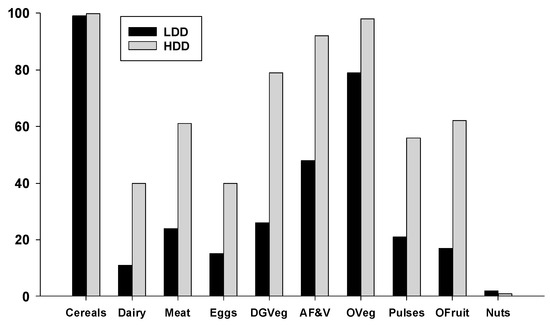 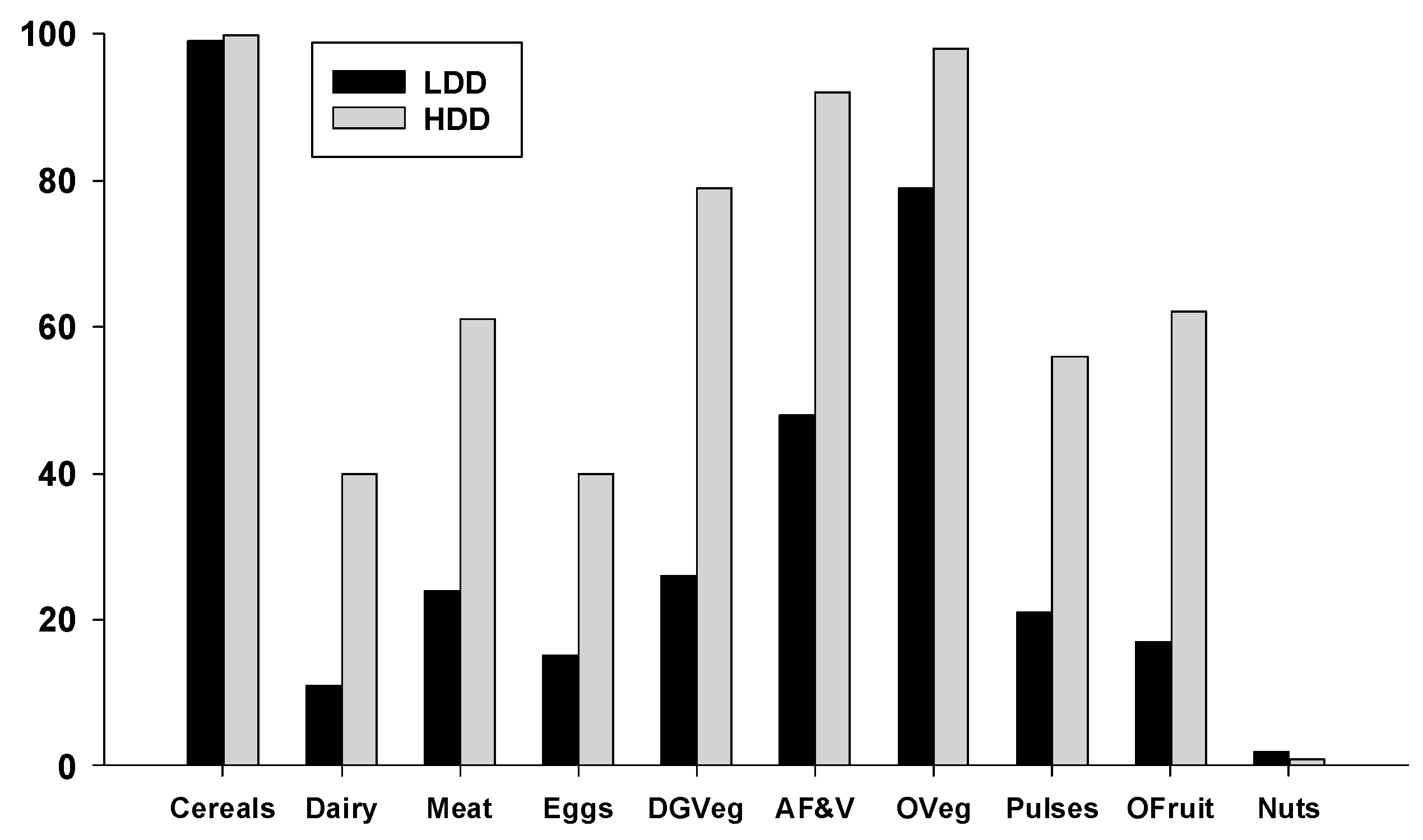 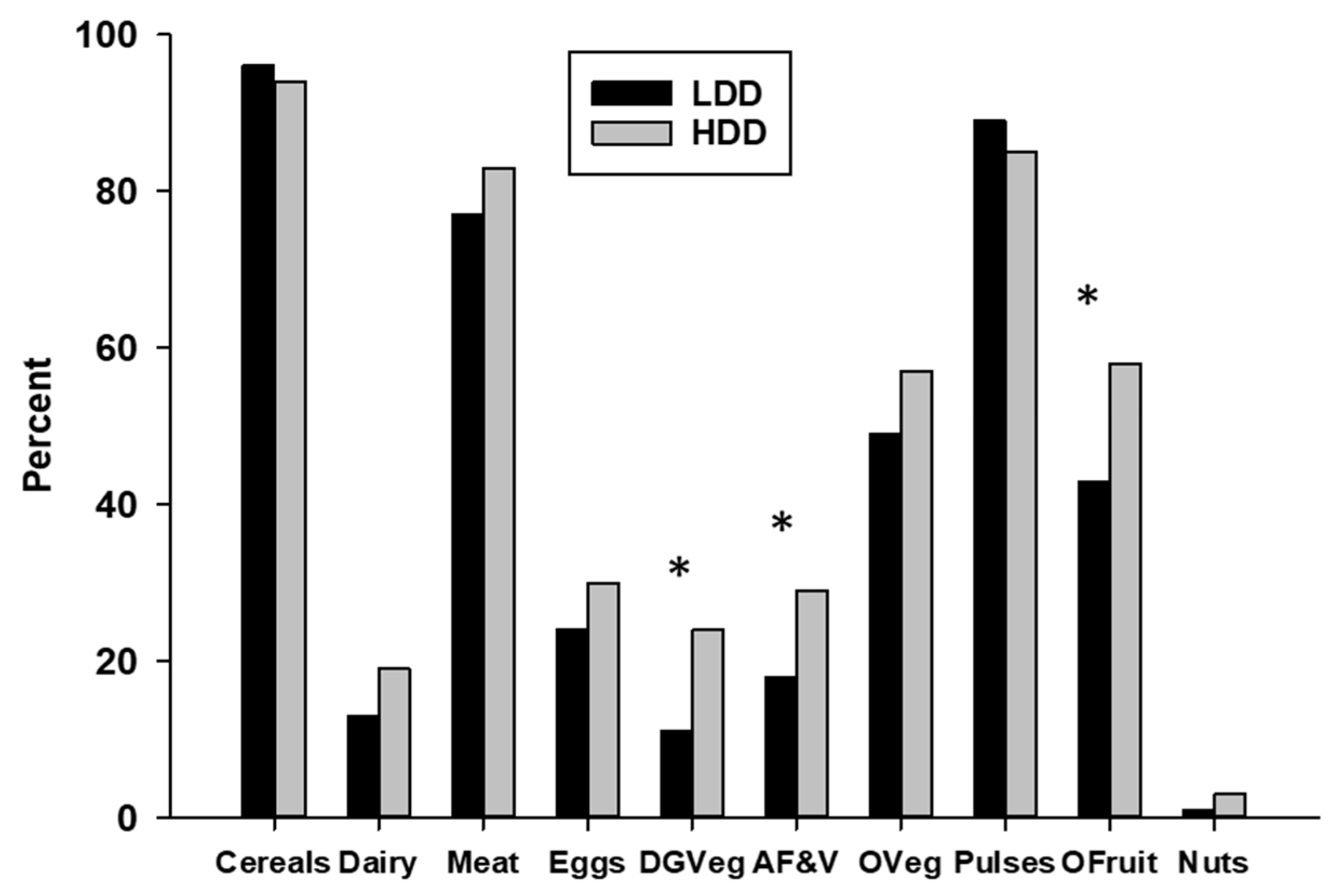