Alcohol Consumption and the Risk of Prostate Cancer: A Dose-Response Meta-Analysis

Prostate cancer (PCa) is the second most common cancer among men worldwide [1]. In 2018, worldwide, approximately 1.3 million individuals were diagnosed with PCa with an incidence rate of 29.3 cases per 100,000 persons per year, and 360,000 patients died of PCa with mortality rate of 7.6 deaths per 100,000 persons per year [2]. Yet, only a few risk factors for prostate cancer are considered established, including body fatness and adult attained height [3]. Alcohol is widely consumed and is known to be a major risk factor for several types of cancers, including oropharynx, larynx, esophagus, liver, colon, rectum, and breast cancer [4]. Yet interestingly, it is still under debate whether alcohol consumption is associated with the risk of PCa or not.
Associations between alcohol intake and PCa risk have been studied by various researchers. Several studies found positive associations [5,6,7], others found inverse associations [8,9], and some found no associations [10,11,12]. By alcohol type, liquor intake was positively associated with total PCa risk but wine and beer intakes were not in a cohort study [6]. On the contrary, a case-control study on total PCa found an inverse association with red wine intake but no association with beer and liquor intakes [13]. By PCa type, total alcohol intake was inversely associated with fatal PCa but not with advanced PCa in one study [14], while it was associated with a decreased risk of both aggressive and fatal PCa in another study [8].
With these inconsistent results, several meta-analyses have been conducted, including the latest one published in 2016 [15]. This latest meta-analysis suggested that alcohol intake adversely influences prostate cancer outcomes in a dose-response manner. However, the study did not explore the shape of the dose-response relationship and did not account for heterogeneity by types of alcoholic beverage and clinical heterogeneity of PCa. In addition, more studies were published thereafter, including a large cohort study based on 47,568 participants and 869 cases [9]. To provide further insights regarding the effect of alcohol intake on prostate carcinogenesis, we conducted linear and non-linear dose-response meta-analyses by types of alcoholic beverages (wine, beer, liquor) and PCa (non-aggressive, aggressive).

The meta-analysis of observational studies in epidemiology (MOOSE) checklist [16] was followed for the design, analysis, and reporting of this meta-analysis (Supplementary Table S3). Two authors (S.H. and N.K.) searched literatures, selected studies, and extracted data independently. Inconsistency between the two researchers was resolved through a discussion with other authors (D.H.L., H.K., and E.L.G.).

Based on detailed search terms (Supplementary Table S1), PubMed and Embase were searched for studies published up to April 2020. Only articles published in English were used, and no other restrictions were imposed. Abstracts and unpublished results were excluded. The reference lists of all the papers included in this analysis were also reviewed to check for any missed papers.

Cohort studies were included when investigating the relationship between alcohol consumption and prostate cancer risk and providing the following information: a quantitative measure of alcohol intake for at least 3 categories with the estimates of relative risks (RRs) (rate ratio or hazard ratio), 95% confidence interval (CI), category-specific or total number of cases, and category-specific or total number of either non-cases or person-years. For multiple articles base on a same cohort, we extracted non-overlapping data from each article, imposing priority to the more recent article. The process of study selection is summarized in Figure 1. After exclusion, a total of 11 studies were included in our meta-analysis, and study characteristics are presented in Supplementary Table S2.

From each study, the following information was extracted: multivariable-adjusted RR and corresponding 95% confidence interval in each category of alcohol consumption, category-specific range of alcohol consumption and unit, alcoholic beverage type (total, wine, beer, and liquor), PCa types (non-aggressive and aggressive) [17], category-specific or total number of cases, non-cases and person years, first author’s name, publication year, characteristics of study population (e.g., country, sex, age at enrollment), and variables adjusted for. Of note, alcohol intakes were reported in different units across the studies. They were converted to g/day of ethanol, which was used most frequently among studies included.

Alcohol intake was analyzed by types (wine, beer, and liquor) as well as total intake, to account for potential interaction between alcohol and other nutrients in alcoholic beverages and different behaviors of drinking. For PCa, because non-aggressive and aggressive PCa are considered etiologically heterogeneous diseases [17], we analyzed them separately. Non-aggressive PCa included cases with low-grade (Gleason < 7) or non-advanced stage (T0-2, N0, and M0) at diagnosis; aggressive PCa included cases with cases with high-grade (Gleason ≥ 7 or classification includes grades along with stage), advanced stage (T3+, N1+, M1, and/or PCa as cause of death) at diagnosis, and fatal (M1 and/or PCa as cause of death). Within each group of non-aggressive and aggressive PCa, when a cohort provided results for multiple subtypes, we prioritized the one with greater lethal potential (e.g., non-advanced stage over low-grade [18,19], advanced stage over high-grade [20], fatal over advanced [9,14]) to represent PCa of greater clinical importance [21]. Furthermore, because grade reflects the degree of cell differentiation while stage concerns degree of tumor progression, subgroups of PCa defined by grade, stage, and survival might have different natural history of disease [17]. Thus, we performed subgroup analyses by PCa subtypes within each non-aggressive and aggressive PCa.
For linear dose-response meta-analysis, summary RR per 14 g (alcohol content in one standard drink) [22] increase in alcohol intake and 95% CI were calculated based on the method described by Greenland and Longnecker [23]. First, study-specific RR and 95% CI were estimated using correlated RRs and 95% CIs extracted across categories of alcohol intake. In estimating the liner trend, several approximations were made: the midpoint of alcohol intake was assigned to the corresponding RR by calculating the mean of lower bound and upper bound of each category; the width of the highest category with no upper bound presented was assumed to be the same as the interval of the adjacent category. Second, we pooled the study-specific RR and 95% CI using the DerSimonian-Laird random effects model [24]. Potential heterogeneity in the relationship between alcohol risk and PCa risk across studies was tested by Cochran’s Q test [25] and quantified by I2, the percentage of total variation across studies that is attributable to true heterogeneity rather than to chance [26]. The presence of small study effects [27,28], such as publication bias, was checked by Egger’s test [29].
To examine potential non-linearity in the relationship between alcohol intake and PCa risk, we conducted non-linear dose-response meta-analysis based on the restricted cubic spline approach [30,31]. For each study, cubic splines were modeled with three knots fixed at 10%, 50%, and 90% percentiles of alcohol intake. The reference was set to 0 g/day of alcohol intake. Then, the derived curves were combined using multivariate random-effects meta-analysis [32]. Statistical significance of non-linearity was determined by testing the null hypothesis that the regression coefficient of the second spline transformation equals to 0.
In the meta-analyses by types of alcoholic beverage and PCa stage, differences in the number of available studies influence the statistical power of the summary estimates. To check the robustness of heterogeneity accounting for the number of studies, we conducted sensitivity analyses by repeating the aforementioned linear and non-linear dose-response meta-analysis among studies that provided the results for both non-aggressive and aggressive PCa.
For statistical significance, we set two-sided α as 0.05. All statistical analyses were performed using STATA 13 (StataCorp, College Station, TX, USA).

In this study, we found varied associations between alcohol intake and PCa by types of alcohol and PCa. Liquor may be associated with increased risk of any PCa over a wide range of intake. For wine, heavy intake may have a harmful effect on the risk of aggressive PCa. Beer might be modestly harmful for non-aggressive PCa but protective against aggressive PCa. Future studies are warranted to confirm our heterogeneous findings and to explain an inverse association between beer intake and aggressive PCa. Meanwhile, in view of the updated stance of the Dietary Guideline Advisory Committee of the United States that “at all levels of consumption, drinking less is generally better for health than drinking more” [54] it would be advisable to limit alcohol consumption to the minimum for overall health.

The first author S.H. and corresponding author N.K. searched literatures, selected studies, and extracted data independently. Inconsistency between the two researchers was resolved through a discussion with other authors (D.H.L., H.K. and E.L.G.). All authors have read and agreed to the published version of the manuscript.

The authors have declared no conflict of interest. 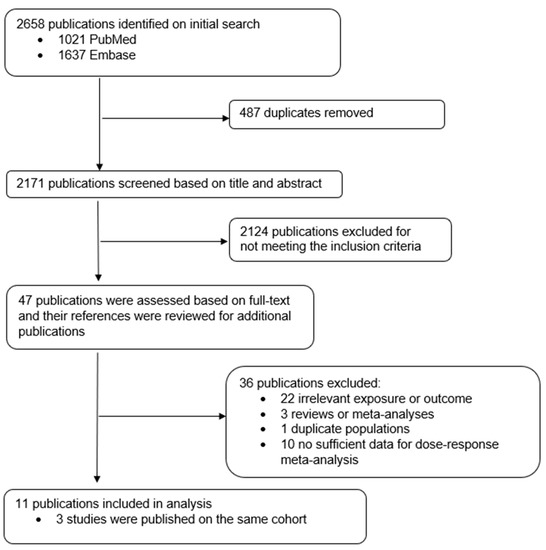 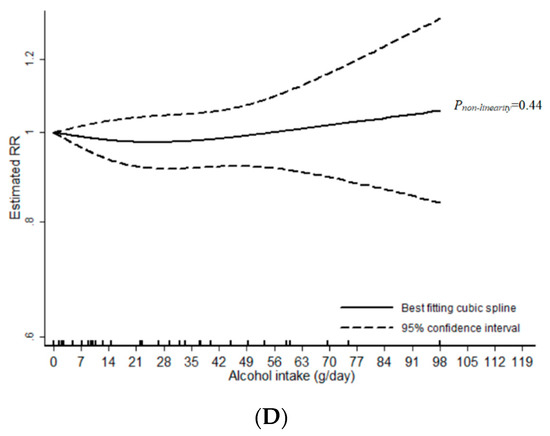 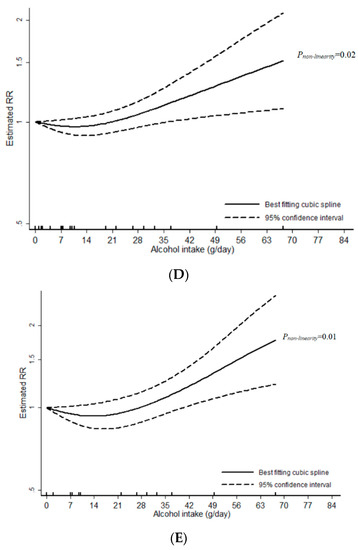 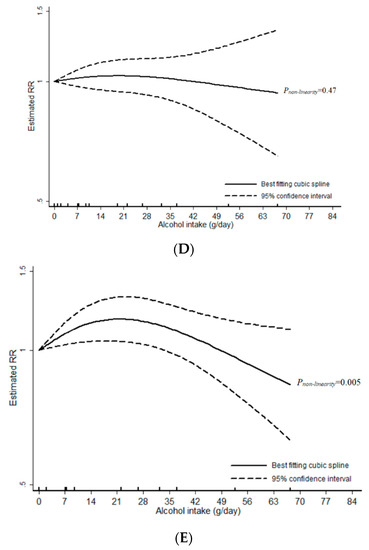