Streptococcus thermophilus: To Survive, or Not to Survive the Gastrointestinal Tract, That Is the Question!
Next Article in Special Issue

Eating Fast Is Associated with Nonalcoholic Fatty Liver Disease in Men But Not in Women with Type 2 Diabetes: A Cross-Sectional Study
Previous Article in Special Issue

Whole grains may assist in reducing risk of non-communicable disease, but consumption is limited in many countries. In Australia, the reasons for poor consumption are not well understood. The aim of this study was to investigate consumers’ knowledge, attitudes and identification of whole grains, incorporating an exploration of factors influencing consumption, promotion and provision. An online semi-structured questionnaire was used to gather responses from 735 participants (61% complete responses). Although 92% of respondents consumed grains, only 8% reported an intake consistent with age and gender recommendations. Refined pasta and rice were the most frequently purchased grain foods followed by wholemeal/whole grain bread. Of whole grain foods, bread and breakfast cereals were consumed more frequently. However, overall, participants did not prioritise consumption of whole grains. Despite this, 93% of participants had seen food packaging information drawing attention to whole grain content, with a high proportion describing whole grain as less processed (72%) or high in dietary fibre (67%). Two-thirds were aware of health benefits but stated that if they had further information, they would be more likely to swap to whole grain. Further education, increasing exposure, accessibility and extensive promotion of whole grain health benefits are required to facilitate whole grain consumption. Furthermore, removing the negative stigma associated with carbohydrate foods, including grains, will be necessary to improve consumption. View Full-Text
Keywords: whole grain; grains; fibre; health benefits; education; food labelling whole grain; grains; fibre; health benefits; education; food labelling
►▼ Show Figures 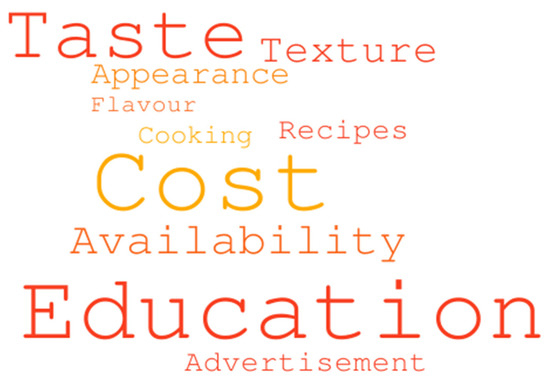