The Effects and Potential Mechanism of Oil Palm Phenolics in Cardiovascular Health: A Review on Current Evidence
Next Article in Special Issue

It is well known that white adipose tissue (WAT) is involved in the pathogenesis of age-related diseases including type 2 diabetes, atherosclerosis, and other cardiovascular and cerebrovascular diseases [1]. It has recently been shown that WAT quality, including adipocyte size, mitochondrial biogenesis, and adipokine expression profile, is a key player in lifespan regulation [2,3,4,5,6].
Caloric restriction (CR) is the most robust, reproducible, and simple experimental manipulation that is capable of improving whole body metabolism, delaying the onset of various age-related pathophysiological changes and extending both median and maximum lifespan in a wide range of organisms [7,8]. Dwarf rodents that demonstrate the suppression of growth hormone/insulin-like growth factor 1 (GH/IGF-1) signaling live longer than their wild-type (Wd) littermates [9]. Since CR suppresses GH/IGF-1 signaling, its beneficial effects are considered to be dependent on the suppression of GH/IGF-1 signaling [10]. However, CR further extends the lifespan of long-lived dwarf rodents that have GH/IGF-1 suppression [11,12]. Therefore, the beneficial effects of CR are also likely to be mediated through a GH/IGF-1-independent mechanism.
To identify the GH/IGF-1-independent mechanism involved in the effects of CR, we compared the gene expression profile of the WAT of long-living dwarf rats bearing an antisense GH transgene with that of Wd rats subjected to CR, and we found that CR upregulated the expression of genes involved in fatty acid (FA) biosynthesis in a GH/IGF-1-independent manner [13]. Sterol regulatory element binding protein-1 (SREBP-1), including its two isoforms, SREBP-1a and -1c, is a master transcriptional regulator of FA biosynthesis [14]. In WAT, SREBP-1c is predominantly expressed, rather than SREBP-1a [15]. Therefore, we applied CR to both Srebp-1c knockout (KO) and WT mice on a B6; 129S6 background and found that CR extended lifespan in Wd mice but not in KO mice. Moreover, CR upregulated the expression of proteins involved in FA biosynthesis and mitochondrial biogenesis in the WAT of Wd mice but not in KO mice. These findings were observed only in WAT but not in the other tissues, including liver, kidney, quadriceps femoris muscle, and heart [16]. Peroxisome proliferator-activated receptor γ coactivator-1α (PGC-1α) is a master transcriptional cofactor for mitochondrial biogenesis [17] and a key regulator of the CR-induced activation of mitochondrial biogenesis [18]. We also found that CR upregulates Pgc-1a mRNA in WAT of Wd mice but not in Srebp-1c KO mice. Moreover, a chromatin immunoprecipitation assay showed that SREBP-1 protein binds to the promoter region of the Pgc-1a gene, as well as the Fasn gene, in mouse embryonic fibroblasts (MEFs) derived from WT mice but not in those from KO mice. Therefore, we suggested that CR upregulates FA biosynthesis and mitochondrial biogenesis via SREBP-1c in WAT [16].
Fibroblast growth factor 21 (FGF21), which was initially identified as a hepatokine, is mostly secreted by the liver [19]. Circulating FGF21 binds to the FGF receptor (FGFR) and β-klotho (KLB) receptor complex in target tissues such as WAT. The binding of FGF21 to its receptors activates downstream signaling, including extracellular signal-regulated kinase (ERK) signaling, which upregulates the expression of genes involved in glucose and lipid metabolism [20,21,22]. FGF21 expression is negatively regulated by SREBP-1c in hepatocytes [23]. In contrast, FGF21 expression is upregulated by SREBP-1c in WAT and 3T3-L1 adipocytes [24]. FGF21 induces PGC-1α expression in the liver as an adaptation to starvation [25]. In WAT, FGF21 positively regulates PGC-1α and PPARγ expression and/or activity via feed-forward autocrine/paracrine loops [26,27]. Moreover, Fgf21 Tg mice live longer than Wd mice and have a similar metabolic phenotype to CR mice [28]. We have also shown that the CR-associated upregulation of PGC-1α expression is partially mediated through FGF21 in WAT [29]. CR also upregulates PPARγ expression in WAT [29]. In addition, the expression of PGC-1α is increased as a result of rosiglitazone-induced PPARγ activity in WAT [30].
Leptin, which was the first substance to be identified as an adipokine, is mostly secreted by adipocytes [31]. Circulating leptin binds to the leptin receptor, which is predominantly expressed in the arcuate nucleus of the hypothalamus and reduces appetite and increases energy expenditure via the sympathetic nervous system [32]. However, the leptin receptor is also expressed in other cell types, including adipocytes [33]. It has been reported that leptin treatment downregulates the expression of SREBP-1 and its downstream targets in mouse WAT [34]. In addition, CR reduces leptin secretion by adipocytes, thereby reducing the circulating leptin concentration [35]. These findings raised the possibility that CR might suppress leptin signaling via an autocrine/paracrine loop, leading to the SREBP-1-induced upregulation of proteins involved in FA biosynthesis in WAT.
As stated above, the molecular mechanisms of CR-associated metabolic remodeling, including FA biosynthesis and mitochondrial biogenesis, are unclear. In particular, the reciprocal regulatory mechanism that involves SREBP-1, FGF21, and PGC-1α is complex. In the present study, we aimed to clarify this molecular mechanism, focusing on the expression of the master regulators of FA biosynthesis and mitochondrial biogenesis, SREBP-1 and PGC-1α, respectively, in adipocytes. To this end, we analyzed the regulation of leptin signaling, SREBP-1c, FGF21, and PGC-1α in the CR-associated metabolic remodeling of WAT and adipocytes.

2.1. Animals and the Collection of Mice Embryonic Fibroblasts (MEFs)

All animal experiments were approved by the Animal Experimentation Committees of Tokyo University of Science (Y17051, Y18060, Y19056) or the University of Tsukuba (19–274). We back-crossed Srebp-1c KO mice on a B6;129S6 background (B6; 129S6-Srebf1tm1Mbr/J; Jackson Laboratory, Bar Harbor, ME, USA) and C57Bl/6J mice (CLEA Japan, Tokyo, Japan) to obtained Srebp-1c KO mice on a C57Bl/6 background. All the animals were maintained under specific pathogen-free conditions. At 3 months of age, Wd and Srebp-1c KO mice were allocated to two groups: an ad libitum-fed (AL) and a CR (70% of the energy intake of AL) group. At 10 months of age, four groups of mice (WdAL, WdCR, KOAL, and KOCR) were provided with food 0.5–1 h prior to turning off the lights in the evening, then they were euthanized under isoflurane anesthesia (Mylan, Canonsburg, PA, USA) 2–3 h later, after which WAT was harvested. The time-course measurement of food intake of the Wd and KO mice that were fed AL, and the body weights of the four groups, are shown in Figure S1.
MEFs were obtained from Srebp-1c KO and Wd mice, and Fgf21 KO and Wd mice on a C57Bl/6 background [36], as previously reported [16]. Briefly, 13–15-day old embryos (E13–15) were collected from pregnant mice of each KO line, minced and trypsinized. MEFs were separated by passing the tryptic digests through a cell strainer.

3T3-L1 preadipocytes were purchased from the Japanese Collection of Research Bioresources (JCRB) cell bank (Osaka, Japan) and maintained in Dulbecco’s modified Eagle’s medium (DMEM) containing a low glucose concentration (Wako, Osaka, Japan), 10% fetal bovine serum (FBS) (Thermo Fisher Scientific, Waltham, MA USA), and 1% penicillin/streptomycin (P/S) (Sigma-Aldrich, MO, USA). MEFs were maintained in DMEM containing a high glucose concentration (Wako), 10% FBS, 1% P/S, and 0.1 μM 2-mercaptoethanol (Sigma). The differentiation of 3T3-L1 preadipocytes or MEFs to mature adipocytes was achieved by using our previous published protocol [37]. In the present study, 3T3-L1 cells or MEFs were used as mature adipocytes 8–12 or 16 days after the induction of differentiation, respectively. PD1730741 (Funakoshi, Tokyo, Japan) was dissolved in DMSO to make a 5 mM solution, and then it was diluted in PBS. Differentiated 3T3-L1 cells (day 7) were treated with 50 nM PD1730741 for 24 h and then collected.

Retrovirus vectors were generated as reported previously [16]. Briefly, each pMXs-AMNN-Puro plasmid or pMXs-puro-shLeptinR plasmid was transfected into Plat-E cells (kindly provided by T. Kitamura, University of Tokyo, Japan) using the calcium phosphate method. To obtain each overexpressing or shLeptinR-expressing 3T3-L1 cell line, the supernatant from each virus-containing culture was collected after 3 days. The 3T3-L1 cells were infected by incubation in the collected virus-containing supernatant for 2 days, followed by treatment with 2 μg/mL puromycin for a further 5 days. The 3T3-L1 cells overexpressing empty vectors or expressing shRNA targeting GFP (shGFP) were used as control cells.

RNA was extracted from WAT and other cell types using ISOGENII (Nippon Gene, Tokyo, Japan). The purified RNA was reverse transcribed using ReverTra Ace® qPCR RT Master Mix (Toyobo) and the cDNAs were then amplified using a CFX Connect™ Real-time System, Thunderbird SYBR qPCR mix, and the primers for each gene. These procedures were performed according to the manufacturer’s protocol. Since the intrinsic expression of Srebp-1c mRNA was very low in 3T3-L1 adipocytes, RT-PCR was not possible. Therefore, we performed conventional PCR and agarose gel electrophoresis of the PCR products, followed by ethidium bromide staining. Fluorescence of the ethidium bromide was visualized using an LAS3000 (Fujifilm, Tokyo, Japan) and data were analyzed using Multigauge software (Fujifilm). Target gene expression data were normalized to Rps18 expression (n = 4). The primer pair sequences are shown in Table 1.

3.1. Role of SREBP-1c in the Effects of CR on Gene Expression in WAT

We have reported previously that CR increases the expression of Srebp-1c, Srebp-1a, and Pgc-1a mRNAs in the WAT of Wd B6;129S6 mice but not in KO mice [16]. In the WAT of mice on a C57Bl/6 background, CR also increased the expression of Srebp-1c, Pgc-1a, and Fgf21 mRNAs in Wd mice but not in KO mice (Figure 1A or Figure 1C,D). Similar findings about the CR-associated upregulation of Fgf21 mRNA were observed in B6;129S6 mice (Figure S2). However, in contrast to mice on a B6;129S6 background, CR did not upregulate the expression of Srebp-1a mRNA in either Wd or KO mice on a C57Bl/6 background (Figure 1B). Overall, it is likely that the CR-associated upregulation of these factors is less exaggerated in C57bl/6 mice compared with B6;129S6 mice.

3.2. Effects of SREBP-1c on the Expression of Genes and Proteins Involved in FA Biosynthesis and Mitochondrial Biogenesis

3.3. Roles of FGF21 and PGC-1α in Mitochondrial Biogenesis

3.4. Effect of Leptin Signaling on the Expression of Genes and Proteins Involved in FA Biosynthesis and Mitochondrial Biogenesis

The following is available online at https://www.mdpi.com/2072-6643/12/7/2054/s1, Figure S1: Food intake and body weight in Srebp-1c KO and Wd mice fed AL and subjected to CR. Figure S2: The effects of Srebp-1c KO on Fgf21 expression in the WAT of mice on a C57Bl/6-129S6 background. Figure S3: The effects of SREBP-1a overexpression on the expression of genes and proteins involved in FA biosynthesis and mitochondrial biogenesis in mature 3T3-L1 adipocytes.

This work was supported by Grants-in-Aid for Scientific Research (B) (No. 17H02179) from the Japan Society for the Promotion of Science.

We thank Mark Cleasby, from Edanz Group (https://en-author-services.edanzgroup.com/) for editing a draft of this manuscript. 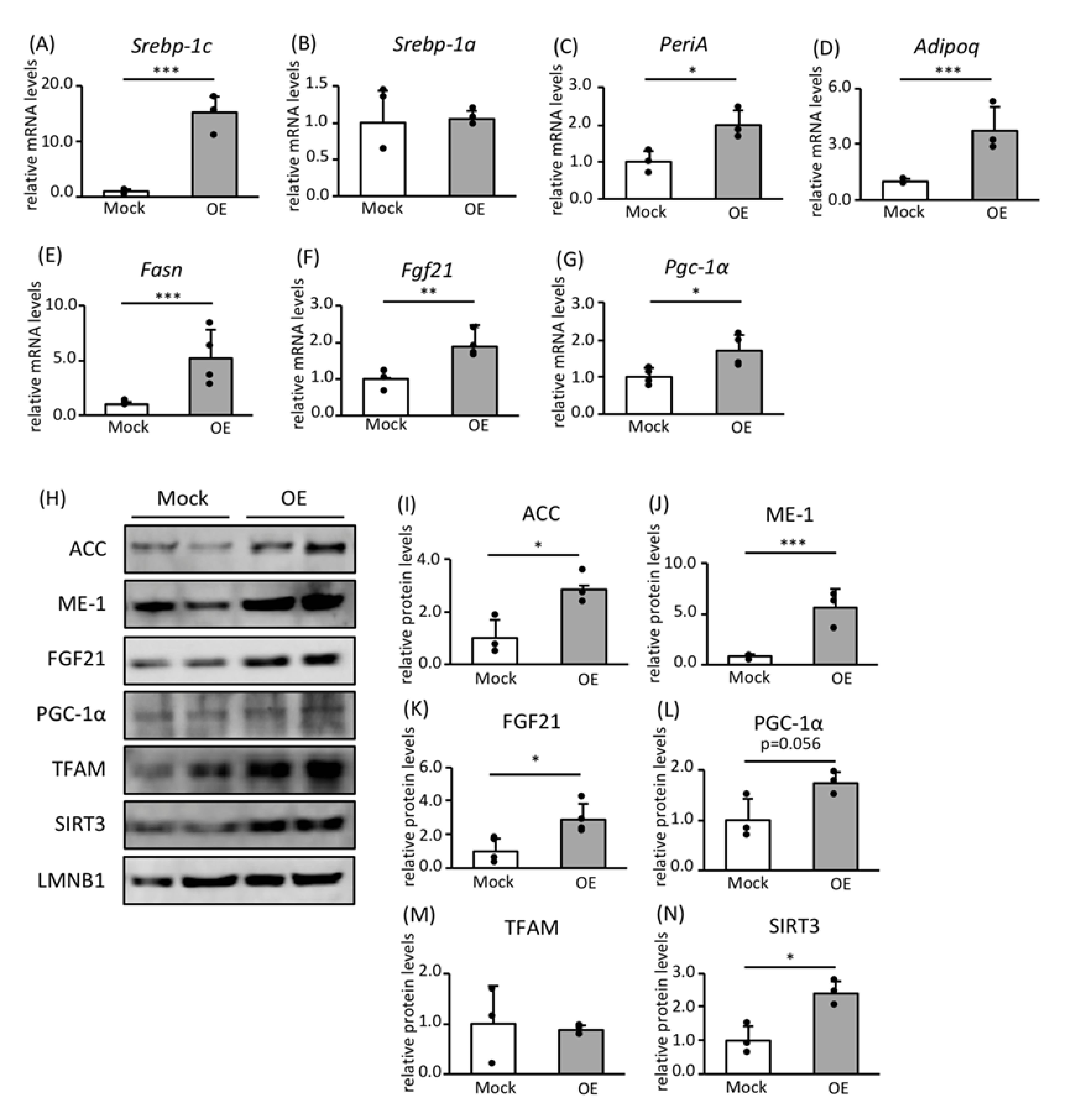 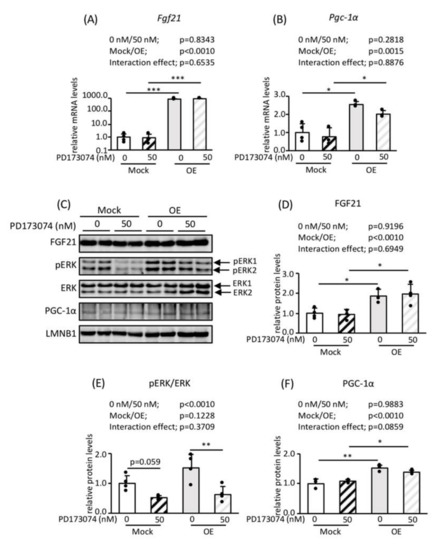 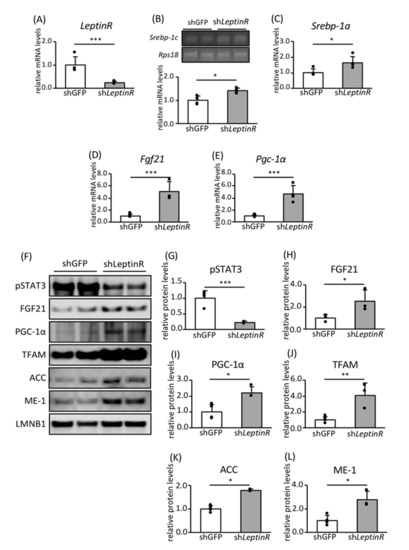 Table 1. List of primers for RT-PCR.
Table 1. List of primers for RT-PCR.
© 2020 by the authors. Licensee MDPI, Basel, Switzerland. This article is an open access article distributed under the terms and conditions of the Creative Commons Attribution (CC BY) license (http://creativecommons.org/licenses/by/4.0/).
We use cookies on our website to ensure you get the best experience. Read more about our cookies here.
Accept
We have just recently launched a new version of our website. Help us to further improve by taking part in this short 5 minute survey here. here.
Never show this again