L-Theanine Reduced the Development of Knee Osteoarthritis in Rats via Its Anti-Inflammation and Anti-Matrix Degradation Actions: In Vivo and In Vitro Study
Previous Article in Special Issue

Although some probiotic bacteria have been reported to prevent infections in children, there are few well-designed double-blind studies. Here we evaluated the effects of a probiotic strain of lactic acid bacteria (LAB), Pediococcus acidilactici K15, on viral respiratory tract infections in preschool children. A four-month, randomized, double-blind, placebo-controlled study was performed in 172 healthy children aged 3 to 6 years. Subjects were administered dextrin alone or dextrin including heat-killed K15 (5 × 1010 bacteria). The number of febrile days was the primary outcome. The number of absent days from preschools and the influenza incidence were secondary outcomes. Secretory IgA (sIgA) concentrations in saliva were measured as an exploratory outcome. The primary and secondary outcomes were not significantly different between both groups. Analyses in children with little intake of fermented foods including LAB showed that the duration of a fever significantly decreased by K15 intake. The salivary sIgA level in the K15 group was maintained significantly higher than it was in the placebo group. The effects of K15 on preventing viral respiratory tract infections were not observed without the restriction of fermented foods intake. However, K15 supported anti-infectious immune systems in children who took less fermented foods and the maintenance of salivary sIgA levels in all subjects. View Full-Text
Keywords: Pediococcus acidilactici K15; double-blind study; preschool children; respiratory tract infections; secretory IgA; febrile days; safety Pediococcus acidilactici K15; double-blind study; preschool children; respiratory tract infections; secretory IgA; febrile days; safety
►▼ Show Figures 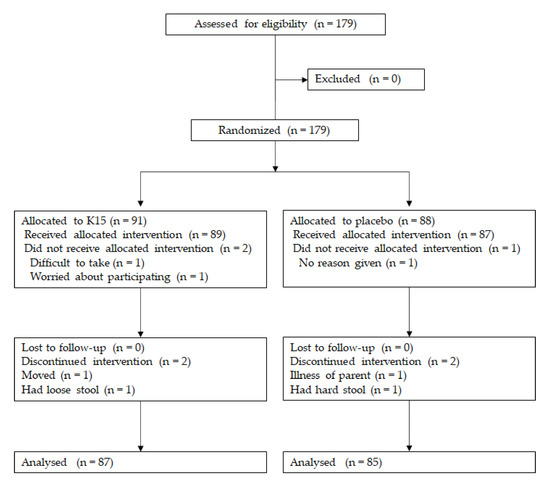