Strategies to Improve Health Communication: Can Health Professionals Be Heroes?
Next Article in Special Issue

The Effect of an Online Sugar Fact Intervention: Change of Mothers with Young Children
Previous Article in Special Issue

The Effect of Caffeine on the Risk and Progression of Parkinson’s Disease: A Meta-Analysis

Coffee and caffeine are speculated to be associated with the reduced risk of Parkinson’s disease (PD). The present study aimed to investigate the disease-modifying potential of caffeine on PD, either for healthy people or patients, through a meta-analysis. The electronic databases were searched using terms related to PD and coffee and caffeinated food products. Articles were included only upon fulfillment of clear diagnostic criteria for PD and details regarding their caffeine content. Reference lists of relevant articles were reviewed to identify eligible studies not shortlisted using these terms. In total, the present study enrolled 13 studies, nine were categorized into a healthy cohort and the rest into a PD cohort. The individuals in the healthy cohort with regular caffeine consumption had a significantly lower risk of PD during follow-up evaluation (hazard ratio (HR) = 0.797, 95% CI = 0.748–0.849, p < 0.001). The outcomes of disease progression in PD cohorts included dyskinesia, motor fluctuation, symptom onset, and levodopa initiation. Individuals consuming caffeine presented a significantly lower rate of PD progression (HR = 0.834, 95% CI = 0.707–0.984, p = 0.03). In conclusion, caffeine modified disease risk and progression in PD, among both healthy individuals or those with PD. Potential biological benefits, such as those obtained from adenosine 2A receptor antagonism, may require further investigation for designing new drugs.
Keywords: caffeine; Parkinson’s disease; risk; progression; meta-analysis caffeine; Parkinson’s disease; risk; progression; meta-analysis

Parkinson’s disease (PD) is one of the most common neurodegenerative diseases, second only to Alzheimer’s disease (AD). Risk factors for PD include genetic mutations, environmental toxins, and lifestyle [1]. An epidemiological study reported some protective factors for PD worldwide, such as female sex, physical activity, and smoking [2]. The consumption of coffee or caffeinated food is associated with the reduction of the risk of PD. Patients with PD are less frequent habitual consumers of caffeinated food [3,4]. The consumption of either tea or coffee exhibited similar effects on the reduction of the risk of PD [5]. In a similar manner, the protective effect of coffee was also noted in dementia and AD [6], whereby caffeine reversed the cognitive impairment and decreased the amyloid burden in transgenic AD mice model [7].
Caffeine is an adenosine A2A receptor antagonist [8]. Different types of adenosine receptors (A1, A2A, A2B, and A3) are widely distributed in the brain. Adenosine A2A receptors are coupled with G-proteins and exclusively expressed in dopaminergic neurons. The activation of adenosine A2A receptors causes an increase in intracellular cAMP levels and the extracellular release of glutamate, resulting in neural excitotoxicity [9]. The neuroprotective effects of caffeine involved the antagonism of the adenosine A2A receptor, down-regulating the down streaming phosphatidylinositol 3-kinase (PI3K)/protein kinase B (AKT) signaling pathway, and avoiding excessive calcium releasing-related neurotoxicity and neuroinflammation [10], which has been experimentally demonstrated in several in vivo models of PD [11,12,13,14].
Whether caffeine can reduce the risk and halt the progression of PD remains unclear. In large-scale cohort studies, caffeine consumption was inconsistently associated with a low risk of PD during follow-up [15,16,17,18]. However, among patients diagnosed with PD, the administration of caffeine tablets did not modify the disease course [19]. Furthermore, caffeine metabolism varies among patients with PD [20], thus potentially resulting in inconsistent protective effects. This study investigated the association between caffeine and PD progression. Considering disease progression was the primary temporal outcome, only cohort studies rather than case–control studies were included herein, because case–control studies cannot delineate this temporal association.

All relevant articles published in English between 1 January 1990, and 31 December 2019 were identified by searching PubMed, BioMed Central, Medline, and Google Scholar. Details regarding search terms are provided in supplementary data. Moreover, the reference lists of relevant articles were reviewed to identify eligible studies not derived using these search terms.

2.2. Inclusion and Exclusion of the Literature

Inclusion criteria were as follows: (1) clear definition of PD diagnosis; (2) clear definition regarding the quantity of caffeine, coffee, or tea consumption; (3) cohort study published as an original article, case series, or letter to the editor; (4) sample size of ≥50 individuals; and (5) published in English. After excluding nonqualified studies, 19 studies were entered the full-article assessment process and another 6 studies were excluded due to the lack of hazard ratio. Finally, 13 studies were included into qualitative synthesis. We further segregated the remaining 13 studies into two categories: the healthy cohort including studies (n = 9) that recruited individuals without previous diagnosis of PD, wherein PD diagnosis was performed during follow-up evaluation, and the PD cohort including studies (n = 4) on individuals with PD already presenting motor symptoms, wherein PD progression was monitored. The selection process is illustrated in Figure 1.

The following data were extracted: name of the first author; year of publication; country and location; study design; the original cohort or clinical trial; the starting time of cohort; diagnostic criteria for PD; the assessment of caffeine consumption; the amount of coffee or caffeine consumption; mean follow-up period of time; the outcome assessment time; and the outcome of the PD progression. All data were independently reviewed by three investigators (BAI CH, Hong CT, and Chan L), and conflicts were resolved through a consensus. Assessing of quality of all studies were done by three investigators (BAI CH, Hong CT, and Chan L) based on the Newcastle–Ottawa Scale. The study was recommended (>7) by at least 2 investigators into this study as candidate. Data from these 13 candidate studies were independently extracted by two investigators (BAI CH and FAN YC).

The hazard ratio (HR) was determined, and 95% CIs were calculated on the basis of a binomial assumption. I2 was used to assess heterogeneity across studies. All statistical analyses were performed using SAS software (version 9.3; Statistical Analysis System, SAS.com, USA). All reported probability (p) values were two-sided, with p < 0.05 considered statistically significant.

The present study was a meta-analysis and all the studies enrolled into analysis can be found through the provided searching strategy.

Among the nine studies included in the healthy cohort (Table 1) [15,16,17,18,21,22,23,24,25], five were conducted in the United States, three in Scandinavia, and one in Singapore. Some studies were large-scale, long-term, population-based epidemiological cohort studies, and the others were specific for individuals with certain characteristics (nurses, healthcare professions, twins, and ancestry of migrants). Caffeine consumption was evaluated using questionnaires, either detailed and comprehensive or simple ones. Five of them investigated overall dietary habits, including coffee, tea, cola, and chocolate consumption, by using the transforming formula. The rest of them only recorded the daily consumption of coffee or tea. PD was diagnosed through either self-report and confirmation of medical records or from the national health care database. Two studies separately reported the results for men and women, and another study reported data only for women.
Most of the included studies categorized caffeine consumption as degree 4–5 based on the amount of caffeine or the number of cups of coffee per day. Only one study simply provided options of “yes” and “no” with regard to regular coffee consumption. Considering the difficulty in transforming the actual caffeine consumption among studies, this study considered results of all individuals consuming coffee at all degrees and considered the no-exposure group as a reference group to determine the HR. Overall, 43 results extracted from nine studies were analyzed herein. Caffeine consumption was significantly associated with a lower risk of developing remarkable symptoms for the diagnosis of PD during the follow-up period of time (HR = 0.797, 95% CI: 0.748–0.849, p < 0.001; Figure 2).
This study analyzed the effect of caffeine on patients with PD (Table 2). [26,27,28,29] Among the four studies in the PD cohort, three were conducted in European countries and one in the United States. Patients with PD were in the early stage of the disease. Similar to the healthy cohort, levels of caffeine consumption were assessed through either comprehensive questionnaires or simple questions. The four studies set different parameters for PD progression, including the initiation of levodopa, levodopa-induced motor complications, and the transition to Hoehn and Yahr stage III. The average follow-up duration ranged 4 to 10.3 years. Finally, 10 results were extracted from these 4 studies. Caffeine composition among patients at an early stage of PD significantly decelerated PD progression (HR = 0.834, 95% CI = 0.707–0.984, p = 0.03; Figure 3).

The author(s) received no financial support for the research, authorship, and/or publication of this article.

We appreciated YC Fan for the help in data extraction and Shennie Tan and Yanie Tan for the proofreading and English editing. 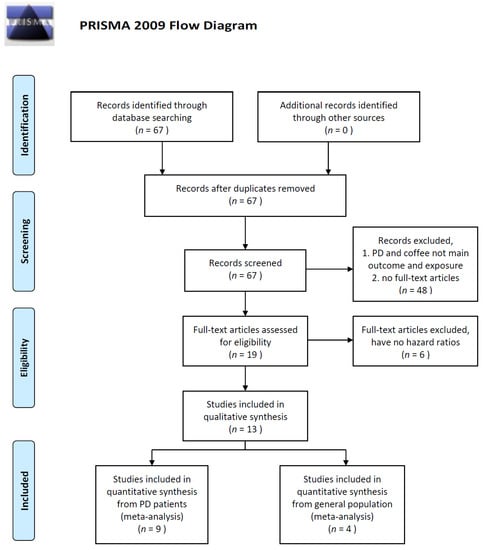 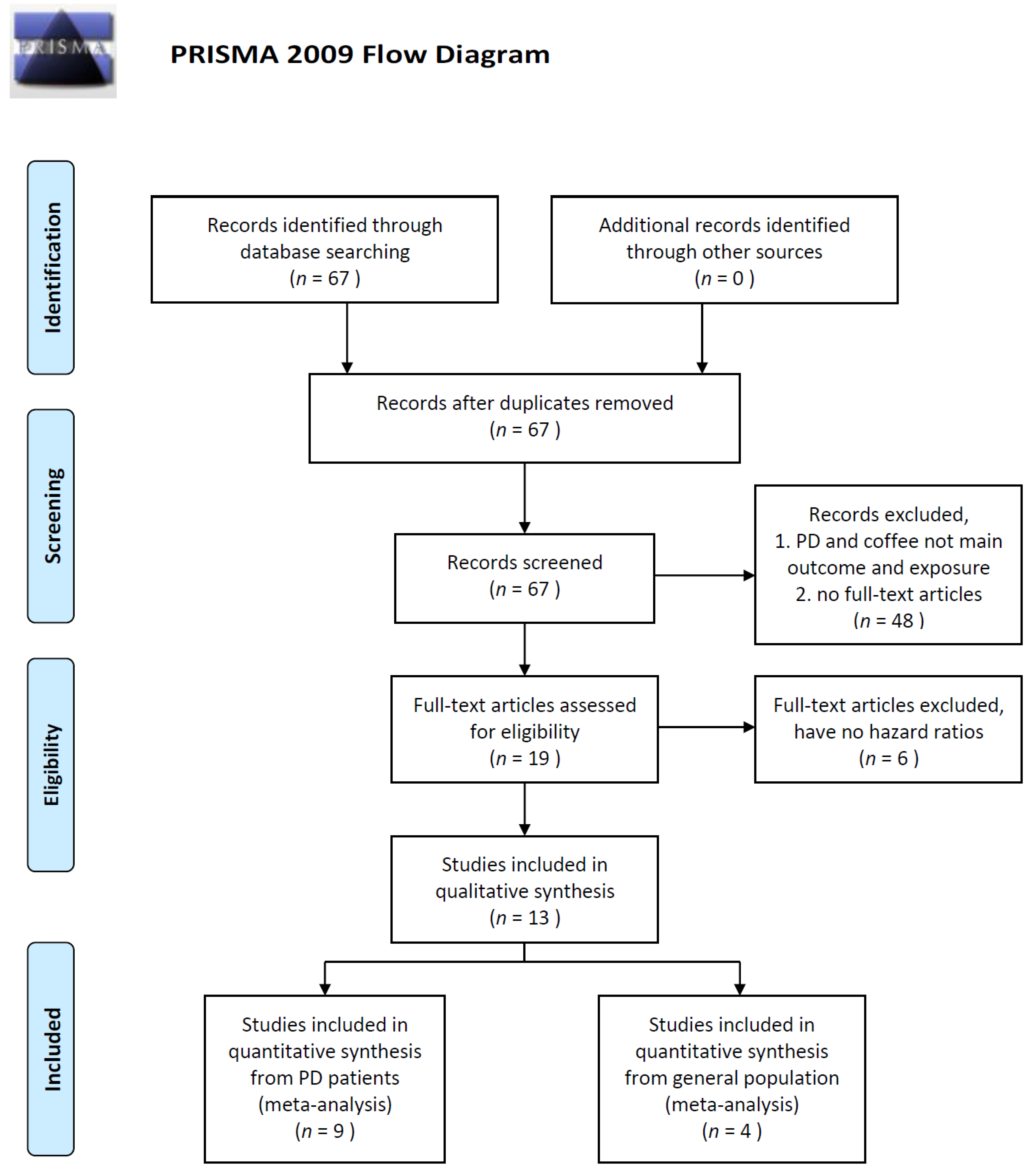 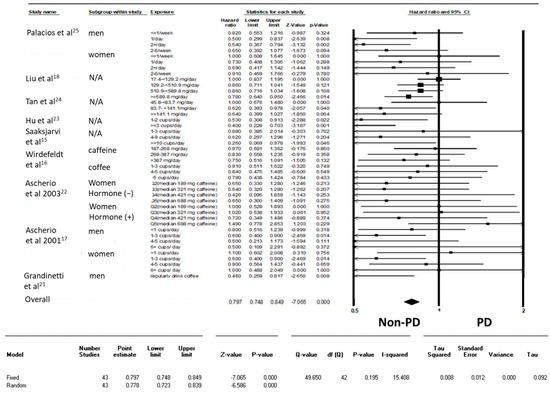 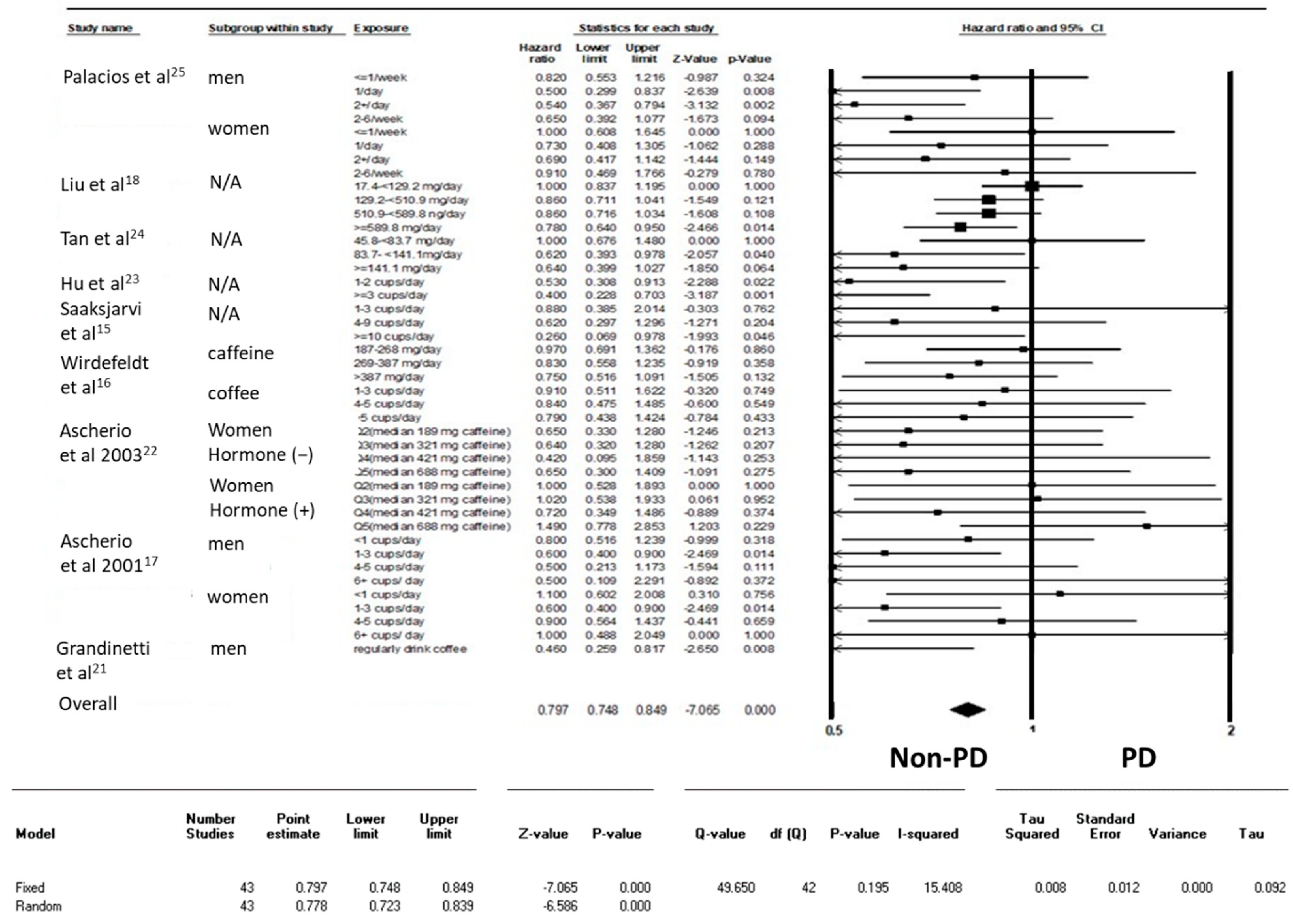