The Role of Iron in Brain Development: A Systematic Review
Previous Article in Journal

Maternal nutrition plays a crucial role in the offspring’s brain development during pregnancy and during a critical period after birth. Initial studies on perinatal programming have shown that malnutrition during pregnancy and/or lactation induces metabolic disorders such as hyperphagia, adiposity, hyperlipidemia and glucose intolerance in offspring, even into adulthood [1,2,3,4]. Moreover, growing evidence has revealed a modulation of the offspring behavior related to depression, anxiety-like behaviors and addiction (preference of hypercaloric foods and drugs) due to the consumption of a hypercaloric diet in the perinatal period, being associated with long-term structural and functional alterations in the neurodevelopment of the prefrontal cortex (PFC) [5,6,7,8].
Behavioral disorders related to chronic stress/insults are associated with changes in glutamatergic and GABAergic neurotransmission in the hippocampus and prefrontal cortex [9,10,11]. The adequate modulation of these neurotransmitters is essential for the adaptive behavioral response. During stressful experiences, including nutritional insult, there is neuroplasticity of glutamatergic signaling in the brain areas involved in stress response. An excessive glutamate activity and/or lack of gamma-aminobutyric acid (GABA) can generate negative associative memories, being associated with depression and anxiety [12,13,14].
A fatty diet can be considered a stressor affecting central neurotransmission, especially in areas directly related to metabolic control, such as the hypothalamus or the hippocampus, but also in areas that control eating behavior, such as the prefrontal cortex [15]. A high-fat diet during the perinatal period affects the cognitive functions of the offspring at different stages of age, and may be attributed to neurochemical changes in the hippocampus and PFC [16].
There are a set of homeostatic processes that control the release of neurotransmitters after neuronal activation; the most highly characterized is the endocannabinoid system (ECS), comprising the endogenous lipids anandamide (AEA, arachidonoylethanolamide) and 2-arachidonoylglycerol (2-AG), their target cannabinoid (CB) receptors CB1 and CB2, and their synthetic and catabolic enzymes. ECS is a retrograde neuromodulatory system of the major excitatory (glutamatergic) and inhibitory (GABAergic) synapses in the brain. Endogenous cannabinoids are released postsynaptically, and bind to presynaptic cannabinoid receptors, thus inhibiting the release of glutamate or GABA [17,18]. It is known that in the face of acute stress, the levels of the endocannabinoid 2-arachidonyl glycerol (2-AG) increase in involved brain areas such as the hippocampus and PFC [19].
ECS develops during prenatal and early postnatal life, in humans and animals, in the PFC. ECS is highly concentrated at interneuron synapses, playing a critical role in the developmental trajectory of GABAergic interneurons [20,21,22]. In addition, several studies have demonstrated that the ECS is altered in different brain areas of the offspring born from mothers with a caloric restriction or a hypercaloric diet during the perinatal period [3,23,24].
Since anxiety disorders have been related to regional dysregulation of excitatory/inhibitory neurotransmission pathways, we investigated the possible implication of glutamatergic and GABAergic signaling in the anxiogenic action of the perinatal and/or postnatal palatable diets, in the PFC of the male and female offspring in adulthood. Given the modulatory role of the ECS in glutamatergic and GABAergic neurotransmission during development, we hypothesized that the expression of the main elements of this homeostatic system are also altered in the adult offspring’s PFC by the perinatal and/or postnatal exposure to a palatable diet.
With this aim, we analyze the expression of the receptors and the enzymes of synthesis and degradation of the endocannabinoids, as well as the expression of the main glutamatergic and GABAergic receptors in the PFC of the offspring in the adult state, after a perinatal and/or postnatal hypercaloric diet.

Animal experimentation was carried out according to the recommendations of the European Communities Directive 2010/63/EU and Spanish legislation (Real Decreto 53/2013, BOE 34/11370-11421, 2013) regulating the care and use of laboratory animals. The protocol was approved by the Animal Ethics Committee of the Complutense University of Madrid (PSI-2012-35388; January 2012).

Control rats were given free access to standard chow (SAFE A04, Panlab, Barcelona, Spain). The free-choice diet rats were allowed to choose between standard chow (C) and a free-choice palatable diet (P) containing a mixture of chocolates (cafeteria diet) composed of Mars®, Snickers®, Bounty® and Milka® in equal proportions [25]. The water and both diets were administered ad lubitum and their composition is shown in Table 1.

The adult offspring were sacrificed at postnatal weeks 21–23, by decapitation after the administration of Equitesin® (3 mg kg−1). Sacrifices were made in an isolated room two hours after the start of the dark phase. Brains were frozen and stored at –80 °C (n = 5–6; 1 rat per litter was randomly selected). The prefrontal cortex (PFC) was dissected from Bregma 4.70 mm to 2.20 mm with fine surgical instruments [27]. Brain samples were weighed and stored at −80 °C until they were used for mRNA and protein analysis.

Western blotting was performed as described previously [29]. Briefly, prefrontal cortex (n = 4; 1 rat per litter were randomly selected) were homogenized in 500 μL of ice-cold lysis buffer containing Triton X-100, 1 M 4-(2-hydroxyethyl)-1-piperazineethanesulfonic acid (HEPES), 0.1 M ethylenediaminetetraacetic acid (EDTA), sodium pyrophosphate, sodium fluoride (NaF), sodium orthovanadate (NaOV) and protease inhibitors using a tissue-lyser system (Qiagen). After centrifuging at 26,000× g for 30 min at 4 °C, the supernatant was transferred to a new tube. Bradford method was used to measure the protein concentration of the samples. A quantity of 30 μg of each total protein sample was separated on 4–12% polyacrylamide gradient gels. The gels were then transferred onto nitrocellulose membranes (Bio-Rad Laboratories, Hercules, CA, USA) and stained with Ponceau red, Membranes were blocked in TBS-T (50 mM Tris-HCl pH 7.6, 200 mM NaCl, and 0.1% Tween 20) with 2% albumin fraction V from bovine serum (BSA, Roche, Mannheim, Germany) for 1 h at room temperature. The primary antibodies to the proteins of interest (Table 3) were incubated overnight at 4 °C. Mouse βactin was used as the reference protein. After several washes in TBS containing 1% Tween 20, an HRP-conjugated anti-rabbit or anti-mouse IgG (H+L) secondary antibody (Promega, Madison, WI, USA), diluted 1:10,000, was added followed by incubation for 1 h at room temperature. After extensive washing in TBS-T, the membranes were incubated for 1 min with the Western Blotting Luminol Reagent kit (Santa Cruz Biotechnology, Santa Cruz, CA, USA), and the specific protein bands were visualized and quantified by chemiluminescence using a ChemiDocTM MP Imaging System (Bio-Rad, Barcelona, Spain). The results are expressed as the target protein/ βactin ratios.

At week 7–8 postnatal, anxiety-related behaviors were evaluated in the offspring using the open field and elevated plus maze tests.
The elevated plus-maze (Panlab, Barcelona, Spain) is a cross-shaped platform elevated 65 cm from the floor with two opposing open arms (50 × 10 cm) and two closed arms (50-cm high opaque walls). A central area of 10 cm2 connected four arms. The light intensity was set at 150 lux in the open arms and 80 lux in the closed arms. The test was performed at 5 h after the beginning of the dark phase. The animal was allowed to explore the maze freely for 5 min. A computer-controlled system recorded the number of entries and the time spent in each arm. Data were analyzed by using the MAZEsoft software (Panlab, Barcelona, Spain). Animals that fell off the maze during the test were excluded from the analysis.
Two days after the elevated plus maze test, the open field test was carried out, which isa square arena (80 cm × 80 cm and 40 cm high) virtually divided into a peripheral zone and a central zone (40 cm × 40 cm) located in a room with low light intensity (30 lux). The test was performed 5 h after the beginning of the dark phase. Rats explored freely for 5 min. A video tracking motion analysis system (Smart, Panlab, Harvard Apparatus, Spain) measured the total distance traveled (cm) and mean speed (cm/s), and calculated the time spent on central area as well as the number of entries to the central zone as an index of anxiety-like behavior.

3.1. Effect of Maternal and/or Postnatal Hypercaloric Diet on Offspring Behavior

The conditions of early life contribute greatly to the risk of mental disorders, and therefore, the study of the origins and mechanisms involved in the emergence of these disorders is essential for their prevention and/or treatment.
In this study, we demonstrate that a free-choice palatable diet during the perinatal period induces changes in the glutamatergic signaling of the adult offspring prefrontal cortex, associated with alterations in the endocannabinoid system, a main regulator of the glutamate synapses. Furthermore, these changes are more evident when the palatable diet is maintained after weaning, and its effects are sex-dependent.
Glutamatergic and endocannabinoid disorders induced by maternal diet are related to increased anxiety-like behavior in adulthood.

The following are available online at https://www.mdpi.com/2072-6643/12/6/1829/s1, Figure S1: Effect of maternal and/or offspring exposure to a free-choice palatable (P) diet on the relative mRNA levels of GABAergic signaling genes, Figure S2: Ponceau red of the membranes used for western blots and the proteins analyzed in each membrane. 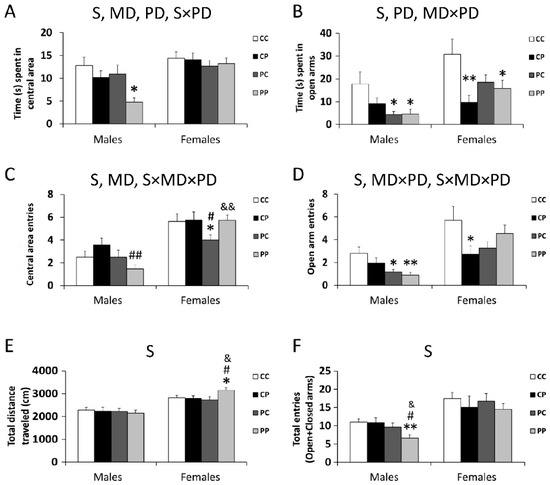 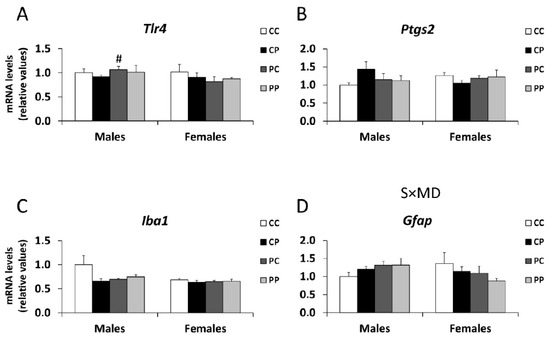