Caffeine and Caffeine Metabolites in Relation to Insulin Resistance and Beta Cell Function in U.S. Adults
Next Article in Special Issue

Background/Objectives: Hibiscus sabdariffa L. (H. sabdariffa (HS)) extract has a vascular relaxant effect on isolated rat thoracic aorta, but data on small resistance arteries, which play an important role on the development of hypertension, are still missing. The purposes of this study were (1) to assess the effect on isolated mesenteric arteries (MA) from normotensive (Wistar and Wistar-Kyoto (WKY)) and spontaneous hypertensive rats (SHR); (2) to elucidate the mechanism(s) of action underling the relaxant effect in light of bioactive components. Methods: Vascular effects of HS aqueous fraction (AF) on isolated MA rings, as well as its mechanisms of action, were assessed using the contractility and intracellular microelectrode technique. The patch clamp technique was used to evaluate the effect of HS AF on the L-type calcium current. Extraction and enrichment of AF were carried out using liquid–liquid extraction, and the yield was analyzed using HPLC. Results: The HS AF induced a concentration-dependent relaxant effect on MA rings of SHR (EC50 = 0.83 ± 0.08 mg/mL), WKY (EC50 = 0.46 ± 0.04 mg/mL), and Wistar rats (EC50 = 0.44 ± 0.08 mg/mL) pre-contracted with phenylephrine (10 µM). In Wistar rats, the HS AF maximum relaxant effect was not modified after endothelium removal or when a guanylate cyclase inhibitor (ODQ, 10 µM) and a selective β2-adrenergic receptor antagonist (ICI-118551, 1 µM) were incubated with the preparation. Otherwise, it was reduced by 34.57 ± 10.66% when vascular rings were pre-contracted with an 80 mM [K+] solution (p < 0.001), which suggests an effect on ionic channels. HS AF 2 mg/mL significantly decreased the peak of the L-type calcium current observed in cardiac myocytes by 24.4%. Moreover, though the vasorelaxant effect of HS, AF was reduced by 27% when the nonselective potassium channels blocker (tetraethylammonium (TEA) 20 mM) was added to the bath (p < 0.01). The extract did not induce a membrane hyperpolarization of smooth muscle cells, which might suggest an absence of a direct effect on background potassium current. Conclusion: These results highlight that the antihypertensive effect of HS probably involves a vasorelaxant effect on small resistance arteries, which is endothelium independent. L-type calcium current reduction contributes to this effect. The results could also provide a link between the vasorelaxant effect and the bioactive compounds, especially anthocyanins. View Full-Text
Keywords: Hibiscus sabdariffa; hypertension; mesenteric artery; vasorelaxation; anthocyanins; Ca2+ current Hibiscus sabdariffa; hypertension; mesenteric artery; vasorelaxation; anthocyanins; Ca2+ current
►▼ Show Figures 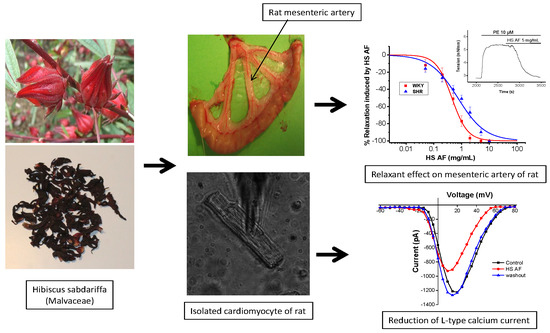