Effects of Leucine Administration in Sarcopenia: A Randomized and Placebo-controlled Clinical Trial

Sarcopenia, a common geriatric syndrome characterized by abnormal loss of muscle mass and function, is associated with a high risk for physical disability, functional dependence, poor quality of life, and death [1]. Korea is classified as one of the most rapidly aging countries worldwide [2], and prevalence of sarcopenia has been reported to be 20.8% among Korean elderly as defined by the European Working Group on Sarcopenia in Older People [3].
Sarcopenia is a major cause of frailty, a state of vulnerability to adverse outcomes characterized by unintentional weight loss, exhaustion, slowness, low physical activity, and weakness [4]. Among the frailty criteria, gait speed was most sensitive in predicting the onset of functional dependence in older adults [5]. Previous studies reported that approximately 60% of frail older people had sarcopenia, and mortality was higher in frail older people with sarcopenia than in those without sarcopenia [6,7]. As a modifiable risk factor, malnutrition, particularly inadequate dietary protein, has been shown to promote the development of sarcopenia and frailty [8,9].
A meta-analysis of epidemiologic studies reported that protein intake was inversely associated with frailty in older adults [10], and a clinical trial also showed that protein supplementation significantly improved lean mass in older adults [11]. The European Society for Parenteral and Enteral Nutrition Expert Group and PROT-AGE study group recommend protein intakes of 1.0–1.2 g/kg/day for healthy older adults and 1.2–2.0 g/kg/day for malnourished older adults with illness [12,13]. Previous clinical trials reported that a diet containing 1.5–1.6 g/kg/day of protein improved muscle mass without exercise compared with a diet containing 0.8–1.2 g/kg/day of protein in older adults, with a habitual protein intake of 0.8–1.1 g/kg/day [14,15]. However, Tieland et al. [16] showed that protein supplementation of 0.41 g/kg/day did not improve muscle mass without exercise compared with isocaloric placebo in older adults. On the other hand, a meta-analysis of clinical trials showed that an average 60% (>0.31 g/kg/day) increased protein intake from habitual protein intake improved resistance training-induced muscle mass in adults [17].
Our previous double-blind randomized controlled trial showed that protein supplementation of 1.5 g/kg/day improved muscle mass and gait speed compared with protein supplementation of 0.8 g/kg/day or 1.2 g/kg/day in undernourished pre-frail and frail older adults [14]. To the best of our knowledge, a study determining the amount of protein from habitual protein intake required to improve muscle mass and function without exercise in older adults has not been conducted yet. Therefore, this secondary data analysis aimed to assess the amount of protein from habitual protein intake required to improve muscle mass and gait speed for older women and men with the use of data from the original clinical trial [14].

Pre-frail or frail participants aged 70 to 85 years with risk of malnutrition were recruited at four welfare centers in Seoul, Korea, between May 2016 and August 2017. Participants were excluded if they had comorbidities such as liver or kidney failure, if they were participating in another clinical trial, or if they were unable to walk or communicate. Participants were assigned to the following three groups: 0.8, 1.2, or 1.5 g/kg/day protein group in the ratio of 1:1:1 for the 12-week intervention [14]. The 0.8 g/kg/day protein group consumed only placebo powder containing maltodextrin, and the 1.2 g/kg/day and 1.5 g/kg/day protein groups consumed a combination of whey protein and placebo powder (Korean Medical Food, Seoul, Korea) based on their usual protein intake assessed by 3-day 24-hour recall during screening. All participants were supplemented with 200 kcal/day of powder with 340 mL of corn silk tea (Kwangdong Pharmaceutical, Seoul, Korea). In addition, participants were asked to maintain their usual physical activity during a 12-week intervention. From a total of 120 participants who enrolled in the intervention study [14], 96 participants who completed the intervention study were included in the present study. Change in protein intake (g/kg/day) was analyzed as a categorical variable using tertiles in sex-specific tertiles and total older adults.
This study (KCT001923) was conducted according to the guidelines in the Declaration of Helsinki and approved by the Institutional Review Board of Hanyang University (HYI-15-228). All participants provided informed consent before enrollment in the study.

Information about age, sex, living alone, smoking status (never, former, or current), and alcohol drinking was obtained through interviews. Comorbid status was determined based on the presence of 0, 1, and ≥2 of the following diseases: hypertension, diabetes mellitus, cancer, chronic obstructive pulmonary disease, myocardial infarction, heart failure, angina, asthma, arthritis, cerebral ischemia, or renal disease [18]. Cognitive impairment was measured using the Korean Mini-Mental State Examination score of less than 24 [19]. Disabilities were defined as dependence in at least one item in the Korean activities of daily living (ADL) [20] and Korean instrumental activities of daily living (IADL) [21]. Risk of malnutrition was defined as a Mini-Nutritional Assessment score of less than 23.5 [22], and participants who met ≥1 and ≥3 of the modified Cardiovascular Health Study (CHS) frailty criteria [4] were considered pre-frail and frail, respectively. The CHS frailty criteria comprise five criteria, with scores ranging from 0 to 5 (unintentional weight loss ≥4.5 kg during the last year, exhaustion, low physical activity, gait speed, and weakness) [4]. Exhaustion was evaluated using the questions from the Center for Epidemiological Studies Depression scale. Low physical activity was calculated as the energy spent for a week based on the International Physical Activity Questionnaire. Slow walking speed was defined as <0.8 m/s from the average of the walking speed for 4 m, with 1.5 m before and after the walkway to allow for acceleration and deceleration. Low handgrip strength was measured twice at standing position using a digital hand grip dynamometer (Takei, Niigata, Japan), which was adjusted for sex and body mass index (BMI) [4].

Dietary intake was assessed by a registered dietitian using the 3-day 24-hour dietary recall before the intervention and after the intervention analyzed using the CAN-Pro version 4.0 (computer-aided nutritional analysis program, Korean Nutrition Society, Korea). Change in protein intake (g/kg/day) was calculated by obtaining the difference between the post-intervention value and the pre-intervention value. Changes in protein intake ranged from −0.39 to 1.01 g/kg/day in women and from −0.22 to 1.09 g/kg/day in men.

3.3. Association Between Protein Intake and Muscle Mass and Gait Speed

D.K. performed the statistical analysis and wrote the manuscript. Y.P. designed the study, revised the manuscript, and is responsible for the work. All authors have read and agreed to the published version of the manuscript.

We are deeply grateful to the study participants. 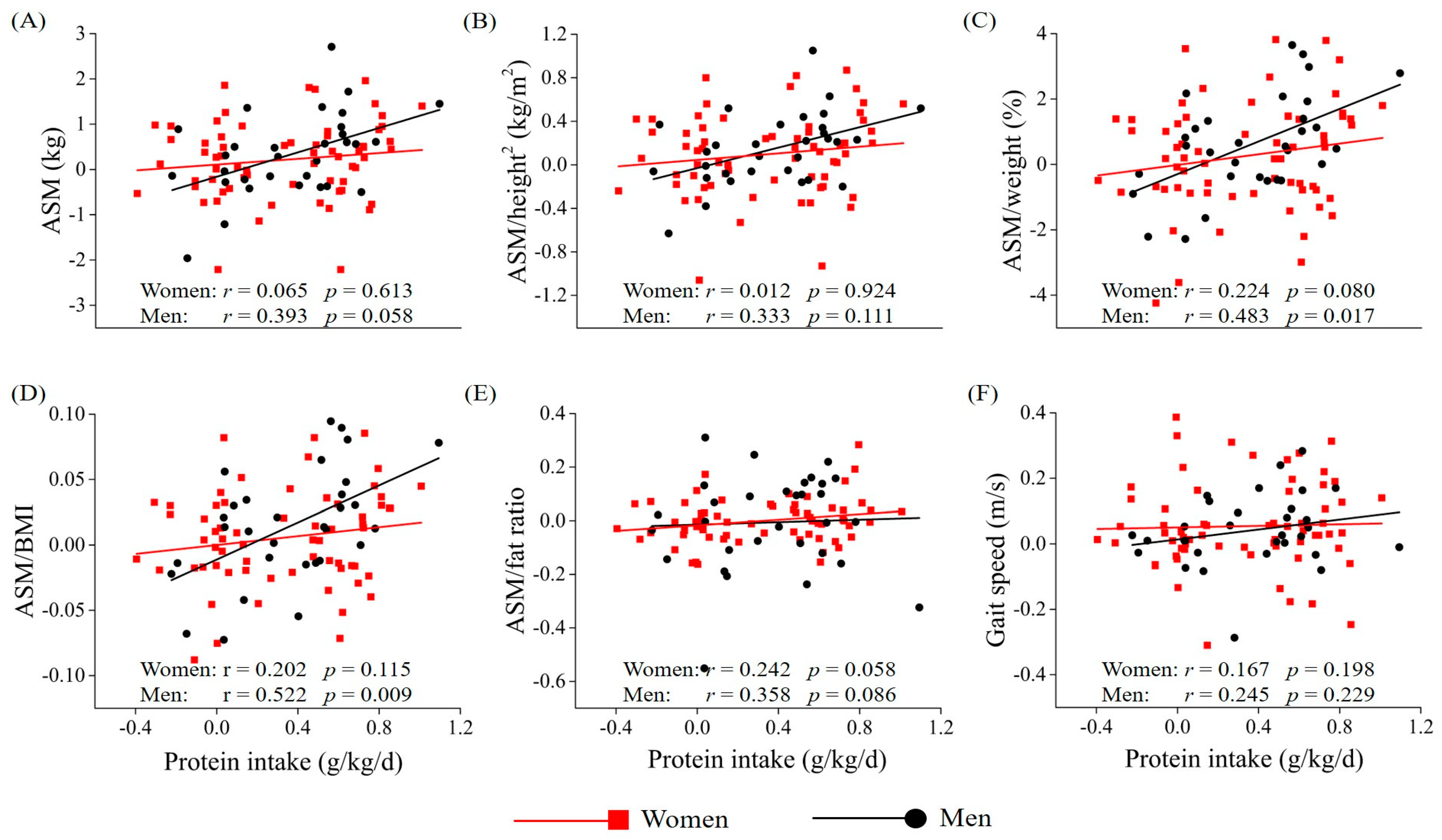