The Effects on Immune Function and Digestive Health of Consuming the Skin and Flesh of Zespri® SunGold Kiwifruit (Actinidia Chinensis var. Chinensis ‘Zesy002’) in Healthy and IBS-Constipated Individuals

Irritable bowel syndrome (IBS) is a common gastrointestinal disorder that results in constipation (IBS-C) or diarrhoea with abdominal pain, flatulence, nausea and bloating. Kiwifruit (Actinidia spp.) are nutrient-dense fruit with a number of reported health benefits that include lowering glycaemic response, improving cardiovascular and inflammatory biomarkers, and enhancing gut comfort and laxation. This study investigated the effect of consuming three whole Zespri® SunGold kiwifruit (Actinidia chinensis var. chinensis ‘Zesy002’) with or without skin on cytokine production and immune and gut health in healthy people and those with IBS-C symptoms. This study enrolled thirty-eight participants in a 16 week randomized cross-over study (19 healthy and 19 participants with IBS-C). Participants were randomized to consume either three kiwifruit without eating the skin or three kiwifruit including the skin for 4 weeks each, with a 4 week washout in between each intervention. There was a significant decrease in the pro-inflammatory cytokine, TNF-α, for both the healthy and the IBS-C participants when they consumed whole kiwifruit and skin, and also for the healthy participants when they ate whole kiwifruit without the skin (p < 0.001). The kiwifruit interventions increased bowel frequency and significantly reduced the gastrointestinal symptom rating scale constipation and Birmingham IBS pain scores for both participant groups. We have demonstrated that consuming the skin of SunGold kiwifruit might have beneficial effects on gastrointestinal health that are not produced by consuming the flesh alone.
Keywords: kiwifruit; immune health; gut health; immune markers kiwifruit; immune health; gut health; immune markers

Kiwifruit are recognised as a natural food that enhances laxation [1]. Laxation or defecation is an important process in maintaining human health and the feeling of well-being. Laxation induced by dietary fibre results in fermentation occurring more distally in the colon, providing protection against colorectal cancer and other disorders. Irritable bowel syndrome (IBS) is a widespread functional disorder that affects approximately 11% of the world’s population with a significant impact on their quality of life [2]. The presentation and aetiology of the condition are heterogeneous, with individuals presenting with either constipation or diarrhoea and a host of other gastrointestinal symptoms such as abdominal pain, flatulence, nausea and bloating. However, the mechanisms underlying the pathophysiology of the disorder remain unclear [2,3].
The proposed mechanisms include disturbed neural function along the gut–brain axis, abnormalities of motility, visceral sensation, and alterations in gut fermentation. More recently, important roles for low-grade inflammation and immunological changes have also become evident, including mucosal immune activation with the infiltration of mast cells and T cells into the intestinal mucosa and systemic immune activation leading to cytokine imbalance. This is based largely on the observation that there is a higher prevalence of IBS in individuals with prior exposure to an acute enteric infection than in individuals who have not been exposed and a higher prevalence of IBS-like symptoms in patients who have irritable bowel disease in remission [4,5,6,7].
Studies have suggested that cytokines may act as potential aetiological factors in IBS. There are increased plasma or serum concentrations of the cytokines TNF-α, IL-6, IL-8 and lower concentrations of IL-10 in individuals with IBS as opposed to healthy controls [7,8,9]. This has been supported by studies demonstrating polymorphisms in the genes for TNF-α, Il-6, IL-10 and other cytokines, leading to disturbances in the levels of expression of these compounds [10]. The use of probiotics and prebiotics as modulators of the gut microbiome in IBS is becoming widely accepted, with some evidence of efficacy, and there are a number of studies supporting their beneficial effects including inhibiting visceral hypersensitivity, improving intestinal barrier function and reducing symptoms such as flatulence, abdominal distension and gastrointestinal discomfort [11,12]. It is unclear whether probiotics or prebiotics exert their beneficial effects by modulating immune function [4].
Recent research has investigated the role of kiwifruit in gut health in both healthy individuals and those suffering from IBS complicated with constipation. Green kiwifruit (Actinidia chinensis var. deliciosa ‘Hayward’) [13] and gold Zespri® SunGold kiwifruit (Actinidia chinensis var. chinensis ‘Zesy002’) [14] were shown to provide relief from constipation and some gastrointestinal symptoms such as bloating. The mechanisms through which they provide these effects are unknown but it is thought that components in kiwifruit, namely non-digestible soluble and insoluble fibre and kiwifruit polyphenols, improve stool frequency and general gastrointestinal health as well as providing functional benefits to gut health through prebiotic and gentle prokinetic effects. These studies used only the flesh of the fruit, as these fruit are usually consumed with the skin removed. The skin is, however, completely edible and may help increase fibre intake and preserve the high vitamin C content of the fruit. The skin contains a number of bioactive substances including tocopherols, sterols, triterpene, chlorogenic acid and flavonoids that have demonstrated some anti-bacterial activity and anti-oxidant properties [15,16].
In the present study, our primary hypothesis was that consuming whole fruit (including the skin) of SunGold kiwifruit would reduce the production and release into the blood stream of the inflammation biomarker C-reactive protein and the cytokines Il-6, IL-10 and TNF-α in individuals with IBS-C, and that this would be different when kiwifruit flesh alone was consumed. Our secondary hypothesis was that whole SunGold kiwifruit (flesh + skin) would reduce the gastrointestinal symptom scores (constipation, diarrhoea, flatulence, and abdominal pain) associated with IBS and this would be greater than for eating only the kiwifruit flesh.

Forty-six individuals were screened and, of these, 40 subjects met the inclusion criteria for this study. Thirty-eight participants completed this study. Two participants withdrew from this study: one withdrawal occurred shortly after the first lead-in period due to health issues that were unrelated to the study products or interventions. One participant withdrew due for personal reasons (Figure 1).
There were no significant differences in the baseline blood biochemistry as analysed by the Chem-20 panel and results were in reference ranges (data not shown). Self-reported compliance with consumption of the study products was 87% and the products were well tolerated, with minor side effects such as flatulence being the only adverse events relating to the study product. The demographics of the participants are shown in Table 2. The values for HbA1c in all participants were in the normal range (<40 mmol/mol) and there were no significant differences between the beginning and the end of this study for the participants in either group.

The primary measurement of the trial was change in the concentrations of pro-inflammatory cytokines (TNF-α, IL-6) and an anti-inflammatory cytokine (IL-10) in the blood compared with the baseline. Cytokines were measured at the end of each treatment period and in the washout period and are presented in Table 3 and Figure 2. There was a significant decrease in TNF-α compared with the baseline measurement (p < 0.001) when participants from both the healthy and IBS-C groups ate the kiwifruit and skin. While there was a significant treatment effect (p < 0.001), there was no group or treatment x group effect. For IL-6, there were no significant differences for treatment, group or treatment x group. Mean concentrations of IL-6 were variable and numerically higher in the blood for both treatments in the healthy group and were lower in the IBS-C group. For IL-10, there were no significant treatment or treatment x group effects but there was a significant difference between the healthy and IBS-C participants. Mean concentrations of IL-10 were higher and more variable in the healthy participants. In the IBS-C group, IL-10 was also significantly lower than baseline following the kiwifruit flesh-only intervention (p = 0.003). Further, C-reactive protein (CRP) was measured in the blood of the participants at baseline and at the end of each intervention phase (data not shown). There were no significant effects of either the kiwifruit flesh or kiwifruit flesh and skin treatments on the level of CRP observed in either participant group.

Participants rated their degree of gastrointestinal discomfort using the gastrointestinal symptom rating scale (GSRS) comprising fifteen questions relating to gastrointestinal discomfort rated on a 1–7 scale (no discomfort to very severe discomfort). Following Svelund et al. [19], the GSRS data were grouped into five subscales or domains: diarrhoea, indigestion, constipation, abdominal pain, and reflux (Table 5). There was a significant treatment effect for the constipation and abdominal pain domains, and significant group effects for all five domains. Constipation was significantly reduced for the IBS-C participants for both kiwifruit treatments when compared with the baseline (p = 0.004). As expected, the baseline scores for the five domains were significantly higher at baseline for the IBS-C participants than the healthy participants. There was a significant treatment x group effect for the constipation domain (p = 0.018).

This randomized, controlled study examined the consumption of three Zespri® SunGold kiwifruit daily in healthy individuals and individuals with IBS-C and aimed to show that consuming whole fruit (with and without the skin) of SunGold kiwifruit would affect the production of the inflammatory marker C-reactive protein and cytokines IL-6, IL-10 and TNF-α in healthy individuals and those with IBS-C. We found the consumption of kiwifruit reduced the concentrations of the pro-inflammatory cytokine, TNF-α, but had no effect on IL-6, IL-10 or C-reactive protein concentrations in the blood. Clinically significant changes were observed in the healthy and IBS-C participants of greater than 1 CSBM per week and was enhanced in the IBS-C study population, in which CSBMs increased to greater than 2 per week with the kiwifruit flesh and skin. Symptoms of gastrointestinal discomfort were also improved in the IBS-C participants, with a decrease in constipation.
This study is the first to assess the impact of consuming the skin with the flesh for SunGold kiwifruit. We have demonstrated that consuming the skin of kiwifruit might have beneficial effects on gastrointestinal health that are not produced by consuming the flesh alone. Further studies in this area are required to expand on these findings using the same and other populations. This will ascertain whether there are similar effects in other populations and to investigate the mechanisms of action that drive these effects.

This research was funded by the Plant & Food Research Kiwifruit Royalty Investment Programme.

We thank Pramod Gopal for supporting the funding application. 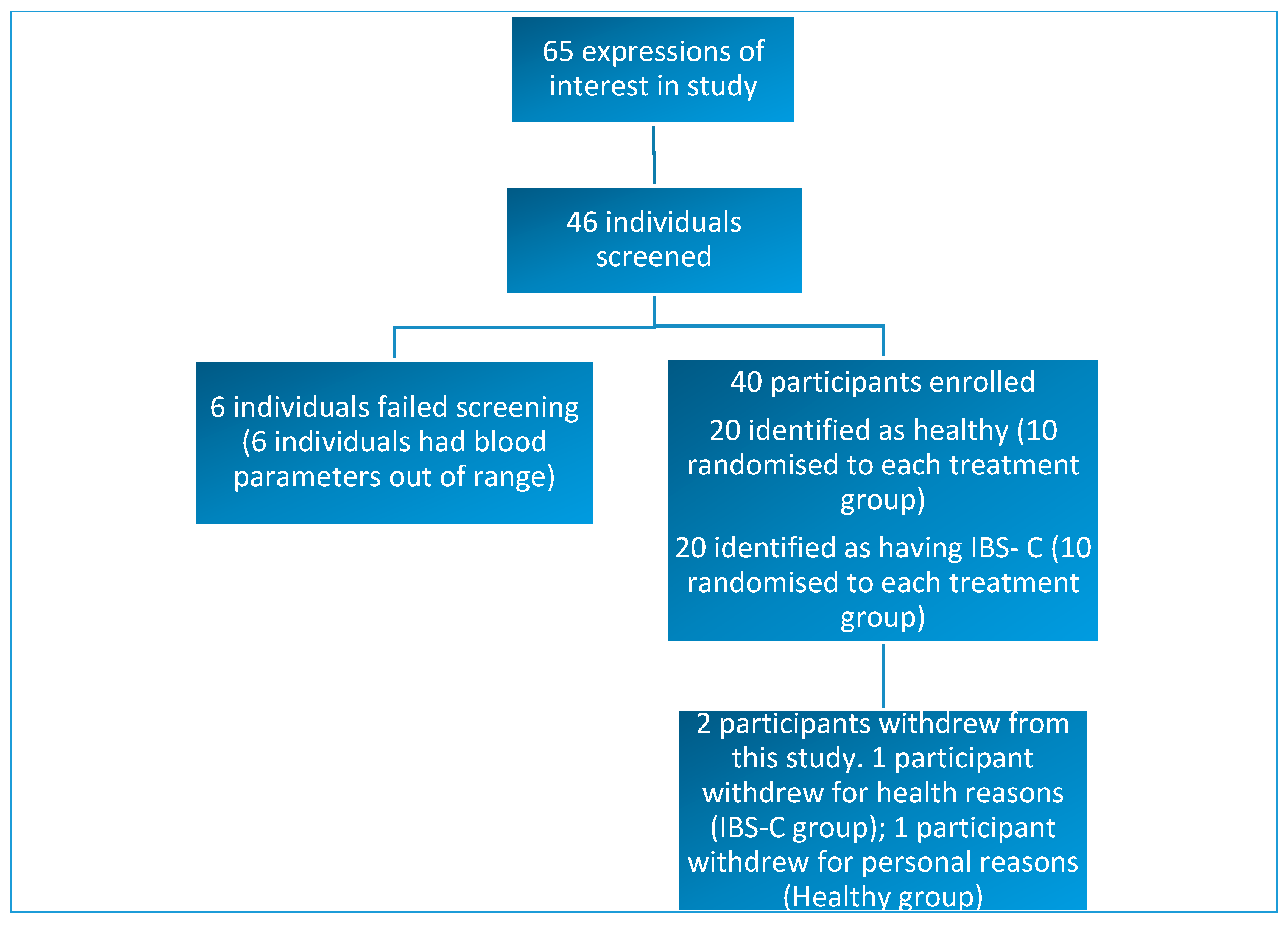 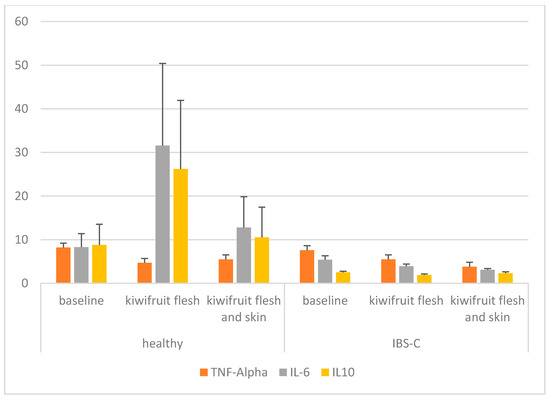