Effect of a Combination of Citrus Flavones and Flavanones and Olive Polyphenols for the Reduction of Cardiovascular Disease Risk: An Exploratory Randomized, Double-Blind, Placebo-Controlled Study in Healthy Subjects
Previous Article in Journal

Chronotype and Adherence to the Mediterranean Diet in Obesity: Results from the Opera Prevention Project

Sleep Quality in Obesity: Does Adherence to the Mediterranean Diet Matter?

Obesity and unhealthy eating habits have been associated with sleep disturbances (SD). The Mediterranean diet (MD) is a healthy nutritional pattern that has been reported to be associated with better health and sleep quality. Thus, the aim of the study was to investigate whether adherence to the MD is associated with sleep quality in a population of middle-aged Italian adults. This cross-sectional study included 172 middle-aged adults (71.5% females; 51.8 ± 15.7 years) that were consecutively enrolled in a campaign to prevent obesity called the OPERA (Obesity, Programs of Nutrition, Education, Research and Assessment of the best treatment) prevention project that was held in Naples on 11–13 October 2019. Anthropometric parameters, adherence to the MD and sleep quality were studied. Overall, 50.6% of the subjects were good sleepers (the Pittsburgh Sleep Quality Index (PSQI) < 5) while 49.4% were poor sleepers (PSQI ≥ 5). Our results demonstrated that good sleepers, when compared to poor sleepers (p < 0.001) had significantly higher adherence to the MD as assessed by PREDIMED (Prevención con Dieta Mediterránea) score, lower BMI (body mass index) and waist circumference (WC). The higher PSQI, the higher the BMI (p < 0.001) and WC values (p < 0.001), thus suggesting that poor sleep was more common in subjects with obesity. In addition, a negative correlation between PSQI and the PREDIMED score (p < 0.001) was found. to the intake of the cluster of foods enclosed in the MD, rather than the intake of the single food, predicted PSQI. By performing a receiver operator characteristic (ROC) curve analysis, we determined a cut-off value at a PREDIMED score < 9 as the threshold for screening poor sleepers. In conclusion, good sleepers had lower BMI and WC and higher adherence to the MD than poor sleepers. PSQI was positively associated to BMI and WC while it was negatively associated to adherence to the MD. The consumption of the MD dietary pattern rather than the intake of a single nutrient has a beneficial effect on sleep quality. Hence, the assessment of sleep should be taken into account in the management of obesity and promoting adherence to the MD could be a tool to improve SD. View Full-Text
Keywords: Mediterranean diet; sleep quality; obesity; lifestyle; sleep disturbances; BMI Mediterranean diet; sleep quality; obesity; lifestyle; sleep disturbances; BMI
►▼ Show Figures 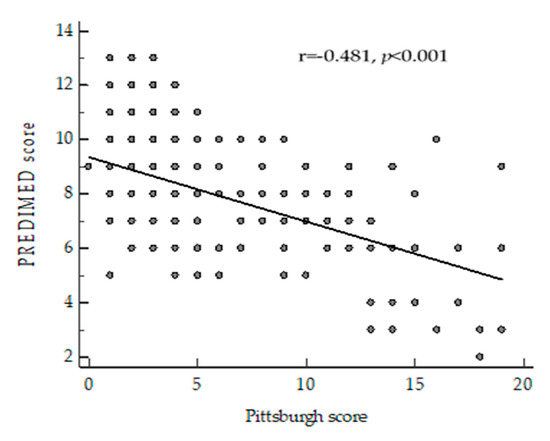