This study was a randomized, double-blind, parallel placebo-controlled trial. The participants and investigators were both blinded to the participant allocation. Participants who met the inclusion criteria were stratified by sex and randomly assigned into the ProBeptigen® or placebo group for eight weeks after enrollment (Figure 1). A computer-generated randomization list was provided by the sponsor to the study site. At the study site, subjects were sequentially assigned to the next randomization number. The inclusion criteria were: (1) healthy adults aged between 35–65 years old with normal BMI from 18.0 to 30.0 kg/m2 and above 40 kg in bodyweight at screening; (2) ability to understand and write Traditional Chinese or at least have completed primary school education; (3) normal performances measured by Cambridge Neuropsychological Test Automated Battery (CANTAB) [35]; and (4) a mild stress level, defined by the score on Perceived Stress Scale (PSS) [36] over 20. The exclusion criteria were: (1) existing or previous psychiatric diseases (bipolar disorder and schizophrenia), neurological diseases, dementia, severe head injury, cerebrovascular diseases, Parkinson’s disease, or other systemic diseases, including respiratory diseases, cancers, and diabetes; (2) the abstinence time of any psychotropic medication, such as anxiolytics and sedatives less than three months; (3) a history of allergy to chicken meat or other protein-based food or supplements; (4) long-term consumption of dietary supplement or herbal products likely to have an effect on memory; (5) smoking more than 10 cigarettes per day; or (6) alcoholism.

As per Figure 1, the screening evaluation was completed in visit 1 (3–28 days before the first treatment). All the participants gave the written informed consent before the study commencement. The participants took either 2 tablets (335 mg/tablet) of ProBeptigen® or placebo once daily in the morning, depending on their random allocation. Neurocognitive assessment, event-related potentials (ERPs) indexed by the P300 component, and blood tests were performed at visit 2 (baseline, before treatment), visit 3 (28 days after treatment commencement), visit 4 (56 days after treatment commencement) and visit 5 (two weeks post-treatment termination). For special interests on the potential effects of ProBeptigen® on mood and sleep quality, Beck Depression Inventory-second edition (BDI-II) [37], State-Trait Anxiety Inventory (STAI) [38], and Pittsburg Sleep Quality Index (PSQI) [39] were also performed on the same aforementioned occasions. The primary outcome was the change of cognitive function from baseline in at least one of the following visits between the placebo and treatment groups. The secondary outcomes were the differences of those indicator changes after treatment on the blood tests, P300, mood, and sleep quality between groups.

ProBeptigen® is a hydrolyzed chicken extract prepared from chicken meat which has undergone proprietary bio-processing technology and aqueous extraction. It comprises 91.4% protein (4.2% free amino acids, 7.6% diketopiperazines or cyclic dipeptides), 1.0% carbohydrate, 1.6% lipid, 2.0% moisture, and 4.0% minerals and ash. Specifically, diketopiperazines and their derivatives have shown neuroprotective or nootropic effects [40,41]. Two of them found in ProBeptigen® are cyclo-prolylglycine (cyclo-(Pro-Gly)) and cyclo(L-Phe-L-Phe), which have exhibited anti-amnesic activity [42,43]. Three pro-cognition amino acids are also identified in ProBeptigen®, including glutamate, arginine, and tyrosine, which consequently contribute to recognition memory enhancement [44], vasodilatation and neuroprotective effects [45,46,47], and working memory improvement [48,49,50], respectively.
Participants were requested to take two tablets of ProBeptigen® (335 mg/tablet, manufactured by BRAND’S Suntory Asia, Singapore, Singapore) or placebo (335 mg/tablet, manufactured by BRAND’S Suntory Asia) after meals every morning consecutively for eight weeks (56 days). The placebo tablet was identical to ProBeptigen® in appearance, made of microcrystalline cellulose.

Licensed clinical neuropsychologists blinded to the participant allocation administered the neuropsychological assessments. These neurocognitive instruments included the Logical Memory and Family Pictures subtests of the Wechsler Memory Scale-3rd edition (WMS-III) [51] and CANTAB.
The WMS-III is one of the most widespread memory assessments consisting of 10 primary and seven optional subtests. The Logical Memory subtests require the examinee to remember narrative stories presented orally. The Logical Memory I and II assess immediate and subsequent delayed recall, respectively. The Family Pictures subtests require the examinee to remember information of four colored pictures regarding seven family members acting in four different scenes visually presented in a sequential fashion. Similarly, the Family Pictures I and II examine immediate and delayed spatial memory respectively. The raw score of each index obtained from each subtest is transferred into a standardized score (mean = 10, standard deviation = 3) [52]. The Taiwanese version of WMS-III was used in the present study [53].
The CANTAB is one of the most extensively used computerized test batteries used to assess cognition via a tablet with a touch screen [54,55]. The CANTAB tasks are considered language independent and non-sensitive to gender with satisfactory levels of reliability and validity [56]. Given that a variety of CANTAB tasks were selected in the current study, detailed information regarding these tasks was described elsewhere (see the online Supplementary Material Tables S1 and S2).

The PSS is comprised of 14 items on a 5-point Likert scale (from 0 to 4) measuring the respondent’s subjective level of stress in the daily community situations, with higher scores indicating greater perceived stress. Given that no official cut-off score is available, the current study used a score of 20 as the criterion considering the means of the PSS in the previous study [57] falling around 17 to 19.
The BDI-II [37] consists of 21 self-rating items scored on a 4-point Likert scale (from 0 to 3) with a total score ranging from 0 to 63. In accordance with the BDI-II manual, the severity of depression can be distinguished by the total score as normal (0–13), mild (14–19), moderate (20–28), or severe (29–63). The traditional Chinese version of BDI-II was used in the study with the high internal consistency (Cronbach’s α = 0.94) [58] and test–retest reliability of 0.86 [59].
The STAI is one of the psychometrically validated instruments aiming to assess both state and trait anxiety separately [38]. Each type of anxiety consists of 20 different self-reported questions on a 4-point Likert scale (from 1 to 4); thus, scores in each subscale range from 20 to 80, with higher scores correlating with greater anxiety. The Taiwanese version of STAI used here has been shown good psychometrical properties [60].
Overall sleep quality was assessed using the PSQI [39]. It consists of 19 self-reported items contributing to seven components of sleep quality. A high overall score on represents a poor sleep quality with a clinical cut-off score of 5. The Taiwanese version of the PSQI has been validated and used in the current study [61] (see the online Supplementary Material Table S3 for the reference values of self-report instruments).

ERPs are very small voltages recorded from the scalp electroencephalography (EEG) originated from brain cortex in response to specific events or stimuli. The P300 is characterized by a large positive elicited wave which peaks around 300 ms after target stimulus onset in the process of decision-making; prominent over the parietal region [62]. The auditory P300 ERP appears when the patient is presented with an incongruent stimulus unexpectedly during a stimulus discrimination task. The P300 wave is analyzed by the size of the deflection (amplitude) and the time elapsed post-stimulus before activation (latency). Conventionally, shorter P300 latencies and larger amplitudes are associated with superior information processing in the brain [63,64]. In this study, auditory P300 was used as a physiological indicator for subjective cognitive functions. For the auditory ERP paradigm, binaural 750 (standard) and 2000 (target) Hz tones were delivered through headphones at 75 dB. The two kinds of tones were presented in random sequence once every 1 s, with the constraint that target stimulus probability was 0.20 in 360 trials. Brain activities were recorded at the Fz and Cz electrode sites with ears (A1, A2) as references. Both the amplitude and latency at the Cz were collected and analyzed. The setting was according to the routine clinical examinations.

Sample size calculations indicated that a total sample size of 72 subjects would be needed to observe the anticipated effect size f of 0.3 with a power of 0.80 and a correlation of 0.70 between repeated measures under repeated measures ANOVA methods using G*Power 3.1 software [65] according to a previous pilot study examining the effects of the ProBeptigen® on cognition in healthy adults. Demographic characteristics, neurocognitive function, and biochemistry profiles at baseline were compared between the ProBeptigen® and placebo groups using the independent Student’s t-test for continuous variables and the chi-square (χ²) test for categorical variables. Assessment of the change for neurocognitive function and biochemistry profiles between two groups from visit 2 to visit 5 were analyzed by applying generalized estimating equations (GEE) approach [66] with unstructured matrix model, which is commonly used for the analysis of longitudinal correlated data to obtain unbiased estimates of coefficients. The p-value obtained was the interaction term of treatment and time after considering the baseline data as a covariate, suggesting the result between the ProBeptigen® and placebo groups changed over time. All statistical analyses were performed using SAS Version 9.4 (SAS Institute Inc., Cary, NC, USA) considering two-sided probabilities with a p-value < 0.05.

This study was conducted in accordance with the Declaration of Helsinki and approved by the Joint Institutional Review Board of Taipei Medical University (reference no. N201711060). The study was also registered in ClinicalTrials.gov with the registration number NCT03612752.

According to Section 2.5, a significant difference in the change gradient between the two groups was interpreted as the significant interaction with a covariate using the baseline data, while the individual post-hoc test comparing the two groups at each visit were not significant if not addressed specifically.

One hundred and eleven adults were initially recruited but 90 of them (81.1%) were considered eligible for the subsequent randomization (Figure 2). The major reason of ineligibility was the subnormal performance on CANTAB. A total of 73 participants completed the trial with compatible drop-out rates of 16.3% and 21.3% in ProBeptigen® and placebo groups, respectively (χ² = 0.499, p = 0.480). No significant adverse events were reported and none of the drop-outs left because of intolerance of ProBeptigen® or placebo. The drop-out reasons were other commitments during the follow-up visits (12/17), pregnancy (1/17), technical errors in CANTAB at baseline (1/17), having influenza (1/17), and unknown causes (2/17). The drop-out rate is considered acceptable in the context of a non-life-threatening scenario for eight weeks.
There were no differences between groups on baseline demographics (age, education year), neurocognitive tests, perceived stress, ERPs, and plasma biochemistry profile, except for the fasting glucose level (Table 1).

There was increase of plasma fasting glucose levels in ProBeptigen® group when compared to placebo group (p = 0.008) (Figure 6). One outlier was identified in ProBeptigen® group and the follow-up examination of fasting blood sugar on this participant was within normal range (data not shown). The inflammation indicator, hs-CRP showed a statistically significant result (p = 0.042), suggesting that ProBeptigen® group had decreased hs-CRP level over time (mean score difference from visit 2 to visit 5, −0.08 ± 0.05) when compared to placebo group (mean score difference from visit 2 to visit 5, 0.04 ± 0.05). Furthermore, the pairwise comparison showed a significant difference between two groups at visit 4 and visit 5. The results of P300 did not show significant interaction effects in latency and amplitude between two groups (Figure 7).

In conclusion, daily ProBeptigen® 670 mg consumption for two months is suggested to improve verbal short- and long-term memory, as well as spatial working memory in middle-aged healthy individuals with perceived stress. Its anti-inflammatory effect was confirmed in humans, which may in part contribute to cognitive enhancement. Generally, ProBeptigen® has no detrimental effects on other cognitive domains, stress, mood, sleep quality, and biochemical markers. Indicators showing a trend of changes, such as reaction time task are encouraged to be included in future studies to clarify ProBeptigen® effects on these outcomes. The potential benefit of this supplementation on psychomotor speed should be verified in future studies.

This research was funded by BRAND’S Suntory Asia.

BRAND’S Suntory Asia provided ProBeptigen® and the placebo. The authors thank Aileen Lim for her contribution in the initiating and planning of the study.

Y Nakao and M Ow are employees of BRAND’S Suntory Asia. Other authors declare no conflict of interest. The funders had no role in the design of the study; in the collection, analyses, or interpretation of data; in the writing of the manuscript, or in the decision to publish the results. 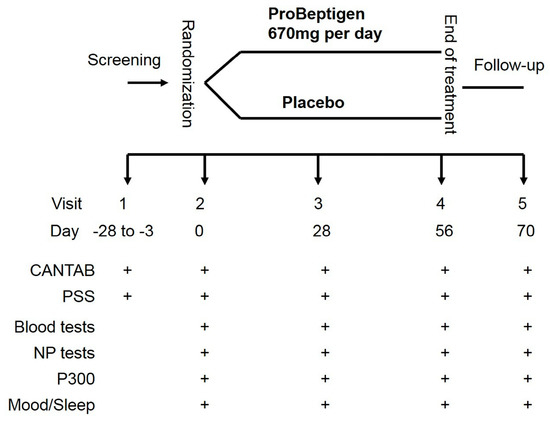 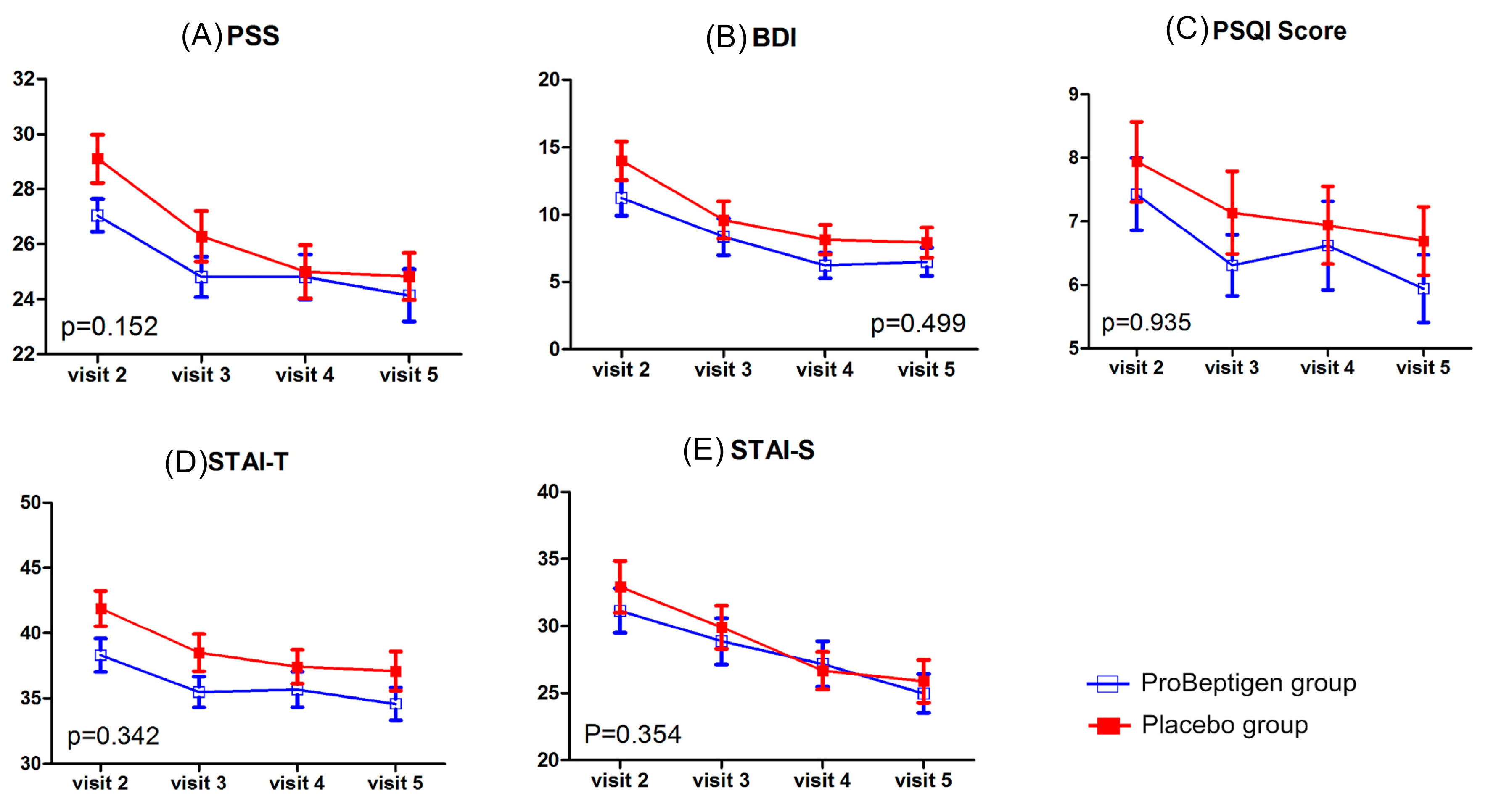 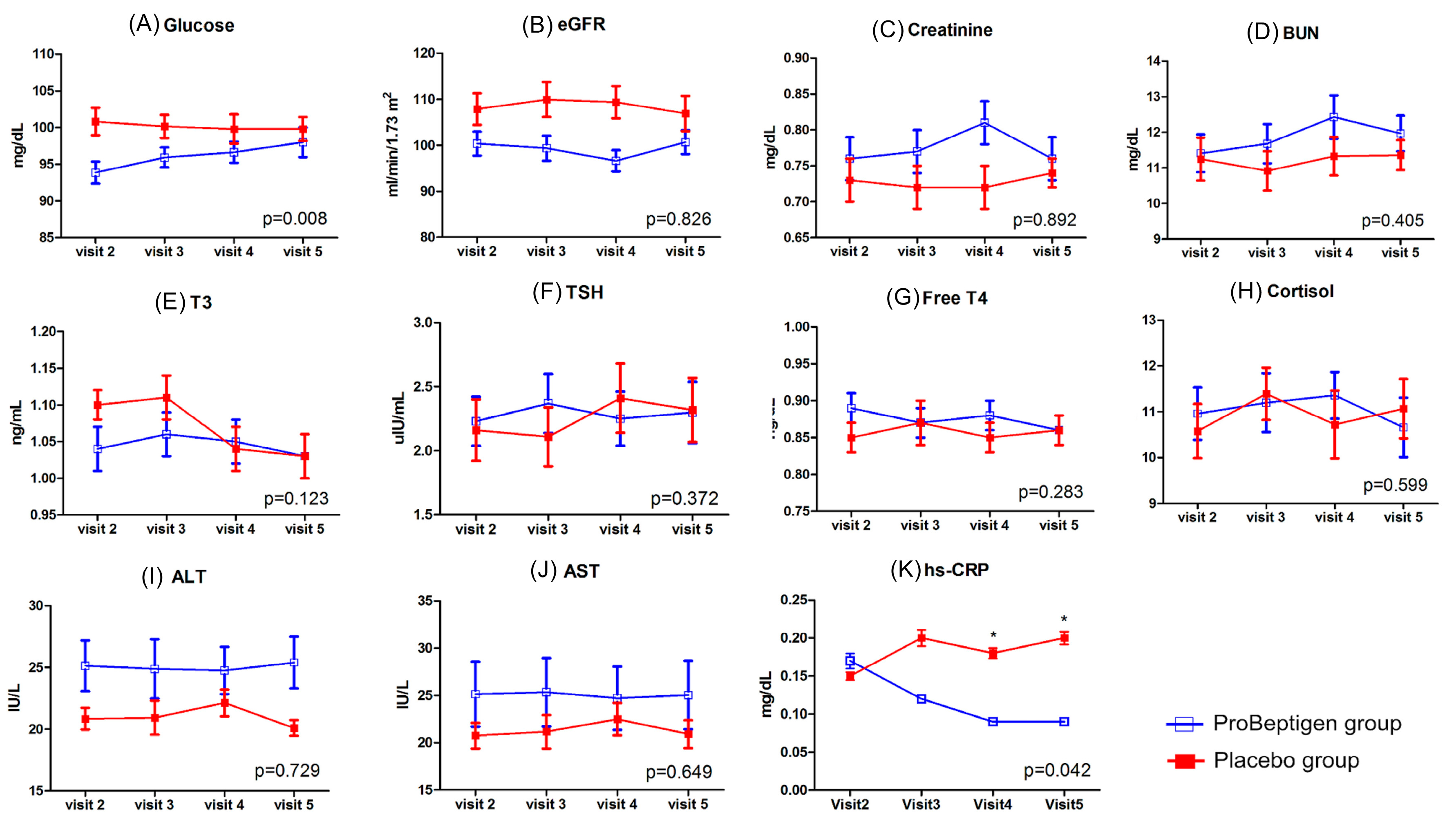