Pneumonia is a severe lower respiratory tract infection that can be caused by bacterial, fungal and viral pathogens, including the novel severe acute respiratory syndrome coronavirus (SARS-CoV-2) [1,2]. Lower respiratory tract infections are the leading cause of morbidity and mortality for communicable disease worldwide [3]. In 2016, lower respiratory tract infections resulted in more than 65 million hospital admissions and nearly 2.4 million deaths worldwide [4]. Mortality is particularly high for children under five and the elderly, which is of concern due to the increasingly aging population [5]. Increased incidence of community-acquired pneumonia is also associated with lower socioeconomic status and certain ethnic groups [5,6,7].
Pneumonia is a common complication and a major cause of mortality of the vitamin C deficiency disease scurvy, which suggests an important link between vitamin C status and lower respiratory tract infections [8]. The EPIC-Norfolk longitudinal study comprising more than 19,000 men and women has shown a 30% lower risk of pneumonia and a 39% lower mortality from pneumonia for people in the top quartile of vitamin C status (>66 µmol/L, i.e., saturating status), ascertained from a single baseline measurement at enrolment, compared with those in the bottom quartile of vitamin C status (≤41 µmol/L) [9]. Despite the known roles of vitamin C in supporting immune function through acting as an antioxidant and enzyme cofactor [10], surprisingly few studies have explored the link between vitamin C and pneumonia [11]. Two case control studies have indicated that patients with pneumonia have significantly lower vitamin C status than healthy controls, and there was an inverse correlation with the severity of the condition [12,13]. Two other studies that explored the time course indicated that up to 40% of patients with pneumonia exhibited vitamin C deficiency (i.e., plasma vitamin C concentrations <11 μmol/L) at hospital admission, and concentrations remained low for at least four weeks [14,15].
These studies indicate a higher utilization of, and potentially also a higher requirement for, vitamin C during lower respiratory tract infections. Patients with pneumonia may also have lower baseline vitamin C status, which could potentially make them more susceptible to infection. Due to the paucity of recent studies investigating the link between vitamin C and pneumonia, and the global relevance due to periodic outbreaks of SARS-related coronaviruses, we measured the vitamin C status of patients with community-acquired pneumonia who were admitted to the Acute Medical Assessment Unit or Intensive Care Unit of our public hospital. We also measured protein carbonyl concentrations, an established marker of oxidative stress. These parameters were compared with those measured in healthy controls.

Christchurch Hospital is the largest tertiary, teaching and research hospital in the South Island of New Zealand; it is located in New Zealand’s second largest city and services 600,000 people in the Canterbury region. A total of 50 patients were recruited for this observational study in Christchurch Hospital; 44 patients with community-acquired pneumonia were recruited in the Acute Medical Assessment Unit and medical wards (July 2017 to February 2018) and six patients with CAP were recruited in the Intensive Care Unit (December 2015 to August 2016). Ethical approval was obtained from the New Zealand Southern Health and Disability Ethics Committee (#16STH235 and #15STH36). Radiology reports for suspected pneumonia were viewed daily to identify potential patients. Many of the patients were elderly and to ensure a correct consent process, cognition was considered, along with a supportive family, to discuss this before continuing. All patients signed informed consent documents.

Community-acquired pneumonia was defined as a pneumonia that had been acquired outside of hospitals or health care settings. Pneumonia was defined in a patient with an acute illness and new inflammatory infiltrate on a chest radiograph, or a diagnosis of community-acquired pneumonia by the treating physician and the presence of at least one of the following acute respiratory signs and symptoms: Cough, increased sputum production, dyspnoea, core body temperature of ≥38.0 °C and auscultatory findings of abnormal breathing sounds or rales [16,17]. Other inclusion criteria were age ≥ 18 years and the ability to provide informed consent. Exclusion criteria were as follows: (1) pneumonia was (a) not the primary cause for hospital admission, (b) an expected terminal event or (c) distal to bronchial obstruction; (2) patients with tuberculosis or bronchiectasis; and (3) patients who had been in hospital within the previous 14 days, or had previously been entered in the study.

The CURB-65 score (range 0–5) was calculated from admission records using values from the first 12 h in hospital to determine severity and predict mortality of pneumonia and was calculated for all patients. The criteria were as follows: confusion of new onset (defined as an abbreviated mental test score (AMTS) of ≤8), blood urea nitrogen > 7 mmol/L, respiratory rate ≥ 30 breaths per minute, blood pressure < 90 mmHg systolic or ≤60 mmHg diastolic and age ≥ 65 years. Each criteria scored 1 point if met [18]. ICU severity scores were recorded if the patients were admitted to the ICU. These were Acute Physiology and Chronic Health Evaluation II and III score (APACHE II and III, range 0–79 and 0–299, respectively); Simplified Acute Physiology Score II (SAPS II, range 0–163); and Sequential Organ Failure Assessment score (SOFA, range 0–24). Common comorbidities were also recorded.

A blood sample (with heparin anticoagulant) was collected within 24 h of admission and pneumonia was confirmed via chest film. Because these were acutely ill patients, the blood samples were non-fasting. A blood sample was not able to be collected from one participant so their clinical data were excluded from the analysis. A second sample was collected from a subset of the participants on day of discharge (n = 14). Blood samples were also collected from a cohort of non-fasting healthy community controls who were resident in Christchurch (n = 50, 50% female, aged 57 ± 17 years). The blood samples were placed on ice and immediately transferred to the laboratory for centrifugation to separate plasma for vitamin C and oxidative stress biomarker analysis. An aliquot of the plasma was treated with an equal volume of 0.54 M perchloric acid and 100 µmol/L of the metal chelator DTPA to precipitate protein and stabilize the vitamin C. The supernatant and spare plasma samples were stored at −80 °C until analysis.

Participants were recruited in the Acute Medical Assessment Unit (AMAU; n = 44) and the Intensive Care Unit (ICU; n = 6). One of the AMAU patients was transferred to the ICU (for 12 days) following baseline measurements. There were 54% males in the cohort and a mean age of 68 ± 17 years (Table 1). The most common comorbidities were cardiovascular diseases, asthma and chronic heart failure. Mean CURB-65 score for the cohort was 1.9: 1.8 for the AMAU patients and 3.5 for the ICU patients (excluding two ICU patients who had transferred from other hospitals and so had lower CURB-65 scores at admission). Mean length of hospital stay (LOS) was 3 days, with a higher mean LOS of 24 days for the ICU cohort. Two of the patients in the AMAU cohort died (of cardiac complications) giving an overall mortality of 4% for the total cohort.
The ICU cohort exhibited more severe hematological parameters, including a significantly higher mean C-reactive protein concentration (p = 0.027; Table 2). Streptococcus pneumonia was the most common pathogen identified in the AMAU patients (11%), followed by Legionella (9%) and Haemophilus influenzae (7%), and 11% of the patients had viral pathogens identified (Adenovirus, Influenza A, Parainfluenza and Rhinovirus). Although Pseudomonas aeruginosa was the most common pathogen identified in the ICU patients, the role in causing the initial pneumonia was unclear.

The vitamin C status of community-acquired pneumonia patients admitted to hospital was 23 ± 14 µmol/L; this was significantly lower than healthy controls (56 ± 24 µmol/L; p < 0.001; Figure 1a). The patients admitted to the ICU had significantly lower vitamin C status than those admitted to AMAU (11 ± 3 µmol/L vs. 24 ± 14 µmol/L; p = 0.02). Protein carbonyls, an established biomarker of oxidative stress, were significantly elevated in patients with pneumonia compared with healthy controls (468 ± 305 vs. 159 ± 39 pmol/mg protein, respectively; p < 0.001; Figure 1b).
The pneumonia cohort comprised 96% patients with inadequate vitamin C status (i.e., <50 µmol/L), 62% with hypovitaminosis C (i.e., <23 µmol/L) and 22% with frank deficiency (i.e., <11 µmol/L; Figure 2). In contrast, the healthy controls comprised only 8% with hypovitaminosis C and no cases of deficiency.
Subsequent samples were collected from 14 (28%) of the participants (mean 2.7 ± 1.7 days, range 1–7 days); there were no statistically significant differences between baseline and subsequent samples for either vitamin C status or protein carbonyl concentrations (Table 3).

Patients with pneumonia exhibit low vitamin C status and an elevated prevalence of hypovitaminosis C and deficiency compared with healthy controls. This indicates an enhanced requirement for the vitamin during their illness. Due to the important roles that vitamin C plays in the immune system, low vitamin C status is possibly both a cause and a consequence of the disease. The patients also exhibited elevated oxidative stress as evidenced by significantly higher protein carbonyl concentrations than healthy controls. Elevated oxidative stress could be both a cause and a consequence of the low vitamin C status observed in the patients. Therefore, these patients would likely benefit from additional vitamin C supplementation to restore their blood and tissue levels to optimal. This may decrease excessive oxidative stress and aid in their recovery.

A.C. is a recipient of a Sir Charles Hercus Health Research Fellowship from the Health Research Council of New Zealand. Thank you to Bruce Dobbs for setting up the patient database, Marguerite DeAbaffy for helping to recruit patients and collect blood samples, and Kate Vick for processing the patient samples. 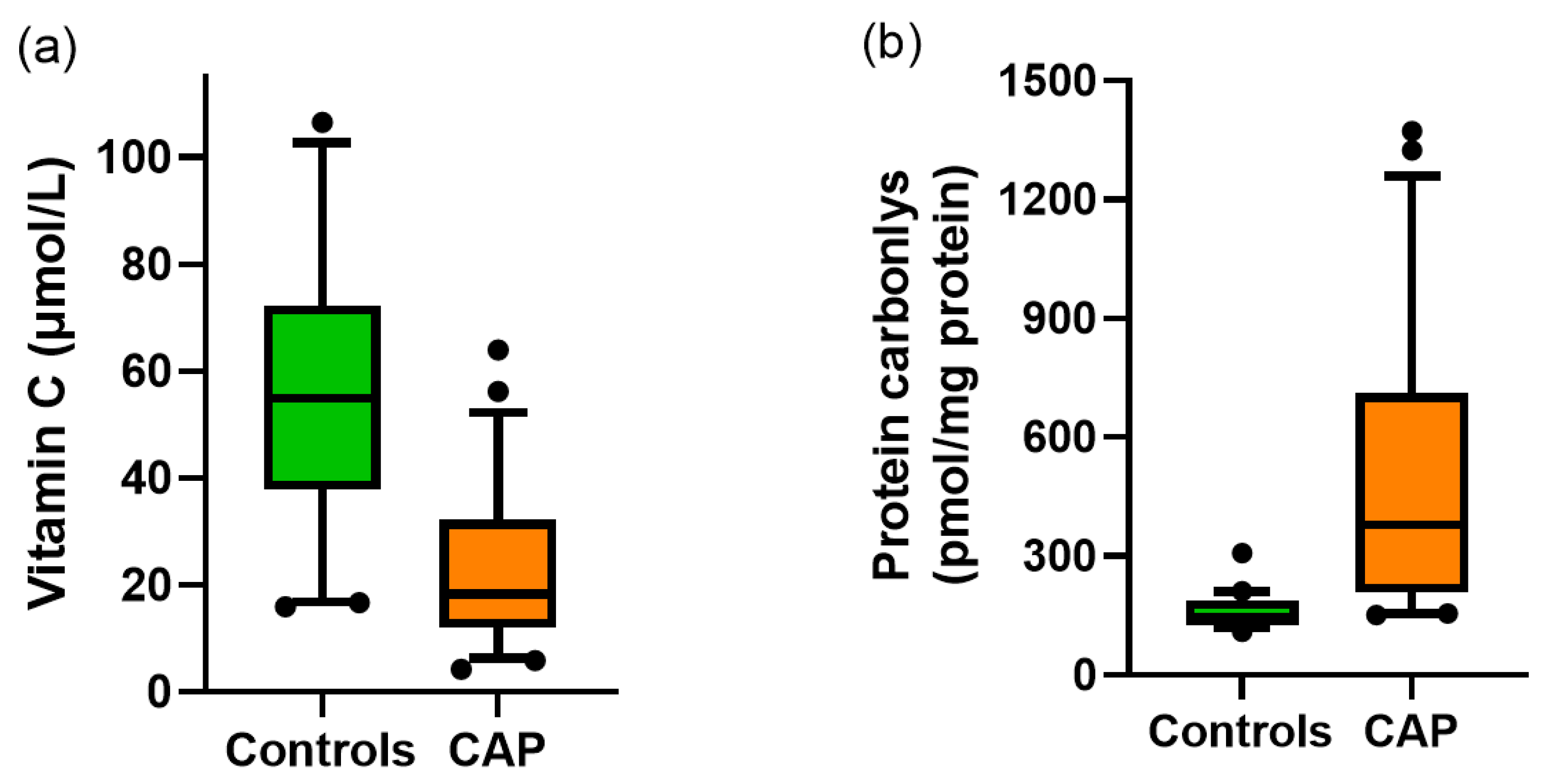 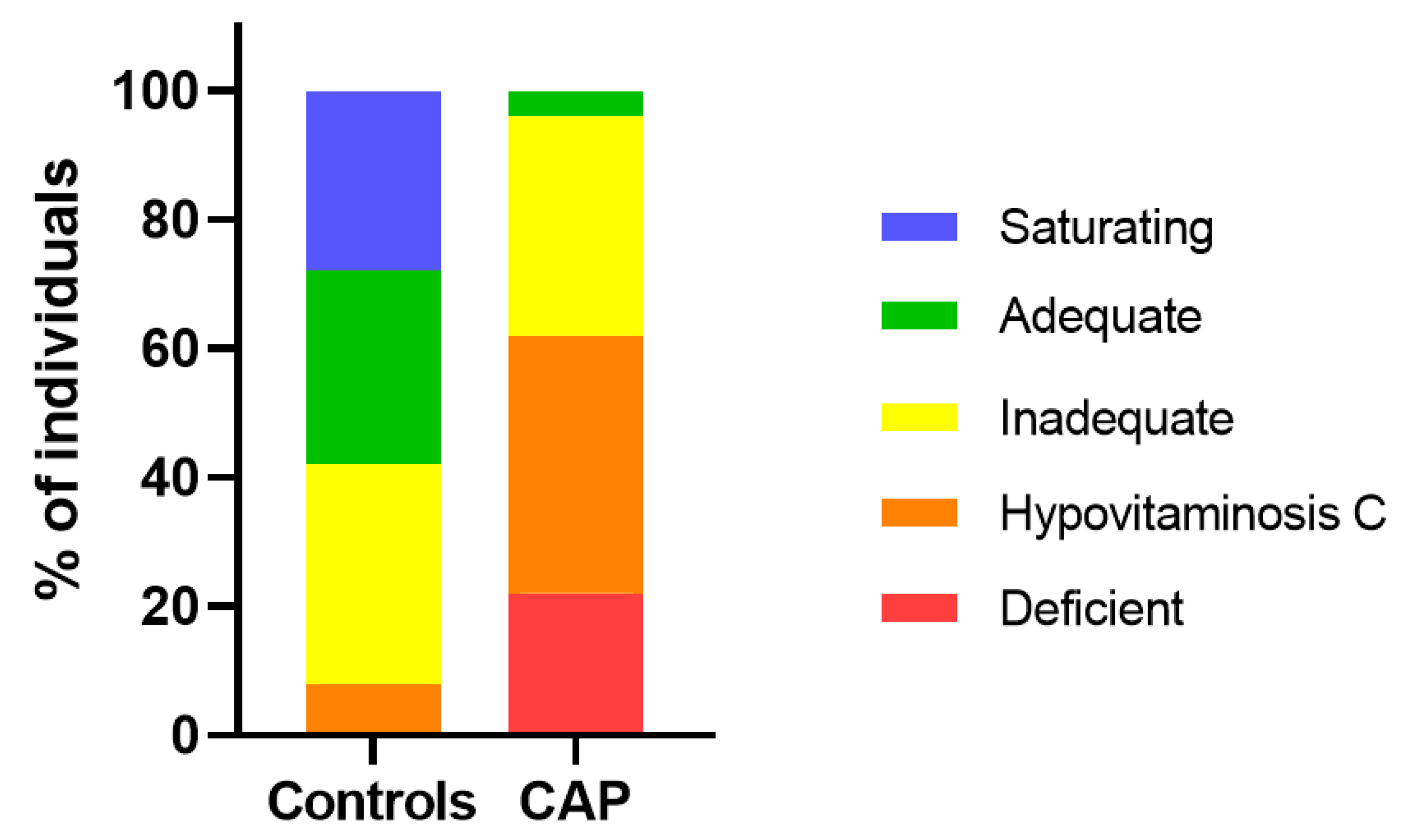