There is still little research examining the relationship between water consumption in school and specific cognitive performance. The aim of this cluster-randomized intervention CogniDROP trial was to investigate the short-term effects of drinking water during the morning on executive functions. The participants were from the 5th and 6th grade of a comprehensive school in Germany (14 classes, n = 250, 61.6% boys). The classes were randomly divided into an intervention group (an education on healthy drinking behavior and a promotion of water consumption) and a control group. A battery of computerized tasks (Switch Task, 2-Back Task, Corsi Block-Tapping Task and Flanker Task) was used to test executive functions. Urine color and thirst were evaluated to check the hydration level. Physical activity over the past 24 h was measured using GT3X ActiGraph. A non-linear relationship was observed between the amount of drinking water and executive performance. Consuming water up to 1000 mL (or up to 50% of Total Water Intake) had benefits during memory tasks. Urine color and number of steps on the study day correlated with water consumed. The results suggest that a water-friendly environment supports school-aged children in adequate water intake resulting in better cognitive performance, especially short-term memory. View Full-Text
Keywords: cognition; executive function; hydration; school children cognition; executive function; hydration; school children
►▼ Show Figures 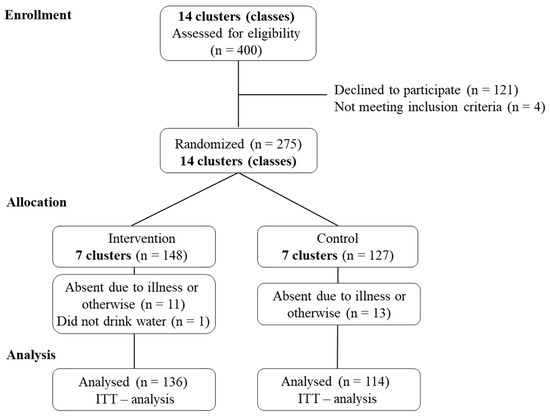