Child Overweight or Obesity Is Associated with Modifiable and Geographic Factors in Vietnam: Implications for Program Design and Targeting
Previous Article in Journal

The Protective Effects of 2’-Fucosyllactose Against E. Coli O157 Infection Are Mediated by the Regulation of Gut Microbiota and the Inhibition of Pathogen Adhesion

:
Various berries demonstrate antioxidant activity, and this effect is expected to prevent chronic diseases. We examined whether a diet containing blueberry powder could prevent the development of bladder dysfunction secondary to bladder outlet obstruction (BOO). Eighteen 8-week-old male Sprague-Dawley rats were randomly divided into three groups: Sham (sham operated + normal diet), N-BOO (BOO operated + normal diet) and B-BOO (BOO operated + blueberry diet). Four weeks after BOO surgery, the N-BOO group developed bladder dysfunction with detrusor overactivity. The B-BOO group showed significantly improved micturition volume and micturition interval. The urinary levels of 8-hydroxy-2′-deoxyguanosine (8-OHdG) and malondialdehyde (MDA) were measured as oxidative stress markers. In the N-BOO group, 8-OHdG increased 1.6-fold and MDA increased 1.3-fold at 4 weeks after surgery, whereas the increase in 8-OHdG was significantly reduced by 1.1-fold, despite a similar increase in MDA, in the B-BOO group. Bladder remodeling was confirmed due to bladder hypertrophy, fibrosis and increased connexin43 expression in the N-BOO group, but these histological changes were reduced in the B-BOO group. The intake of blueberries prevented the development of bladder dysfunction secondary to BOO. This effect seems to be related to antioxidation and the inhibition of bladder remodeling.
Keywords:
blueberry; Overactive Bladder Symptoms; Bladder Outlet Obstruction; rat model; functional food

Blueberries are widely consumed as a health food around the world. The bioactive components of blueberries demonstrate anti-oxidative, anti-inflammatory and anti-cancer effects [1,2,3,4]. Previous studies suggest that the major bioactive components of blueberries are anthocyanins, phenolic acids, ascorbic acid, flavonol and tannins [1]. Anthocyanins extracted from blueberries can prevent carcinogenesis and reduce the risk of cancer recurrence [2,5,6], while blueberries rich in anthocyanins increase anti-inflammatory cytokine levels and attenuate oxidative stress [3,7,8,9,10]. Blueberry juice also ameliorates hepatic fibrosis in rats [11]. The functional components of blueberries are expected to be useful in both preventing and treating chronic diseases caused by oxidative stress and chronic inflammation. In the future, blueberries may be used as prophylactic functional foods for chronic diseases such as cancer, diabetes and degenerative diseases, in addition to their use in the development of therapeutic agents based on these components [4,5,6].
Lower urinary tract dysfunction (LUTD) refers to impairments in urine storage and voiding, including bladder dysfunction such as detrusor overactivity (DO) and underactivity, and induces lower urinary tract symptoms (LUTS) such as storage, voiding and post-micturition symptoms. More than half of the middle- and old-aged populations have LUTS [12,13,14], and it is a concern that such symptoms reduce the quality of life [15,16,17].
Overactive bladder (OAB) is a syndrome with various etiologies characterized by urgency, frequent urination and nocturia [18]. OAB can be classified into neurogenic OABs and non-neurogenic OABs. In this study, we focused on one of the non-neurogenic OABs induced by BOO, with benign prostatic enlargement (BPE). The mechanisms underlying OAB with associated BPE are considered to involve mechanical obstruction of the urethra and functional obstruction due to smooth muscle contraction from the bladder neck to the prostatic urethra resulting from an enlarged prostate. These changes lead to extension, increased pressure and bladder ischemia, and also cause irritability of the bladder smooth muscle and hyperactivity of the afferent nerve with denervation supersensitivity [19]. Oxidative stress accumulated by ischemia is also considered to be one of the underlying mechanisms [20]. Moreover, bladder remodeling due to smooth muscle layer fibrosis and increased expression of connexin (Cx) 43 interferes with bladder smooth muscle coordination, resulting in abnormal bladder contraction, and it is considered to be one of the underlying causes of bladder smooth muscle irritability [21,22].
We hypothesized that components within blueberries could prevent the development of bladder dysfunction by attenuating chronic oxidative stress. Therefore, in this study, we investigated whether the intake of a diet containing dried blueberry powder in rats with bladder outlet obstruction could prevent or attenuate the development of bladder dysfunction.

The current study used BOO rats, a model of lower urinary tract obstruction. The experimental protocol was reviewed and approved by the Fukushima Medical University Animal Ethics Committee (permission No.28093).
Eighteen 8-week-old male Sprague Dawley rats weighing 260 to 300 g were used. The rats received a normal diet or a normal diet containing 2% freeze-dried Canadian wild blueberry powder (Blueberry diet) for 7 days preoperatively. The rats then underwent BOO or sham surgery at 9 weeks old. From the day of the operation, the BOO rats continued to receive a normal diet (N-BOO group) or a Blueberry diet (B-BOO group) for 4 weeks after surgery. Sham-operated rats also continued to receive a normal diet (Sham group) for 4 weeks.
During week 4 postoperatively, urine was collected from the rats housed in a metabolic cage for a 24-hour period to determine the urinary concentration of creatinine and oxidative stress markers, as described below. Continuous cystometry was carried out on conscious rats from each group. After cystometrogram recording, rats were sacrificed and the bladder was removed and weighed. The bladders were then examined by histological and Western blot analyses.

Nine-week-old rats were anesthetized with 2% isoflurane. BOO was created by incomplete ligation of the urethra using a standardized method [23]. Sham-operated rats underwent similar surgery but no obstruction was created.

On day 3 prior to continuous cystometry, each rat was anesthetized with 2% isoflurane. INTRAMEDIC™ PE-50 polyethylene tubing (BECTON DICKINSON Japan, Tokyo, Japan) was inserted into the bladder dome and the other end of the tube was brought out through the subcutaneous tunnel in the back. Three days later, continuous cystometry was performed in conscious rats without restraint in a metabolic cage [24]. The bladder tube was connected through a T-tube to a pressure transducer for recording bladder pressure and to an infusion pump for continuous saline infusion into the bladder. An analytical balance was placed under the metabolic cage. The transducer and balance were connected to a PowerLab® system to record bladder pressure and micturition volume as saline was infused into the bladder at a rate of 10 mL per hour.

We determined the levels of urinary 8-hydroxy-2′-deoxyguanosine (8-OHdG) and malondialdehyde (MDA) as markers of DNA damage and lipid peroxidation, respectively. To evaluate the urinary levels of these markers, the urine collected from rats was centrifuged at 5,000 x g for 10 min. The 8-OHdG, MDA and creatinine in the resulting supernatant were determined using a New 8-OHdG ELISA Kit (Japan Institute for the Control of Aging, Shizuoka, Japan), a NWLSSTM malondialdehyde Assay (Northwest Life Science Specialties, Vancouver, British Columbia, Canada) and LabAssayTM Creatinine Kit (Wako, Osaka, Japan), respectively.

Bladders from 6 rats per group were immersed in 10% neutral buffered formalin, embedded in paraffin and cut into 5 μm sections. Bladder sections were stained with hematoxylin–eosin, and Masson trichrome (Muto Pure Chemicals, Tokyo, Japan). The percentage of collagen in the bladder muscle layer was calculated for 4 high power fields as the sum of the blue-stained area divided by the sum of all red- and blue-stained areas.

We determined the expression levels of Cx43 and connective tissue growth factor (CTGF) protein in the bladder. Bladder extracts were prepared from a whole bladder homogenized in CelLyticTM MT Cell Lysis Reagent (Sigma-Aldrich, St. Louis, MO, USA). Total protein concentration was quantified using a BCA Protein Assay Kit (Takara-Bio, Shiga, Japan) and a microplate reader. Thirty μg of homogenate protein was loaded and separated by 10% SDS-PAGE gel and transferred onto Immobilon-P transfer membranes (Merck Millipore Japan, Tokyo, Japan). The membranes were blocked for 2 h with 3% skim milk in Tris-buffered saline-Tween20 (TBS-T) at 4 ℃, and sequentially incubated with rabbit anti-Cx43 antibody (1:500, Novus Biologicals), rabbit anti-CTGF antibody (1:1000, GeneTex) or mouse anti-beta-actin antibody (1:20000, Proteintech) at 4 ℃ overnight. After washing with TBS-T, membranes were incubated for 1 hour with HRP-conjugated anti-rabbit-IgG (1:2000) or anti-mouse-IgG (1:4000) at room temperature. After washing membranes with TBS-T, protein bands were visualized with ImmunoStar® Zeta (Wako). The expression levels of Cx43 and CTGF proteins per beta-actin protein of the Sham group were regarded as 1.0.

In order to clarify the mechanisms underlying the suppression of dysuria on the intake of blueberries, urinary levels of the oxidative markers, 8-OHdG and MDA, were evaluated. In the N-BOO group, the urinary 8-OHdG and MDA levels were significantly increased compared with those in the Sham group (Figure 2). However, in the B-BOO group, the 8-OHdG level was markedly decreased compared with that in the N-BOO group, although there was no significant difference in the MDA level.

Histological examination indicated the expression of collagen was induced by BOO, and the increase was suppressed by the intake of the blueberry diet. Therefore, the effect of blueberries on Cx43 and CTGF were evaluated by Western blot analyses. The protein expression levels of Cx43 in the bladder in the N-BOO and B-BOO groups were significantly increased by 2.3- and 1.3-fold, respectively, compared to that in the Sham group (Figure 4). There was also a significant difference between the BOO groups. On the other hand, there were no significant differences in the CTGF expression level among the three groups.

This study was supported by a grant from the Japan Society for the Promotion of Science Grant-in-Aid for Young Scientists (B) Grant Number JP17K12903. 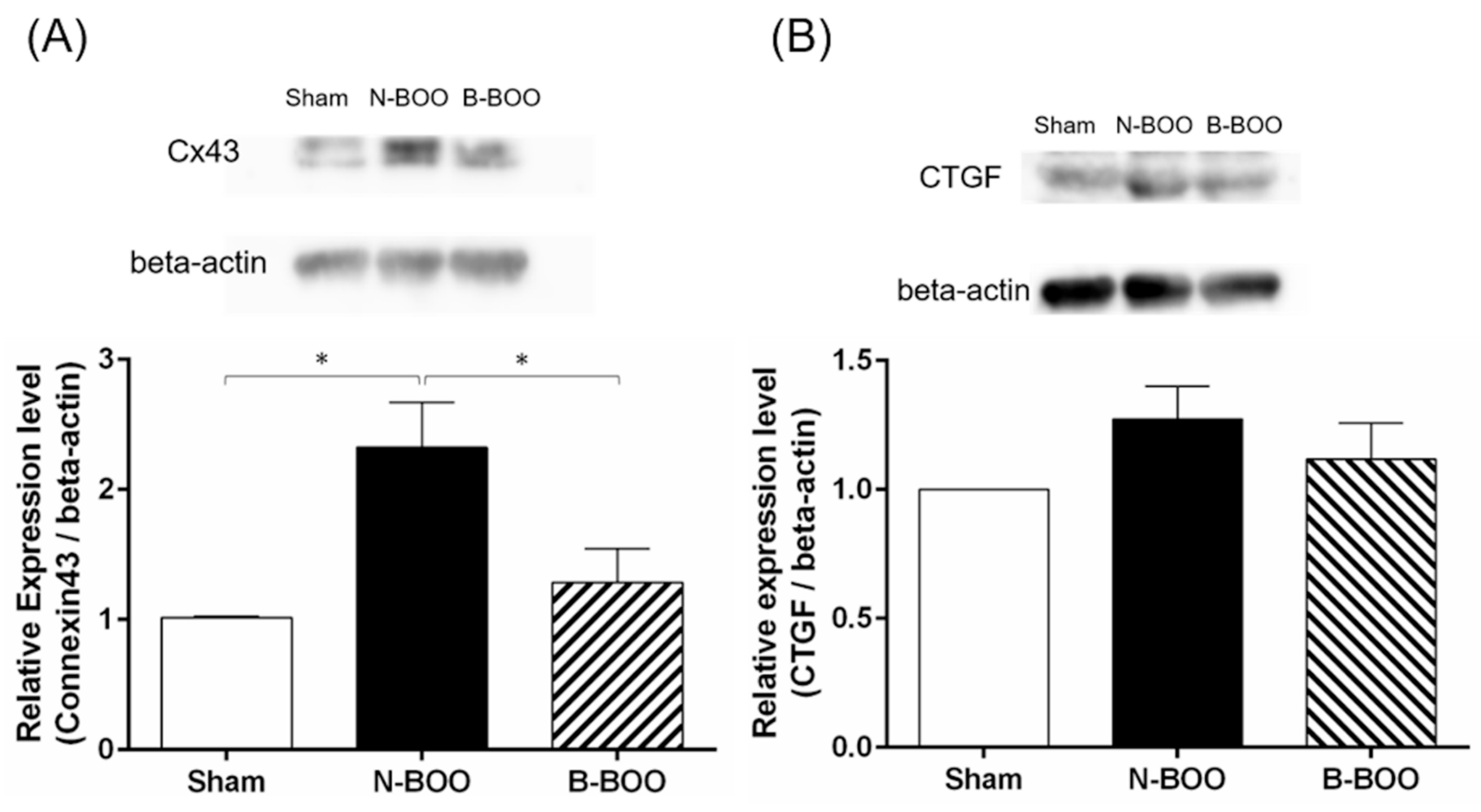