Preventive Effects of Schisandrin A, A Bioactive Component of Schisandra chinensis, on Dexamethasone-Induced Muscle Atrophy

Endogenous carbohydrate stores are limited and thus sufficient to fuel only a few hours of continuous, submaximal (70–80% maximal oxygen uptake) exercise. Muscle and liver glycogen depletions are associated with the onset of fatigue and impairment of exercise performance [1]. Meanwhile, body fat deposits are large and represent a vast source of fuel for exercise. Therefore, enhancement of fat oxidation leads to glycogen sparing and has been suggested to improve endurance exercise performance [2]. It is well known that chronic endurance exercise training enhances the capacity for muscle and whole-body fat oxidation [3,4,5,6]. In addition, long-term intake of a high-fat diet additively enhances training-induced fat oxidation capacity [7,8,9]. In particular, a very high-fat and extremely low-carbohydrate diet, known as the ketogenic diet, enhances the capacity to convert fat to ketone bodies in the liver and utilize them in skeletal muscle [10,11]. Ketone bodies have been suggested to be more energy-efficient substrates than fatty acids [12,13,14]. Therefore, the ketogenic diet might be an effective dietary strategy to improve athletic performance in endurance events, especially in ultra-endurance events, such as ultra-marathon and triathlon races [15], and it has recently received much attention from athletes [16,17].
However, previous studies have demonstrated that extremely low-carbohydrate, very high-fat ketogenic diets induce substantial increases in pyruvate dehydrogenase kinase 4 (PDK4) content in skeletal muscle [18], which is a negative regulator of glycolytic flux [19]. Physiological adaptation to a ketogenic diet therefore diminishes carbohydrate utilization capacity during exercise [7,16,20]. In addition, ketogenic diets reduce muscle and liver glycogen levels as a consequence of their extremely limited carbohydrate content [21]. Thus, it has been suggested that low-carbohydrate ketogenic diets may not be suitable for athletes who engage in prolonged bouts of exercise involving high-intensity exertion, during which carbohydrates are utilized as a major energy substrate [22].
Medium-chain fatty acids (MCFAs), which consist of chains of 8–10 carbon atoms, have several unique properties in comparison with long-chain fatty acids (LCFAs). Unlike the majority of other dietary fats that are rich in LCFAs, medium-chain triglycerides (MCTs), which are composed exclusively of MCFAs, are hydrolyzed rapidly and the resultant MCFAs are absorbed directly by the liver through the portal vein [23,24]. MCFAs are more easily oxidized in the liver because their intramitochondrial transport does not require a carnitine palmitoyl transferase system [25], which is a rate-limiting step in mitochondrial β-oxidation. These characteristics make MCFAs a more ketogenic substrate than LCFAs in the liver. Therefore, incorporating MCTs into ketogenic diets, instead of long-chain triglycerides (LCTs), may allow for the consumption of more carbohydrate content and less fat content while preserving ketosis and enhancing ketone body utilization capacity without upregulating muscle PDK4 expression and thus inhibiting muscle carbohydrate metabolism. If MCTs have this effect, then MCT-containing ketogenic diets might be a valuable dietary strategy for athletes who require the ability to perform both high-intensity and endurance exercises.
The purpose of this study was therefore to examine the effects of long-term intake of a ketogenic diet containing MCTs and relatively more carbohydrate on endurance training–induced adaptations in metabolic enzymes in rat skeletal muscle tissue and to compare these effects with those observed under a conventional ketogenic diet composed exclusively of LCTs.

Seven-week-old male Sprague-Dawley rats (Japan SLC, Inc., Shizuoka, Japan) were individually housed in cages. The animal room was maintained at 23 ± 1 °C with 50 ± 5% humidity and illumination from 09:00 to 21:00. All animals were treated in accordance with national guidelines for the care and use of laboratory animals (Notification of the Prime Minister’s Office of Japan). The Animal Experimental Committee of The University of Tokyo approved all experimental protocols (approval no. 29–10).
During a 7-day acclimation period, the rats were allowed free access to water and a diet based on AIN-93 M formula. All animals were acclimated to the swimming exercise for 10 min per day for 4 days before being divided into the following three groups, matched for body weight and food efficiency. One group was continued on the AIN-93 M diet (CON group; n = 7), and the second and third groups were fed ketogenic diets containing LCTs (LKD; n = 7) or MCTs (MKD; n = 7), respectively. Table 1 and Table 2 show the compositions and fatty acid compositions, respectively, of each diet. Half the rats in each group performed a 2-h swimming exercise, 5 days a week, for 8 weeks (EX-CON; n = 7, EX-LKD; n = 7, EX-MKD; n = 7). Seven rats swam simultaneously in a barrel filled to a depth of 45 cm and with an average surface area of 230 cm2/rat. The temperature of the water was kept at 35 ± 1 °C during the swimming exercise.
All the rats were allowed ad libitum access to the experimental diets, and their food intake and body weight were recorded every second day. During the 8-week intervention, approximately 50-µL blood samples were collected from the tail vein using a heparinized microhematocrit capillary tube (Thermo Fisher Scientific, Waltham, MA, USA) to measure plasma β-hydroxybutyrate (βHB) and free fatty acid (FFA) levels at weeks 3, 4, 6, and 8. Collected blood samples were immediately separated into plasma and hematocrit by centrifugation (5 min at 10,000 rpm). Plasma samples were stored at −80 °C until analysis.
In a preliminary experiment, we confirmed that MKD elevated plasma βHB concentrations in sedentary rats to a level similar to that induced by LKD intake. Additionally, the group fed a large amount of MCTs was excluded from the present study because we found that intake of MCTs at levels equivalent to the intake of LCTs prescribed by the LKD treatment induced a remarkable reduction in food intake together with weight loss.

Following the last training session (>20 h after the last bout of exercise), rats were sacrificed under anesthesia with isoflurane. The epitrochlearis and triceps muscles, which are mainly recruited during rat swimming exercises [26], and liver were quickly dissected out, promptly frozen in liquid N2, and stored at −80 °C until analysis. Intra-abdominal fat (the epididymal, mesenteric, and retroperitoneal fat pads combined) was removed and weighed.

Data are presented as the mean ± standard error of the mean (SEM). Statistical analyses were performed using two-way analysis of variance (ANOVA) to examine the effects of diet and endurance exercise training. If significant interactions or main effects of diet or endurance exercise training were observed, the Tukey–Kramer multiple-comparison test was performed to examine the differences among groups.

As a small, polar molecule, βHB is utilized in extrahepatic tissues such as skeletal muscle, heart, and brain tissues. Once taken up by those tissues, βHB is converted to acetoacetyl-CoA for use as an energy substrate in mitochondria by OXCT, whose expression level is thought to reflect the ketolytic capacity of tissues [29].
A main effect of endurance training on OXCT protein expression in epitrochlearis muscle tissue was observed, with the EX group having significantly higher expression compared with the SED group (Figure 3). Moreover, a significant main effect of diet on muscle OXCT expression was observed. The LKD group had significantly higher OXCT protein content in epitrochlearis muscle tissue than did the CON group. A further significant increase in muscle OXCT expression was observed in the MKD group, resulting in significantly higher OXCT content compared with the CON and LKD groups.

To evaluate fatty acid oxidative capacity in skeletal muscle, we measured protein content of βHAD, which is a key enzyme in fatty acid β-oxidation and has been shown to be significantly associated with fatty acid oxidation rate during exercise [30].
While a positive main effect of diet or endurance training on muscle βHAD protein content was observed, their interaction was also statistically significant (Figure 4). A subsequent post hoc test revealed that the protein expression level of βHAD in epitrochlearis muscle tissue of the EX-LKD group was significantly higher than those in the other groups.

Previous studies have demonstrated that extremely low-carbohydrate, very high-fat ketogenic diets reduce the capacity for glucose oxidation in skeletal muscle via upregulation of PDK4 content, which phosphorylates and inactivates the pyruvate dehydrogenase complex [18]. Therefore, we evaluated PDK4 protein content as a marker of negative regulation of glycolytic flux.
A main effect of diet or endurance training on muscle PDK4 protein content was observed (Figure 5). Moreover, a significant interaction between diet and endurance exercise training was also observed for PDK4 protein content in epitrochlearis muscle tissue. In both the SED and EX groups, LKD intakes induced a substantial increase in PDK4 protein expression in epitrochlearis muscle tissue. Moreover, muscle PDK4 protein level in the EX-LKD group was significantly higher than that in the SED-LKD group. On the other hand, such an increase in PDK4 protein content was not observed in either the SED-MKD or EX-MKD groups.

This study was funded by the Nisshin OilliO Group, Ltd., Tokyo, Japan.

The authors declare no conflict of interest. The sponsor had no role in the design, execution, interpretation, or writing of this study. 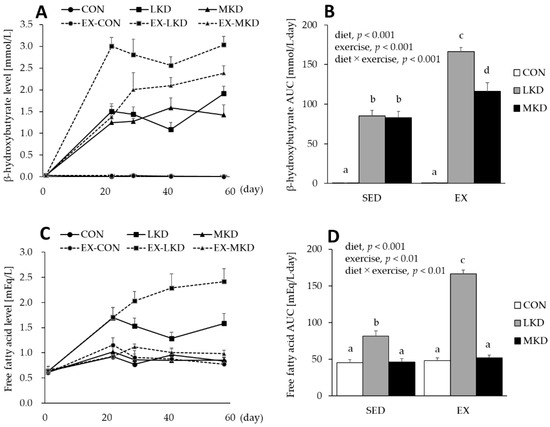 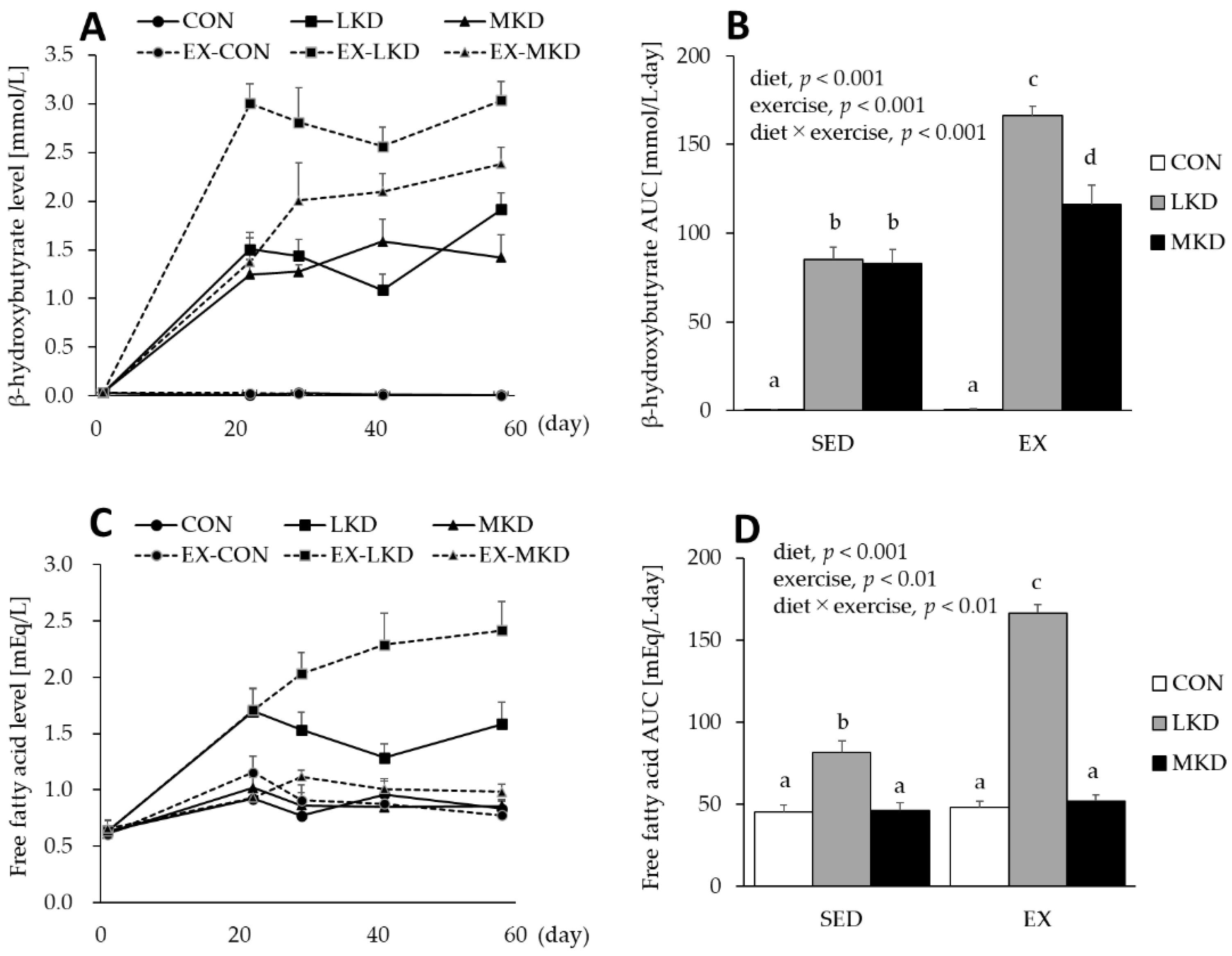 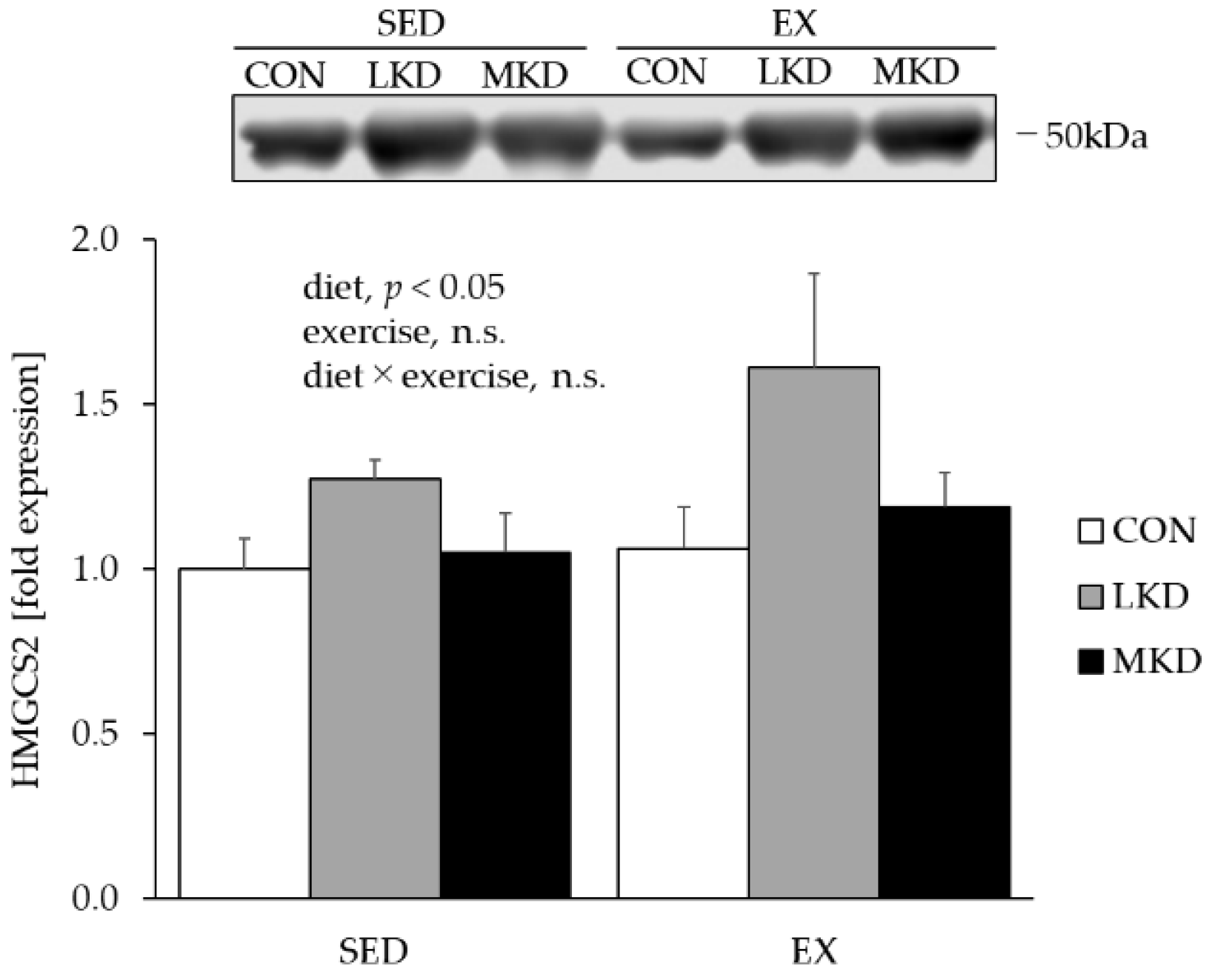 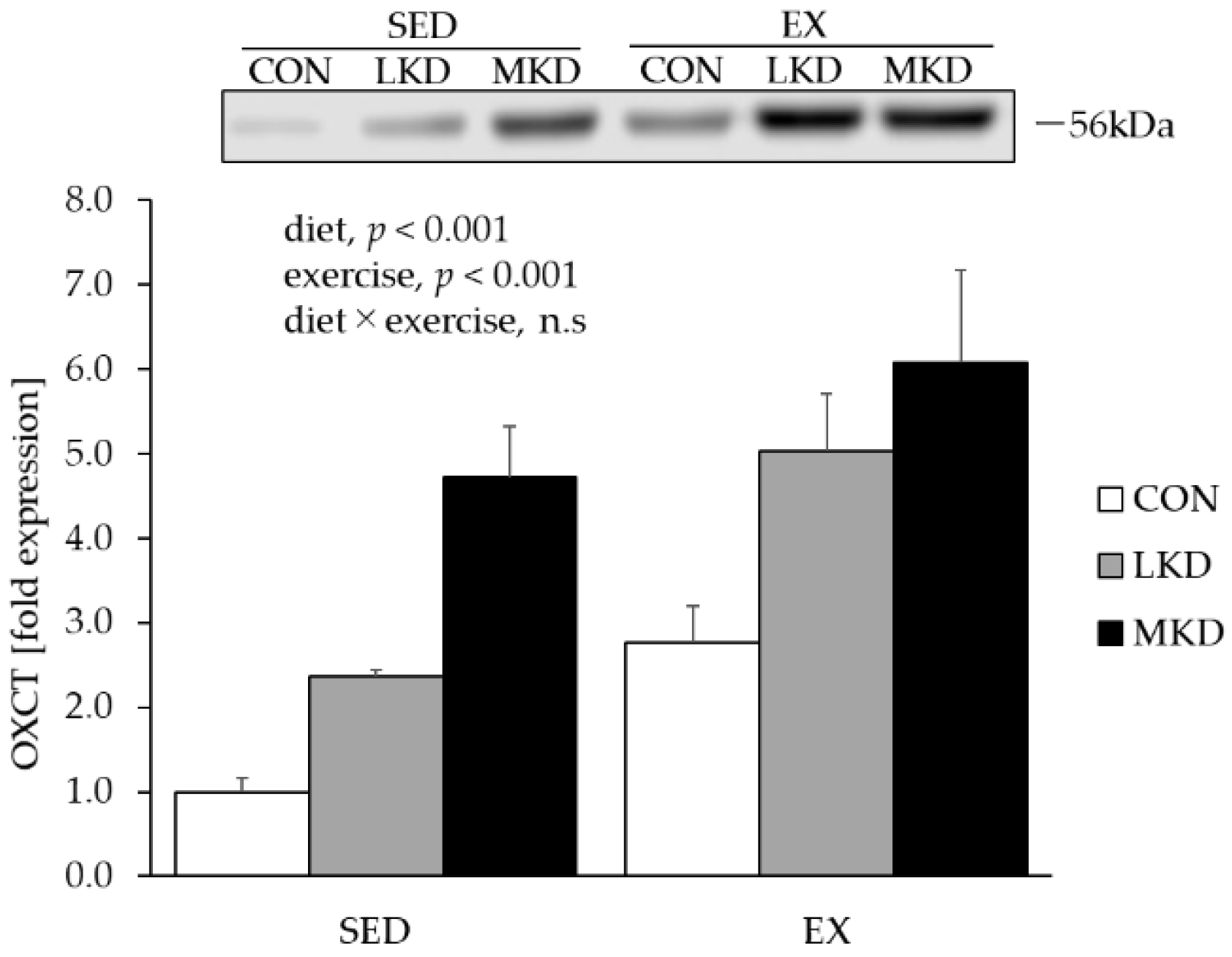 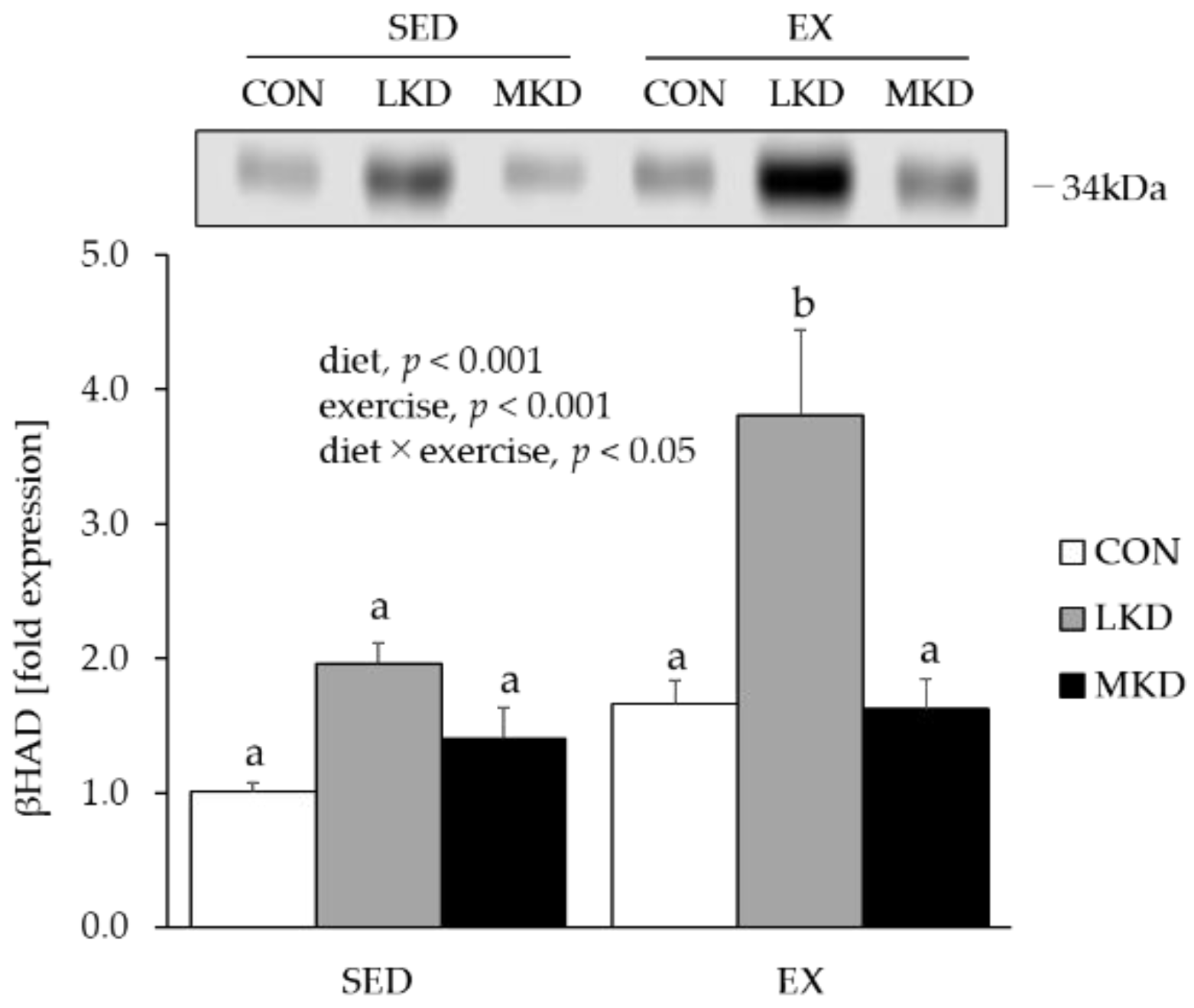 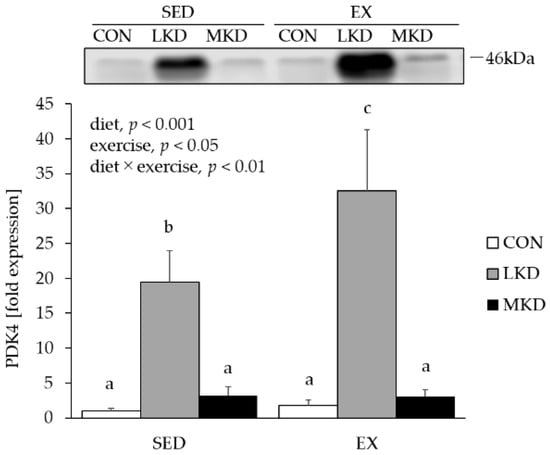