Selenium is a micronutrient which is found in many foods, with redox status modulation activity. Our aim was to evaluate the effects of two chemical forms of selenoamino acids, Seleno-L-methionine and Seleno-L-cystine (a diselenide derived from selenocysteine), at different concentrations on cell viability, hydrogen peroxide production, antioxidant enzymes, UCP2 protein expression, as well as lipid and protein oxidative damage in MCF-7 breast cancer cells. Results showed that Seleno-L-methionine did not cause an increase in hydrogen peroxide production at relatively low concentrations, accompanied by a rise in the antioxidant enzymes catalase and MnSOD, and UCP2 protein expression levels. Furthermore, a decrease in protein and lipid oxidative damage was observed at 10 µM concentration. Otherwise, Seleno-L-cystine increased hydrogen peroxide production from relatively low concentrations (100 nM) to a large increase at high concentrations. Moreover, at 10 µM, Seleno-L-cystine decreased UCP2 and MnSOD protein expression. In conclusion, the chemical form of selenoamino acid and their incorporation to selenoproteins could affect the regulation of the breast cancer cell redox status. Taken together, the results obtained in this study imply that it is important to control the type of selenium-enriched nutrient consumption, taking into consideration their composition and concentration. View Full-Text
Keywords: selenomethionine; selenocysteine; oxidative stress; antioxidant enzymes; ucp2; oxidative damage selenomethionine; selenocysteine; oxidative stress; antioxidant enzymes; ucp2; oxidative damage
►▼ Show Figures 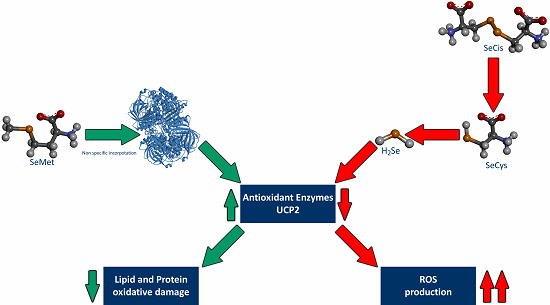